The Hope Trade Returns Though Severely Stunted As It Should Be

The Hope Trade Returns Though Severely Stunted As It Should Be

All it takes are the words “record high” and all economic or financial sins are forgiven and forgotten. The financial media cannot contain themselves whenever they get the chance to use the term, adding qualifications like “soar” and “sharply” to make sure everyone gets the message. Context need not apply because stocks are supposed to be forward-looking discounting mechanisms.

However, even a small bit of background dispels the sentiment. Dating back to especially QE3, the stock market had been trading on only the economy that “will be” not the growth environment that actually was. We know that given the behavior in prices as they diverged sharply with actual earnings, all on the premise that forward earnings were solid and reasonable based on QE actually working. That was already a somewhat shaky premise in 2013, but by the middle of 2014 it was increasingly negated. Where $140 in EPS for the S&P 500 was expected in CY2015, only $86 occurred.

Yet stocks have only traded sideways with increasing volatility; there has yet to be an adjustment to EPS or a more realistic assessment of the global economy apart from that. If 15 times earnings applies to a relatively robust earnings growth environment, what multiple should be assigned to more unsatisfactory growth? Or slow and steady economic contraction? Record highs in the context of this re-evaluation take on an entirely different connotation.

It starts and ends with stocks still trading on the economy that “will be”, though now downgraded to the economy that hopefully “might be.” Especially in the past few days of resurgent optimist perhaps related to Japan, buying interest seems to be at least a taste of what once was. It isn’t so much that the Bank of Japan will do whatever it will do, rather it is the fantasy that whatever the BoJ does is the opening round of global central banks finally finding the magic number (or policy format) that unlocks the full “will be” economy. We know this is nothing but hope because there is no reasonable basis for the expectation; central banks and monetary policies have uniformly failed in such universal, widespread fashion (economy and monetary) as to leave no doubt. 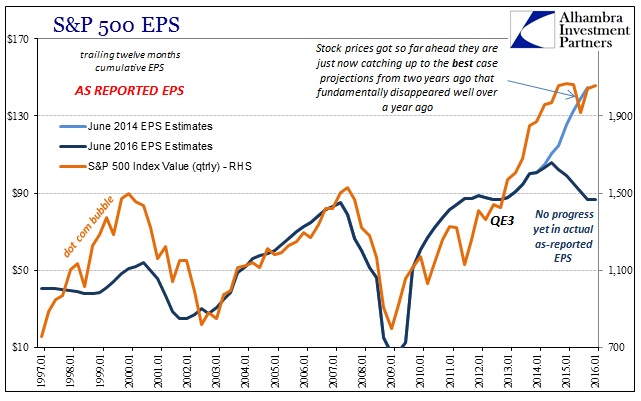 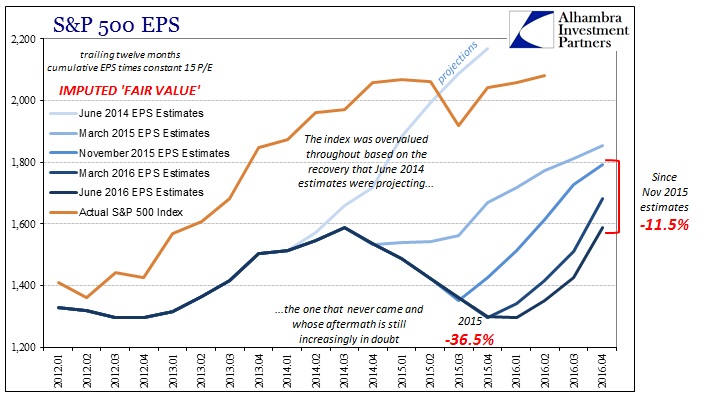 Though the S&P closed at a new record high today, it represents only a 1 year gain of 2.5% and relative performance far more aligned with this kind of uncertain environment. That is the best view of stocks, as other indices have actually underperformed. Notably, and I think importantly, the S&P 500 Buyback Index is down almost 5% in the same 1 year period, and down almost 9% since its high in February 2015 – all despite the current rally from the lows of February 11.

The broader NYSE Composite also continues to be unfavorably situated, down 2% in the 1 year period and almost 3% since February 24 last year. Worse, for the 2 year period through today, the index is also down 2.4% meaning that the broader market has gone nowhere for several years now – all coincident to the appearance of the “rising dollar” that spoiled the hope. 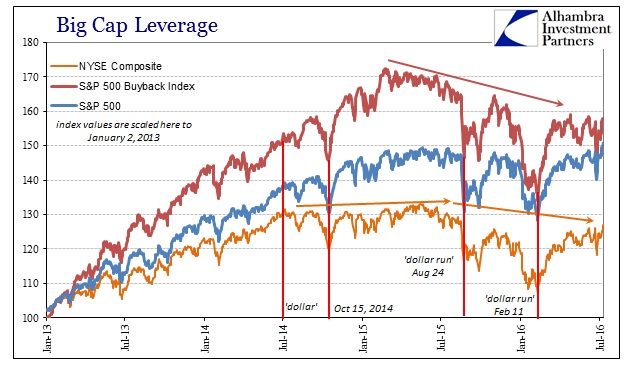 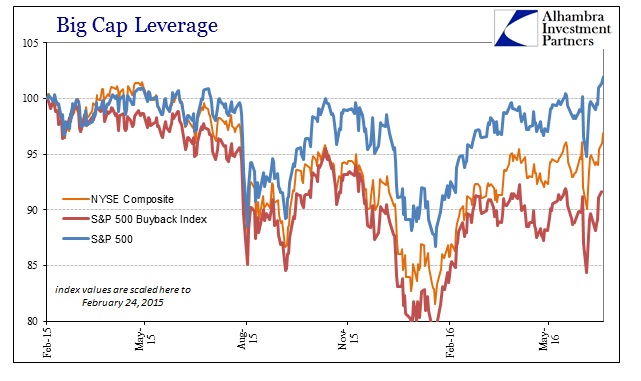 Focusing on the S&P 500 and its new highs is therefore misleading. That is especially true in comparison to “risk off” assets such as gold or US treasuries. The longer UST bonds or bond funds are up more than 20% in both the 1 and 2 year periods, while the intermediate part of the UST curve is up about 8% and 9%, respectively. 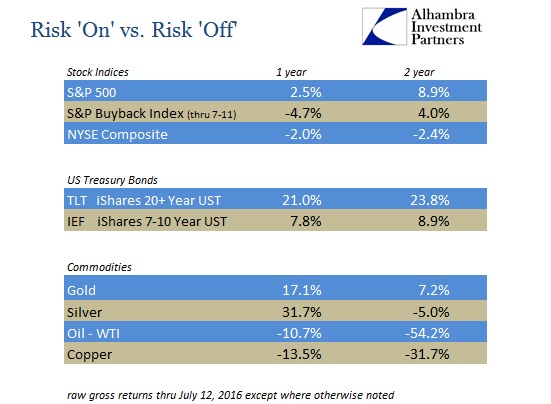 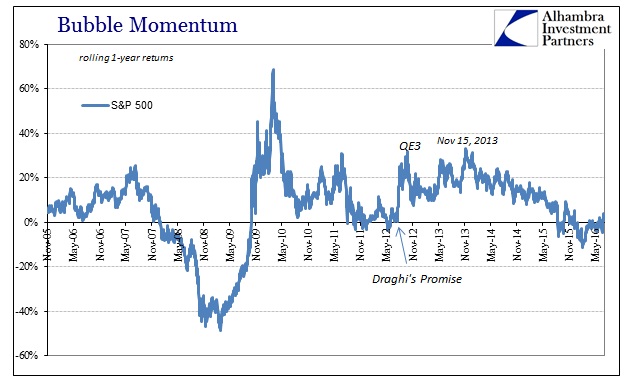 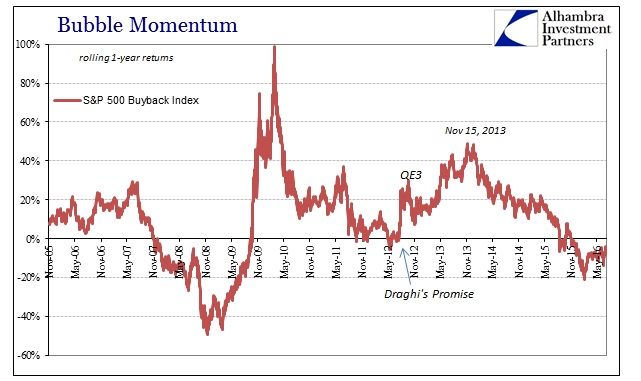 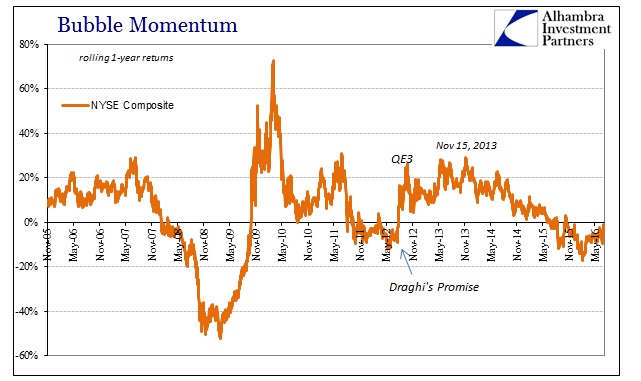 This more comprehensive review is more consistent with growing uncertainty rather than the narrow trumpet of “record highs.” Because of that, attention will focus, once emotion subsides, toward valuations and the real economic climate that will ultimately determine them. Even if you don’t think there is any recession danger, any realistic assessment of the current economy does not support either central banks suddenly getting it right nor high earnings multiples (regardless of where interest and discount rates lie). This more schizophrenic behavior is actually fundamentally more consistent with the economy as it is, casting off if in only discrete periods (of monetary “tightness”) the once-immutable faith in the economy that “will be.” In other words, these more wild swings between hope and despair are what actually matters – indicating the “market” wrestling with its own disappointment as if in one or other of the five stages of grieving.

Old habits, and myths, die hard, so in some ways you can’t blame investors or the media for trying to recreate the “fun” and thrill of 2013 and the days before global QE was so thoroughly disproven. The reality of the “rising dollar” and the big risk of forward earnings (and the future economy they were supposed to represent) still has not been resolved. At various times over the past two years, stock prices have continued to intermittently shift toward believing again but that was and is nothing like what it once meant. Though the S&P did hit a new record high, it is still fair to conclude that overall stocks really aren’t buying it.