People are often mistaken for thinking the eurodollar is somehow related to the euro, but that is in many ways quite understandable. In reality, the eurodollar system is shorthand for a global, offshore monetary regime that is dominated by “dollars” but includes every major currency. Thus, the participants in these currency markets are usually the same banks, meaning that if there is trouble in Europe and euros (or euroeuros) you can bet (literally) on finding it also in eurodollars. The eurodollar is like dollar, but in many important respects it is inseparable from euro as all of it is cobbled together by bank balance sheets from all parts of the globe.

The Northern Rock Building Society was founded in July 1965 as a merger between two relatively primeval, British financial firms. These are cooperative savings groups that sprung up in the 18th century in England, similar in mission and framework as credit unions or certain S&L’s in the US. Financial growth into the 1960’s had pared back the number of building societies in competition with the (reborn) growing English banking system. Following the merger, the combined firm set about on a buying spree, adding another 53 building societies to its banner over the next few decades.

It was in the later 1990’s, however, that Northern Rock became so distinguished; it was the first UK bank to embrace (enthusiastically) the financial innovation of securitization. By 1997, the company realized that the expansive business model would be better served by converting from a private building society to a public limited company, floating shares and entering the relatively new and exciting world of global money markets. Deposits were and are a serious constraint; wholesale money seemed at the time an invitation toward the infinite.

In 2001, Adam Applegarth took over and began an even more aggressive growth campaign. At its heart, Northern Rock possessed one key advantage – information. The public bank had developed one of the most efficient technology foundations in the business, a vital asset in the wild world of math-as-money. It started closing branches and encouraging its customers to use electronic communications and transactions methods exclusively. The bank used its competitive position to offer consistently lower cost mortgages, which were highly attractive to UK independents who sent the firm about 95% of its volume during the height of the bubble.

By the start of 2007, the former sleepy building society was writing about one-fifth of all new mortgages in the UK. Despite signs of distress in not just mortgages and housing markets but really the global money markets that fed them, Applegarth was still pushing for 20-25% growth in 2007. What had gone unappreciated and almost totally unnoticed was the hubris of “low cost” in wholesale terms; meaning that in addition to streamlining operations and keeping physical costs of Northern Rock low, the bank had also extended this “all or nothing”-like approach to funding. Unlike its UK competitors, the bank’s liability side was proportionally far more exposed to rollover risk.

The bank lingered on through the whole crisis, receiving various government aid after having attained the very dubious distinction of being the first British bank since 1866 to suffer a public bank run. Ironically, the run itself was in many ways propelled by the Bank of England who gave Northern Rock public assurances in September 2007 to suppress fears; it would not end until September 17, when British taxpayer money was grudgingly pledged to make all depositors fully whole no matter what.

Shortly thereafter, Northern Rock sold £2.2 billion in MBS to JP Morgan to help pay back loans to the Bank of England, at the same time the British government announced plans to convert £25 billion in government lending into longer dated bonds. These were measures designed to improve the private takeover profile of Northern Rock, as the government fully intended (at least publicly) only to aid the firm in finding a suitor; Richard Branson’s Virgin Money group was among those submitting a bid. Despite all that, Virgin was spurned and the bank was nationalized on February 21, 2008.

Virgin would eventually take control but not until November 17, 2011. It ended the amazing saga of a bank that was entirely too typical of that era. But if we are interested in determining Northern Rock’s true date of death, that would be August 9, 2007. As CEO Applegarth himself claimed later that year:

The world stopped on August 9. It’s been astonishing, gobsmacking. Look across the full range of financial products, across the full geography of the world, the entire system has frozen.

And it has never been unfrozen; dollars, euros, sterling, francs, etc., etc. The wholesale morass represented by the eurodollar standard of global reserve status has never been the same, broken that day in permanent fashion. One of the primary symptoms of it has been, as I described yesterday, the sudden and stark exposure of seasonality – both markets and economy. With an increasingly deficient global wholesale monetary system “supplying” less and less virtual, offshore wholesale money equivalents, these bottlenecks have appeared over and over again. It started in 2007 itself, setting up a pattern of behavior that would be most heavily exhibited in years where eurodollar function (in all currency forms) was most problematic.

In 2007, the year following the top in the housing bubble (really eurodollar bubble), both the economy and financial system started in very familiar fashion (to today’s world). GDP plunged to (current estimates after many revisions and benchmarks) barely positive in Q1; liquidity had deteriorated in wholesale channels, particularly CDS and related ABX pricing to the point that two hedge funds run by Bear Stearns had to be “rescued.” Despite the rough start to the year, by midyear things looked much, much better. GDP rebounded to 3% by Q2, and markets were seemingly shaking off any deeper concerns though wariness remained. At the end of March, Ben Bernanke told the world (via Congressional testimony) that subprime was contained and for a few months in the spring it looked like he might have been right.

Just after the start of Q3, however, fissures again appeared, culminating in the systemic break of August 9. That unleashed a rising tide of illiquidity and disorder that would characterize the entire rest of the year (even stocks couldn’t ignore it beyond October). The monetary “tightness” of the wholesale system would spill over into the start of 2008, another weak annual beginning, with a crescendo in mid-March and the failure of Bear Stearns.

Then, just like the year before, the seasonal turn to spring seemed to bring about a stunning rebound, increasing, on the surface, the potential for maybe even complete escape from the whole affair. GDP, which had contracted in Q1, jumped in Q2 alongside fiscal “stimulus” from the Bush administration. By June, Bernanke was in Massachusetts claiming, “the risk that the economy has entered a substantial downturn appears to have diminished over the past month or so.” Like his 2007 statement, for a time it appeared to be very possible.

Once again, however, everything changed in the growing heat of summer. Indymac shockingly failed on July 11, 2008, followed two weeks later by sudden interest from the SEC in short selling of GSE’s and primary dealer banks (leading to a ban of it). The rest was, as they say, history.

What was it about each midyear that seemed to perform an almost unbelievable inflection? To be completely fair, that wasn’t necessarily the case, as illiquidity and systemic disruption remained consistent underneath even the spring rebounds, but there is no arguing that monetary “tightness” broke out into the open each summer in sharp contrast to mainstream hope that prevailed just months or weeks before. Illiquidity was prevalent throughout, but at each midyear that seemed to somehow alter in behavior and even fuller context. 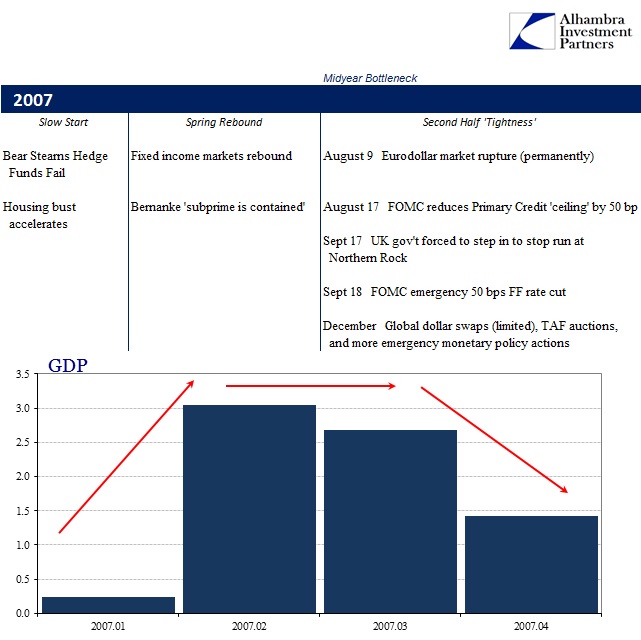 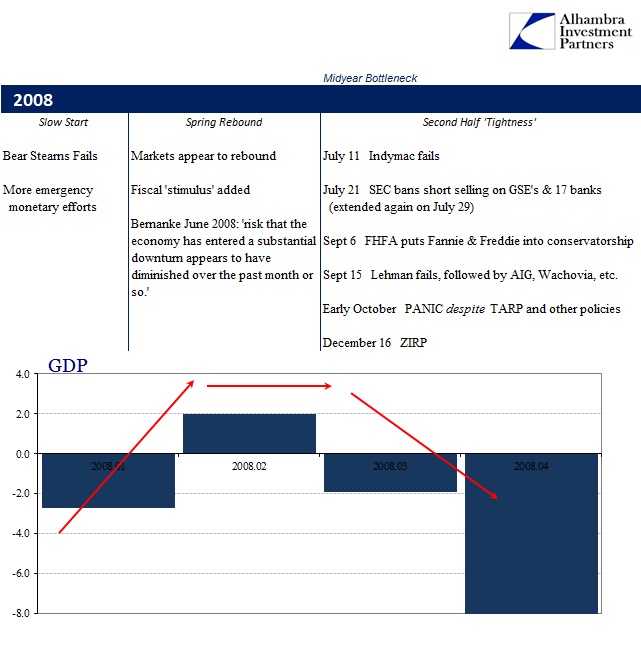 Two times is a very compelling argument for illiquidity exposing underlying seasonality, but five times is a pattern (with 2016 so far acting a sixth to this point). 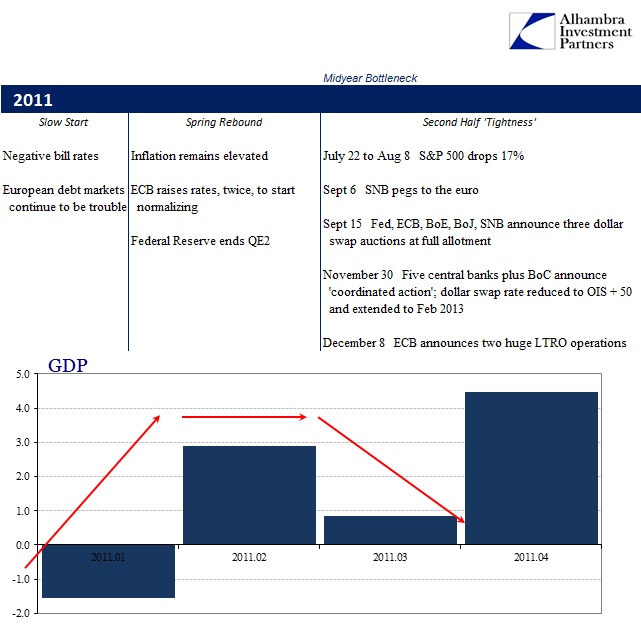 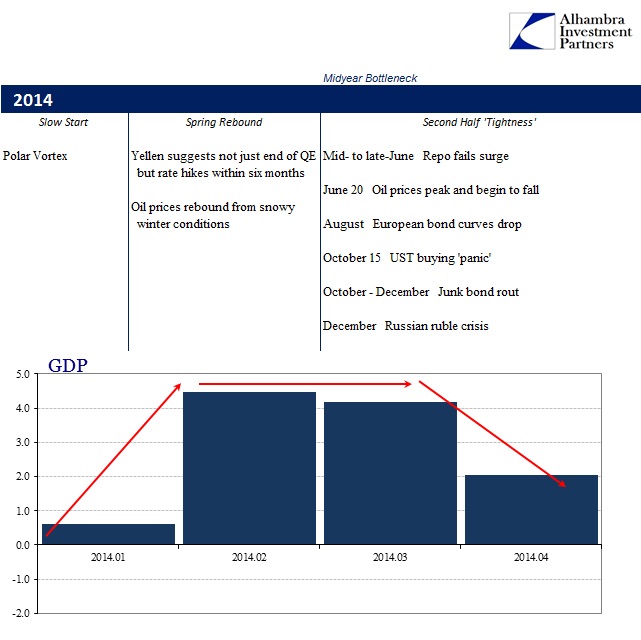 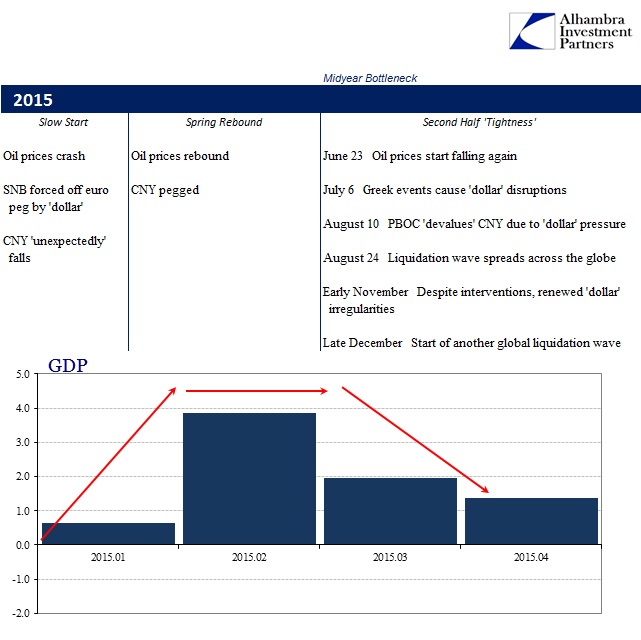 These are obviously incomplete catalogs of all events that took place in each respective year, but they are, I believe, a representative sample of this repeating template: weak start, spring rebound, summer “tightness” that takes up the remainder of the year and spills into the next. The prevalence of changes in especially financial behavior each July and August is striking, giving a new “dollar” spin to “sell in May and go away.”

We are conditioned to look at things in straight lines; we are even told that history is linear. This is simply not the case, as cyclicality is encoded in our DNA by the most basic processes of astrophysics and planetary motion. I have to believe what you see here is quite a bit more than ancient biases protruding into modern life, but overall it makes perfect sense to find drastic seasonality; especially under conditions of monetary illiquidity and tightness that has the effect of amplifying even natural pressure points.

While this iterating behavior had a direct impact on the mistakes of the Great Recession, it may be even more important in the years after it. In other words, economists and policymakers are looking in straight lines for straight-line events like recession. These seasonal patterns, however, argue instead for a far different kind of analysis. By virtue of all the ups and downs, there is an unevenness to them that looks like nothing but noise from the linear perspective; economists can’t understand or define the seemingly random swings between weakness and strength. So abhorrent is it to the mainstream assumptions, they have even reacted by attempting to adjust basic statistics like GDP to try to erase it (residual seasonality).

From the monetary perspective joined to the calendar, however, we find a single process wound up in all the repetitions. Again, it was compelling the first two times; three or maybe even four more cannot be coincidence.