Corroboration Under the ‘Rising Dollar’ Economy

Corroboration Under the ‘Rising Dollar’ Economy

Last week, the American Bankruptcy Institute (ABI) released its updated statistics for commercial bankruptcies through June 2016. For yet another month, bankruptcies jumped by 30% over the same month in 2015. Total commercial filings were 3,294 in June, compared to 2,442 in June 2015; Chapter 11 filings were up 36% year-over-year. The turn in apparent liquidity and business struggles occurred at the end of last summer and into the autumn. Though the energy sector is prominent in the inflection, it is noteworthy that the ABI singles out one other particular industry:

“As economic challenges continue to weigh on the balance sheets of struggling companies, especially those in energy and retail, more businesses are seeking the financial fresh start of bankruptcy,” said ABI Executive Director Samuel J. Gerdano. “Commercial bankruptcy filings for 2016 will likely total close to 40,000.”

Announced job cuts in the retail sector at the beginning of the year seemed to confirm the growing distress. Though layoffs have come down over the past few months, there remains a divergence between what these figures suggest and the BLS employment numbers for the industry. According the payroll statistics, employment in the retail sector paused only for two months in April and May, with no net gains. Rather than signal a change in economic behavior, however, it was as likely a regular statistical variation; there was a similar 2-month pause recorded for last August and September. 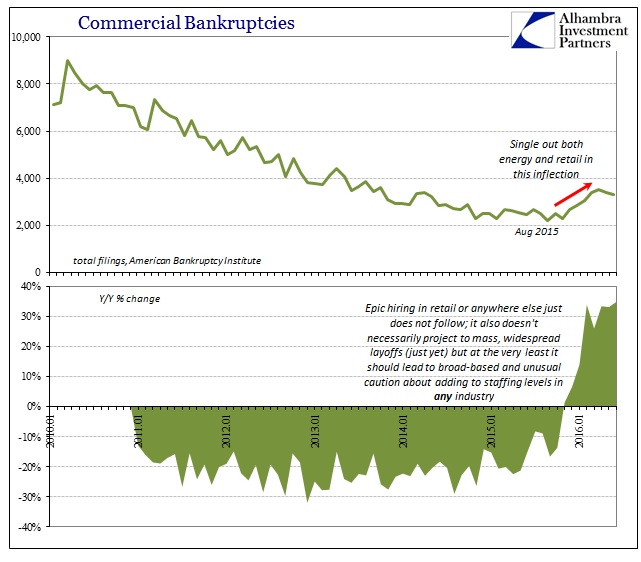 The pace of expansion is far out of line with what we find in so many other accounts – including retail and wholesale sales (and inventories on both levels). For an industry that might be struggling to the point of increased bankruptcies, the government figures that employment in the industry is unrelated to the possibility. For the most part, the BLS continues to suggest hiring without any serious break apart from the typical statistical variations.

Worse, this divergence dates back to the 2012 slowdown. Plotting BLS estimates for payrolls in the retail industry against the Commerce Department’s estimates for retail sales (ex autos), factoring a 7-month lag for employment levels to align with changes in topline sales, we find a large difference dating back to 2012 and early 2013. The economy in retail sales and throughout industry and manufacturing clearly slowed at that time, but somehow there was no break in the employment trend. 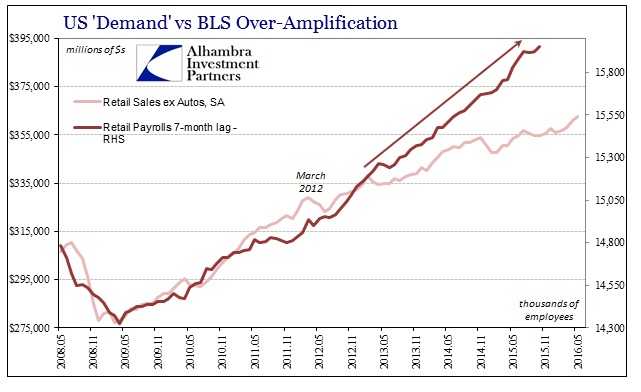 And this difference has been extended somewhat into wholesale trade. Overall, payrolls in the wholesale level of the supply chain have underperformed retail employment, thus leaving the trend in wholesale jobs closer to the performance of wholesale sales for longer. Even then, however, there is a clear divergence between sales and employment only now dating to the “rising dollar” period and its economic inflection. 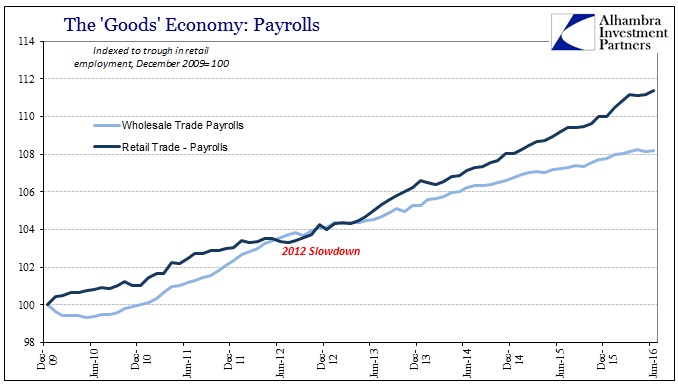 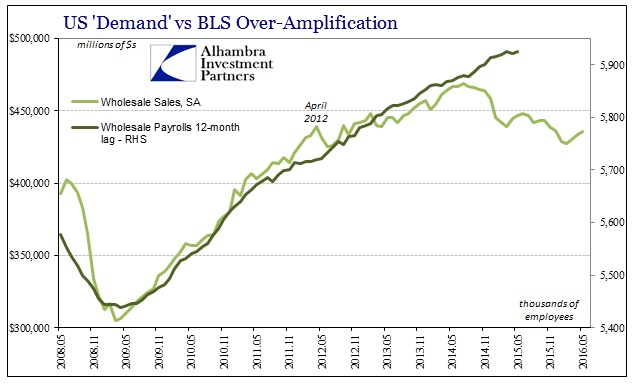 As you can see on both charts above, the wholesale sector even in the employment data picks up, to a significant extent, the 2012 slowdown where the retail segment does not. Overall, that places the BLS’ wholesale industry estimates much closer to the trend in sales – but only until the middle of 2014 (lagged by a full year). In other words, as wholesale sales began to fall off around July and August 2014, we should have expected to see that begin to impact employment in wholesale trade by the summer of 2015; it hasn’t happened as instead the BLS continues to suggest nothing different about the past few years.

It’s an odd result, especially given that the BLS somehow captured the trend change in 2012-13 specifically in the wholesale industry. It also doesn’t matter if we control for oil prices and wholesale sales of oil; the once-tight correlation between wholesale sales ex-petroleum and wholesale payrolls still broke down in obvious fashion in 2014. 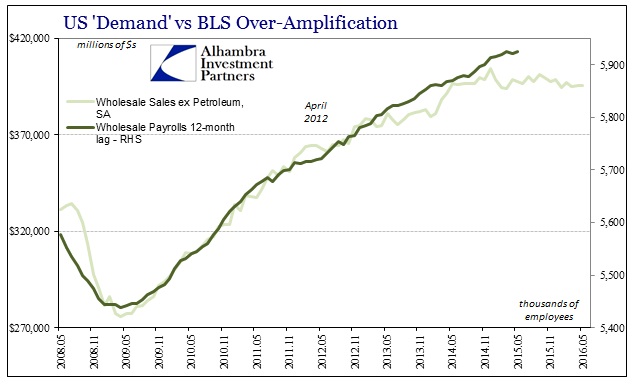 This separation of sales to employment recalls in some sense the issue of inventory, though it would be hard to imagine a case where businesses in retail or wholesale are hiring based entirely upon holding more inventory while shipping fewer goods and receiving less revenue for them. Retail inventories as well as wholesale (both with and without crude oil) are as high, in proportion to sales, as the Great Recession. 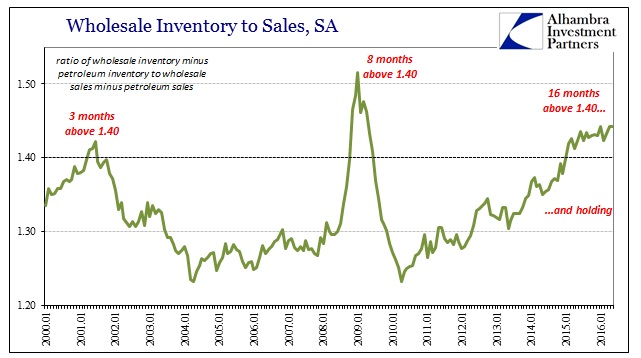 Drastically elevated inventory levels and holding that way, representing straight away a deeper financial commitment, would make sense in terms of rising bankruptcies. Continued, uninterrupted hiring does not.

We are left, then, with several unexplained oddities that are in some ways contradictory. The BLS measures an effect of the 2012 slowdown in wholesale trade, but not retail. Despite finding the inflection in 2012, the BLS then doesn’t see one in 2014 even though this later “bend” was even more prominent and pronounced (especially on the wholesale level) than the 2012-13 original. That is the case even more than a year later when beyond all probable lags a change in sales, both retail and wholesale, would have begun to greatly affect trade businesses. The inclusion of the bankruptcy statistics only further suggests that such disruption did take place, meaning that there is every reason to expect to also find it in the BLS payroll numbers.

In my own view, I have to believe that the nature of this “cycle” is still the most likely explanation. It is not recession, so the BLS statistics continue to treat it as a typical, if slow, growth period – when by all these other counts it is not, especially under the “rising dollar.” That still doesn’t account for why the wholesale jobs estimates slowed in response to 2012 when retail employment did not. Perhaps that is just the general statistical difficulty in trying to apply processes that don’t really apply to these conditions.

I think that is the overall point and purpose of this review; that “something” has taken place in the past nearly two years, but that there is no decisive way to truly figure out exactly what it was, and continues to be. Since the bankruptcy numbers are taken from actual court filings rather than sampled surveys, they again suggest that “something” is very real. The fact that it further conforms to the sales figures further indicates both economic as well as financial pressure – adding in the nature of inventory commitments. That leaves the employment figures to be accountable only to themselves, which is a serious problem under any circumstance.

Corroboration is an important element in any analysis, as no statistic should ever be given full faith at face value. However, the nature of this economy and whatever it is that is occurring places even greater emphasis on a more holistic assessment. Again, there is a great deal of evidence that “something” is very wrong possibly unrelated to any business cycle, and very little evidence, chiefly isolated, that indicates the economy is just sailing along mostly undisturbed by mysterious and transitory “headwinds.”