Economics of the Second Wave

Economics of the Second Wave

There is a core fallacy at the heart of monetary policy (actually there are many, but I’ll keep it to just this single instance for the sake of brevity), one that was exposed by Milton Friedman himself, though indirectly and quite accidentally related to how he proposed an alternate scenario for the Great Depression. His view was that the Fed by internal political interference and philosophical mistakes failed to stem the monetary contraction by failing to take account of all money. But in accounting for the unthinkable size of the contraction in money, Friedman actually delivered ab account of why it may never have worked.

From the 1920 depression throughout the rest of that decade, the public began to hold an ever-increasing amount of monetary assets in the form of deposits rather than cash. That meant the whole monetary system had vastly expanded its fraction of what Friedman calls highpowered money (though he omits gold from the category), largely physical cash. This was true not just of the public, but of banks that in the correspondent system allowed less cash to support increasing activities (including the intersection in NYC of money centers, domestic and foreign, in the form of street loans or call money that were really responsible for the great crash and calamity).

I believe it gravely understates the systemic pressure of the buildup in deposit fractions this idea that if the Fed had injected reserves into the system in large quantities in especially late 1929 and throughout 1930 that the rest of history would have been far different. It was a historical revolution in money far and above personal experience (both banking and the public) of any other point in history to that date, and thus it seems quite reasonable that the sharp counter-reaction to irregularity and uncertainly would have had occurred regardless. As Friedman notes, highpowered money grew faster in 1931 and 1932 than it had at any point in the 1920’s – and total money stock declined anyway (by an enormous amount) because the public and banks took liquidation (of deposit liabilities) as not a specific instance of panic but to rectify mistaken assumptions of the 1920’s that led them to accept “too much” (from their perspective) leeway in holding a derivative promise other than cash.

In other words, the monetary system itself was broken at least so far as it had allowed money expansion throughout the 1920’s. That might propose Friedman’s view partly right; maybe the Fed had it acted earlier and bigger (it is a myth that the Fed, as Hoover, did nothing) the crash itself might have been cushioned, but that isn’t in any way the same as avoiding the Great Depression particularly since what truly made it Great was that it lingered for more than a decade without recovery.

Even if the level of bank suspensions had been held to a fraction, it is very likely, given what did happen, that the public would not have simply ignored it and so easily returned to 1920’s views and expansions. The rate of money increase due to the increase in fractional holdings in both public hands and banking was going to shift regardless of how great the crash; meaning that the lack of recovery was truly divorced from the size of the collapse. 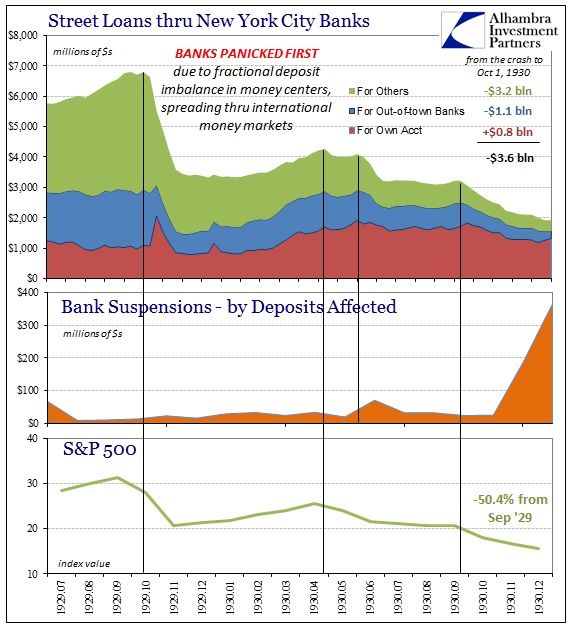 As discussed yesterday, I think that is the most relevant part of the Great Depression that seems to have found its way into the 21st century. In the eurodollar system, the fractional expansion was almost entirely virtual, but operating upon the same concepts. It is the essence of self-similarity and fractal behavior; replicating patterns on different scales, in this case virtual money as opposed to physical cash of the 1930’s. Eurodollar banks had also become too comfortable with eurodollar expansion up to 2007, even to the point of encoding that imbalance of risk into the mathematical basis for a great deal of the virtual operation.

Essentially what happened was exactly like what Friedman described in the quoted passage above. The rate of monetary contraction was far, far greater due to eurodollar bank balance sheet contraction (the fractioning) than was ever “put back” by any central bank or combinations of central bank actions. Even if we assume that bank reserves are not irrelevant and that the Fed’s balance sheet is one for one a perfect substitute, on quantity alone it was still nowhere near sufficient to offset the increasing mistrust of eurodollar activities. As I showed here, this was true in comparison just to what we could measure of the eurodollar system, meaning that the Fed’s belated monetary offset wasn’t even close to sufficient to restore visible eurodollar balances to their prior peak; leaving still that plus what we didn’t or can’t measure, and then offer growth in money beyond so that recovery would have been a realistic option. 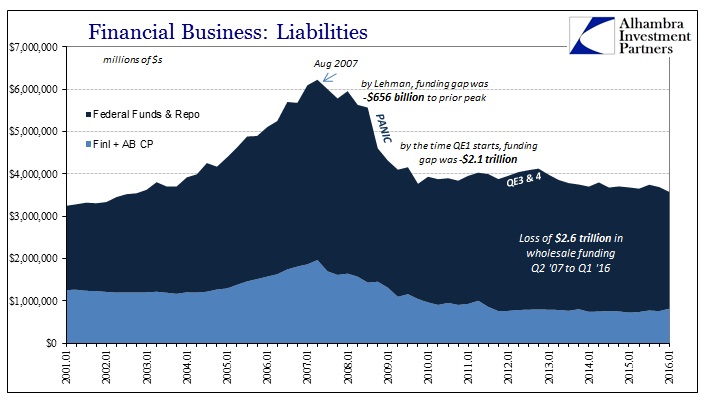 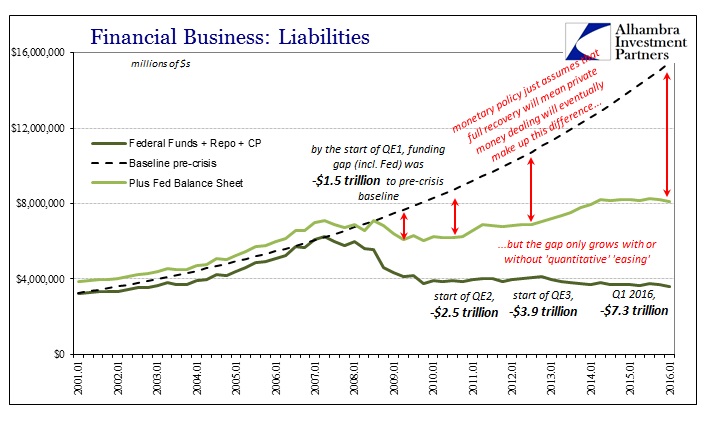 That is where the current malaise, stagnation, or even depression is found. The monetary system broke in August 2007, was only partially operating (in certain parts of bank balance sheets) after 2009 before it broke again in 2011 – this time permanently. It was the same kind of process that hit in the early 1930’s; the deposit-currency ratio according to Friedman and Anna Schwartz was steady at about 11x all through 1929 and 1930 despite the stock crash and the related, concurrent interbank contraction (call money and foreign reserves). It wasn’t until the first wave of bank panics in 1931 that the ratio started to decline, bringing down total money stock. But the real contraction occurred after the second wave of panic.

It was a permanent, systemic break that meant though the economy appeared to be recovering, it wasn’t truly a recovery. We can all relate. The two systemic breaks in the eurodollar easily demonstrate why. It is the same behavior all over again, just removed from the money the Fed and economists believe still operable, somehow ignoring the massive technological revolution everywhere else in the world, to global “money” that operates in virtual conditions well outside of their self-imposed limitations. You can plug almost any economic account into the double wave “template” shown below and they easily line up into a systemic, monetary-driven depression. A sample: 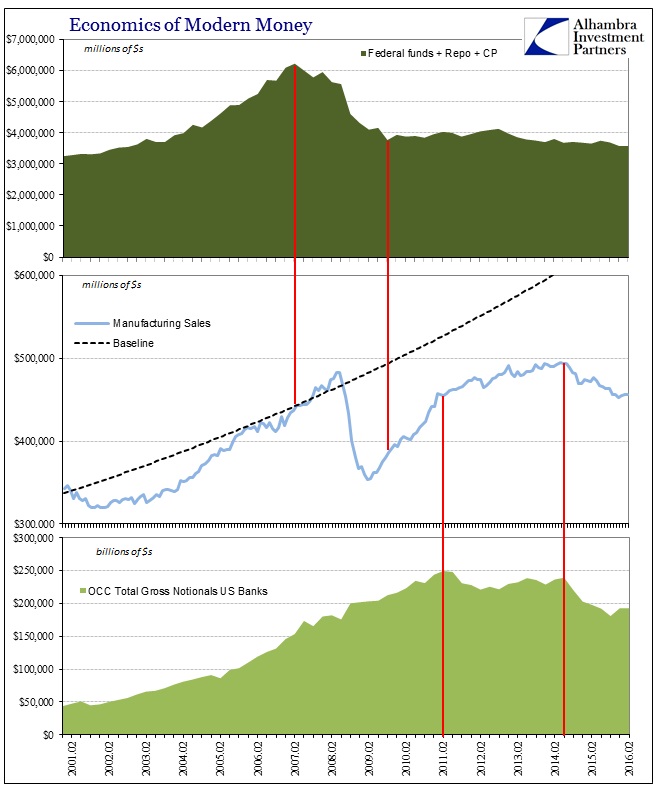 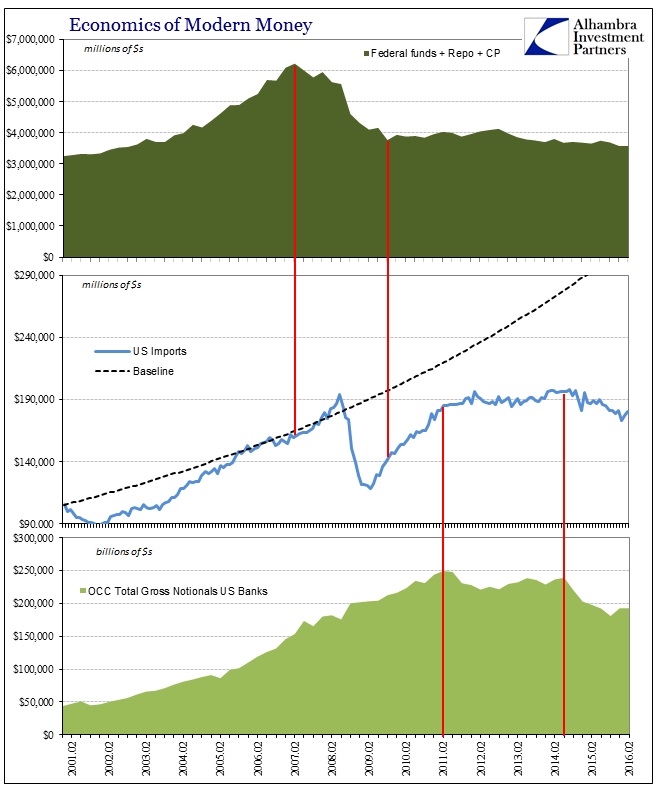 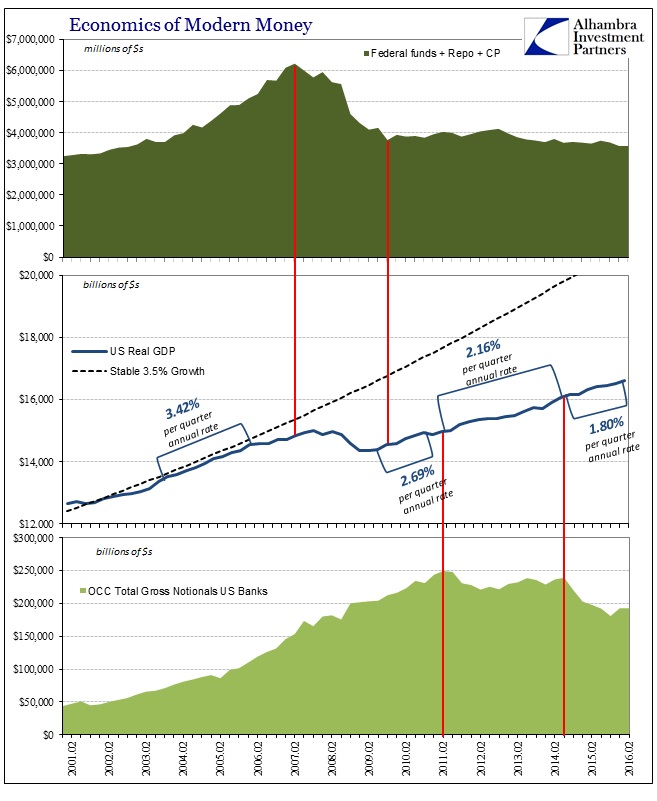 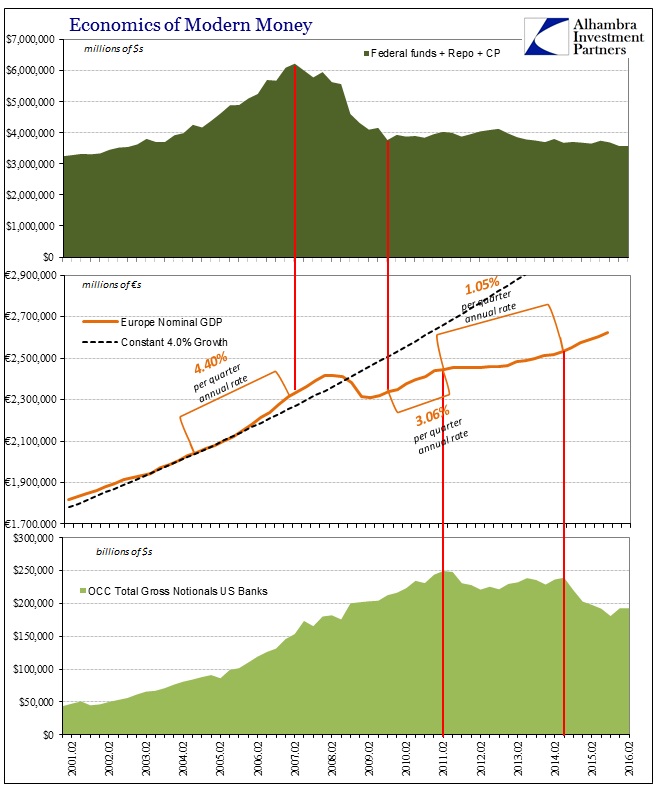 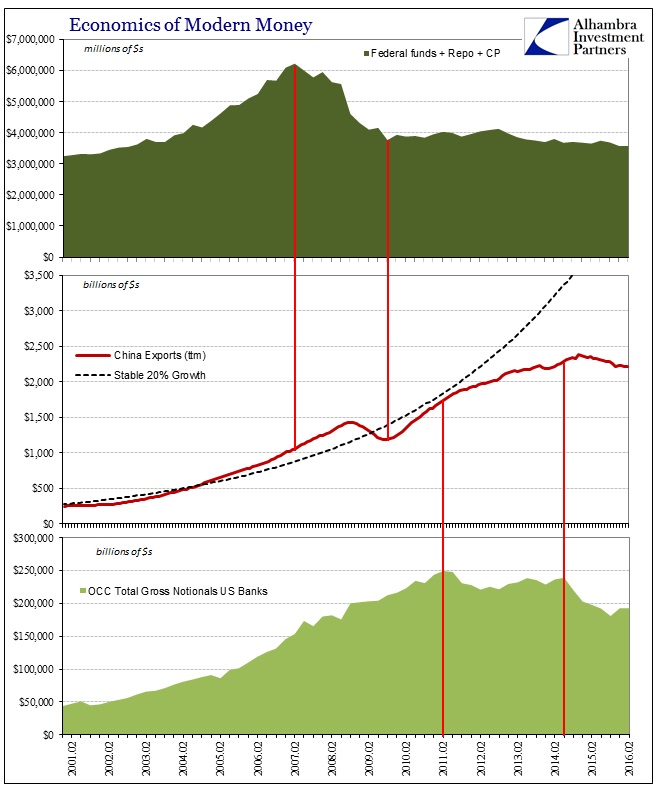 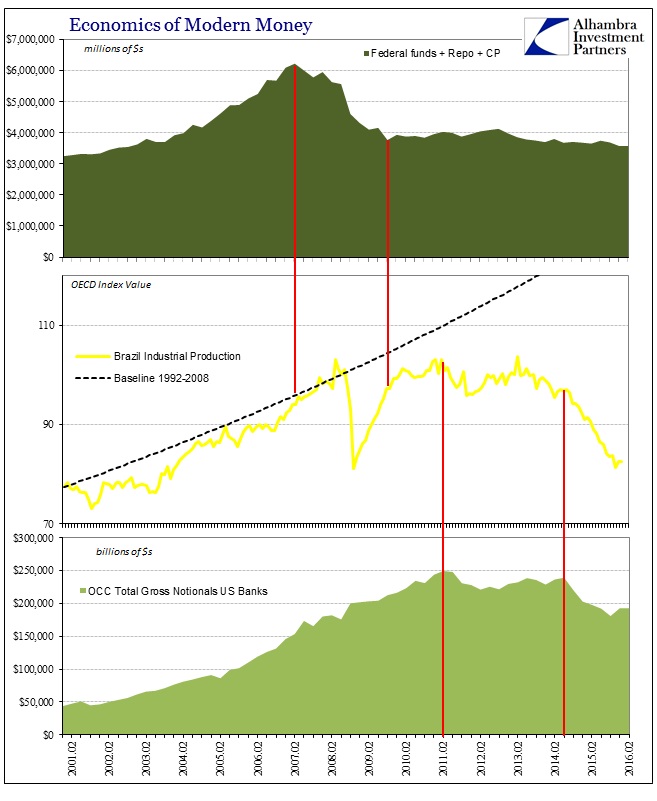