Earlier in April, analysts were projecting $26.69 in as-reported second quarter earnings for the S&P 500. By the week of June 22, just prior to the start of Q2 earnings season, that estimate had only declined slightly to $26.38. For the week of July 21, just a month later, with about one-third of companies reporting the earnings figure sank to $24.89. With now two-thirds having reported, the EPS estimate has dropped another $0.80 in just one week to now $24.09.

In terms of trailing-twelve month EPS, what was supposed to be the start of the anticipated turnaround is now really more of the same. In April, analysts were projecting $92.72 for the full four quarters up to and including Q2; it is now $87.73, not at all different than the ttm EPS of $86.44 in Q1 and $86.53 for FY 2015. The earnings recovery keeps getting pushed further into the future, especially as EPS estimates are falling there, too. 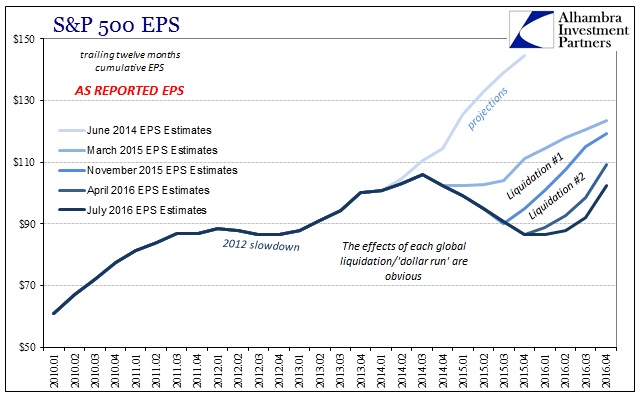 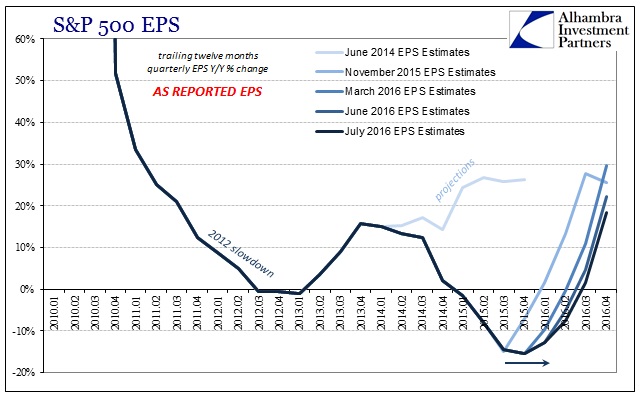 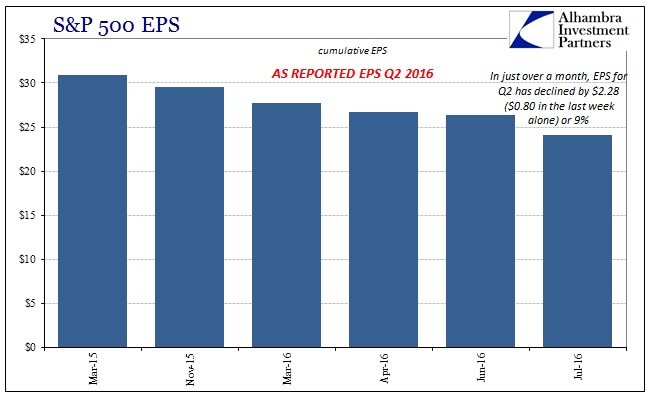 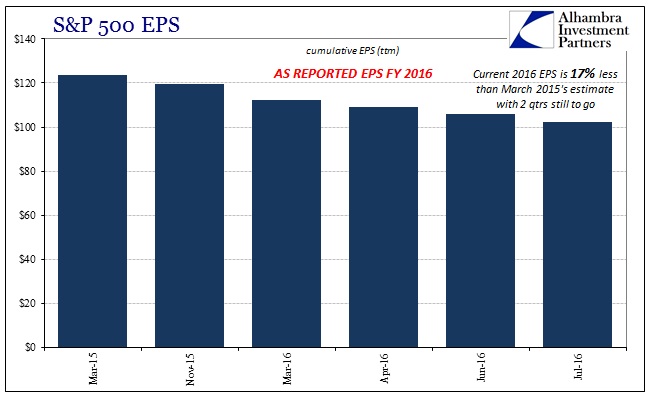 For CY 2016, current estimates are for just barely above $100 as-reported. That might be significant improvement from the $86.53 of CY 2015, but there is still two more quarters of shrinking estimates to consider as well as the fact that 2015’s earnings were a huge, huge miss. In other words, even if there does turn out to be some EPS growth in 2016 it is only a fraction of what would restore the QE-belief trend line. This year was supposed to be last year’s complete opposite insofar as EPS is concerned, rather than mimicking the the same trends. 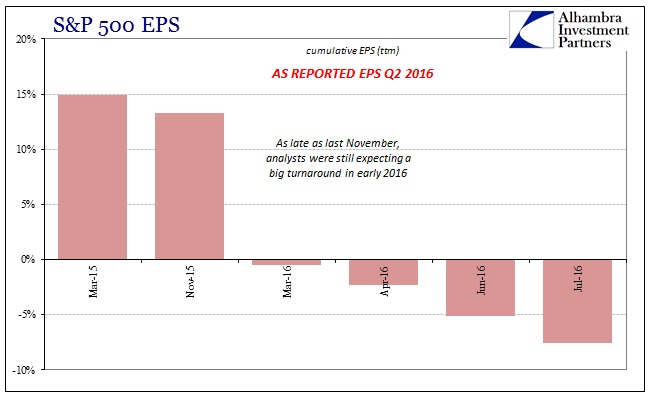 In November 2015, analysts were anticipating a sharp rebound that would get EPS closer to back on track, but still falling seriously short and thus only suggesting that a recovery was possible or even likely. That meant ttm EPS growth of 13% by Q2 2016 and 28% by Q3. As of July 28, that rebound is almost completely erased by actual earnings. Second quarter EPS is now only 5.7% above Q2 2015, itself an awful quarter, and 7.6% below on a trailing-twelve-month basis. Q3 is trending in the same direction just as quickly; since March, estimates have fallen by almost $2 already.

As a result, ttm EPS for Q3 2016 which were supposed to be +11% in March are now barely positive at all. The current estimates show just 1.5% growth, which in all likelihood will be erased by the time Q2 earnings are finished at the rate disappointment is currently being accumulated. 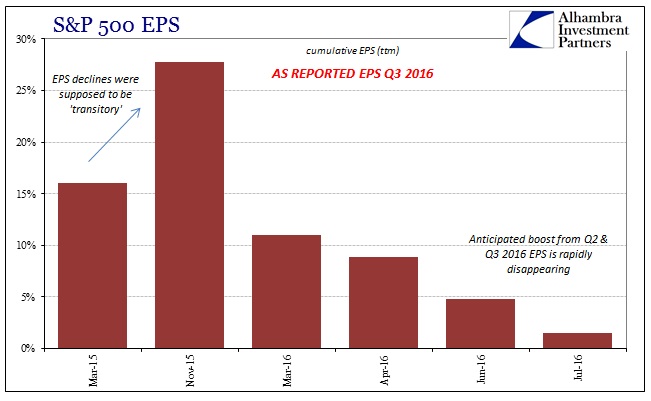 That leaves the stock market in nearly the same position as mainstream commentary on the real economy. Both are viewing the current predicament as a binary model; in the economy, if it isn’t recession it must be growth and therefore all economic data is colored positively by that assumption. In stocks, it appears “investors” have decided that because earnings aren’t getting worse they will have to get better.

EPS (ttm) peaked in Q3 2014 at $105.96 and has not been close to that level since. As of the latest update, Q3 2016 ttm EPS is expected to be only $92.03, still significantly less than two years prior and much closer to unchanged from the trough. Thus, not getting worse is not at all the same as “must be getting better.” That is true from a fundamental, economic perspective as well as the more important valuation problem. The longer valuations question linger, as if two years weren’t enough already, the greater the risk of the imbalance becoming realized. 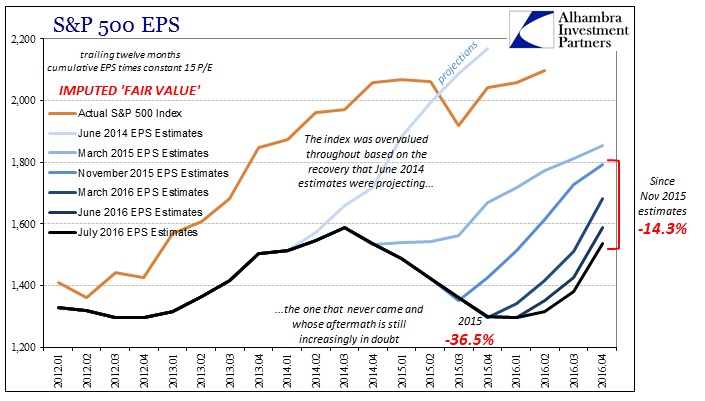 Stocks were already heavily overvalued by the time EPS topped out under the early part of the “rising dollar.” It was thought that continued growth, those forward earnings, would justify lofty multiples after only a year or so. Based on June 2014 EPS estimates, “fair value” of the S&P 500 at 15 times CY 2015 earnings would have been 2,169 for the index. But those forward earnings were a mirage, the real reported value more than a third less than that. “Fair value” on an actual basis would have been instead 1,297!

As you can see above, EPS estimates were supposed to close that gap relatively quickly, at least enough so that the “market” could forget about the revelation of forward earnings as a huge gamble and risk. As earnings have steadily come down in 2016 as 2015, however, there is much less support both on still the fundamental over-valuation as well as the ability of the market to once again “depend” upon forward earnings to dispel remaining, significant uncertainty. The $2 decline in just the past month in just one quarter of EPS should be a strong reminder to be very careful about earnings assumptions in this type of environment.

Obviously, with the S&P at and near more record highs, the far less pensive belief still holds to some extent. It isn’t getting worse so that’s all some stock investors need to justify themselves to themselves – at least until they might again be reminded that forward earnings are at least some good part economic in relation. After all, the S&P 500 may be at record highs, but it’s not as if it has gained all that much since EPS peaked almost two years ago and the earnings recovery is now stretched precariously into 2017.