The ECB’s experimentation with balance sheet expansion, both as a matter of bank “reserves” and overall balance sheet size, encompasses at least two distinct episodes. The first began in earnest in May 2010 with the initial concerns being limited to Greece and eventually PIIGS nations, finally exploding in later 2011 as a full-blown crisis (and far more than euros, it was again “dollars”). The total increase primarily of the LTRO’s was more than €1 trillion.

Not long after the massive ballooning of ECB size, they declared victory and recovery, contracting the balance sheet back by an almost equivalent amount by the summer of 2014. The appearance of the “rising dollar”, however, just as in 2011 unleashed a second distinct episode of now greater absolute expansion. That means there are a total of three expansions (the first starting October 2008), one period of maintaining size, and then one period of outright and significant contraction.

In statistical terms, that gives us a much better range of activities by which to measure the relationship of the central bank balance sheet size in all directions as it should lead to direct changes in inflation (in this case the HICP rate for the European Union). Theoretically, that is the proffered process, as balance sheet expansion supposedly equals money printing and thus an expected correlation with consumer prices easily understood in layman’s terms. 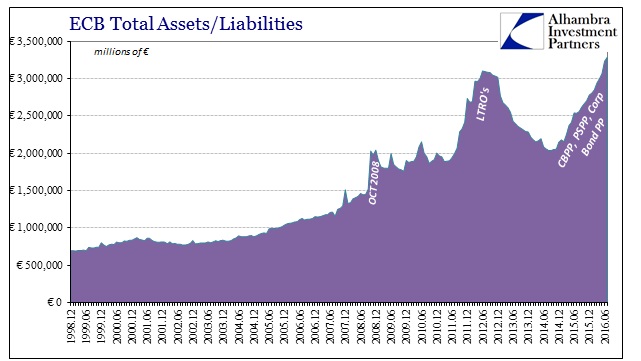 As in the US, statistically we find no relationship as the behavior of HICP inflation no matter what the ECB does is at best completely random. Instead, what little regression “explanation” there is appears just as we find in the US version suggesting (not in statistically significant terms) that reactionary relationship; inflation gets worse, indicating the economy gets worse, and the ECB increases its balance sheet size as a matter of response not future effect; even the inverse of that like 2013 where the economy appeared to get better and the balance sheet was withdrawn (as banks repaid the LTRO’s without policy offset elsewhere). 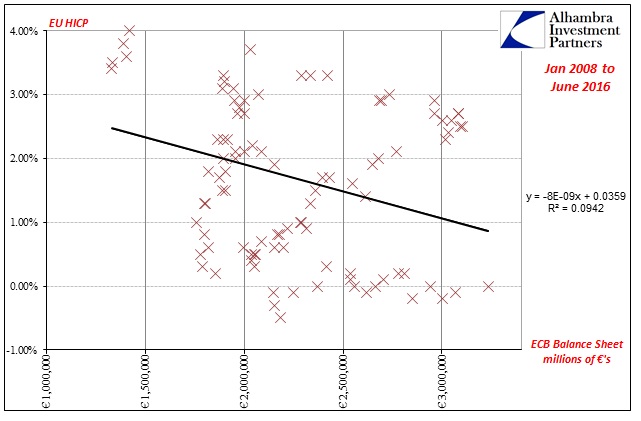 If we instead go by balance sheet momentum, again using a 1-year percent change as the independent variable, the regression line finds a positive slope but again in almost complete randomness. 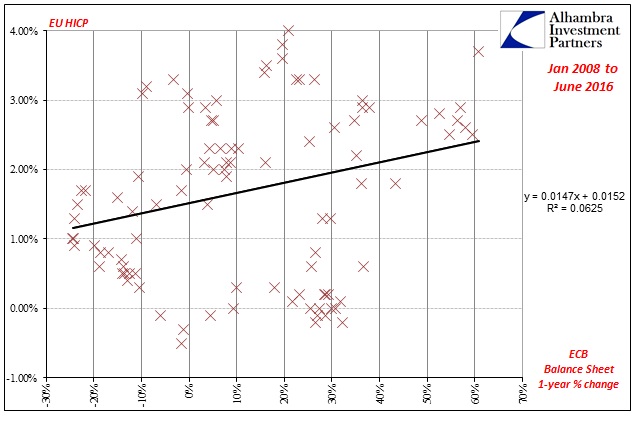 It doesn’t matter if we change the method of balance sheet momentum or even introduce a lag to the intended relationship. What I’ve done below is add and measure the effect of a 6-month change in the ECB’s balance 6 months into the future. This would assume that the HICP inflation in June 2016 might be explained by the ECB’s balance sheet expansion from July 2015 to December 2015. It is still just random noise. 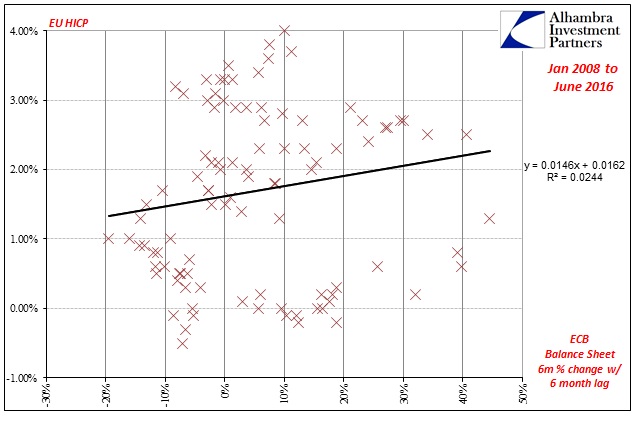 If we examine the data chronologically, however, a discernable pattern does appear. 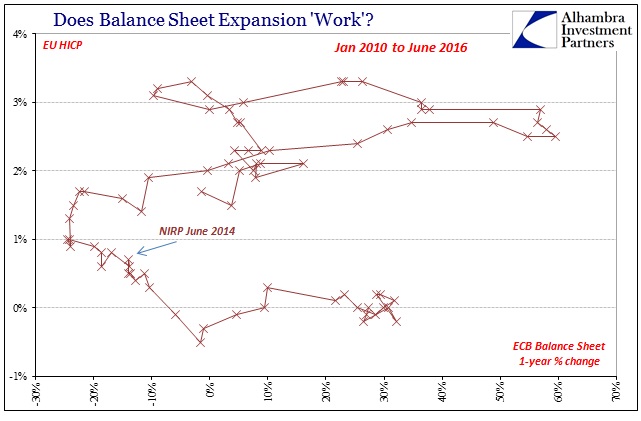 You can easily distinguish the two periods of heaviest balance sheet expansion that have occurred since the 2011 crisis (and the intervening policy contraction in between). The first occurred with higher rates of HICP inflation no matter whether the balance sheet was expanding, still, or contracting. The second, which now includes QE of variable rate and intensity, as well as purchases of covered and corporate bonds, has taken place at a distinctly lower level of inflation. In other words, there is surely an inflation paradigm, it just doesn’t happen to relate to the ECB and its monetary policy in any setting.

That suggests, in statistical terms, the ECB’s balance sheet is irrelevant to not just inflation but whatever is causing these hard, regime changes between 2011 and now. Obviously, this not some great mystery as this behavior being replicated all over the world regardless of monetary policy in balance sheet expansion of whatever type or format directs our attention to the real monetary state of the world. 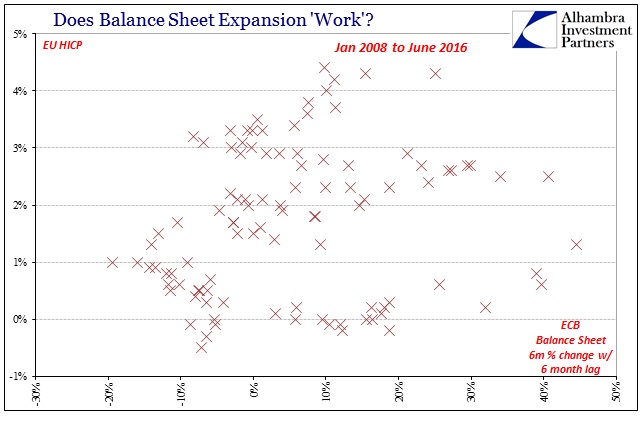 As in the US, European central bank mechanics offer no explanatory power for inflation, and leave interpretation susceptible (in mostly non-statistical terms) to the idea that central banks can and do only respond to what has already occurred far beyond their grasp, leaving little to no trace of that response.

Introduction, US statistics are here.