Offering the longest track record of balance sheet policy, the Bank of Japan should have been a cautionary tale for the central banks that have since followed. Unfortunately, ideology at the center of monetary policy in all jurisdictions leaves no room for objective interpretation such as this. Economists and policymakers (redundant) believe QE works, full stop. When it doesn’t, such as Japan, rather than rethinking the policy they blame the specifics of its (foreign) execution.

Thus, Japan’s experience with QE was justified as unique to Japan and really the Bank of Japan. In June 2003, the FOMC discussed the lack of progress with the first two rounds of Japanese QE as if they would do it entirely different. Their criticisms were focused on the Bank of Japan as if BoJ was the independent variable determining the success or failure of Japanese QE. Subsequent experience has proved that was never the case; the lack of progress was due to QE itself.

The Japanese experience with QE is really two experiences; the first encompassing the first nine (or ten) iterations that stretch back to 2001. The second is the most recent as balance sheet expansion under QQE was amplified with the intent that such power and fury would leave no doubt as to the effect of “money printing” over and above anything conducted before. 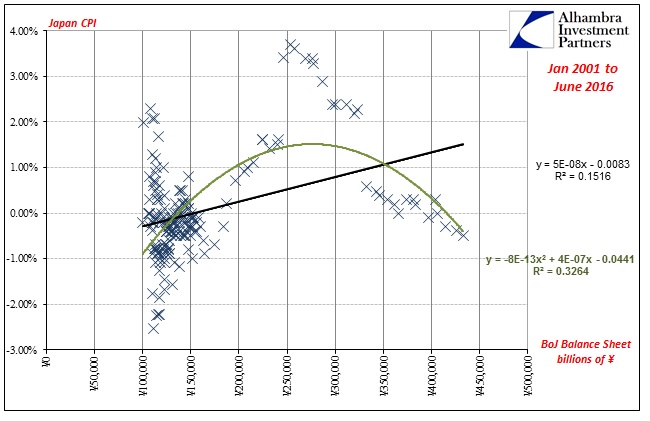 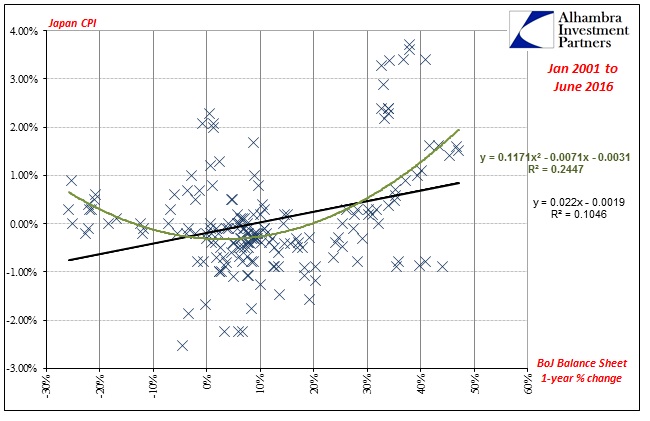 As with the US and Europe, the data demonstrates instead the familiar arbitrary meandering. The “best” fit is a polynomial regression of balance sheet change that does offer less noise (though still not statistical significance) but also a contradiction. It suggests on the right side that big increases in the BoJ’s balance sheet lead to higher inflation, but on the left side that balance sheet contraction does practically the same.

In reality, it is still the same unclear mess, especially when you clear up the QQE version. The increase in the Japanese CPI on the far right in relation to the most rapid balance sheet expansion had less to do with monetary policy and more about fiscal policy, specifically the tax increase in April 2014. In other words, the tax change was almost totally responsible for the surge in the CPI, a fact inarguably established as its base effects wore off exactly a year later. 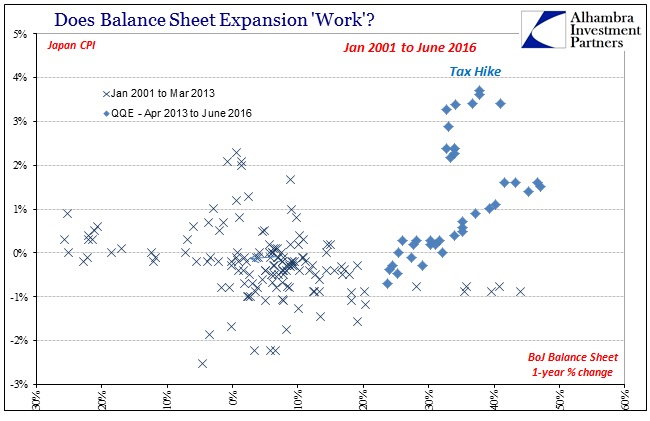 If we remove that time period from the review, the familiar non-correlation hint of reactionary policy re-emerges. No matter what the BoJ does, inflation has been more likely to be less than zero than above it. 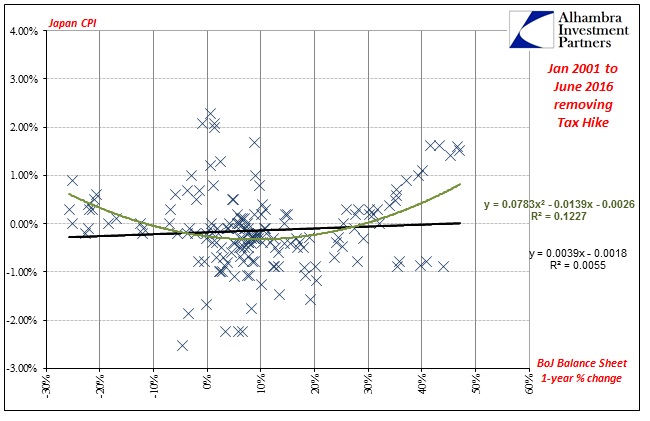 To get any kind of rapid and direct response, Japanese officials have had the most “success” with the fiscal change. Rather than repeating it to strike out at inflation, however, even Japanese officials recognize what really happened when it was tried – it devastated the Japanese economy from which it has yet, more than two years later, to recover. 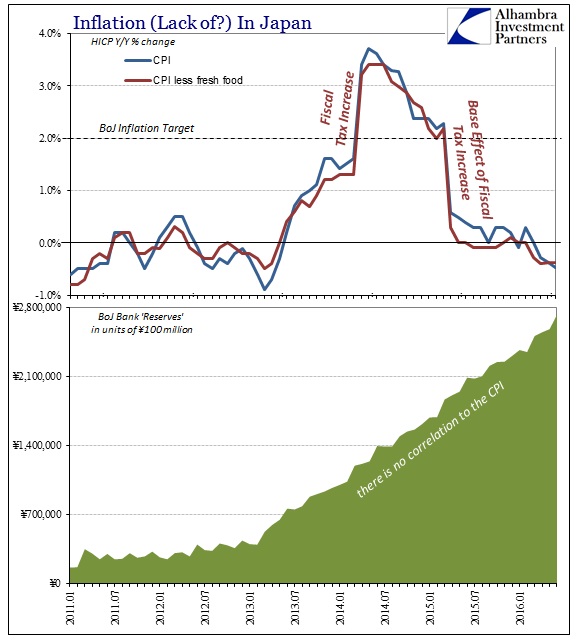 Examining QE separately in its two versions shows again that inflation is far more associated with factors outside of monetary control; and that includes macroeconomic conditions that monetary policy, through inflation, seeks to influence. Factoring the tax hike or not, the trend in Japan’s CPI during QQE bears no resemblance to the balance sheet changes. 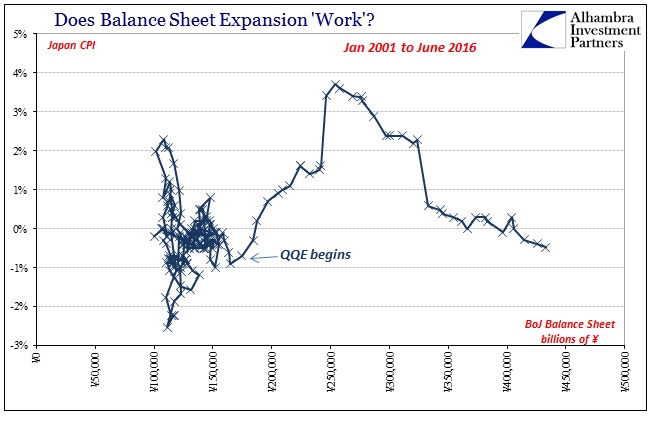 The prior nine (or ten) QE’s leave little distinct pattern and relationship, this universal randomness. This is what should have informed and even driven monetary policy discussions in 2008 before the FOMC ever voted for QE. But because they had convinced themselves of their own expertise as distinct from Japanese experience, they entered into balance sheet expansion with biased and ill-suited information for which we all have to pay the price in lost opportunity (status quo as impediment to necessary reform). 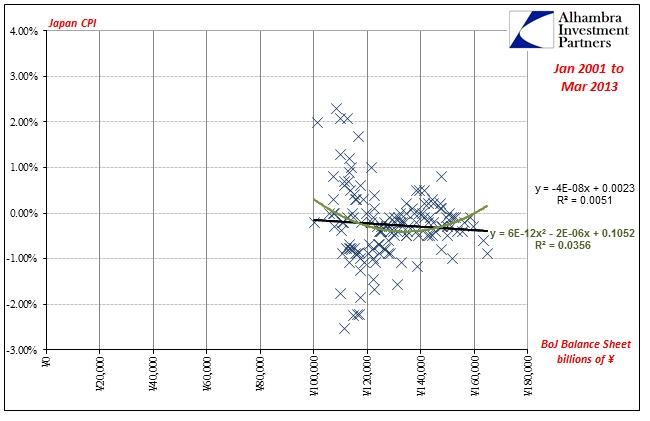 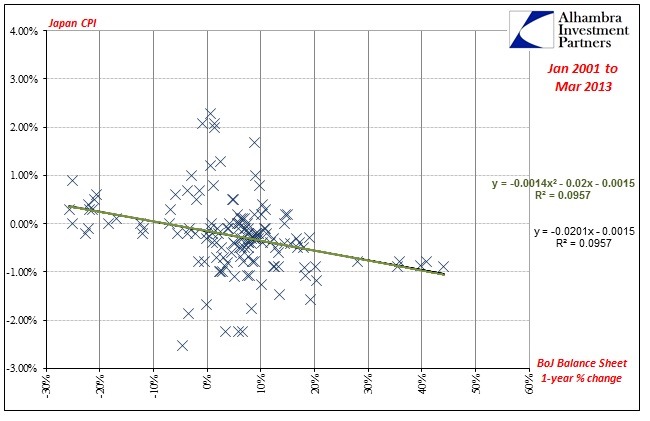 Thus, the most that can be said for monetary policy and balance sheet expansion via the Japanese experience is that in order to generate even the slightest possibility (still not statistically significant) of inflation requires a massive magnitude but still to be secondary to a direct fiscal intrusion. And even then it is not the sustained kind of inflation which monetary theory and policy actively seeks and expects. It hardly speaks of monetary policy as powerful money printing where it’s best chances (that are still practically zero) are in a secondary role.

Introduction US statistics are here.