The Chinese Counterpoint To Payroll Friday

The Chinese Counterpoint To Payroll Friday

Under traditional “rules”, devaluing of a currency is supposed to bring about a measurable, even obvious increase in the export sector of the country undertaking the manipulation. The Japanese have been notorious for believing in the paradigm, and not just in the past four years under QQE and the whispers of it. Some people still believe that China is merely the latest to desperately employ the tactic.

A more than 6 percent slide in the yuan against the dollar over the past year appears to have done little to help China’s exporters in the face of stubbornly soft global demand and weak commodity prices.

Exports in China fell 4.4% in July in dollar terms, another “unexpected” contraction despite it being now the sixteenth out of the past seventeen months (with the only positive in March due to the Golden Week holiday and more than canceled out by February). June exports were revised significantly (and unusually) lower to show a 6% contraction instead of the -4.8% first reported. In local RMB terms, Chinese exports rose by 2.2% in the latest month which in reality isn’t any different from any of this. If it isn’t +30% in either dollars or RMB, then China is in big trouble.

As the Chinese economy sputters, it is both because of the global economy and further trouble for it. After imports were nearly flat in May, triggering an almost optimism panic of confirmation bias among economists and the media (redundant), they contracted sharply again in the months after; -9% in June and now -12.5% in July. This was, again, seasonality. In 2015, imports crashed to start the year, dropping more than 20% in January and February, before “improving” to -6.3% by June 2015 and eliciting all the same optimism and confidence that the bottom had been reached. By September, imports were contracting by 20% again. 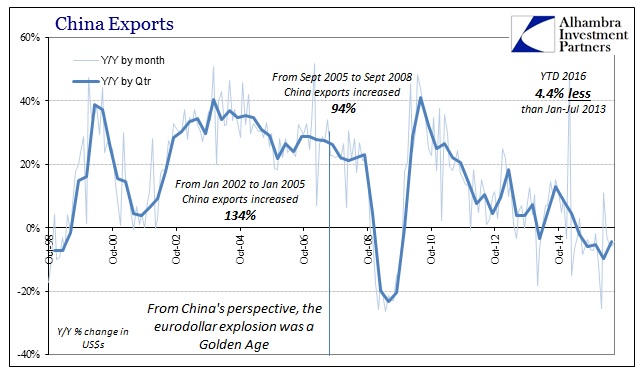 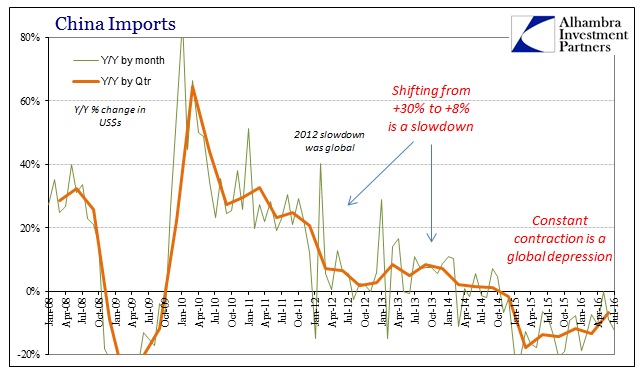 Economists and especially policymakers need to stop looking at these trends as if they relate to the dollar and start to appreciate how they are being driven instead by the “dollar.” There is a world of difference contained in those quotation marks, as the Chinese are finding out especially as it relates to US consumers. On Friday, the Census Bureau reported that US imports from China fell nearly 7% in June, the fourth straight month of contraction and an obvious further decrease since last August.

Starting November 2014, the PBOC cut the benchmark 1-year lending rate 6 times and further lowered the bank reserve requirement by 350 bps. None of it had any effect, though economists were very eager to assign May’s nearly zero import estimate to them. Instead, by view of the “dollar”, it becomes clear that China’s central bank policies rather than being “stimulus” were not proactive but merely reactive efforts to counteract the “rising dollar.” Thus, as in the US, Europe, and Japan, monetary policy doesn’t tell us anything about what will happen, it is rendered just a coincident or even lagging indication of what already did. 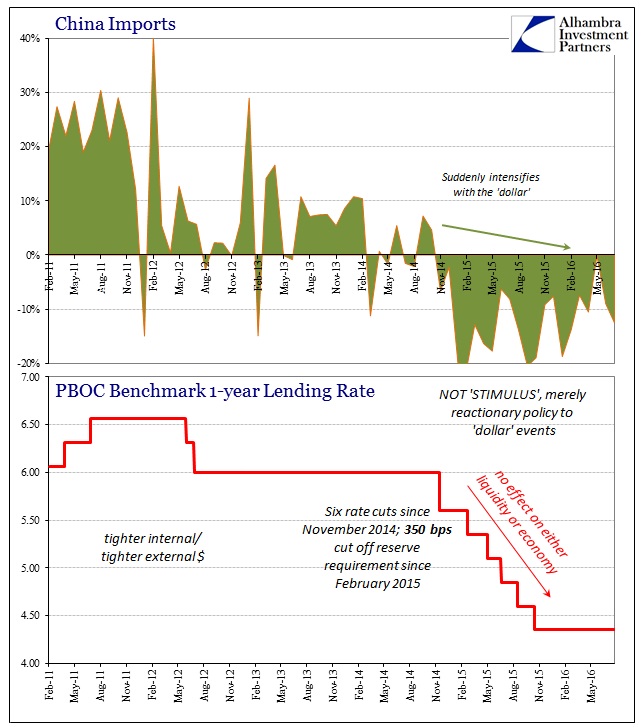 That is what is so frustrating about economic commentary with regard to China and really everywhere else. These relationships are very easy to see and not at all difficult to discern. It takes very little effort to determine at least when the Chinese economy, as global economy, first decelerated and then did so again. 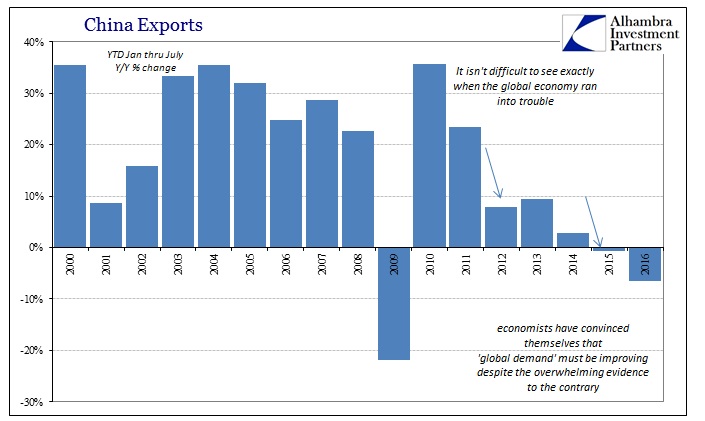 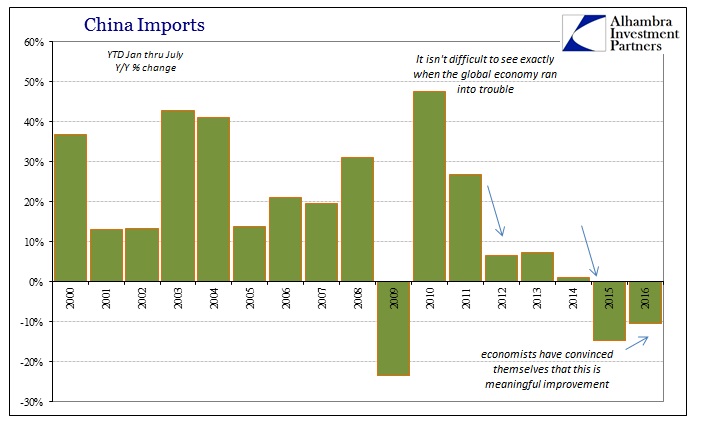 Exports had grown by at least 20% throughout the middle 2000’s and then appeared to be recovering that way in 2010 and 2011. In early 2012, global trade, including activity running through China, both in and out, suddenly and sharply decelerated. Rather than being “unexpected”, given what transpired in 2011 one follows the other. Then after two or so years at this reduced rate, despite further “stimulus” not working in China or everywhere else around the world, trade suddenly and sharply fell off again in early 2015. For another almost two years, this now contraction has remained that way.

It is this ragged ratcheting that is likely the primary source of confusion since orthodox economics, by definition of its base econometrics, only works in linear fashion. Rather than be bewildered by it, however, the behavior actually observed in contrast to what was modeled and forecast is itself a clue as to the monetary nature; particularly corroborated by commodity prices that have been falling also since 2012 and then sharply once more to start 2015. 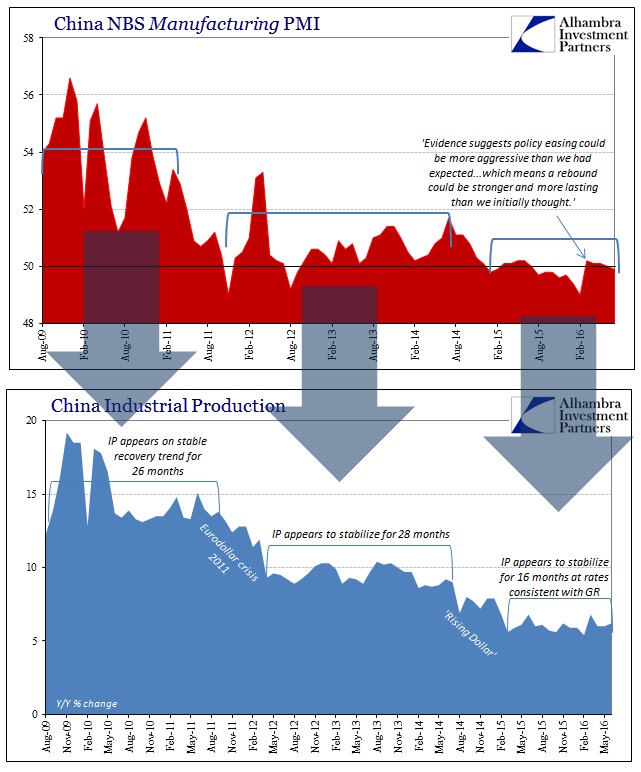 These periods of slower, seemingly stable growth are misleading because they are not stable at all. Economists have convinced themselves that either that pseudo-stability is the work of effective “stimulus” or at least in China it is the government actively seeking these conditions as a matter of intentional policy to move the Chinese economy into a mature, consumer-driven state. The view of the “dollar” proves otherwise, especially as these periods or interim phases only get worse from one to the next. 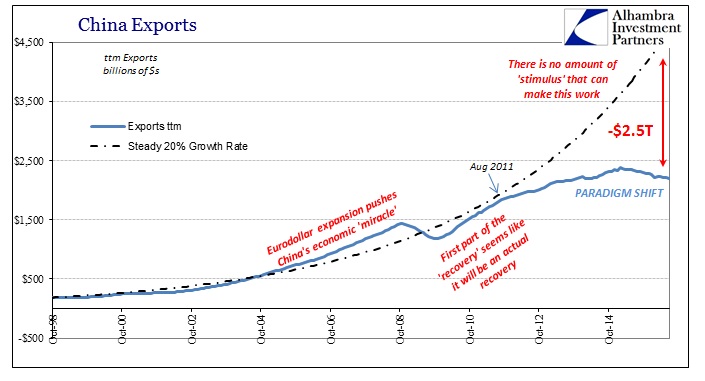 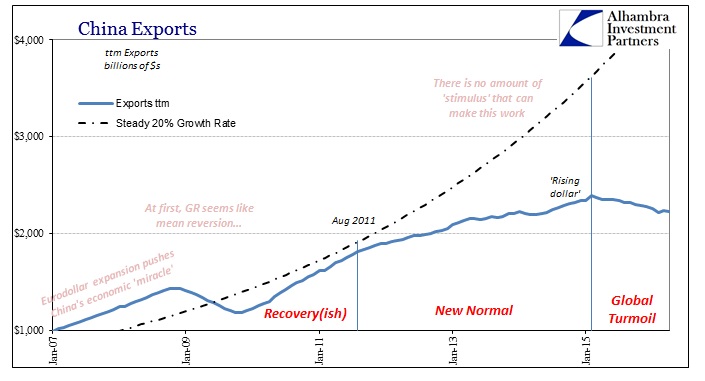 It is the central paradox of the past two years. The BLS reports continued strong hiring in the United States which should mean a big boost to income and then spending. Yet, despite the payroll figures, the goods economy worldwide only continues in contraction (it can’t even be classified as recession anymore since it obviously isn’t a temporary decline). But it is only a paradox because economists have made it so based on a (severely) outdated assumptions and biases particularly about monetary policy and really money.

If the US economy were as strong as advertised, the Chinese would be first to know it. They would even get the message long before economists and the media. Because they are instead increasingly confounded, we know very well that the US economy is in rough shape and, much worse, chronically so. This, too, is very easy to observe, a condition that the entire global economy including (all) US workers has been quite familiar with for a very long time. 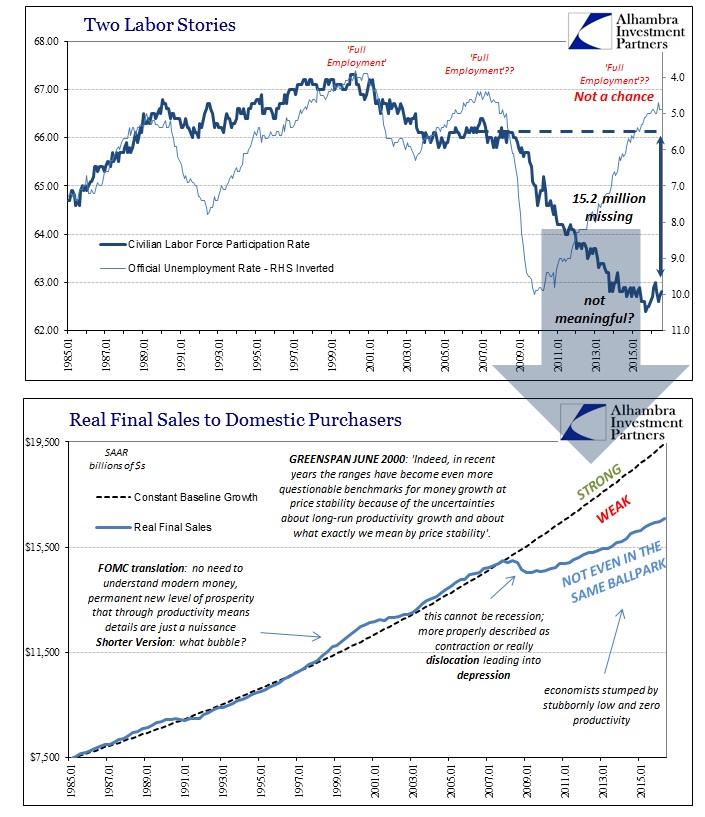