The risk budget is unchanged this month although the composition of the portfolio does change. For the moderate risk investor, the allocation between bonds, risk assets and cash remains at 50/45/5. There are changes to the allocation but the overall risk budget stays the same. Credit spreads did continue to narrow this month but other indicators did not confirm the move. The yield curve flattened and valuations rose as earnings fell. Momentum for major stock averages is waning short term and the US dollar has weakened since the last update. 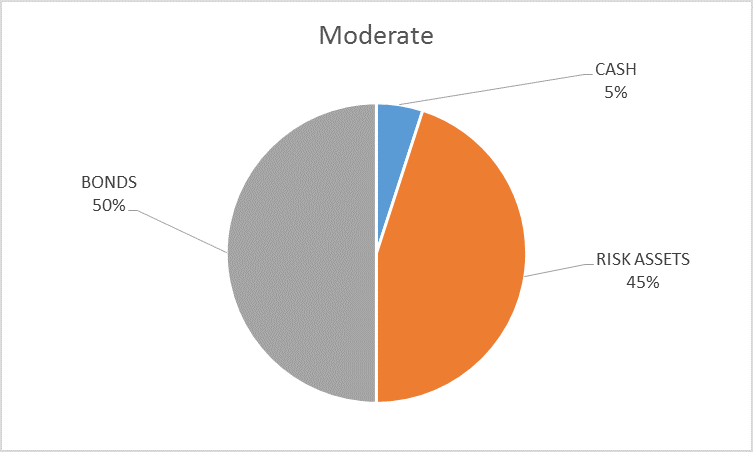 The changes to the allocation this month are mostly predicated on shifting momentum. Stocks, despite making new highs, do not exhibit a high degree of conviction; there has been no followthrough since breaking out to new highs. While the incoming economic data has improved somewhat – better than expected is not necessarily better – our market based indicators have responded very tepidly. It does not appear the market is buying the renewed growth scenario. One has to wonder if the feeble Q2 rebound – compared to the previous two years experience – hasn’t takes some of the wind out of the sails of the second half rebound crowd.

The narrowing has taken place across the credit curve. Even CCC bonds are no longer showing much stress. The appetite for yield is pretty amazing.

One area of concern is the TED spread which has recently widened as LIBOR has risen. It isn’t anywhere near levels associated with recession but it is moving in the wrong direction. Most everyone is dismissing this as a result of regulatory reform in money markets but if you have a loan geared to LIBOR what difference does it make why LIBOR went up? Your loan is still going to cost more. Call it regulatory tightening if it makes you feel better but it is a tightening. It isn’t much and the impact may be minor but it isn’t zero and it shouldn’t be ignored.

The yield curve continues to flatten but has stalled more recently. Prelude to a steepening based on more Fed action? Is the economy really that bad? Seems unlikely based on recent data but then the same could be said a few months before almost any recession.

10 year Treasury yields are still near the lows of this cycle but downside momentum is waning and a corrective rally in rates is due. 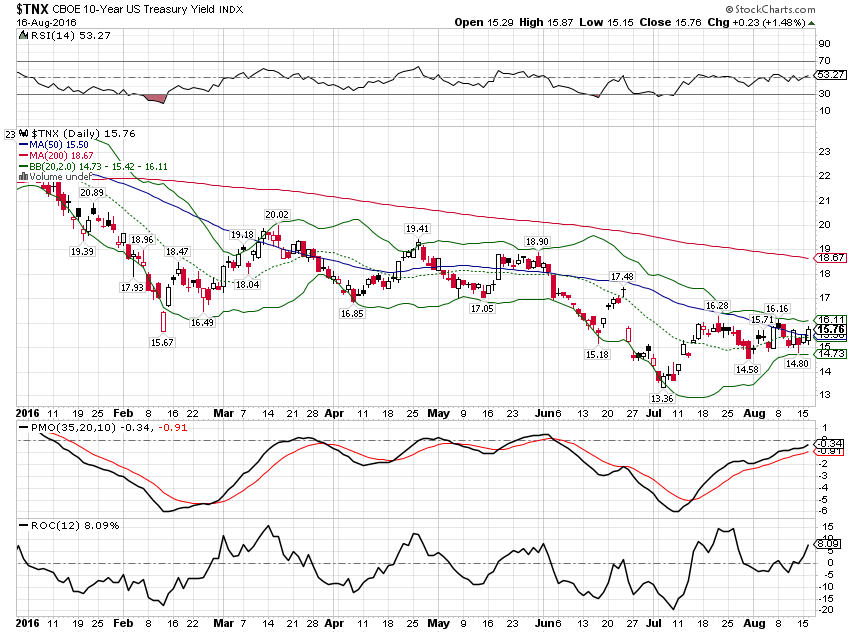 Overall, there hasn’t been much change in growth and inflation expectations as expressed through the bond markets. There has been a very slight uptick in real growth expectations and nominal 10 year rates do seem poised for a corrective rally. Could it be the actual end of the multi-decade bond bull market? Have rates seen their lows? Well, of course anything is possible but I must admit I have my doubts. We will eventually have another recession and when we do I see no reason to expect anything but another bond market rally. For now though I think it wise to shift with the short term trend and shorten up duration again as we did last month. More on that below.

Those negative real rates continue to weigh on the dollar which is rapidly approaching pre-Brexit levels. With both short and long term momentum now negative on the dollar index, I expect further downside. That should continue to be supportive of commodity prices. 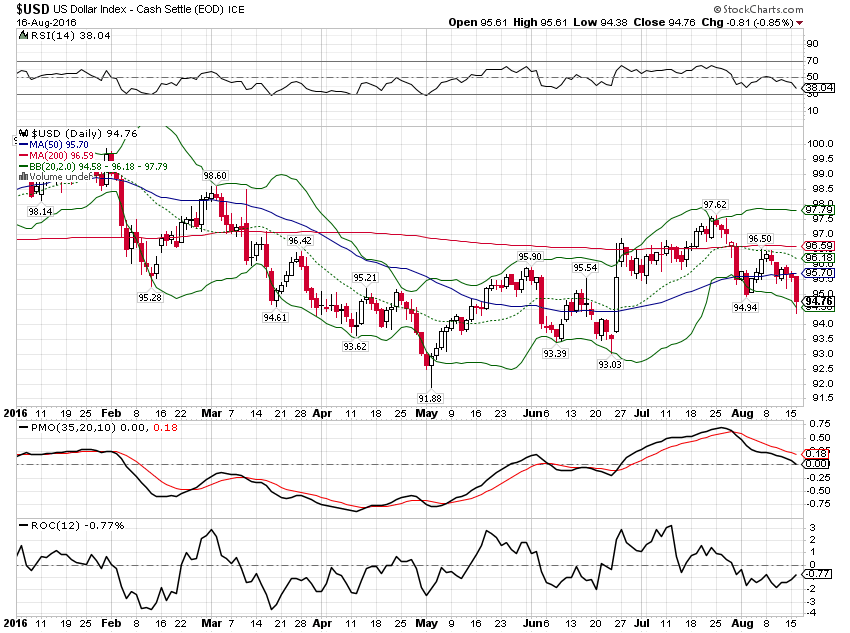 As I said above, the S&P 500 is just getting more expensive as earnings fall and stock prices continue to rise. It isn’t a big change though as the market as a whole just really hasn’t moved that much. Nevertheless, every valuation technique I know of that has any relation to future returns says stocks are fairly dear compared to history. How dear depends on your methodology but I don’t know of any valuation technique that sees US stocks as cheap right now. Emerging markets continue to be the cheap part of the equity world and they now have momentum relative to the US and the tailwind of a weakening dollar – as long as it doesn’t get too cheap, too fast. 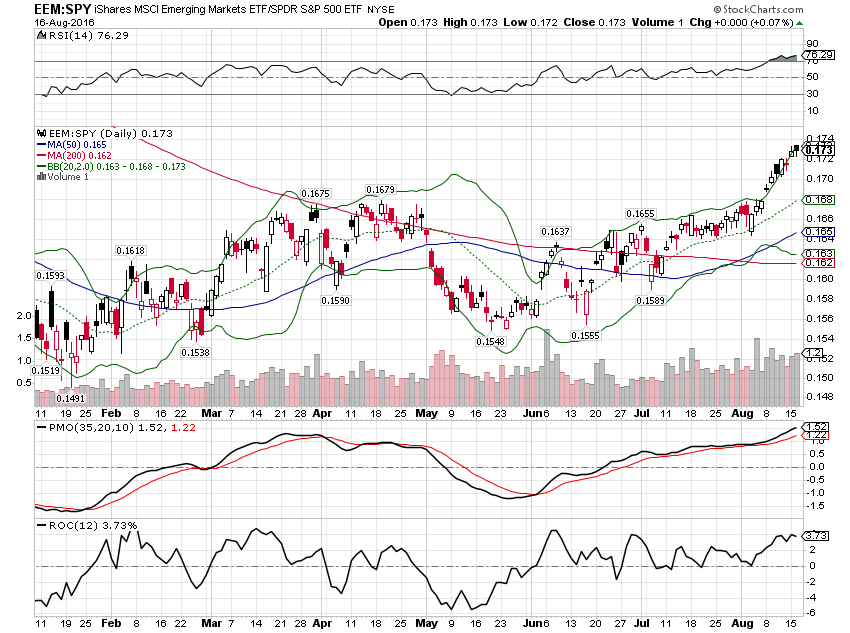 The S&P 500 has barely budged so far in August and long term momentum is still negative. Short term momentum has waned as well and is now offering a fresh sell signal. The complete lack of volatility so far this summer is actually quite eerie. It is said that one shouldn’t short a dull market but this might be the time that old adage doesn’t hold up. 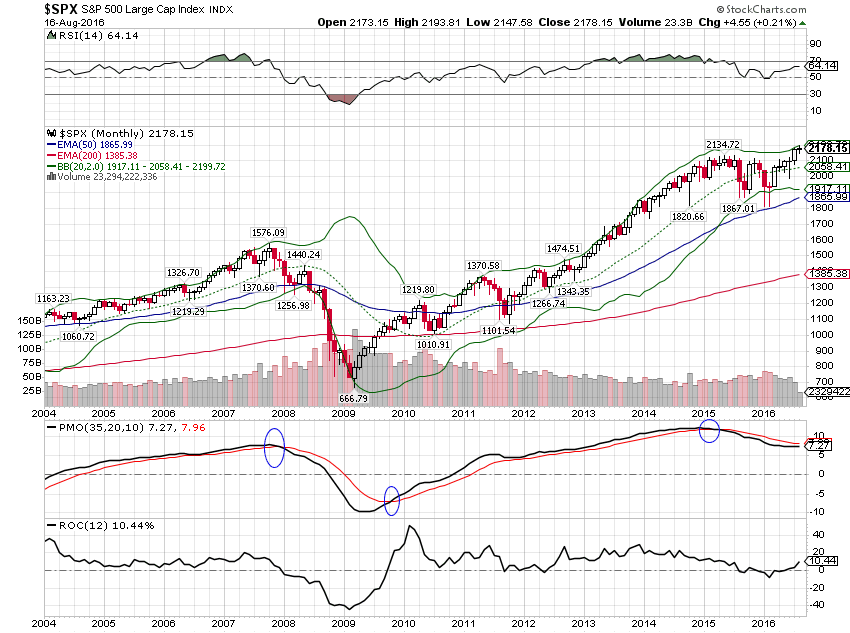 EFA has been outperforming the S&P since early July but that was just correcting an oversold condition. Will it have legs? As I’ve said many times, it is very difficult for international stocks to outperform for any length of time unless the dollar is falling too. From a valuation standpoint EFA is much cheaper than SPY so one can justify an overweight but for this to really move, we’ll probably need to see the dollar fall out of the bottom if its recent range. 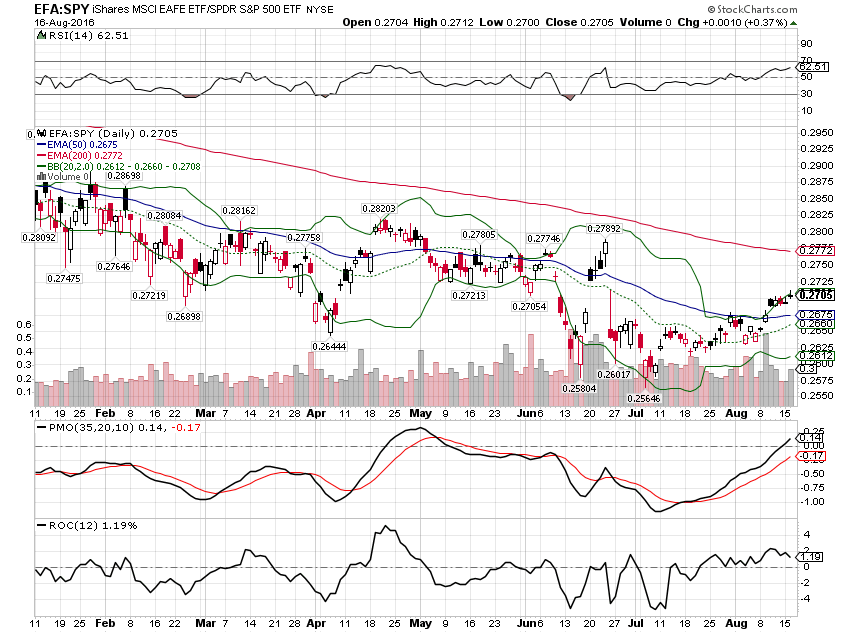 Long term momentum continues to favor gold over stocks. This trend has been struggling a bit lately but is still intact. 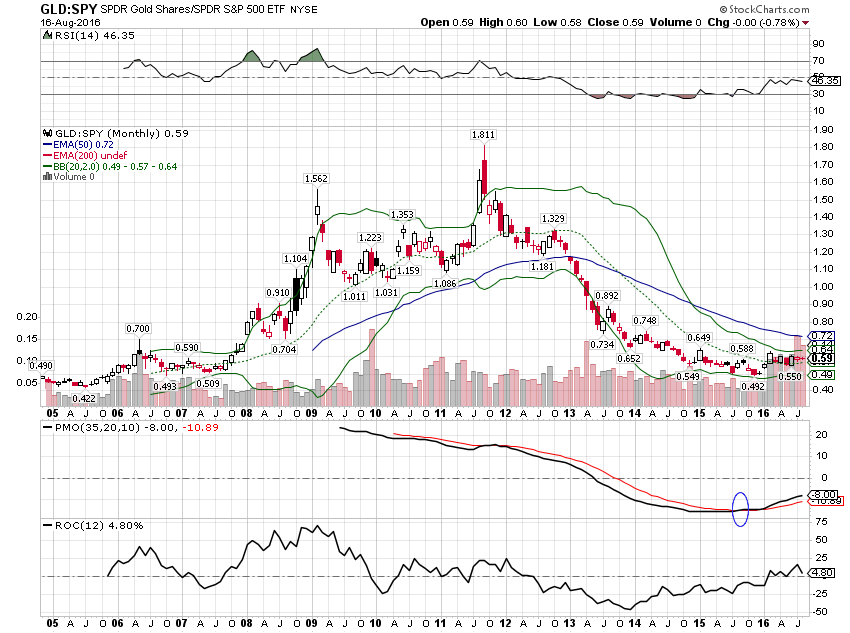 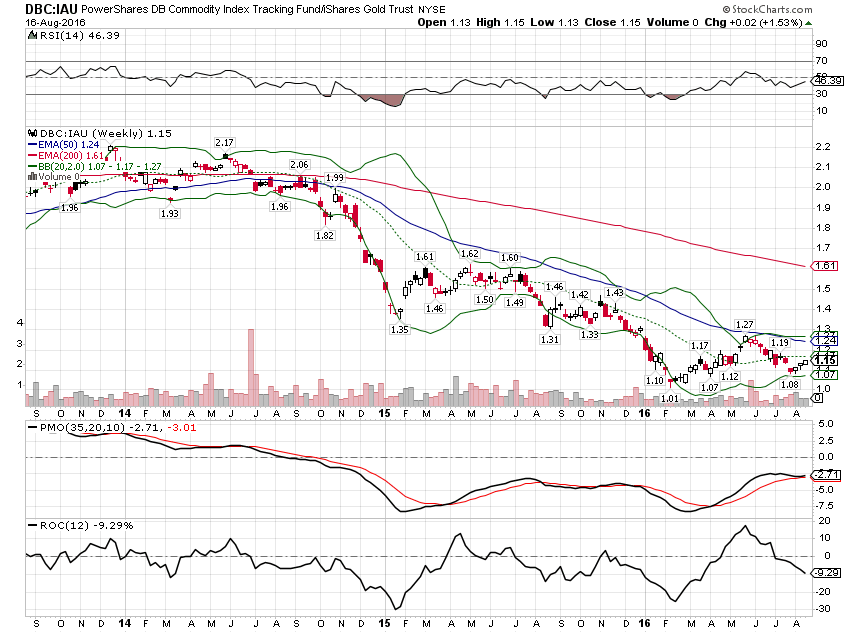 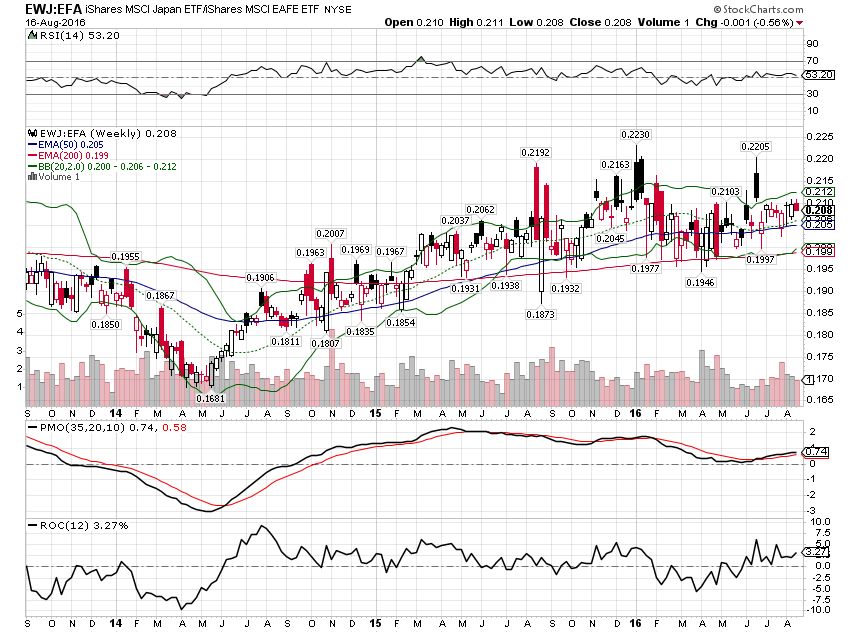 Short and intermediate term momentum has turned down for the 7-10 year Treasury ETF. With a weak dollar also in place I think that makes sense and caution on duration is warranted. 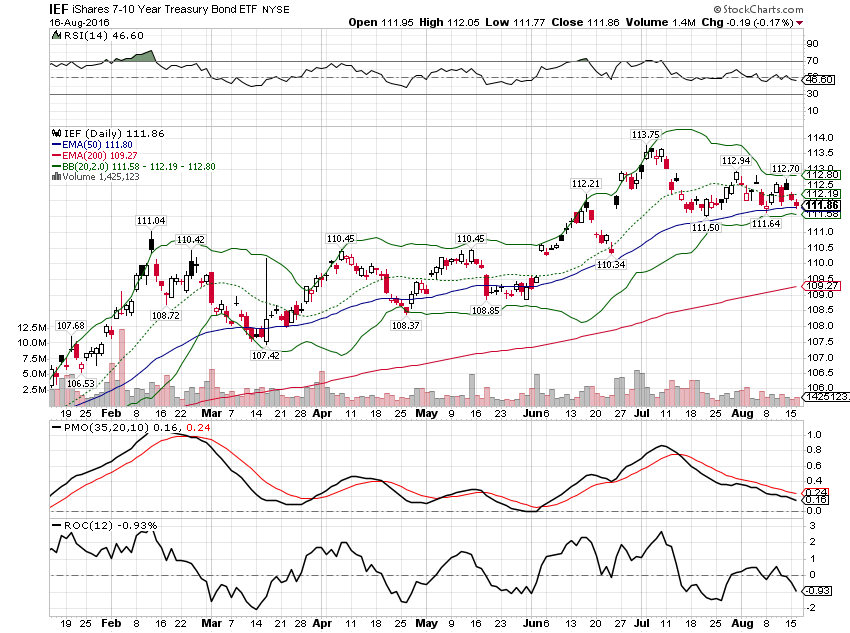 As bonds have lost momentum so have REITs, relative to the market. 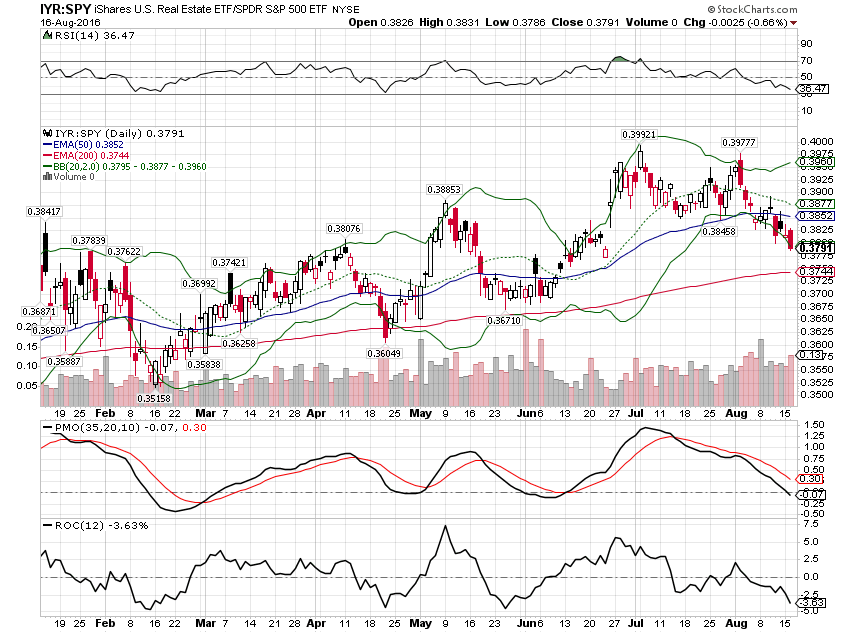 I am making some changes this month mostly based on the momentum shifts we’ve recently observed. Here are the changes:

This is not a big change but if these trends continue they could be important and early. Markets are pointing toward dollar weakness and all that entails. Assuming it doesn’t mean recession – at least not yet – the implications would be higher commodity prices, higher interest rates and outperformance by foreign stock markets. Currency trends have in the past been persistent but in the era of currency wars I’m not sure that holds.

Here’s the moderate allocation as it stands after the changes: 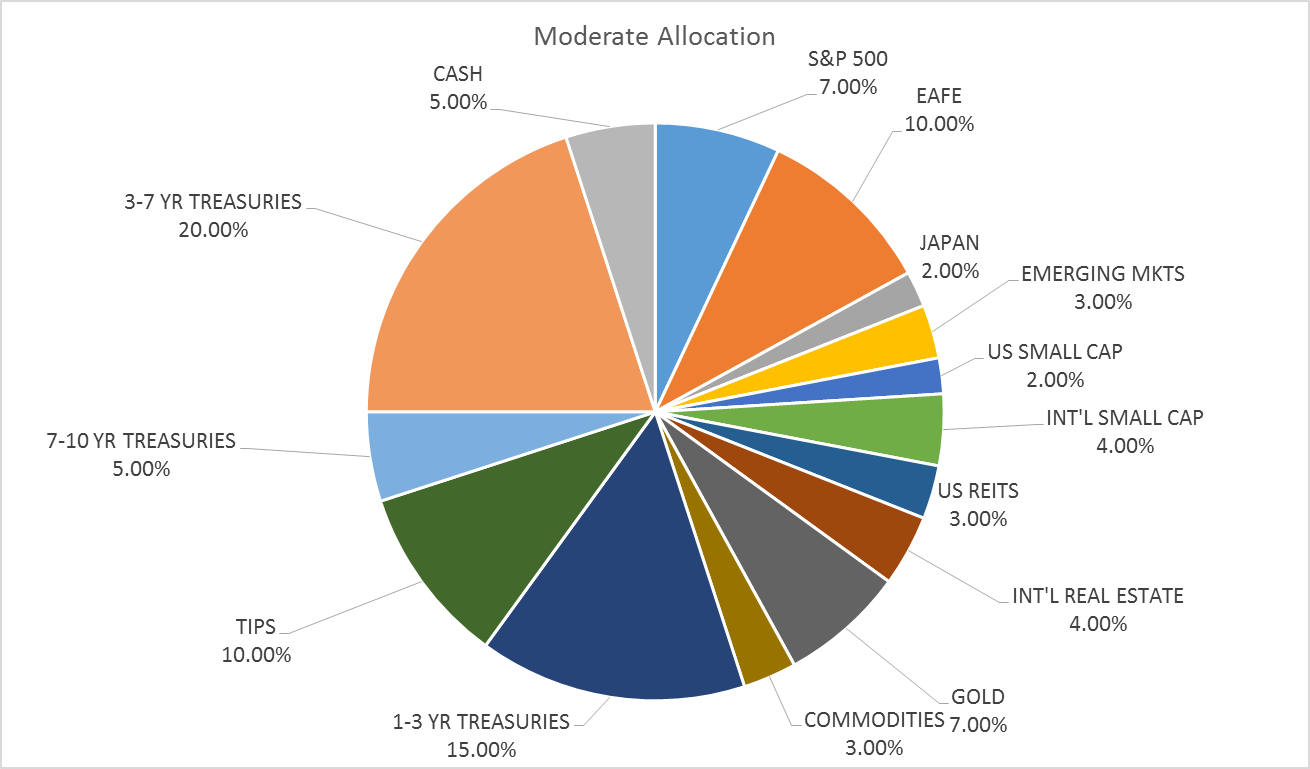 FOR INFORMATION ABOUT OTHER RISK BASED ASSET ALLOCATIONS OR ANY OF OUR OTHER TACTICAL MODELS, PLEASE CONTACT JOE CALHOUN AT  JYC3@ALHAMBRAPARTNERS.COM OR 786-249-3773. YOU CAN ALSO BOOK AN APPOINTMENT USING OUR CONTACT FORM.