One of the primary points of emphasis with regard to Japan’s QQE was the yen itself. Pushing the value down, even by misconceptions about what central banks do, was supposed to simultaneously increase inflation pressures via the currency translation while also stimulating the export sector to a sufficient degree that Japan Inc. would be reborn and share the nominal gains with the rest of the country. But it never happened that way even from the very start.

The export sector did receive its nominal yen boost, but that amounted to nothing more than an advantage for it alone. The inflation that was caused by yen devaluation proved both temporary and extremely harmful, as wages didn’t respond to the burst in import costs quite (at all) as economists thought. In July, the Japanese government was left to raise its minimum wage gain to 3% even though you would think after three years of QQE and Abenomics it wouldn’t be necessary. Instead, Chief Cabinet Secretary Yoshihide Suga admitted:

It is extremely important to stimulate consumer spending by raising the minimum wage, which will help Japan escape deflation and contribute to a positive economic growth cycle.

Part of the problem is and has been imports. A devalued yen Japanese should have led consumers and really businesses to import much less. That wasn’t ever the case, as once again monetary theory melts in the complexity of the real world. Japanese businesses instead of embracing intentional monetary instability found Japanese banks only that much more willing to turn yen into “dollars” and supply those businesses with the global financial format with which to move off the Japanese islands. Despite an anticipated heavy boost in and from Japan’s trade balance, QQE unleashed instead an even greater level of productive impoverishment from which the country has yet to recovery – and may never. 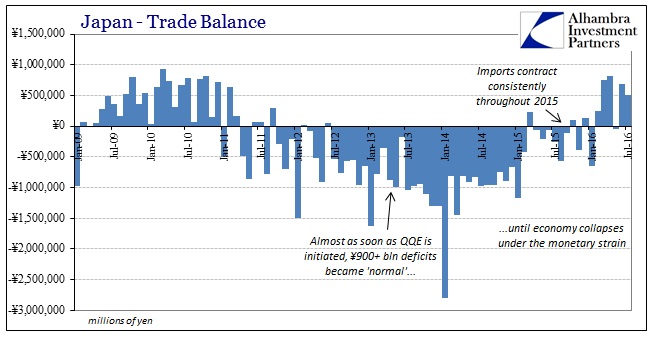 But even those countries, mainly China, that benefited from Japanese offshoring are now pulled down by Japan’s newfound poverty. The burst of new activity outside of Japan is no longer a burst but a sustained contraction as both Japan’s internal economy sinks in an undeclared perpetual recession (which argues against the possibility of recession in the first place) and the global economy increasingly strangled by eurodollar instability (affecting global trade and commerce first).

It is a microcosm of what “free trade” has become under purely financialized terms, a long-term benefit to no one. 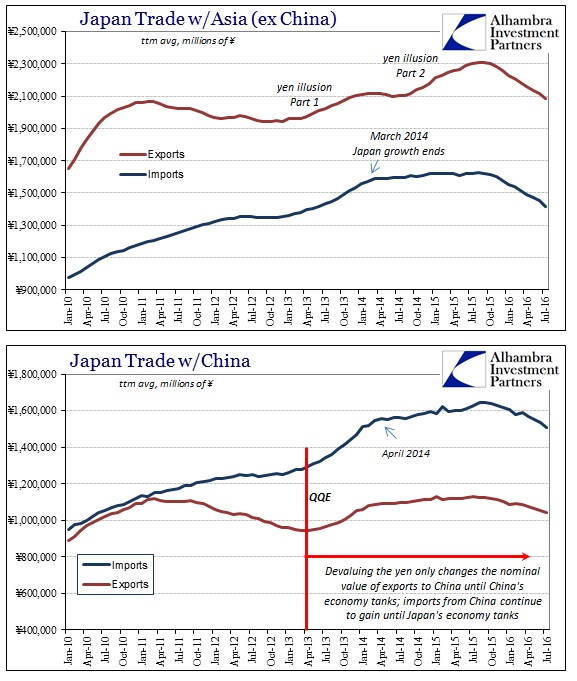 With the yen no longer following along with BoJ policy, there is no longer the possibility for either the inflationary boost from devaluation or the export boost from nominal receipts. And that makes no sense if economic theory is to be believed. These are supposed to be pump-priming activities, initial if artificial bursts of activity that by simple act of activity creates follow on economy. Instead, all we ever see of “stimulus” is at most temporary gains that are more than offset by the costs of those “gains.”

For July 2016, Japan’s Ministry of Finance reports that exports declined by 14%, the worst since 2009, greater even than March or April 2011 and the tsunami. Imports just collapsed, falling just less than 25% despite a “stronger” yen since November. It has restored Japan’s trade surplus but in the exact wrong way; the lack of internal progress has created such an internal mess that imports are now falling faster than exports. I highly doubt that this was the situation Bank of Japan officials had in mind when they first suggested a huge monetary boost to release Japan from the grip of its so-called deflationary mindset.

If anything, as the most recent months of the CPI demonstrate, they have made it all that much worse. 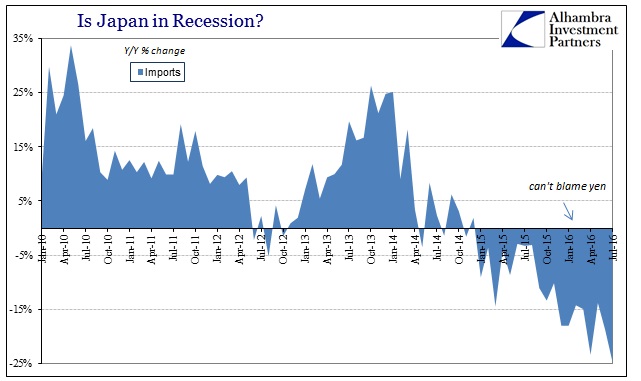 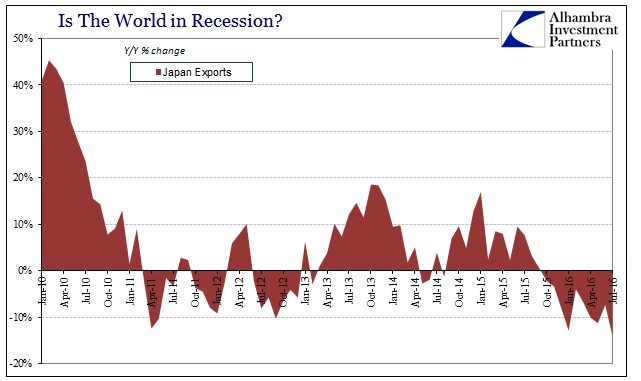 Economists, especially American economists like Paul Krugman, remain undeterred (when are they ever, since failure is to them just an invitation to do more harm). Exhibiting the pretzel logic that is necessary to keep from acknowledging the failure of orthodox prescriptions and “solutions”, Krugman back in October argued that 2% was not nearly enough inflation (Japanese households haven’t been punished nearly enough for being forced to participate in these experiments). The reason? A “timidity trap” (I am not making this up).

This observation suggests that even in the best case Japan may face a version of the timidity trap. Suppose it convinces the public that it will really achieve 2 percent inflation; then it engages in fiscal consolidation, the economy slumps, and inflation falls well below 2 percent. At that point the whole project unravels – and the damage to credibility makes it much harder to try again.

In other words, success equals failure? Krugman argues that Japan needs to be weaned off “fiscal support” before its debt load does become a problem (he even acknowledges that though he advocates even larger fiscal deficits there is a limit to it, and that Japan is as likely as anyone to explore that limit). Straight away, this makes no sense; why would any economy need to be “weaned” in the first place. If “fiscal support” was actual support, it would have led to sustained economic advance that would have meant nobody noticing the end of “stimulus.”

But because Japan is trapped in what he calls a “slow-growth economy” any act of fiscal retrenchment will lead to this “timidity trap.” Therefore, monetary policy must act so that its own “stimulus” can offset “fiscal consolidation.” But monetary policy isn’t effective in this “slow-growth economy” and thus requires fiscal “stimulus” in order to achieve what Krugman wrote in the late 1990’s as a “credible promise to be irresponsible.”

If that’s the reality, even a credible promise to be irresponsible might do nothing: if nobody believes that inflation will rise, it won’t. The only way to be at all sure of raising inflation is to accompany a changed monetary regime with a burst of fiscal stimulus.

In reality, there is no economy in Krugman’s world; it is but a passive ball of yarn to be batted back and forth by the cat in one hand of “stimulus” or the other. He was arguing that fiscal policy is needed for monetary policy to be effective so that fiscal policy can consolidate without further trapping expectations. Nowhere does he bother to address the “slow-growth economy” in the first place, as if it were all a matter of demographics alone. That might be more the case in Japan than anywhere else, but it is still a copout.

Given what we find of the Japanese economy especially in the trade sector, it is much more likely that Japan suffers from a surplus of policy interventions from every possible angle and intensity. You don’t have to offer any explanation as to why Japanese businesses were so keen to get out of Japan, that much is obvious. To economists, the world revolves around nothing more than economic policies, meaning economists. It is total political narcissism except that it is acted out in every developed economy around the world.

To prove that point, in July just as the Cabinet Office was finishing plans to command wage gains where there should have been gloriously sustained and broad-based income surges, Krugman declared that the Bank of Japan should now target 4% inflation (I am not making this up).

Japan should raise its inflation target to 4 percent and embark on a large but temporary fiscal stimulus to boost prices in the economy, Nobel laureate Paul Krugman said.

Speaking at a conference on Thursday in Singapore, Krugman called for “a big burst of government spending and maybe also cash donations,” though authorities don’t necessarily need to adopt a strategy that involves “helicopter” money, he said.

“Japan needs to get that inflation rate convincingly high,” Krugman said, adding that worrying about the “longer-term budget outlook needs to be put on hold.” The Bank of Japan’s current target is 2 percent and consumer prices excluding fresh food, a key benchmark for the BOJ, have fallen for three straight months.

In other words, this is no time to be timid because everything that he and others like him promised didn’t work, which to them means that it didn’t work because it wasn’t big enough even though when they planned what didn’t work they said then that it was bigger and better than the time before that. There is apparently no economic ill that the “right” amount of policy can’t fix, even if that ill is policy. Unfortunately for the world, economists obviously aren’t permitted to know what the “right” amount of policy is until they actually see whether what they did do was it (I am not making this up). Why not just dispense with the façade of science and discipline and just throw darts? It’s as likely as what they are doing now to come up with the magic number answer.

In the meantime, the Japanese economy, like the global economy, suffers from economy while economists search the skies for answers to the magic number problem they created. It is entirely logical and reasonable that people would become so highly skeptical of these Rube Goldberg-type plans, especially when every time “stimulus” “needs” to be increased it is itself an acknowledgement that past “stimulus” failed to actually stimulate. I really don’t have to submit much at all to suggest a depression; reciting Krugman and other economists is more than enough of at least the theoretical explanation. 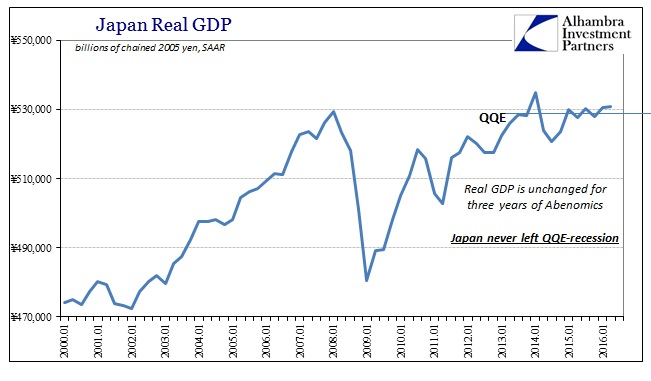 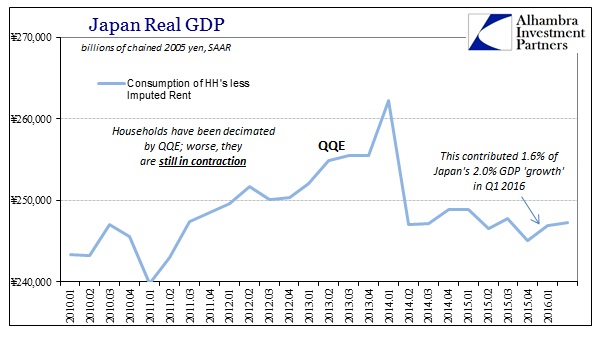