Going back to Japan for a third time today (it is more than deserved), at least in the setup, the Financial Times on August 1 astutely picked up what the rest of the mainstream media missed about the last BoJ policy moves. They correctly judged the “dollar” intentions, but also that it wasn’t nearly enough, as I wrote earlier.

However, nobody seems to be able to put all these pieces together. Staring right into the face of not just a “dollar shortage” worldwide but an intractable one at that, FT falls back on the mainstream “analyst” community to try to offer some reasonable, plausible explanation.

One interesting point: no one seems to think the main cause of the dollar-funding pressure is a decline in bank creditworthiness. We’re ready to believe that after the latest European stress tests, where most banks came out “in pretty good shape”, according to CreditSights (subscribers only). It’s not a Brexit consequence, either, according to Goldman Sachs.

Instead, it’s apparently being driven by US money-market fund rules that go into effect in October.

Though the article is a vast improvement on what is typically offered, I think the major mistake is interpreting what these prices and indications are telling us. A rising TED spread is believed to be a measure of interbank credit risk, as stated in the quote above, because that is how it is always written in the textbooks (when it is introduced at all). What the systemic break in 2007 taught us, however, was that TED had become (if not always being) more related to perceptions of systemic liquidity risk. There is a difference, as I wrote specifically on August 9.

Since that point, encompassing both liquidation waves in August and then January and February 2016, the TED spread has been on a more determined upward track as well as being more much, much more volatile as it increases. If someone can make a persuasive case that is due to 2a7 then I will quit my job and join a monastery.

Conventionally, the TED spread is believed an indication of interbank credit risk or even counterparty risk. What the events after August 9, 2007, showed, especially for those like Countrywide and Northern Rock, was that those risks also contain the element of liquidity risk. Thus, TED was not just indicating the growing interbank revulsion on the basis of solvency but rather the more immediate concern of liquidity. Both Bear Stearns and Lehman might have been insolvent, but they were never going to get that far and by the end it really didn’t matter.

What very, very few seem able to grasp is how we could possibly have rising liquidity risk in the age of global QE. The only way to square the popular perception of “money printing” with rising TED and LIBOR is to blame it on money market fund reform (2a7). If, however, you realize that QE was nothing more than futile, symbolic gestures then growing systemic illiquidity is not only quite possible but visible all over the place. 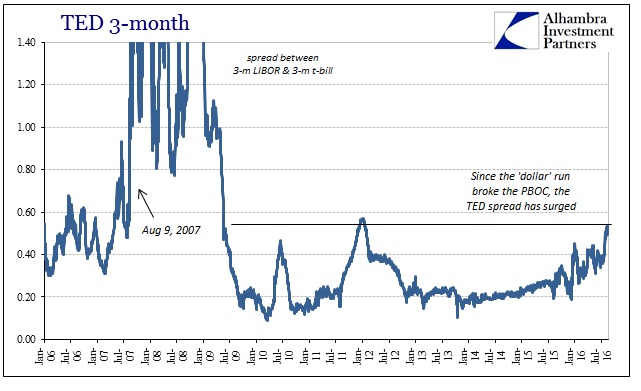 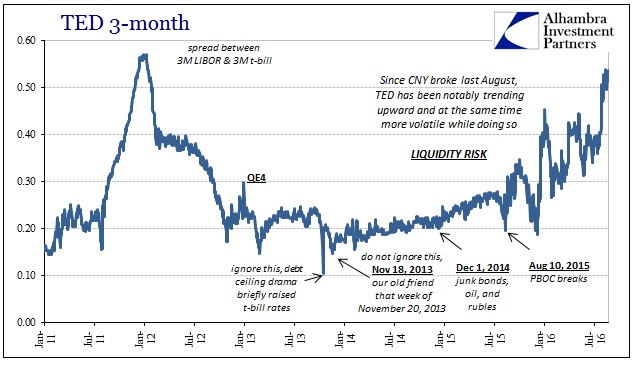 One very prominent element of this global shortage is the repo market, and it connects not just systemic illiquidity across various formats (and currencies) but also ties together the economics of the interest rate fallacy. Just today, noted economist Brad DeLong took a good swipe at Fed Vice Chairman Stanley Fischer’s claim recently that the economy is “within hailing distance” of the Fed’s targets – inflation and employment.

DeLong, unlike most economists, has been quite vocal about the actual state of the economy during this recovery; going so far as to champion the concept of the “Lesser Depression” to describe what we are seeing. Thus, his critique of Fischer was that the 2% inflation target was “not a ceiling but as an average going forward.” In other words, the Fed must not view the PCE Deflator at 2% as the end of their work, they still have to make up for lost time and activity. The way economists envision that happening is allowing inflation to revert to 2% as a mean, meaning the Fed should tolerate much higher inflation for quite some time as to snap out of this Lesser Depression.

The big impediment to that would be the bond market and its increasingly dire scenarios. In an unrelated post also today, DeLong writes that “destructively low yields” are a consequence of “mammoth safe asset shortage”; i.e., collateral. The Keynesian/wholesale fusion solution would be massive government spending predicated on borrowed funds. That would increase the level of so-called aggregate demand (as if the Japanese experience with it never happened) while also filling this vital repo market hole with a vast increase in UST supply (especially OTR).

At least on that count I would agree with him, but only in that regard. Collateral issues are undoubtedly one measure of the real money shortage that plagues the economy in this Lesser Depression, and it has very negative spillover effects in other markets and even the economy itself (as a signal of Friedman’s interest rate fallacy). But the combination of financialism and myths about central banking as it relates to perceptions of risk (low and ultra-low) lead to things like “reach for yield.” In monetary, repo terms, that meant another artificial expansion of collateral chains all over again in the worst kind of way.

Not only were dealers transforming US corporate junk collateral on behalf of much more than insurance companies, there is every reason to suspect that they, especially foreign banks in the eurodollar system, were also doing so for emerging market debt securities, too.

Federal Reserve Board Governor Jeremy Stein’s speech in February 2013, the one that contained the phrase “reach for yield”, was much more than that as he detailed this collateral transformation. In his hypothetical example, an insurance company seeking a derivative trade (tying together another component of these wholesale systems) but lacking “pristine” collateral will engage in essentially a two-way repo with bond dealers. The bond dealer, for a small spread, will provide UST’s out of its inventory in a swap for whatever junk (undoubtedly including EM junk) the insurance company might have so it can then post “pristine” UST collateral in its derivative trade – even though it doesn’t own any and none was needed to be manufactured by a massive government spending spree.

That meant the repo markets found ways to deal with the post-crisis implosion of MBS as a major source of “pristine”, AAA collateral. It, obviously, creates another angle for shortage, however, and it gives us a great deal of insight into the “rising dollar” and what happened to it on October 15, 2014, and then the aftermath (which we are still dealing with today).

As junk bonds were being repriced, especially in the first two weeks of October 2014, so, too, was this repo collateral chain in exactly the same manner as subprime MBS once was. From September 22, 2014 to October 15, the market value component of the S&P/LSTA Leveraged Loan 100, an index of the most liquid leveraged loan securities and a proxy for overall junk as well as CLO’s, fell sharply from 996 to 975. It was not only the biggest downturn in years, more than during the whole summer of 2013, it fell below the entire prior range dating back to the 2011 crisis, thus erasing in short order what might have seemed durable stability in junk…

In the first two weeks of October, however, dealer holdings sharply increased as the junk problem got worse, meaning that even dealers had reached their limit of collateral supply and were now looking to replenish for their own books at the same time the rest of the repo market was left then to fend for itself. The 12 minutes of illiquid buying on October 15, again a “buying panic”, clearly had nothing to do with computer trading.

For much more than a year afterward, the junk bond market as well as EM currencies and financial conditions remained in turmoil. What did UST prices do? They reflected increasing illiquidity in at least the form of yet another relapse in a significant part of the collateral chain brought about by the utterly silly imposition of collateral transformation in the Fed’s intended “reach for yield” world. The result? Rising global illiquidity that stretches back quite some time. 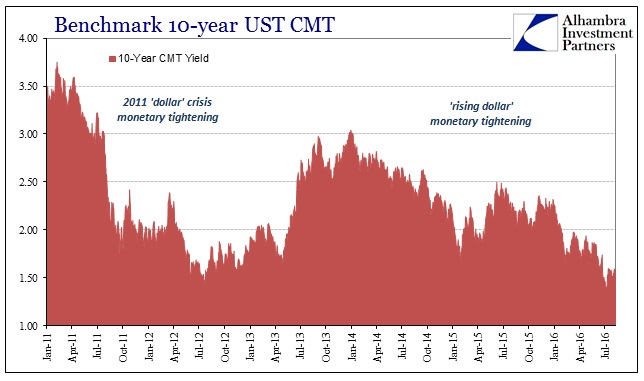 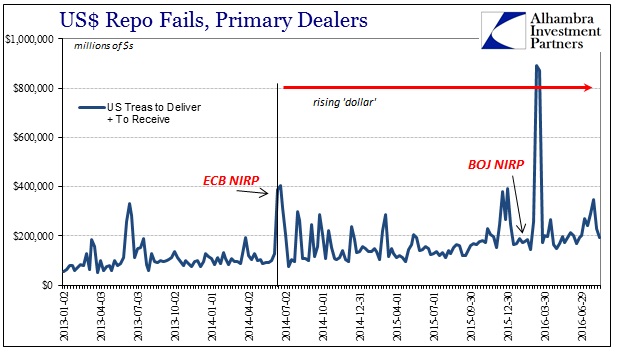 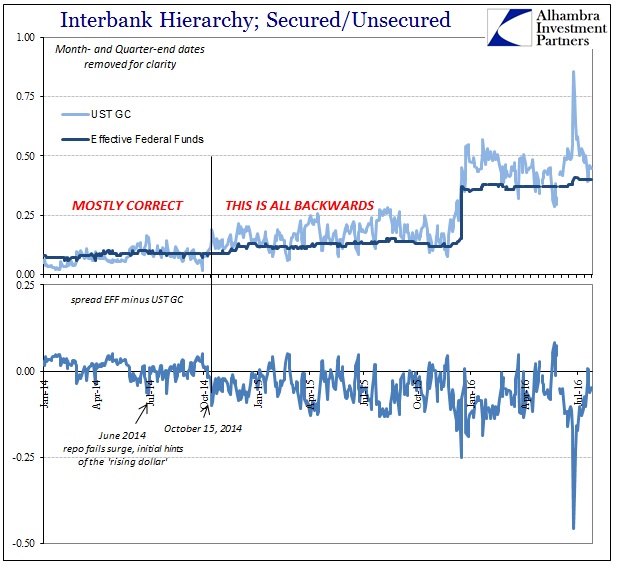 Thus, we easily identify the very liquidity risk that isn’t supposed to be there, especially as the timing relates to what we find in TED (and elsewhere, including JPY since November 2015). Further, it encompasses again the pivot between money tightness and financially expressed economic expectations – the “destructively low yields” that Brad DeLong correctly describes.

Does that mean that DeLong is right about a massive collateral infusion? Not at all. If it was just a shortage of repo collateral, then perhaps that might be a solution though I highly doubt it. The last time the Fed and US Treasury teamed up to create collateral proved wholly ineffective. But even more recently, DeLong doesn’t seem to factor (maybe he has written about it so I don’t want to be too harsh here, meaning this criticism of his criticism is limited to just today’s writing) the Fed’s RRP and its trillions of “pristine” collateral that remains, no matter how short the repo markets become of it, laughably unused.

There are, obviously, far more elements at work in the eurodollar decay beyond repo collateral. It might be the easiest to see and understand, but it is really the underlying and hidden eurodollar pieces that make for the true scale and capture of monetary contraction during this depression. As Jeremy Stein’s example showed, there are derivatives that never figure into economists’ prescriptions, even those who are better-versed in the wholesale money of the credit-based global reserve currency scheme.

Again, it really doesn’t take much effort to see why rising liquidity risk should be taken at face value long before getting into cross currency basis swaps and Asian “dollars” destroyed by BoJ and ECB NIRP. For the third time today: 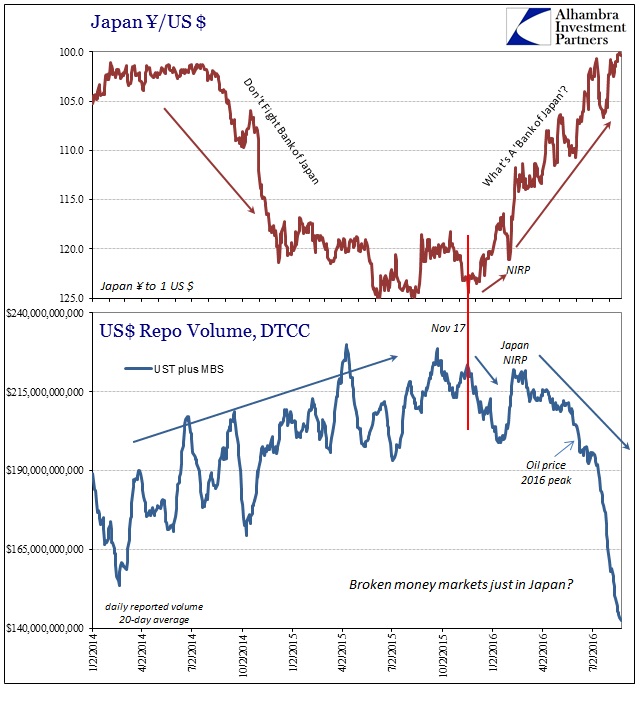