The Product of NIRP: Exposing Psuedo-Science

The Product of NIRP: Exposing Psuedo-Science

It wasn’t the introduction of statistics that led to the dire state of “science”, rather it was the jettison of common sense in favor of, and the total deference to, statistics. This was not a single event or a clean break, of course, as it happened slowly over decades. But in the 21st century what is often talked about and written up as science is almost exclusively some form of statistical study.

The true measure of science is repeated observation leading to prediction that can be replicated by anyone anywhere. While a gold standard for scientific inquiry, it just doesn’t apply so readily in the softer sciences of the humanities. Quantum physics has made a significant contribution to our daily lives from nothing more than statistics, even over the objections of luminaries such as Einstein, because the math works; repeatedly. In economics, there is nothing but a sea of variables increasingly disconnected from the world common sense still inhabits.

The August 28, 2015, edition of Science magazine, Volume 349, Issue 6251, featured a study of studies in psychology. Selecting 100 published experiments from three “high-ranking” psychology journals, authors sought to replicate the findings in each but ran into great difficulty in doing so. In fact, in only one-third to one-half of them could they obtain the same results at near the same levels of significance. In the abstract, they point to the increasing disconnect between “science” and perceptions of science:

Scientific claims should not gain credence because of the status or authority of their originator but by the replicability of their supporting evidence. Even research of exemplary quality may have irreproducible empirical findings because of random or systematic error.

Appeal to authority is one of the biggest logical fallacies, yet it will always persist because it’s easier to assume a person obtains an important position based on merit and some relevantly minimum of how they know what they are doing. In the case of published journals, peer-review is believed a meaningful gate to manage the quality. Yet, there is any number of incentives that lead to the opposite problem, as the study of studies suggests.

This is the state of economics, where all orthodox economists survive on credentials and status. Central bankers, in particular, are given immunity from scrutiny no matter how severe they fail (and how often). Quantitative easing is perhaps the biggest boondoggle economics ever invented – it was neither “quantitative” (how could it be if it had to repeated once let alone over and over?) nor “easing.” But no matter how much it is shown in evidence to be only that, central bankers fall back on their authority to make the same claims repeatedly without any mainstream challenge. No economist will criticize a central bank because that would mean criticizing economics; it is ideology, not science. Peer review is not a robust means of enforcing standards; it is a rigid structure demanding conformity.

The imposition of negative interest rates falls into the same category as QE, though observations of it can be more esoteric and therefore more challenging. The European Central Bank first experimented with NIRP in early June 2014; I stated yesterday that I believe it was a major factor in igniting the “rising dollar” due to how NIRP penalizes the basic money dealing activities that are associated with global wholesale liquidity. European money markets illustrate this point. 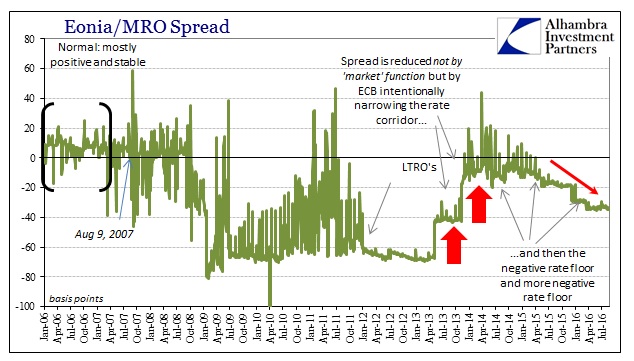 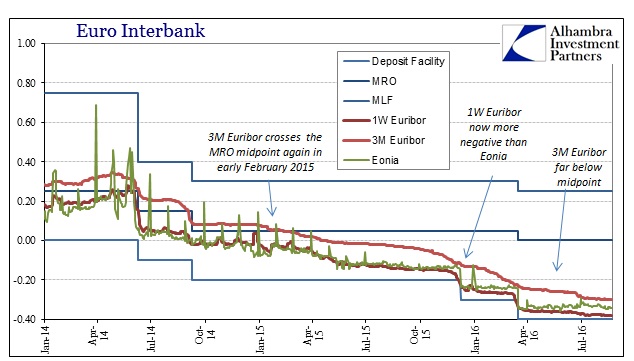 Without a template for how money markets are supposed to look, the charts above don’t do justice to just how much of a mess this is. 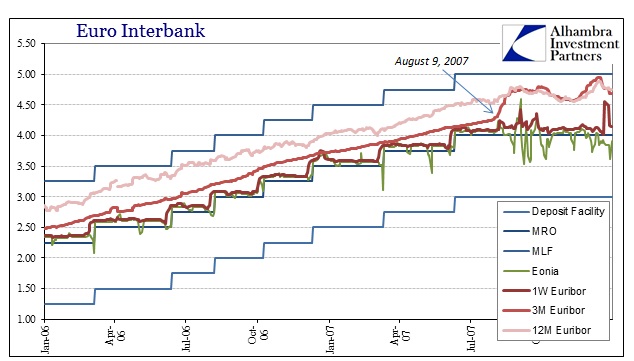 What we find here in pre-August 9, 2007, format is ordered hierarchy that is derived from stratified, meaningful risk perceptions. The MRO functions as both the midpoint in the corridor but also the main money rate of ECB policy because it is a collateralized rate. Thus, Eonia, an unsecured, overnight regime, should trade at a premium to reflect the risk of unsecured vs. secured. Further, different maturities of Euribor should also trade at positive premiums to both Eonia and the MRO to reflect the increased risk of the time component (time value of money matters, and should matter a great deal in functioning economies).

Since August 9, 2007, European money markets have not been reordered back to this natural state. The disarray has only been increasingly imposed by a more desperate and enlarged monetary policy response that never gains its intended posture – in finance let alone economy. Not only are the rates increasingly negative, but more problematic from a fundamental money standpoint they make no sense. Eonia is far below the midpoint, but so are all Euribor rates! Twelve-month Euribor is now less than the MRO even after the ECB’s last “rate cut” that brought their main policy rate midpoint down to zero! 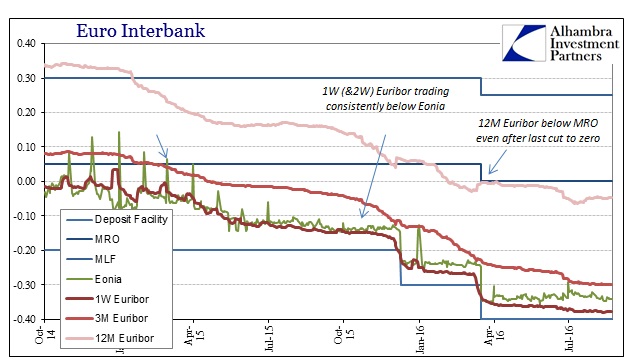 In addition, overnight Eonia is above 1-week, 2-week, and even 1-month Euribor. Is that meaningful? It isn’t exactly straightforward what that means at all, because when you write that Eonia is “above” 1-month Euribor it literally only denotes that the former is less negative than the latter. In the context of money market hierarchy and ordered risk, what does that even mean?

In very general terms, we can reasonably interpret these conditions as money markets in euros as being completely screwed up. That may be an unscientific conclusion, but as I wrote at the outset we still inhabit a world of common sense and that is the common sense version.

To economists and policymakers, however, meaningless disorder should lead banks to get out of these inert short-term, near-riskless accounts for the beneficial financial acts they associate with economic growth – lending that leads to increasing economic activity reflected in more and more inflation. Instead, what we find in and of messed up money markets is contradictory recalcitrance.

For example, the deposit rate floor is the main action of NIRP, the first tier of the money market corridor to sink below zero. The theory behind it is quite simple, to penalize banks for maintaining “money” at idle. Rather than leading to a growing disdain for holding balances within the deposit account, the ECB’s balance sheet and liquidity data shows quite the opposite instead. Once again, theory does not match reality. 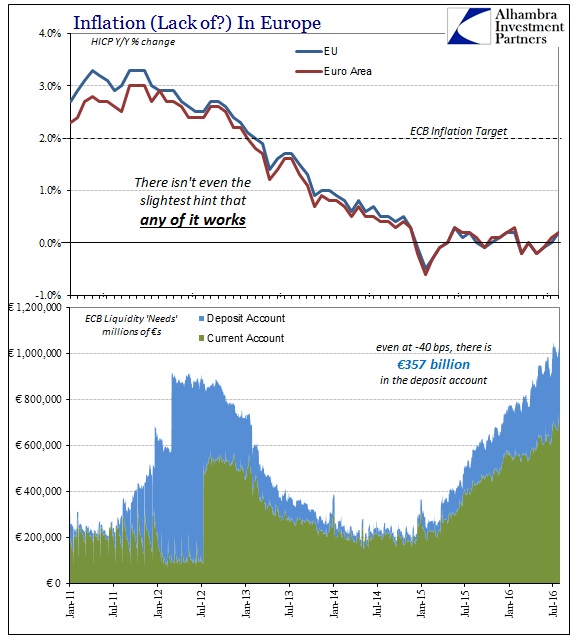 Even though the deposit rate has been ratcheted more negative since June 2014, the balances parked in it have only grown; now at nearly €360 billion. That single balance is all the evidence necessary to disprove NIRP (or the IOER, but that’s a corollary that will be saved for some other time). Economists, however, are unmoved by the evidence seeking instead to simply find the magic number of NIRP that will suddenly reverse the obstinacy and lead to the conclusion they have predetermined valid. So far, the ECB is at 40 bps without having found that magic number, but the real cost is in the extreme distortions of the euro money markets.

And so it is a surprise only to policymakers and the media that what seemed a simple theory just isn’t plausible. It all falls apart on Step 1, unsurprisingly leaving none of the other expected outcomes to be found. Whether lending, inflation, or just GDP, if you didn’t know anything about QE or NIRP or when they started you would not be able to guess by examining lending, inflation, or GDP. How is that possible unless monetary policy fails in every way possible? 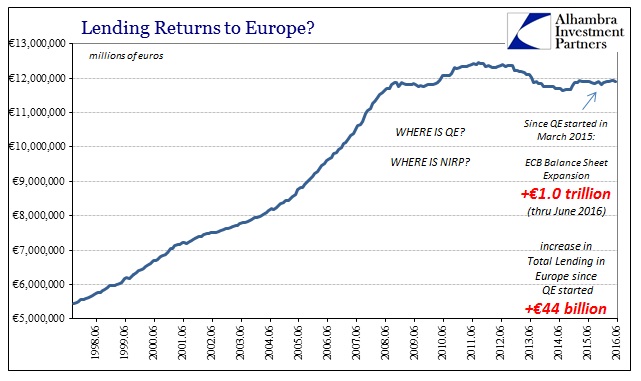 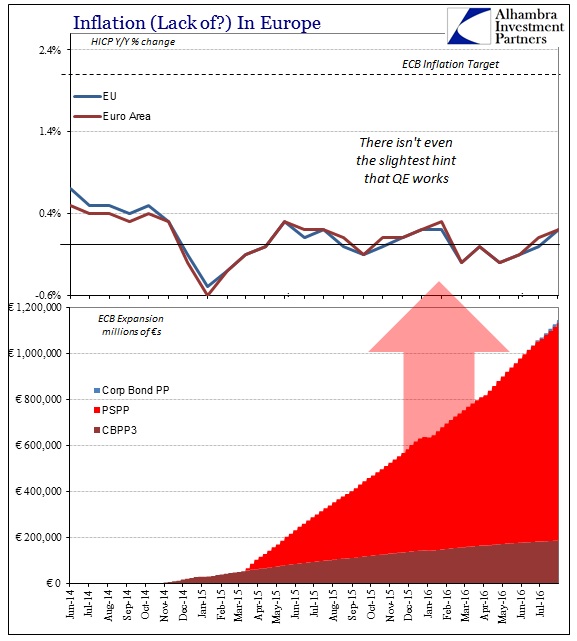 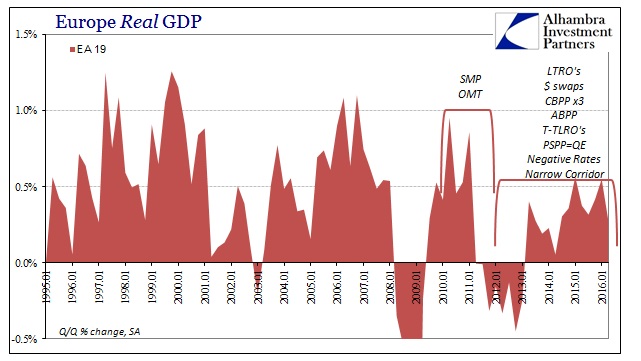 Without actual growth, none of Europe’s more stubborn problems can possibly get fixed; including the more extreme imbalances like Italy’s bad loan proportions. Despite all this evidence (and the good amount of sense it makes) we are still forced by mainstream outlets to think only in credentialed terms:

Italy’s economy unexpectedly stalled in the second quarter, which will further weigh on Prime Minister Matteo Renzi as he prepares for a referendum on which he has staked his political future.

Money markets are so messed up that they don’t make sense in really any dimension and relatedly Italy’s banking crisis has been the subject of constant news and speculation this year, but Italy’s economy “unexpectedly stalled?” The European economy, as the American or Japanese or Chinese, has been stuck within the bowels of pseudo-science that refuses to be purged by honest interpretations. There was absolutely nothing unexpected about Europe’s latest GDP numbers, Italy included, even though that suggested yet again absolutely no boost or benefit from QE, NIRP, and everything else the ECB has thrown into the maelstrom.

The European Union’s statistics agency confirmed on Friday that the 19-country eurozone economy grew 0.3% in April through June, as previously estimated, a slower pace than its 0.6% expansion in the first quarter. Previous data releases from the currency bloc’s other major economies showed that France stagnated in the second quarter, while Spain grew 0.7%.

The data, although uneven across countries, show that much of the eurozone economy was already losing steam this spring, even before the U.K. voted to leave the EU in late June, a development that many economists believe will hit growth on the Continent—although less so than in the U.K. itself.

Not only is monetary policy devoid of money, the evidence increasingly points to monetary policy being destructive toward it. As the word “stimulus”, monetary policy isn’t a real concept, it is only the tortured logic of rigid mathematics and statistics; equations that to economists are more real than the mess they make. Credentials and the logical fallacy about them are all that keeps this going. 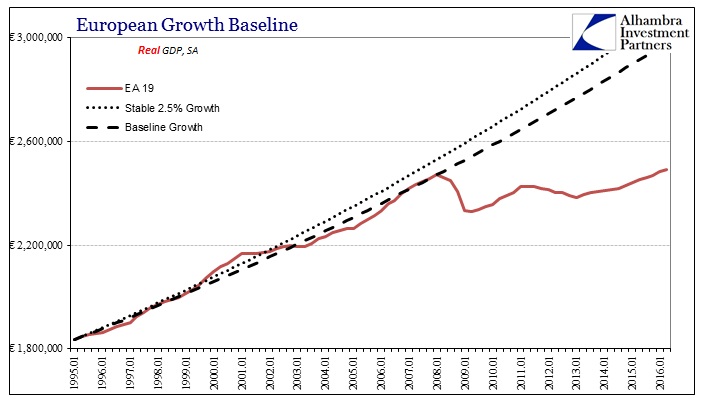 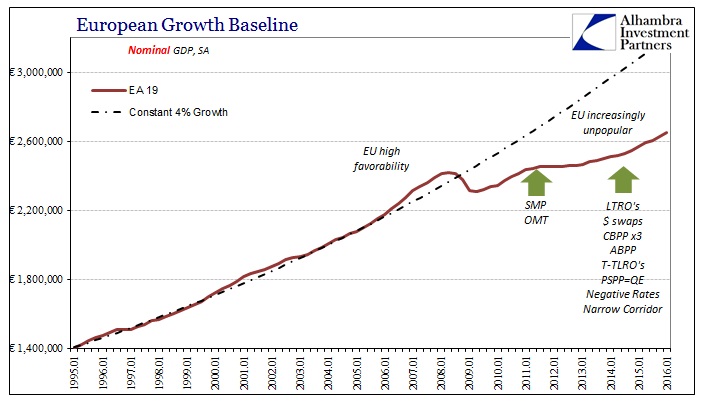