There is validity in (not “to”) the myth of central banking, one that has important and very serious implications right down the smallest and most immediate terms. The first task of every central bank was currency elasticity, which simply meant the bank would endeavor to supply (at penalty rates, according to Bagehot, such that banks do not fund themselves on central banks but private money) sufficiently what the private market might not in periods of distress. It wasn’t meant necessarily to bail out institutions, but rather to keep money from being the central issue in any economic crisis.

This primal relationship of money to economy was predicated on hard experience. In Bagehot’s own institution, the Bank of England, it was incorporated into the very building and to the room in which monetary policy was formed in the early industrialist economy. As the Financial Times recalled in May 2007:

High up on the wall of the Court Room at the Bank of England is a dial, linked to a weather vane on the building’s roof. Now a novelty for visitors to the Bank’s grandest function room, knowing the direction of the wind was a deadly serious tool of monetary policy on its installation in 1805.

If the wind was coming from the east, ships would soon be sailing up the Thames to unload goods in London. The Bank would need to supply lots of money, so traders could buy the wares landed at the docks. If a westerly was blowing, the Bank would mop up any excess money issued to stop too much money chasing too few goods, thereby avoiding inflation.

It’s not just a cute story about ancient times, it speaks directly to the basic and necessary connection between money and economy in whatever forms the former might take. In the modern system the relationship might be several layers removed, but it remains even if now more a matter for banking and banks than ships sailing up the Thames.

The difference between 2006 and 2007 was first that money market participants in the eurodollar learned the hard way that the Federal Reserve had no backstop abilities. It was taken for granted that they had, a myth that went unchallenged the entire eurodollar evolution until August 9, 2007. When unsecured markets fragmented, that was, essentially, the practical outcome of figuring out the Fed was not going to (indeed could not) overcome the geographical divide (even the dollar swaps of late 2008 were no deterrent to the last liquidation or crisis leg in early 2009) – let alone the dimensional divide of the eurodollar system across all its various capacities (including derivatives like interest rate swaps).

The difference between 2015 and 2016 may be that more people outside of money markets now question the abilities of central banks to perform their basic monetary duty. Central bankers from Janet Yellen to Mario Draghi had for years particularly after the recurrence of “extraordinary” monetary policies in 2012 claimed that at least the global financial system was put right. Global liquidations starting in August 2015 brought the issue to the mainstream forefront, and not in a positive way for faith in monetary outcomes; that the problem seemed (and did) to radiate from China of all places only elicited more questions.

Those have simply gone unanswered as it all happened again in early 2016. If we are to break down the past near decade in very simple terms, it’s as if people who had never heard anything about the eurodollar suddenly became aware of it if only in the vague terminology of “shadow banking” in 2008. Ben Bernanke told everyone not to worry, that the Fed and its fellow institutions would take care of it, and so no more attention was paid since the myths still carried a great deal of public faith.

The recurrence in 2011 and into 2012 reduced that faith, but by and large when central bankers again declared that there was nothing to worry about there was little resistance to them nor any further questions about the shadows. The “rising dollar”, it seems, has been like “strike 3” to a great many, including credit and funding markets themselves. We are back to the situation where there is a functional disconnect between central bank promises for the backstop and the realized reality of it as still nothing more than a myth.

In the parlance of central bankers, this divergence of function is talked about as “monetary transmission” which is really orthodox terminology of “what we are doing isn’t doing what we thought it would.” Over the years, central bankers have come up with various excuses to explain the “clog” in “monetary transmission channels” but here we are with the discussion still highly relevant, meaning the excuses were never valid. In other words, they never solved it, and thus the idea of Ben Bernanke or now Janet Yellen (or Mario Draghi, Haruhiko Kuroda, or any of them) pleading to “trust us” so as to still not worry about the shadows rings ever more hollow.

One such central banker was Yves Mersch, Luxembourg lawyer and member of the ECB’s executive board since 2012. He was there for the initial aftereffects of the LTRO’s and quite acquainted with how they were “supposed” to work. In a speech he gave at a UniCredit function in June 2013, he referred to “transmissions” as a matter of the 2011 recurrence.

During the crisis it emerged that, in some places, the transmission of our monetary policy signals to the real economy was restricted or uneven. In central banking we speak of a distorted monetary transmission mechanism. We therefore took non-standard measures so that our monetary policy would be more effectively passed through to the financing conditions for the real economy.

These nonstandard measures complement our traditional set of instruments. Put simply: our interest rate decisions are aimed at price stability. The non-standard measures seek to ensure that the desired effect of these decisions also spreads across the entire euro area.

In short, ECB liquidity efforts would ensure that banks could operate with no uncertainty regarding the monetary backstop and would thus feel free to expand monetary influence into the real European economy; which, at that time, Mersch expected to happen:

What the central bank has to do is to ensure that the transmission of monetary policy functions properly again. The instruments we need for doing so are at our disposal.

But just as the most recent Jackson Hole gathering was a collection of deep central banker worry, Mersch has recently changed his stance. As the Wall Street Journal reported earlier this month:

But Mr. Mersch cautioned against “academic proposals [that] seem to prefer sophisticated models to social psychology.”

“We cannot fulfill our mandate with mathematical equations, but only with instruments that maintain trust in the currency,” Mr. Mersch said at an annual economic forum on the shores of Lake Como, Italy.

In other words, the monetary transmission remains clogged and central bankers have been forced to suggest even more esoteric “extraordinary” methods to clear those channels because the prior versions weren’t, apparently, extraordinary enough. To policymakers like Mersch, and he is not alone, this is starting to go too far even for him. It may be difficult to see under all that jargon and mathematics, but central bankers are, in fact, doubting themselves. As well they should.

In a robust monetary system where liquidity isn’t a primary consideration, backstop or not, even large disruptions rarely turn into earth-shattering events. They are absorbed, participants take their lumps, and everyone moves on that much wiser (hopefully). Where liquidity is doubted and further doubtable, it takes far less disruption to turn into “something.” Participants don’t just take their lumps and get back to business, they flee the scene entirely and force “lumps” to be taken by others who might have otherwise remained unscathed or totally unrelated. The matter of distrust becomes not just one between market and central banks, but down to the smallest level participant versus participant. There is already some of that permanently built into the structure of the post-crisis shadows, where unsecured lending that once flourished before 2007 has all but disappeared (meaning a system already less robust).

There is a very big difference between this year and last, including less economic support this year versus the myths of “transitory” last year, but also in what I fully believe is central bankers on a mission to restore some lost faith. The events of especially January and February established very real doubts about all this in the mainstream even if still to this day convention hasn’t progressed much beyond “shadows.” It has meant the line of thought that traced back to Bernanke in 2008 saying “trust us, we got it” carries much less weight and has surrendered to palpably larger doubts. The world is being forced back to those same realizations only now to be put to rest perhaps for good: unfortunately for all of us, central bankers don’t and more importantly never will “have it.”

There is no money in monetary policy. The “clogged transmission channel” isn’t clogged at all, it just doesn’t exist. The global money system moved on without central banks bothering to notice. That is what all this leads to; where even central bankers have to admit the effects even if they still refuse to see the obvious cause.

What does a world where faith in that “trust us” wanes so remarkably look like? I think it looks something like this: 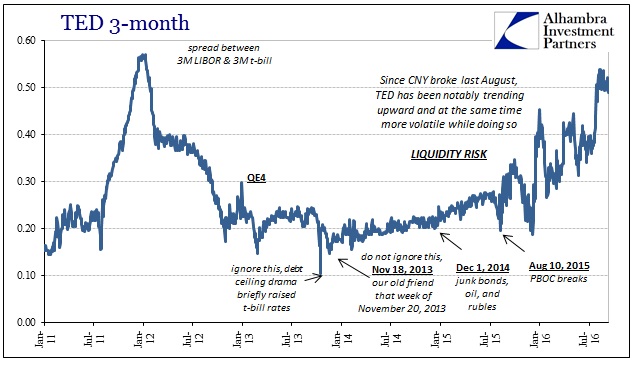