China Not China: The Greater ‘Evil’

China Not China: The Greater ‘Evil’

If it was quiet late last week with China dark for its Mid-Autumn festival, the return from holiday shattered the calm and further amplified what is already a significant problem. The activity in CNH markets continues to astound, but I still think it is domestic liquidity that is more significant. Unsecured offshore (CNH) lending (HIBOR) has all but dried up again, with the overnight rate shooting up to 23.683%; only on January 12 has the rate been higher. The 3-month rate, which is more of a benchmark and less prone to huge emotional or operational swings (more depth at 3-month offshore than at overnight or even 1-week), fixed at 5.862% and the highest since spring. 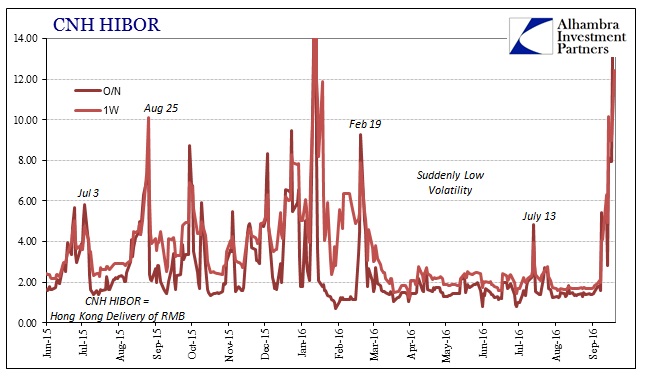 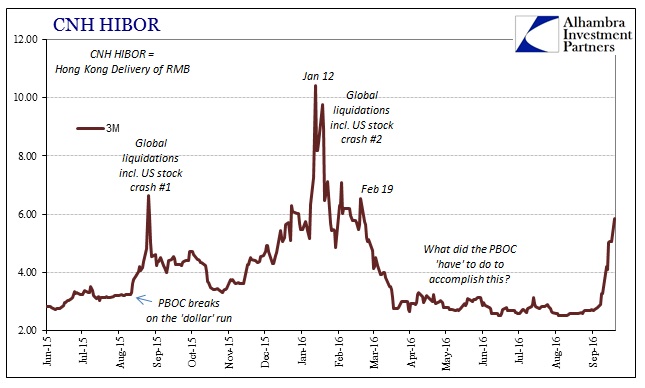 You don’t have to know anything about SHIBOR, HIBOR, or anything renminbi to understand what these charts are showing; the comparisons to last summer and winter are immediately recognizable.  Yet it is the onshore activity especially the overnight SHIBOR rate (which is practically the only rate that moves) that truly makes the comparison. The weekend saw it start at 2.14% and then fix in China trading at 2.154%, more than 10 bps above what was for almost a year a hard ceiling.

With the yuan exchange rate traded (artificially) mostly sideways to higher, it is truly tempting to see especially CNH rates as a means to control the currency (illiquidity as intentional policy targeting “speculators”). But it is the growing illiquidity onshore that continues to suggest, in my view, that this is all one connected deprivation. As much as these elements can appear overwhelmingly complex, there are actually even more facets to consider that make interpretation even more difficult and multi-dimensional. I usually keep those to less public forums (including behind our paywall) for reasons of both their more speculative nature but also as a way to manage what could easily be considered clutter.

In this case, however, I think it important to make an exception particularly about this one point. Interest rate swap trading in China relates to SHIBOR, and I believe the swap curve in O/N SHIBOR is instructive on the point what the PBOC is sacrificing. 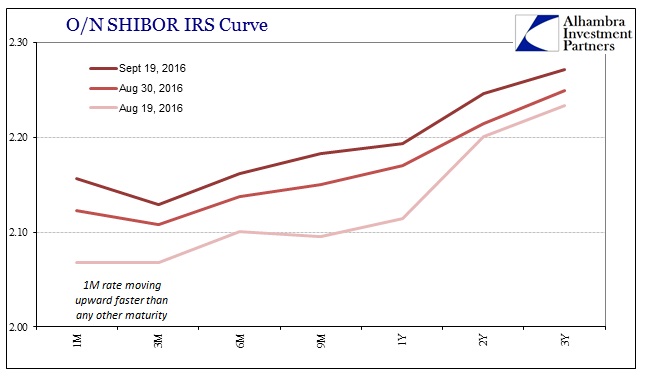 While the entire curve (out to 3 years) has moved up since mid-August, it has done so far more in the shorter-dated swaps than further out. Not only that, the 1-month maturity swaps have spiked notably higher than the 3-month; meaning that market participants are seeing the current run in O/N SHIBOR as a short run phenomenon; i.e., illiquidity. This front end “inversion” displays market expectations that the PBOC will be forced to intrude itself yet again with some kind of “easing” or “accommodation.” It is the tell-tale sign of increasing onshore trouble.

When the overnight rate first moved above 2.05% on August 30, it is also instructive in how the swap curve treated that day’s trading as if it was a policy “violation” that would be immediately rectified. The curve had been pushing higher and more toward front end inversion up to August 30, but the very next day, August 31, it dropped back into what could be considered a more “normal” posture. 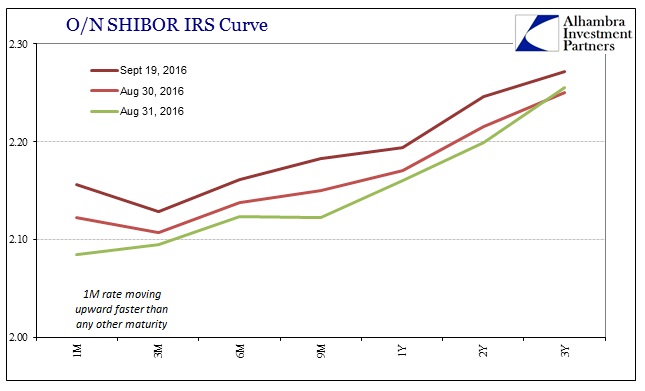 It seems as if the swap market viewed the violation of 2.05% as if triggering some big PBOC response to get it back under control, despite the fact that O/N SHIBOR fixed marginally higher at 2.065% from 2.063%. It suggests some initial confusion about what was taking place in overall Chinese liquidity; and small wonder since 2.05% had been a line in the sand for so long. To have the swap curve react in that expectation demonstrates compelling evidence that what is shaping Chinese liquidity is “something” drastically different than we have seen up to this point.

The swap market saw O/N SHIBOR creep up at the end of August and then over 2.05% and immediately expected something big to follow; the PBOC instead remained curiously and conspicuously silent, and so Chinese “money” has only escalated ever since. 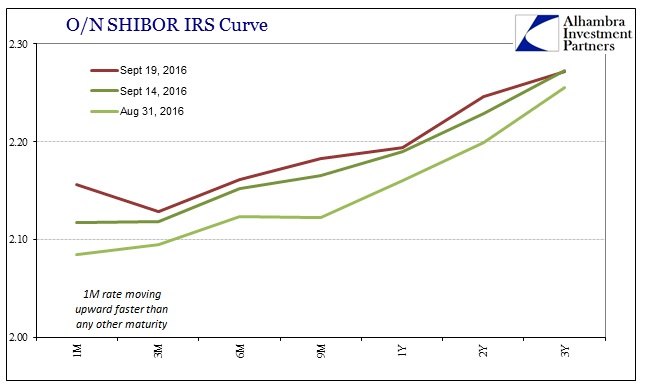 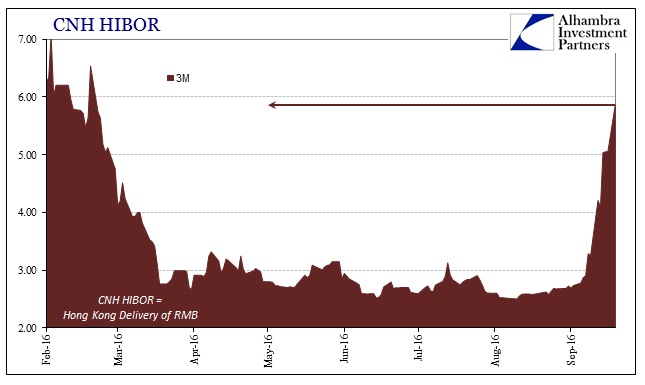 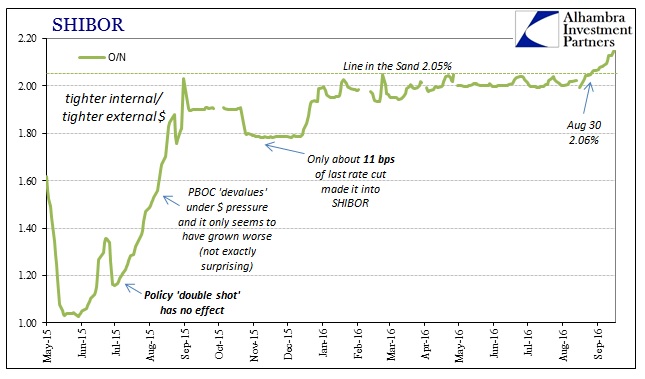 The entire swap curve was pulled higher and flatter at the front but it wasn’t until Sunday night and Monday trading that the 1-month IRS jumped almost 4 bps compared to just 1 bp in the 3-month maturity. And since these interest rate swaps are priced in SHIBOR, not HIBOR, it suggests that there is an evidently large liquidity problem onshore that just so happens to be occurring at the same moment offshore liquidity rates have surged. It doesn’t appear to be the PBOC targeting “speculators”, rather the Chinese central bank seems to have re-prioritized to the dollar exchange rate (CNY) no matter how bad it might become for RMB liquidity in any geography. 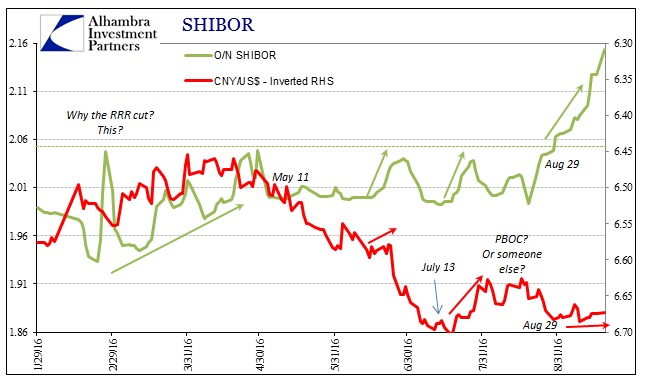 As you can see on the chart immediately above, when SHIBOR spiked toward 2.05% at the end of February the PBOC responded by cutting the bank reserve requirement another 50 bps, and thus adding to onshore RMB liquidity (that wasn’t the only liquidity measure the bank used). This or something like it seems to be what the swap market was expecting on August 31 and thereafter, only to be further subsumed by confusing “tightening” without any word let alone policy action from monetary authorities.