As noted earlier today, the bond market is not truly a mystery or middle. In very simple terms that even Alan Greenspan might be able to understand, rising inflation and economic opportunity are reflected in higher interest rates and a steeper yield curve; full stop. The bond market, however, does not possess a crystal ball and thus must rely on interpretations to make judgments about the possibilities of economic conditions in the future. What is truly significant about the behavior of the treasury market, in particular, before and after 2011 is that it shows a more determined shift about which cues are deemed important.

In both QE1 and QE2, treasury rates responded almost immediately upon their announcements, but not in the direction everyone seems to somehow still believe. Though the Fed was buying up bonds especially UST’s in both programs, UST rates rose, which is actually what you would expect (and one reason why “forward guidance” in its original format was thought up). The bond market fully believed in central banking especially “money printing” and began trading as if the anticipated results (higher inflation and more economic opportunity) were a foregone conclusion (the myth of the “maesto”).

The belief was rudely interrupted in early 2010 particularly that May, but the Fed was given another chance with QE2. What happened in 2011, however, started this more permanent alteration in how the bond market would now set and take expectations. The reason for it was in forced deconstruction as to what quantitative easing actually was in sharp contrast to what everyone believed(s) it was (is). As I wrote earlier this year, in the mainstream there is still very little awareness let alone appreciation for the dramatic revelations about 2011:

Obviously we are missing “something.” M1 money supply, which includes all of M0 “base money” like bank reserves at the Fed, had grown from $1.767 trillion at the start of QE2 in November 2010 to $2.11 trillion when two undisclosed European banks were suddenly and again near the brink. Which was more monetary: bank reserves that increased as the SFA declined, or the SFA collateral in repo? It is debatable, of course, but the events of that summer come down far more in favor of the latter.

The bond market, as funding markets, was forced to consider this question by default; the Fed had purportedly “printed” an enormous amount of “money” (twice), so how could another monetary crisis even be possible?

The debt ceiling drama and uncertainty was resolved on July 31, 2011. In the midst of that, asset markets had already been under pressure, with even US stocks enduring what looked like another systemic liquidation into early August. Then in early September, US “dollar” repo markets suddenly braced for perhaps a secondary systemic event, with fails surging to $462 billion, ten times the amount from early July and comparable only to 2008 and 2009 (without factoring the 3% fails penalty). The same exact week, the Swiss National Bank shocked the world by pegging the franc to the euro, which doesn’t seem much to do with dollars. The week after that, however, the ECB, the Bank of Japan, the Bank of England, the Swiss National Bank and the Fed announced a coordinated “auction” of “dollars” in three-month maturities at “full allotment.”

Even the behavior of monetary authorities in later 2011 belied everything that was supposedly known about money and monetary policy. The interim chaos between QE1 and QE2 could possibly have been related to not enough “Q”, and thus perhaps fixed by a second dose, but what happened in 2011 began to call into question more importantly the “E.” The 10-year UST CMT yield that had been as high as 3.75% in February 2011 under renewed hope of the effects of more “Q” had by the time of those renewed global “dollar” policies that September dropped all the way to just 1.75%.

At the time, as usual, the media claimed that those sharply declining rates, condensed into a mere six months, were in response to expectations for more QE when in fact the treasury market was starting to reject QE on both its terms.

Again, as noted this morning, the response to the announcement and even the start of QE3 was conspicuously muted. The 10-year yield, for example, stuck to a tight range between 1.70% and 2.00% even with the addition of QE4 that specifically targeted more UST buying on the part of the Fed. It wasn’t until the concept of tapering the QE’s that rates rose; not because the Fed was going to be buying less UST’s, as it was the media who came up with the “tantrum” signature, but because the bond market registered the confidence of the Bernanke FOMC in tapering QE as a significant signal about the future economy. If monetary officials had been sufficiently assured by it to that point, the bond market had to consider the possibility that they were right.

But even as UST rates rose that summer, they never achieved the same levels as the peaks in hope during the QE episodes before. In fact, in these cycles between lashing back and forth between policy questioning and policy faith there was an obvious reductionism to it where one side was clearly emerging the winner; the UST market increasingly accepted ineffectiveness and responded less and less to faith/hope. 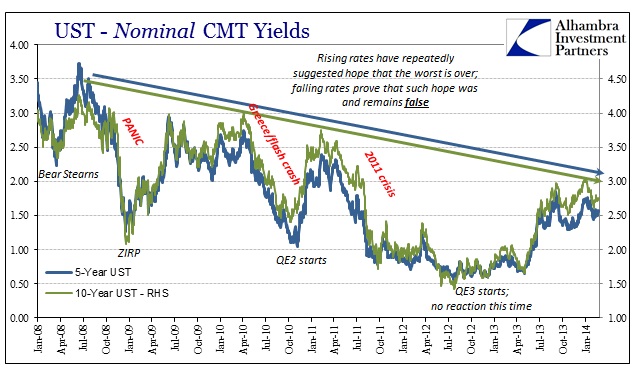 The reason for that was even more basic and simple than what constitutes money or monetary policy. The US economy, as the global economy, was only ever falling more and more behind. The bond market was recognizing that fact not in the quantitative manner I present below but more so as intuition derived from a more comprehensive review of actual fundamental conditions including the state of money. Rates overall have been on a declining trend because the economy has. Financial actors in the UST market have not sketched out the exact amount or times by which this has taken place because they don’t have to. Over time, evidence has built up that this is the reality. What was perhaps more ambiguous to start with, like QE itself, has become much less so with the “benefit” of time and hindsight (not to mention logic and common sense). 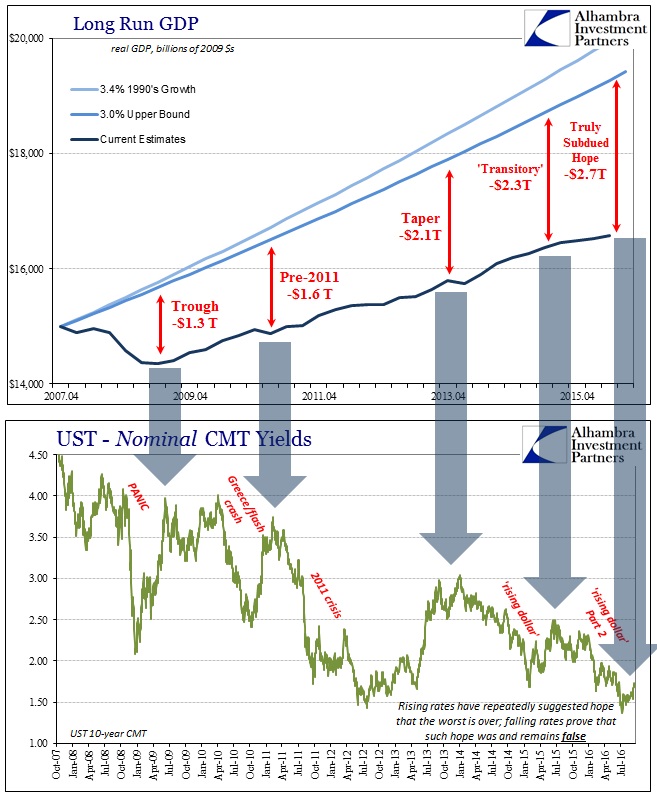 Every time the bond market wants to recognize recovery potential it does so with the understanding the idea of recovery itself had already been reduced and then even more so at the next one. Thus, when the taper “confidence” of 2013 was in full bloom, the 10s never got much more than 3% in yield, whereas in the aftermath of the Great Recession the uneducated hopes about QE1 had pushed it back up to 4%. In other words, it wasn’t just questions of money, but how those questions were creating economic “headwinds” that markets increasingly have realized monetary policy would and really could never solve.

While economists continued to argue otherwise especially in 2014 and 2015, on Wednesday even the FOMC published findings of its models that are coming to these very same conclusions. And even in the latest bond selloff we find what remains of these patterns. Very broadly, the selloff in late August in UST’s and other sovereigns was like a mini-taper “tantrum” where certain conditions in monetary behavior made it seem perhaps as if not only a rate hike was on offer but maybe, just maybe even slightly justified.

And just as the Fed “chickened” out, the bond market has so far reacted to the confirmation of very low confidence in the economy just as it has since 2007. The 10-year CMT is back down around 1.61% today from an extremely low high ten days ago of just 1.73%. Interest rates, the economy, and even inflation (providing more monetary confirmation) are all moving in the same direction if not always at the same time, powerful synchronization that is compelling in its negative narrative about the future. 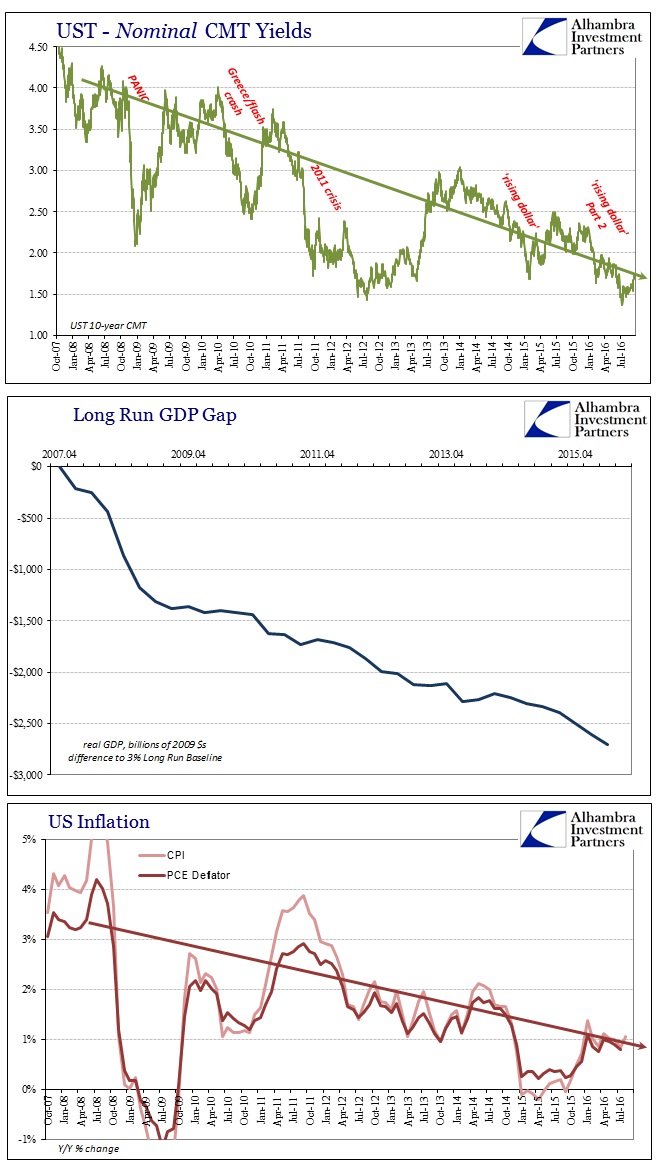 This is not the work of ZIRP or QE or monetary policy in any capacity except failure. It is the reality of money and economy, where the former has been increasingly stripped from the latter all the while central bank authorities have believed the opposite – and the media reporting the belief as fact. The bond market at its core is money, meaning inflation and opportunity. So long as there continues to be less of both, the only result can be lower interest rates on the whole. Even the Fed knows there is no opportunity (see below), so it is only a matter of time before they have to admit the money part the bond market started to figure out five years ago. 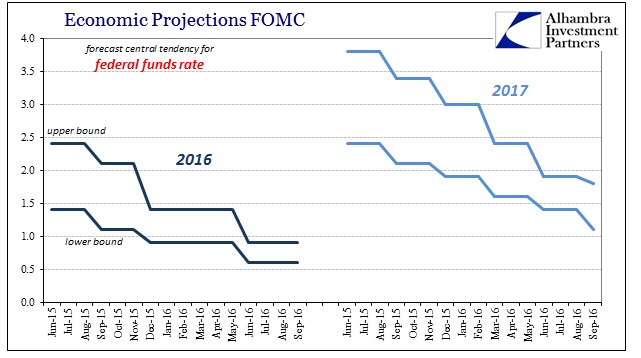 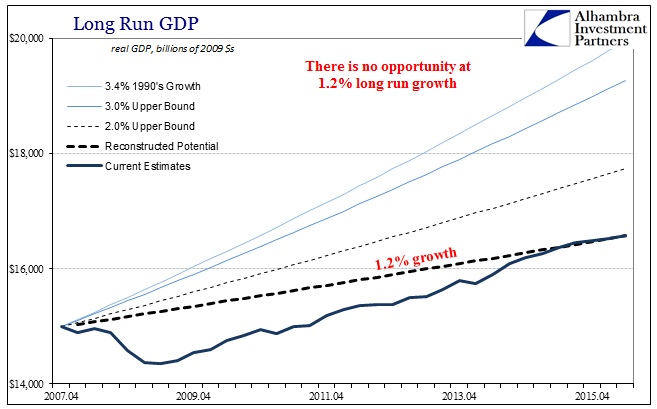