No Need For Yield Curve Inversion, There Is Already Much Worse Indicated

No Need For Yield Curve Inversion, There Is Already Much Worse Indicated

Though I highly doubt he will admit it, he’s just not the type, even Ben Bernanke knows on some level that bond market is decidedly against him, or at least his legacy. Economists have a funny way of looking at bonds, decomposing interest rates into Fisherian strata. To monetary policy, interest rates break down into three parts: expected inflation over the term of the security; the expected path of real short-term rates; and the residual term premium. Policymakers love to focus on the last one even as (or especially because) it is the most esoteric.

To gain monetary “stimulus”, officials believe that they must arrest and reduce term premiums. What is a “term premium?” It is what economists believe is the extra return a bondholder demands in order to hold a longer range fixed income instrument. In other words, all else being equal (as economists like to surmise) where the path of real short-term rates is the same as are inflation expectations, the term premium determines where an investor will buy a bond in maturity versus something shorter or longer. Economists like Bernanke argue that term premiums are high where risk is perceived to be high; in other words, you have to be compensated that much more for holding a bond for that much longer.

From that perspective, term premiums make sense in a monetary policy setting, as does the surface considerations for QE. If QE can affect long-term rates while holding the others equal or better, that suggests lower risk of investing overall.

The trouble for policymakers is that on this side of the Great “Recession” we don’t even need to account for the academic posturing. On March 20, 2006, new Federal Reserve Chairman Ben Bernanke discussed the unusual nature of low interest rates of that time. Alan Greenspan had left Bernanke his “conundrum” where he raised short-term rates considerably (in his view) but longer rates failed very conspicuously to follow. In a speech to the Economic Club of New York, Bernanke noted this disparity:

For example, since June 2004, the one-year forward rate for the period two to three years in the future has risen almost 1-1/2 percentage points. As the ten-year yield is about unchanged even as its near-term components have risen appreciably, it follows as a matter of arithmetic that its components representing returns that are more distant in time must have fallen. In fact, the one-year forward rate nine years ahead has declined 1-1/2 percentage points over this tightening cycle.

The question was about how to interpret the apparent inconsistency. To Bernanke, it was a matter of breaking down the constituent parts of rates:

To the extent that the decline in forward rates can be traced to a decline in the term premium, perhaps for one or more of the reasons I have just suggested, the effect is financially stimulative and argues for greater monetary policy restraint, all else being equal. Specifically, if spending depends on long-term interest rates, special factors that lower the spread between short-term and long-term rates will stimulate aggregate demand. Thus, when the term premium declines, a higher short-term rate is required to obtain the long-term rate and the overall mix of financial conditions consistent with maximum sustainable employment and stable prices.

This was not the only possibility (and again there are serious doubts as to just how realistic this view actually is). Juxtaposing that more hopeful condition against another scenario, Bernanke gives us his own answer to the current predicament delivered long before its appearance.

However, if the behavior of long-term yields reflects current or prospective economic conditions, the implications for policy may be quite different–indeed, quite the opposite. The simplest case in point is when low or falling long-term yields reflect investor expectations of future economic weakness. Suppose, for example, that investors expect economic activity to slow at some point in the future. If investors expect that weakness to require policy easing in the medium term, they will mark down their projected path of future spot interest rates, lowering far-forward rates and causing the yield curve to flatten or even to invert.

In terms of Fisherian decomposition of longer term interest rates, this means that where the expected path of short run real rates is low and gets lower then reduction in long-term rates is not helpful via lower term premiums but increased (perceived) risk accompanying that mark down. Typically we see this behavior where the UST curve inverts, but that is not the only way to observe it; and I would argue, given the state of short end activity, it is not the correct way.

In fact, there is an alternate method to derive what might be the expected path of short run rates, real or otherwise – the eurodollar futures curve. In the last nearly three years of this “rising dollar” and its preceding months, the eurodollar curve has not just flattened but done so in remarkable fashion. What it suggests about both the time value of money and overall risk/opportunity is nothing short of alarming. It qualifies in every way for Bernanke’s definition of “if investors expect that weakness to require policy easing in the medium term, they will mark down their projected path of future spot interest rates.” In the case of eurodollar futures, though they are not connected to spot rates but 3-month LIBOR, it is perhaps a more appropriate substitute (we could also use the OIS curve, as its history accomplishes the same result). 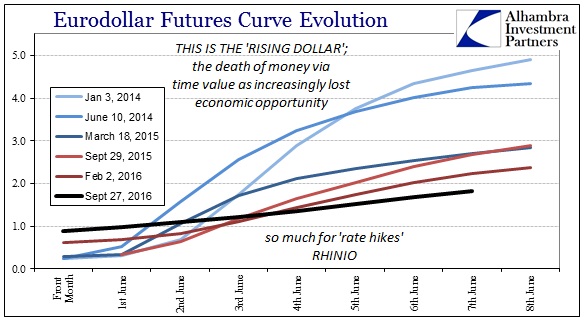 What was once a curve is now not. It has become a straight line that serves as a reminder of the death of money and time value, two key components that more than suggest risks and (lack of) opportunity. The yield curve doesn’t invert because current short rates are already near zero, so the decomposition of far forward expectations of spot rates indicates a huge increase in risk perceptions. From that view, falling longer-term rates simply confirm the worst regardless of inversion.

We don’t find declining term premiums leading to “stimulus” as the media presumes, rather we see a yield curve increasingly comfortable with the idea that there has been and likely will be no such thing. In other words, short-term rates get stuck around where they are now and the consequences are increasingly no economic opportunity for it. Even as the eurodollar futures market reacts to expectations of perhaps another “rate hike” in the near future, the only potential effect on the full futures curve is to further flatten it out beyond its already massively distorted condition.

The bond market selloff of the past month or so, which has apparently fizzled just as Alan Greenspan was assuring the world it was only getting started (once more preserving for posterity how little he knows about bonds, interest rates, and money, as if knowing anything about any of those would be useful to a central banker), has been, I believe, a microcosm of these forces at work if in reality as opposed to the academic manner in which policy and orthodox views take them. In other words, as the UST market was selling off and nominal rates turned slightly higher and the curve steeper, the eurodollar futures curve moved in sympathy.

From Bernanke’s own formula, that meant as rates were rising one significant view (I would argue the only view) of the expected path of future short-term rates was also rising. The eurodollar futures curve was decompressing into higher calendar spreads, suggesting that the appearance of higher nominal rates for UST’s was not an increased view of risk but rather a decreased view of it. 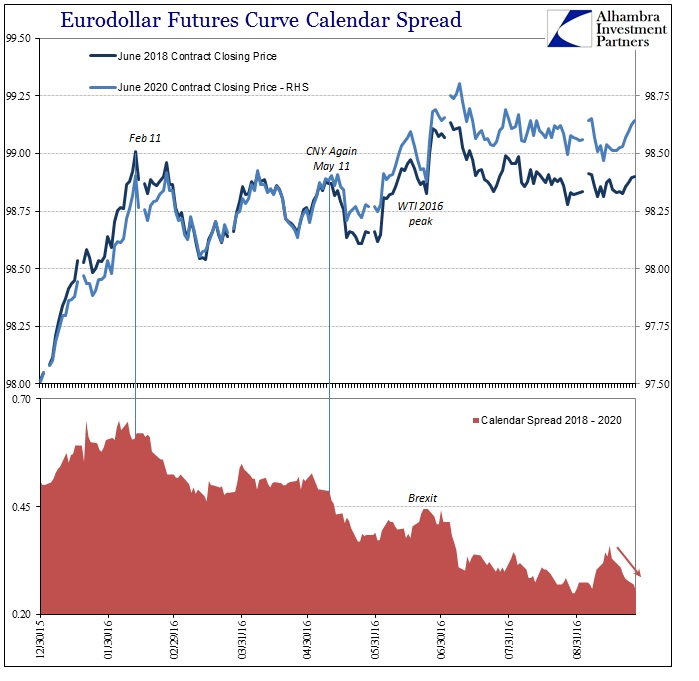 Conversely, since Greenspan’s appearance, nominal rates have fallen back as have calendar spreads of eurodollar futures. Before the selloff had completed, it was thought that the Federal Reserve might undertake a second “rate hike” which would confirm the judgment of lower risk (an eventual higher anticipated path of short-term rates) whereas since the bond selloff has reversed without any Fed action at all (“chickening out” and once more endorsing the prior negative view that all is not well – Bernanke’s second option). 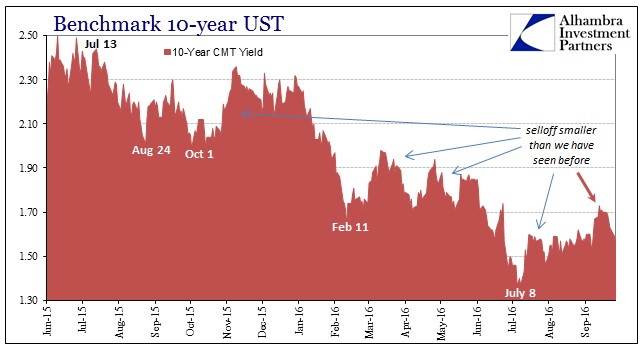 It isn’t quite the interest rate fallacy but it is perhaps as close as an academic economist may ever come to describing it. People focus entirely too much on yield curve inversion in this context as the only definitive signal, but by Bernanke’s own formulaic approach we again see that what is important is the potential difference between expected short-term rates and how that reflects upon current levels of long-term interest – and really how changes in each reflect upon one another. From that harmonized view, where long-term nominal rates have fallen but so have expectations for short rates, it adds up even in the orthodox terms to a very negative outlook entirely devoid of “stimulus.”

There is no bond market riddle. As each curve gets squashed by righteous pessimism, they together indicate nothing good about the near-term future, even more so than what their past corroboration has already been proved as valid. Each constituent part of the financial picture increasingly confirms there is no money in monetary policy. We truly don’t need the UST curve to invert, especially since the highly negative real money scenario at this moment no longer involves recession and the regular business cycle and has more than enough corroboration about economic and financial risk.