With 2a7 money market reform only a few weeks from its full implementation, there should be by now visible shifts in all the places where such reform will directly impact. Prominent among these money spaces is commercial paper, where the ranks of prime MMF’s that once lent in this market have been reduced in the shift toward government funds. As far back as April, there were suggestions that commercial paper volumes would be impacted. The Financial Times reported then:

It could begin to impact the market for commercial paper that many banks use to raise short-term funding.

“Now that we are six months away the market for commercial paper is thinning out,” Mr Crane says. “Everyone is bracing for outflows and preparing to have huge liquidity war chests ahead of the October deadline.”

With 2a7 coming up as everyone’s (intentional hyperbole) favorite excuse for anything remotely negative, especially LIBOR, we should have expected to find not just some reduction in CP volume but a clear cut shrinking perhaps on par with the hundreds of billions in MMF’s that have already made the change. But it just isn’t there: 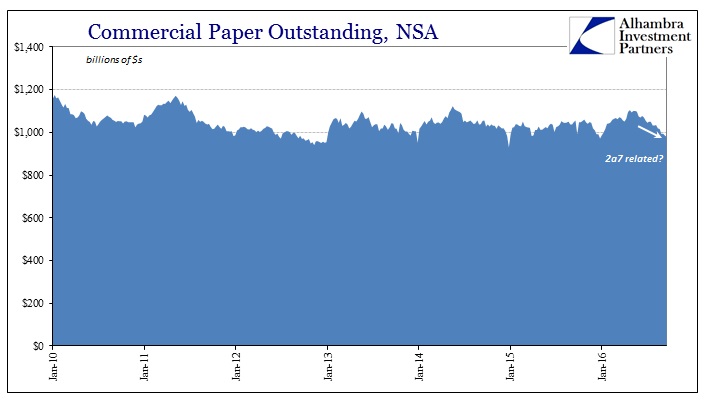 It is possible that the reduction in volume since the week of May 11 is related to 2a7, but when you zoom in on the past few years it isn’t at all obvious that the decline through summer 2016 is anything different than the usual behavior in the second half of almost every prior year. 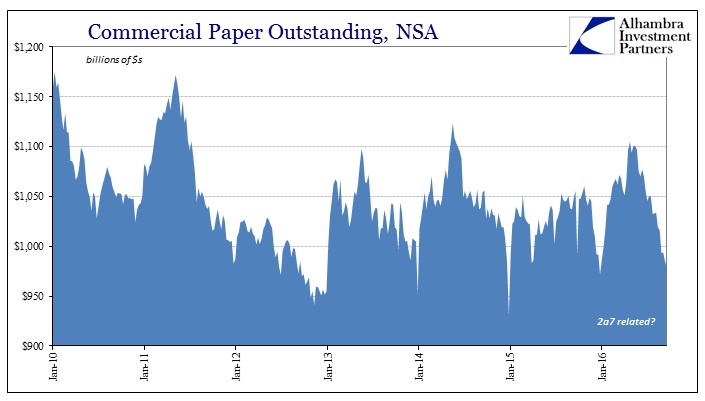 Again, if it is 2a7 then it is far from obvious, suggesting already that reform spillover is at most muted. Breaking CP into its constituents, it is even more the case for non-financial CP, the part of the market where real economic firms obtain funding for real economic processes. 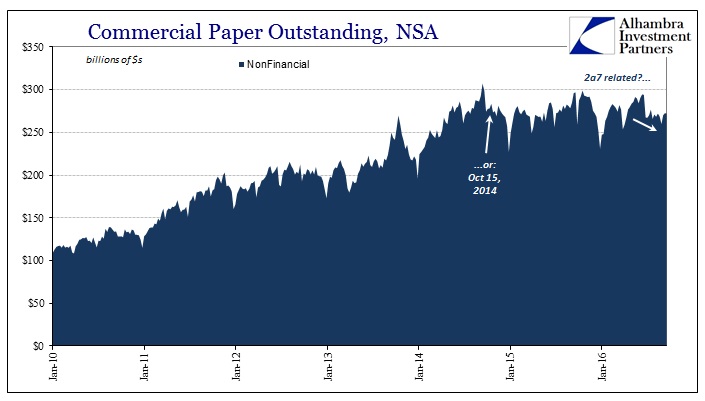 This doesn’t mean that we don’t find any meaning in commercial paper; far from it. As the chart above immediately suggests, this market might itself have been affected by all the usual negative arrangements; those that the appeal to 2a7 is trying to obscure or outright deny. If QE is “money printing” as so many still believe, then global, systemic illiquidity just isn’t possible no matter how obvious it becomes.

If we analyze commercial paper rates as well as volume, we find historically a very close relationship between the financial and nonfinancial sectors harmonized for other risk characteristics. For example, the Federal Reserve provides a nearly two decade history of CP rates both financial and non-financial paid by AA-rated issuers at a 90-day term of maturity. There is almost always nothing more than a trivial difference between the rates, just as you would expect with risk parity. 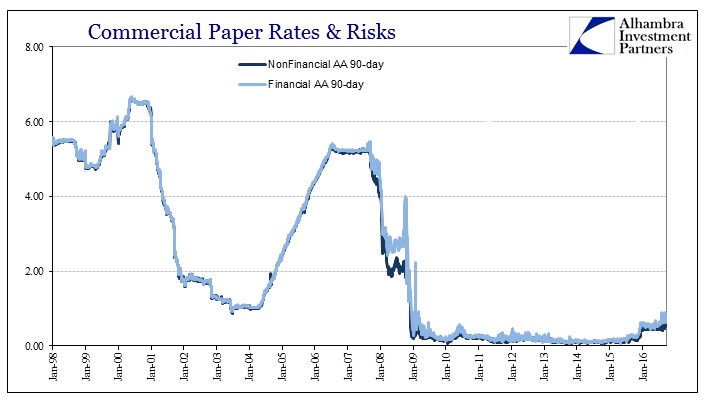 Where the rates differ is where the distinction between financial and nonfinancial has obtained the most attention – these periods are also just where you would expect, with one exception. 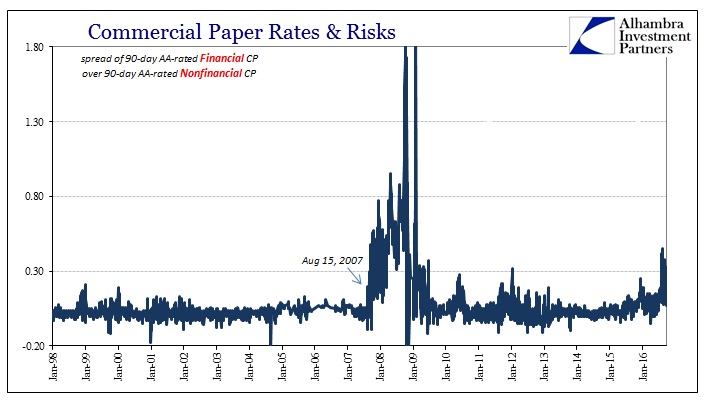 Where financial commercial paper registers a significantly higher spread to nonfinancial of otherwise the same terms is clearly the 2007-09 crisis starting in mid-August 2007, repeated in miniature (despite the “money printing”) in the years following the panic on smaller scales. 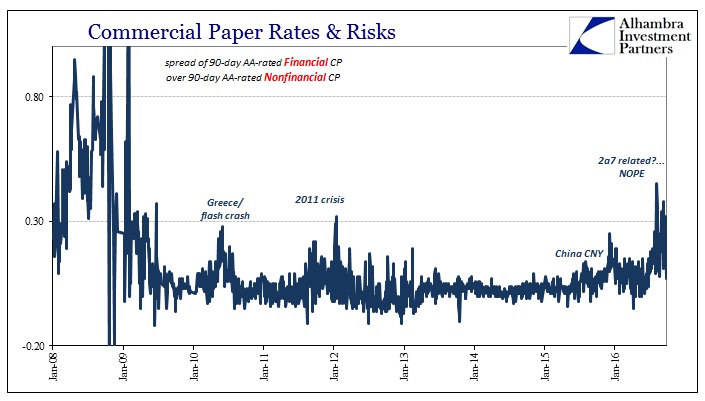 What is prominent and completely unexpected (by those who believe in QE and the recovery) is what we find at the far right – the current period. Dating back to the summer of last year, commercial paper investors, mostly the money market funds themselves, have been more discriminating not against CP overall but increasingly to what is issued by the financial sector. This cannot be due to 2a7 reform, and is yet further confirmation that “something” is going on with regard to interbank or money market perceptions of financial risks. 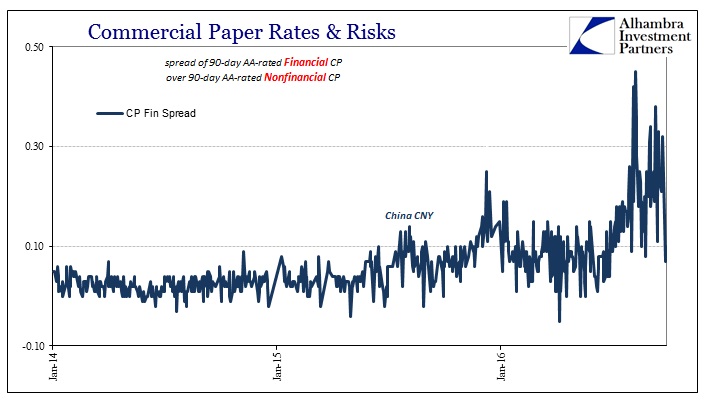 While some may still insist this is a matter of perhaps unintended consequences of 2a7, it is absolutely clear the pattern of risk being defined for the financial sector predates any reform considerations as they again trace back to at least last summer. Because of that, the pattern of rising risk aversion you see on the chart immediately above should be quite familiar. Though it is far from an exact duplication, the resemblance should end the ill-considered fascination with money market regulations. 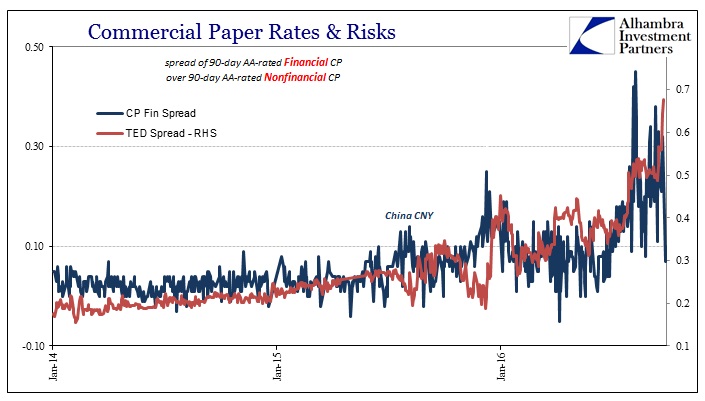 If this was related to overall 2a7, then CP rates for both financial and non-financial would be rising together, preserving the trivial spread between the rates. But because there is “something” going on with the “dollar” these past few years (“rising dollar” as euphemism for growing “dollar” shortage) financial CP has risen significantly more indicating pure financial not regulatory-driven risk. And just to add some unfortunately needed and appropriate overkill, there really should be no doubt as to the nature of what is going on in global “dollar” markets. 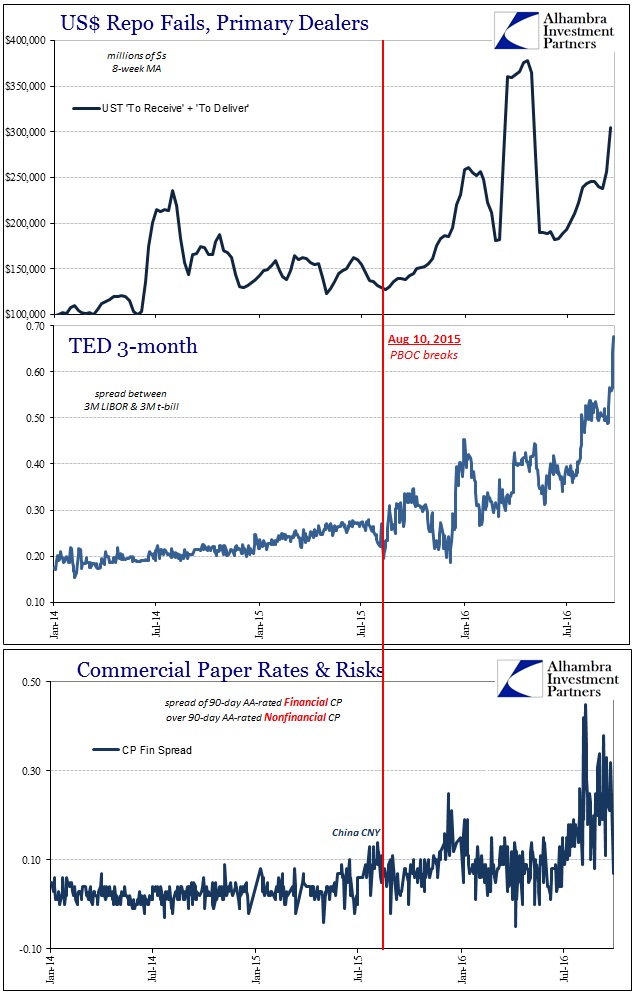 The mainstream is running out of excuses as to why global illiquidity cannot possibly be real and malignant in nature, but more importantly intractable. The commercial paper market is actually quite interesting just not at all in the way it is “supposed” to be. “Thinning volumes” should translate into more even effects but instead we find growing risk aversion targeting especially the financial sector. In years past that would have been interpreted as credit risk perceptions, but as I wrote intentionally on August 9 interpretations should be calibrated now by the reality of the “dollar” particularly during these last nine plus years:

Conventionally, the TED spread is believed an indication of interbank credit risk or even counterparty risk. What the events after August 9, 2007, showed, especially for those like Countrywide and Northern Rock, was that those risks also contain the element of liquidity risk. Thus, TED was not just indicating the growing interbank revulsion on the basis of solvency but rather the more immediate concern of liquidity. Both Bear Stearns and Lehman might have been insolvent, but they were never going to get that far and by the end it really didn’t matter. As Gordon Gekko tells Bud Fox near the end of the movie Wall Street, in the end it’s all about bucks.

The rising TED spread in 2015 and 2016, as 2007 and 2008, is all about bucks and who doesn’t have them. What we find here nine years later indicates the sudden return to general realization of the true native state of the eurodollar – nobody does.

It matters for the real economy in its slow, maddening suffocation but more so for the financial sector where these kinds of liquidity risks can appear not to matter until they are all that matters. Repo, LIBOR, and commercial paper; they are all a reflection of a world that more and more appreciates how QE was never money printing and the consequences of what that means in all facets, financial as well as economic. It isn’t a pretty picture, and it was never painted by the SEC seeking to fight the last crisis.