From the orthodox binary view, PMI’s aren’t making any sense. Convention currently dictates that the economy must be growing, and where not moving unambiguously toward recession. Translating those expectations into these sentiment surveys means that under expectations for the former PMI’s should be not just above 50 but increasingly so, while the recessionary condition should measure nothing above 50 and only getting less. Instead, throughout the global surveys there is instead this tendency to swing from one way to the other.

What is lost in the volatility is what these PMI’s are actually indicating; not some element of pseudo-precision where 50 is actually a dividing line between growth and contraction, rather that the volatility itself is what is important in defining a global economy that is neither growing nor in recession.

In the US, the ISM Manufacturing PMI fell to just 49.4 in August, a shocking reversal because the rise in the index during spring was thought to be as convention assigns – a near-miss to recession to start the year that had given way to recovery and growth again. Thus, another reading below 50 in the summer shatters that illusion. The latest update for September is back above 50 again at 51.5, but that is just this unevenness that permeates the economy’s third option. In other words, bumpiness is weakness or sluggishness or however it is to be categorized in the most benign terms.

The argument over whether 51.5 or 49.4 is the more indicative reading misses the point; they both are because we are no longer “arguing” between months of 55 or 57 as was the case in late 2014. The economy has clearly slowed and has taken an unusual amount of time to do it; and being stuck around 50 and outside the acceleration of spring really suggests that despite two years of it this “sluggishness” isn’t about to end anytime soon. 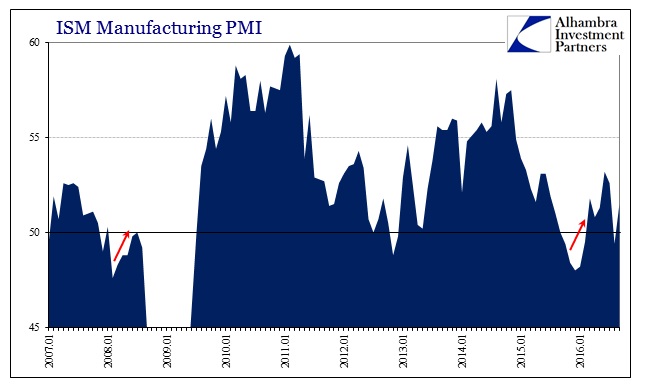 The Markit US Manufacturing PMI never fell below 50 during these past years but nonetheless shows the same economic conditions. After declining near 50 to start this year, like the ISM the Markit PMI appeared to indicate a close call, shooting up in July to 52.9 and supposedly enjoying the steepest rise since late last year (a comparison that should only have tendered caution). Now the index is back down again to 51.5 and “somehow” continuing to denote nothing but sluggishness.

U.S. manufacturers signalled [SIC] another moderate upturn in both production volumes and incoming new work during September, but the latest survey indicated a further loss of growth momentum from July’s recent peak. Softer overall growth was attributed to generally subdued client demand, alongside a drop in new export sales for the first time in four months.

Again, this isn’t supposed to happen under the binary framework. The economy is not supposed to slow to near-recession, bounce, and then slow again. But that has been the constant state of this slowdown, manufacturing recession, or whatever term might actually be appropriate. Nowhere has that been more evident than in China whose PMI’s have been stop-go-stop for years now – related very much to erratically slowing economic conditions here.

China’s official manufacturing PMI had like the ISM fallen below 50 at the outset of 2016, a low of 49 in February, before moving back above and suggesting to some economists that “stimulus” was working. The index never truly accelerated, though, and by July was back below 50 again if only barely. Last month, August, the PMI lurched ahead to 50.4 and was calculated again at that number in September. While 50.4 may be the highest reading for the index since October 2014, it isn’t appreciably different than any of the readings in the two years since then. 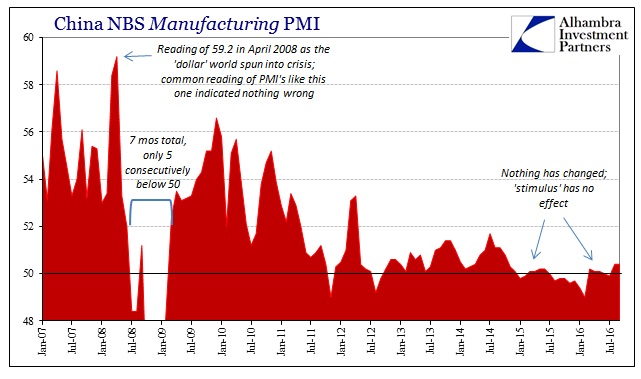 There is no acceleration indicated here, and there isn’t any recession in these numbers like 2008 and 2009, either. An economy that operates on such painfully low levels is bound to be just this irregular. Since further decelerating in the second half of 2014 (the “rising dollar”), after first decelerating in 2011 and 2012, the Chinese manufacturing economy appears nothing more than stuck; a disastrous outcome because unlike recession we cannot define ultimate negativity most especially in terms of time.

China’s non-manufacturing PMI perhaps demonstrates this unending “rut” in the clearest fashion. Since falling below 54 in October 2014, the service-sector reading has been some fraction of 53 in all but three months since. 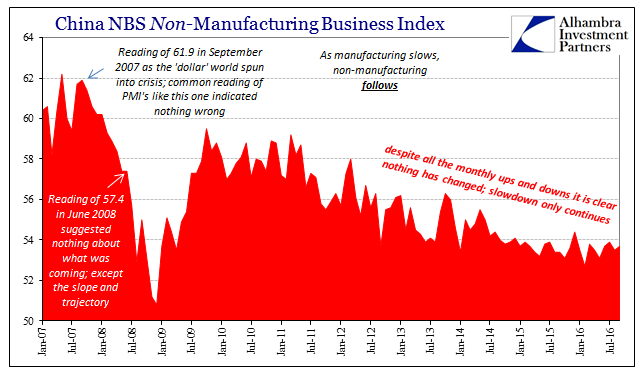 What is meaningful is not that it is consistently above 50, but that it is stuck close to it far more than 58 or even 60.

If there is a common qualification or description among all these PMI’s it wouldn’t be recession or growth, it would be “languishing.” The global economy already operating at a low level or seriously degraded capacity can accomplish no better than perhaps small fits of acceleration that are truly transitory. It is perhaps the epitome of one step forward, two steps back, where the biggest cost is lost time particularly where each seeming step forward is so celebrated and overstated. 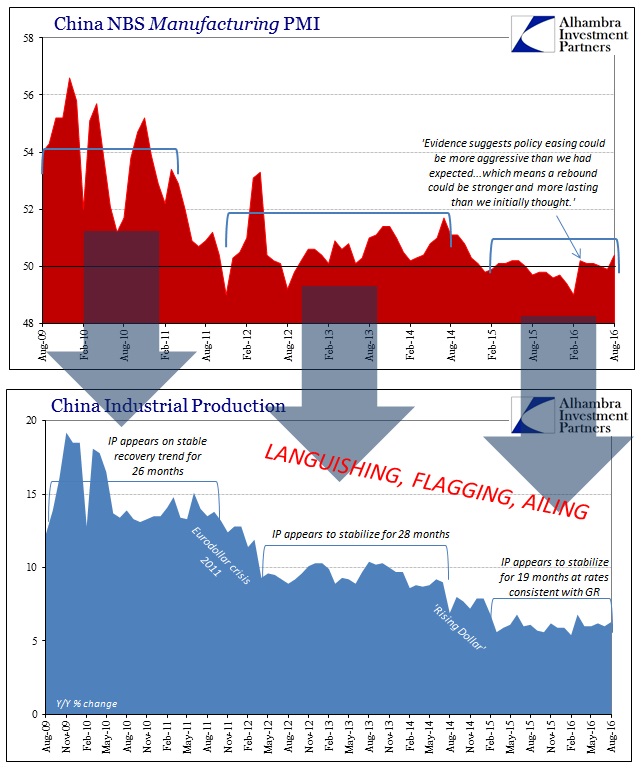