In February 2015, New York Times columnist Paul Krugman challenged his critics to come up with a Republican politician’s proposal that “would reduce after-tax-and-transfer inequality.” Importantly, Krugman added a qualification that, “Bank shots don’t count.” It was an interesting dare more so for what it said about economics in the mainstream, meaning that it raised the question about all economic theory as largely dependent on “bank shots” to begin with. To clarify, I have little interest in how any proposal might “reduce after-tax-and-transfer inequality”, only that I find the challenge to do so in a straight-forward (sounding) manner illuminating in an ironically indirect way.

Quantitative easing, for example, would not qualify under Krugman’s constraint. As then- Fed Chairman Ben Bernanke wrote in the Washington Post in November 2010 confidently championing QE2, its success would be just so indirect:

The first order effect would have been “eased financial conditions” which thereby created second (and third, etc.) order effects that “promote economic growth” – to many judging with nothing more than common sense this was undoubtedly not just a “bank shot” but an exceedingly difficult if not unrealistic one. To economists it was a layup, especially those of Bernanke’s persuasion (arrogance).

The sudden appearance of weakness in late 2014 and really at the start of 2015 could fairly be characterized as themselves the second order effects of the “rising dollar” in sharp contrast to the layup scenario. Instead, however, economists insisted that and the “manufacturing recession” was nothing, not even effects at all but just “transitory” weakness unrelated to the baseline growth promoted still by “easier financial conditions.” This was, of course, an unscientific view since it presumed first “easier financial conditions” which the “rising dollar” itself disputed.

From the latter view, the “manufacturing recession” was not unrelated “transitory” weakness but rather second order effects of a far different monetary condition where QE’s byproducts (bank reserves) are properly viewed as wishful thinking instead of functional money. Those second order effects continued not just through last year but into this year, adding more evidence to the soundness of that proper monetary judgment.

Increasingly we are now finding third order effects in the direction of “tighter” financial (monetary) conditions. Among these are labor market indications that are almost uniformly describing deceleration; to what degree and from what starting point is debatable, but it is increasingly likely that there is significant slowing in what would be a third order effect of broadening “tightness.” Big ticket consumer spending items would also be included in this classification, especially autos and now housing.

Relatedly, there is a clear effect of slowing and/or “tightening” in construction spending – all conspicuously and importantly dating back to last summer. The first appearance was in public construction, peaking last June at $300 billion (SAAR). Since then, new announced public construction is down 10%, with August 2016 estimated to have been just $270.5 billion. 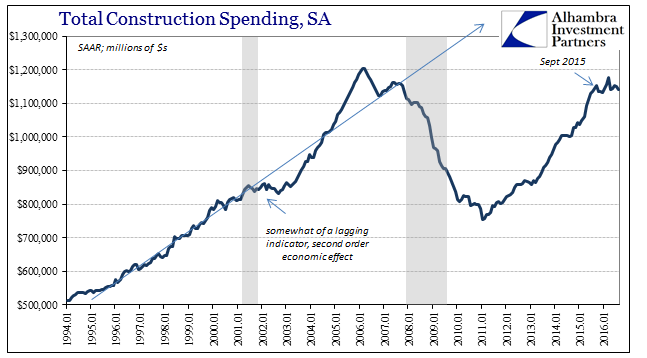 The slowdown in government construction might be significant on its own as especially local governments are constrained by both budgets (meaning taxes) as well as financial considerations (meaning “tightness” hitting bond flotations). But it isn’t just the public sector that has at least paused; private construction in especially the residential space has experienced sharp deceleration this year. Year-over-year residential construction (NSA) was up just 1.6% in August, the lowest growth since June 2011at the start of the real estate rebound. 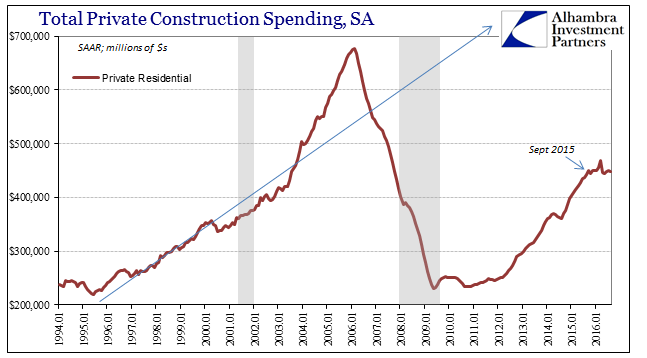 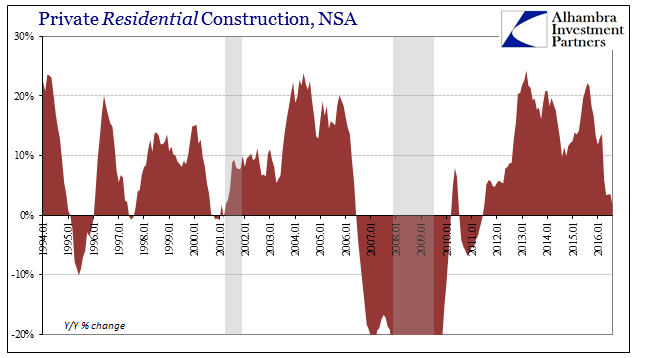 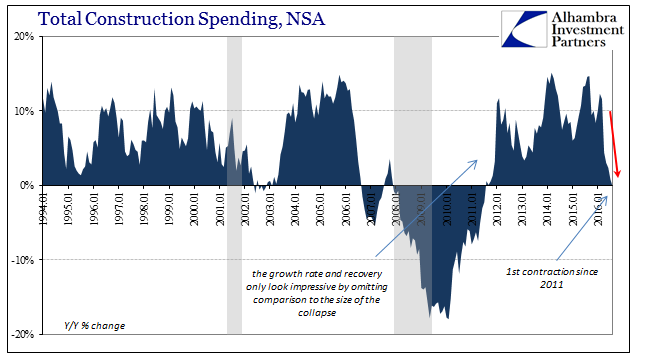 To get a sense of the possible degree of this current slowdown, during the dot-com recession total construction spending essentially stagnated for about a year and a half starting in the middle of 2001 after (lagging) the recession had already been officially declared. While the housing bubble was already ongoing at that time, it effectively canceled out what was a serious contraction in non-residential investment. Though overall spending peaked in March this year, construction in total has again been essentially flat for a little over a year now; suggesting like the dot-com era construction trajectory that at the very least a serious, negative economic climate has already developed.

Apart from the obvious second order effects of housing at the top of the housing bubble, construction spending by and large is a lagging or confirming cyclical indicator (third or fourth order). I don’t think the current economy qualifies under those terms, but overall analysis of the process still applies; meaning that the marked deceleration or even contraction in construction spending is further positive evidence that weakness is, first, quite real and, second, spreading or broadening. We aren’t (necessarily) looking for recession here, just evidence of what is really going on. From “rising dollar” to third order economic effects, it looks more and more like Bernanke’s “bank shot” is totally unraveling.