Four years ago, recession fatigue had set in as by then it was already several years into recovery even though it just didn’t seem that way. Historical experience had been uniform in business cycle symmetry; the economy comes back with same intensity and pace by which it had been knocked down. From that expectation alone the economy of 2012 should have been roaring in every way imaginable. That view was only amplified by so much “stimulus” including two QE’s, more than three years of ZIRP by then, and a completed ARRA.

Yet, there were only constant interruptions. Though they seemed to be more European or “overseas” in nature, there was the nagging feeling that “something” was off. Economists were quick to claim that anything holding back great relief was but temporary, a belief they thought would be greatly strengthened later in the year (2012) with a third (then a fourth) QE. Weakness, then, could not have been weakness, it was always something else.

From that point on the litany of excuses has been at times entertaining, while at other times downright absurd. In December 2012, for example, CNBC reported that though Christmas sales in 2011 were marginally healthy, in 2012 they weren’t even close. The reasons provided at the time may have seemed plausible if only because it was guided (biased) by orthodox economic “analysis”:

Shoppers were buffeted this year by a string of events that made them less likely to spend: Superstorm Sandy and other bad weather, the distraction of the presidential election and grief about the massacre of schoolchildren in Newtown, Connecticut.

This is recession fatigue in action, blaming otherwise social constructs for economic results because nobody (in the mainstream) was willing to suggest Ben Bernanke was wrong not just about “stimulus” but that the Great “Recession” might actually deserve the quotation marks. And so in the years since, it is always, always something else.

Most infamous was the Polar Vortex of winter 2014. In what I think is a clear example of a post hoc ergo propter hoc fallacy (Latin for “after this, therefore resulting from it”; meaning confusing correlation for cause), the media and even economists were quick to jump on unusually cold weather to blame for what was very obvious and alarmingly widespread economic feebleness. It had to be the sharply freezing Canadian air invading the Continental US because to acknowledge even the possibility that the events of 2013 (including the MBS meltdown) completely contradicted the purported successes of QE at that moment requiring tapering. Better, it seemed, to spew cold air then to contradict the “maestro’s” heir.

Later in that year, of course, while every economist and policymaker was setting everyone up for the great letdown in 2015 by strongly overemphasizing dubious statistical acceleration while intentionally downplaying the clear unevenness exhibited almost everywhere else, recession fatigue struck yet again.

In earnings calls this week, J.C. Penney Co., Macy’s Inc. and Kohl’s Corp. all blamed warmer temperatures in October for disappointing sales. The average temperature across the U.S. was 56.2 degrees Fahrenheit last month (13 degrees Celsius), up from 53.5 in 2013, according to data compiled by Bloomberg Intelligence.

There is such little self-awareness in these situations under normal circumstances, but in November 2014 to blame warm weather (of 2.7 degrees F) after the uniform tide of “unusually cold winter” unveiled by mostly the same retailers just months before bordered on absurd. This is not to say that there haven’t been some truly outside-the-box excuses. My personal favorite was Douglas Ewert the CEO of Men’s Wearhouse who in his company’s September 2013 conference call actually blamed in part triskaidekaphobia. I’m not kidding:

We are aware of widespread negative results impacting the wedding industry this year. We believe this is mostly a timing shift. Historically, we’ve seen numeric anomalies in the calendar effect when brides choose their wedding date, and we believe that the number 13 in 2013 is causing a small but meaningful number of brides to avoid getting married this year. It’s reassuring to see a significant increase in advanced reservation for 2014 weddings though.

Apparently it wasn’t superstitious brides who were temporarily slicing revenue off the margins of growth for the retailer, as in 2014 the company bought rival Jos. A Bank to try to stave off further decline (and takeover) and has been in trouble ever since. Earlier this year, the combined company Tailored Brands announced plans to close 250 stores, including as many as 90 of the acquired Jos. A Bank outlets.

It never ends because the “recession” never ended. Consumers quite literally never recovered, and the belief, once pervasive in the mainstream, that they did was predicated on but one narrow construct – the unemployment rate. It has been the single most important factor in misleading mainstream analysis, to give comfort to all these excuses as if they were valid because a sharply falling unemployment rate had always meant rising economic fortunes in the past. It seemed to validate the QE view that demanded any coincidental weakness give way over time to the power and genius of scientifically determined, expertly applied “money printing.”

The problem with statistics is something of an original mathematical sin; they all assume, indeed they cannot assume otherwise, that the present and immediate future will at least resemble the past.

Four years after the first bout of recession fatigue , however, there may be rising a new phenomenon to replace it; recession fatigue fatigue. It may just be coincidence that there seems to be more skepticism now after the August Jackson Hole gathering of central bankers that could have been easily titled as “what now?”, but for whatever reason there is almost resistance to the constant need to blame anything but economic factors for continuing struggles year after year after year. Last Friday, Bloomberg brought recession fatigue full circle, back to another election that we are supposed to believe has once more intruded upon the attention span of US consumers. This time, however, they aren’t buying it.

It’s usually the weather. Now there’s a new excuse that U.S. retailers and restaurants are floating to explain their lackluster results.

To hear retail executives tell it, the battle for the presidency between Republican Donald Trump and Democrat Hillary Clinton is causing Americans to put off buying everything from romance novels at Barnes & Noble and jeans from the Gap to burritos at Yum! Brand Inc.’s Taco Bell. They might even be delaying wedding engagements, not good news for companies like Signet Jewelers Ltd.

Where prospective brides were afraid of the year “13” it makes perfect sense that they would avoid marrying under the auspices of Trump vs. Clinton. Such absurdity, however, that in the real world was once mildly amusing is now just pathetic; even some of the media sees that much. Maybe the election has had an effect at least given that it is a widely accepted marker of the passage of significant time. In other words, if retailers were making somewhat ridiculous excuses at the last one and are still making many of the same now at the next one, then it really is time enough to re-evaluate what “we” thought this economy was and therefore what it will never be. 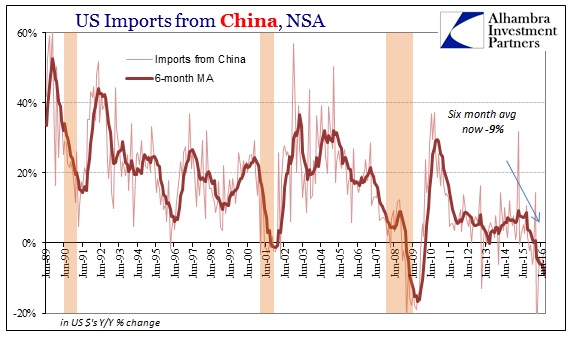 Before the Great “Recession”, Americans were thought quite universally as almost disgustingly gluttonous especially for what retailers had (and still have) to offer. There wasn’t any small trinket or especially electronic gadget imported from China that we wouldn’t buy. In 2016, imports from China have consistently contracted and retailers have to recycle excuses as to why what has been a clear shift in behavior is nothing to be concerned about. “Something” happened starting in later 2007, cemented by another “something” around the second half of 2011.

It’s as if the economy got knocked down, hard, started to get up only get knocked down again. The second blow may have been the knock out and if it wasn’t for the myth of QE and “stimulus” coupled with an unemployment rate not designed for these circumstances maybe “we” would have seen it sooner. Then “we” might not have wasted so much time on central bankers and their dreams of technocracy. Maybe it’s not now recession fatigue fatigue but rather technocratic fatigue. 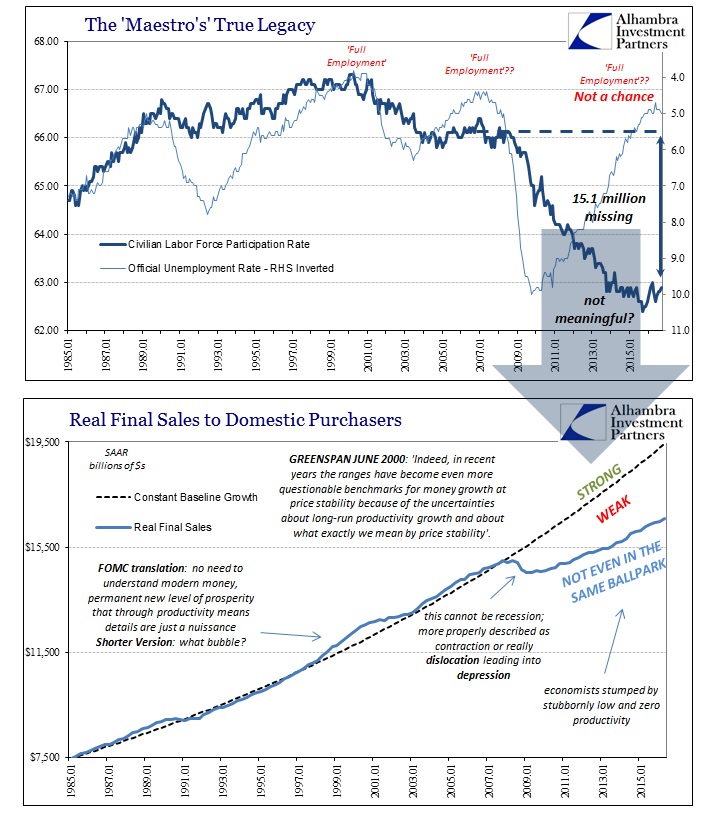