Woe to the unemployment rate. Without it so much confusion and angst might have been avoided, though admittedly that more realistic view would have been itself darker but at least clear. In August 2014, Federal Reserve Vice Chairman Stanley Fischer unleashed a brief but powerful storm of realism upon the bubble of monetary policy. Perhaps it was because his target was not specifically his own central bank but rather central banking in general he felt resolute enough to speak such truth. Not that it was all that brave to actually say out loud what by then everyone not named Ben Bernanke already knew too well.

From that point forward, however, Fischer seems to have been pulled into the orbit of the BLS by the intense gravitation of the “best jobs market in decades.” The contradiction is quite telling in that regard; though the Fed still has to explain every year the same grand disappointment, only grander this year, to hear it in terms of policymaking that’s not the case at all. Fischer’s two favorite words over the past year and a half have been “very” and “close.”

In March 2015, as oil prices climbed higher after the “unexpected” crash at the end of the prior year, Dr. Fischer voiced more than a little tangible satisfaction that the US economy was very close despite all that, suggesting that the first rate hikes might even begin in June 2015 if not September at the latest.

In an interview later with CNBC, Mr. Fischer said “there’s a pretty high probability that this is the year” the Fed will tighten. He said the Fed is “very close” to its goal for full employment, and that inflation should move higher as the impact of low oil prices dissipates.

The impact of low oil prices did not, of course, “dissipate” and though he and his colleagues have yet to explain why, they have been repeating all the same words as if suddenly attached to new meaning where there was clearly none before. In what has to be cosmic, perhaps karmic fate, on August 10, 2015, just as the Chinese “dollar” storm was about to be unleashed via CNY, he again reiterated his confidence.

“A large part of the current inflation is temporary,” Fischer said in an interview Monday with Tom Keene on Bloomberg Television. After the effects of cheaper oil and other raw materials dissipate, “these things will stabilize at some point, so we’re not going to be as low as we are forever.”

Central bankers are if nothing else pulled by ignorance toward issuing famous last words. It was Bill Dudley on August 7, 2007, who said, in effect, there was nothing big on the horizon. Almost a decade later Stanley Fischer talked about how “things will stabilize” just at the moment they really, really didn’t. It’s as if they have no idea what they are talking about, especially when it comes to money and monetary.

A little over a year later, in later August 2016, Fischer once again said, “we are very close to our targets.” To be fair, the FOMC did manage a single rate hike in December 2015, but it hasn’t been universally accepted even among economists and policymakers alike as warranted. Thus, the continuing, never-ending debate especially as it plays out under the orthodox conception of inflation. So why not one more time yet again today:

We are very close to our targets. So we’re not in deep trouble with monetary policy at the moment.

Other than the pre-programmed acceptance of the media, there is no evidence for this anywhere. Throughout these past two years, Fischer and those of the same perception have been using the unemployment rate as the definitive view on ending great and repeated disappointment. “Full employment” was supposed to mean that this ritual of apologizing year after year for the economy failing to live up to their promises was an artifact of past conditions. According to markets, however, the regrets and confessions will only continue and for more than just this year or next. 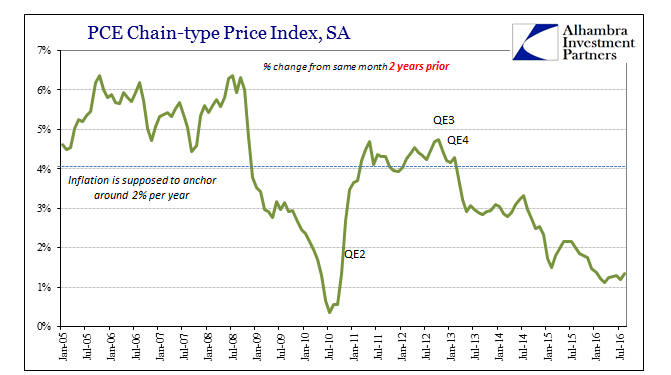 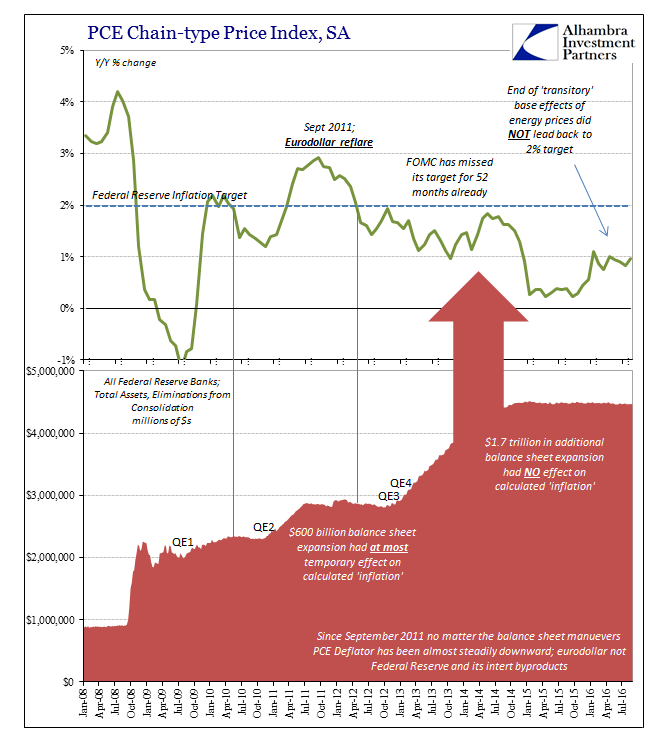 Inflation expectations and breakevens are better of late than they had been in the depths of summer. In early August, the 5-year inflation breakeven was as low as 125 bps but has rebounded to 155 bps today; the 10-year breakeven made much less of a move, which is typical, but still from about 144 bps in August to 168 bps today. More importantly, to the Fed anyway, 5-year/5-year forward inflation expectations rose from 159 bps to 181 bps.

While those moves might sound impressive, in context they aren’t. Markets continue to trade on severely reduced expectations. The 5-year/5-year rate remains in the same low range as has been in place all year; a range that is and continues to be significantly less than what existed last year when the inflation according to Stanley Fischer was “very close.” 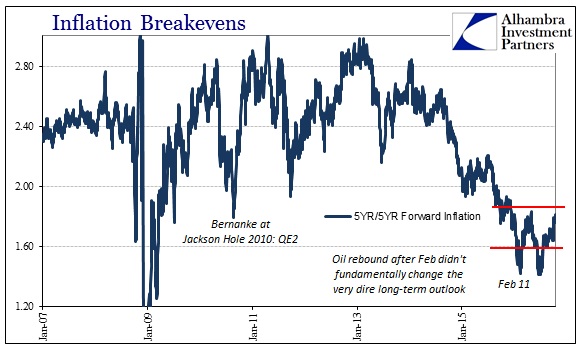 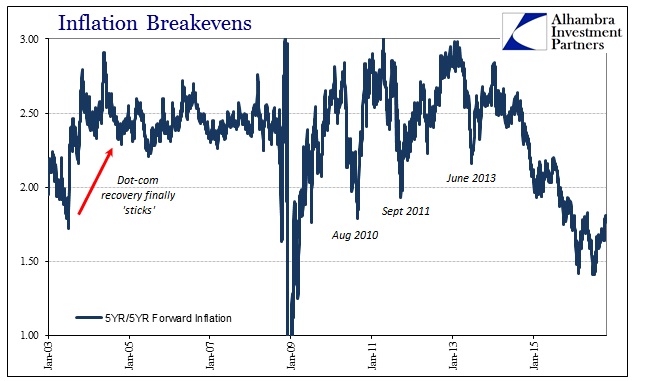 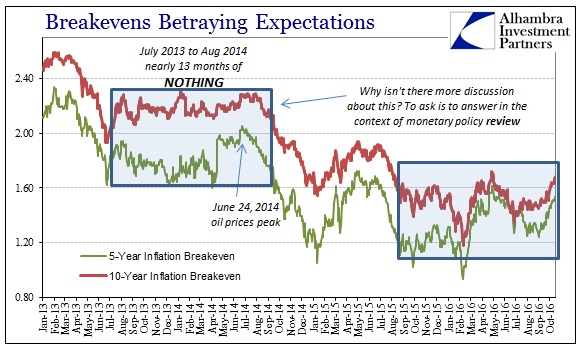 It appears very much as if the market “debate” about the future condition of the economy both short- and intermediate-term is not between “very close” and the usual disappointment but rather the degree to which awful and atrocious will continue; in August, it seemed more of the worst case (so far); now, only a little less so.

These negative views are further expressed by the obvious lack of agreement (with Fischer) in the overall UST market. The yield curve remains highly, highly subdued. Even though it, too, has been better (steeper) more recently, that truly isn’t saying much if anything. At this point, however, given this rhetoric of “very close” there really should be a huge and forceful confirmation in these markets. 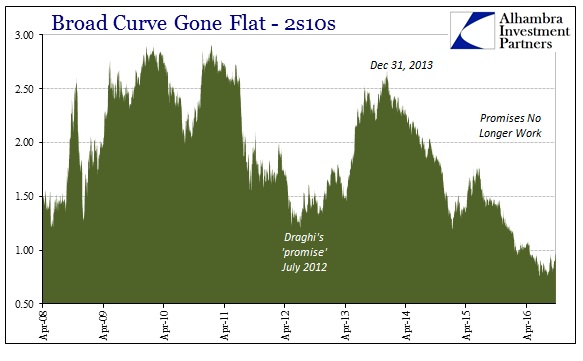 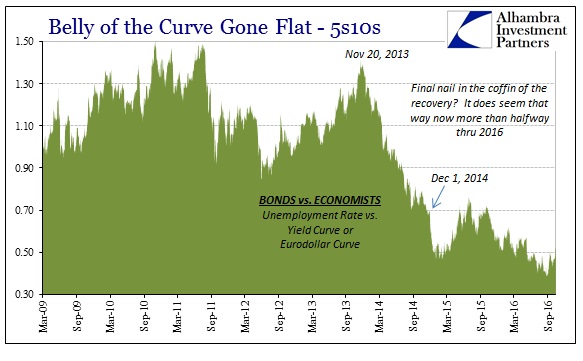 And, as noted last week, even consumer surveys show the opposite of what Fischer suggests, as if he merely says the words as but a meaningless collection of primitive sounds meant to fool modern ears into believing what is clearly not has to be. This is what policymakers have become, using words that clearly don’t apply so as to avoid explaining why other more appropriate words actually would in their place. Because they are never publicly challenged, they can mutter “very close” for at least eighteen months without, apparently, actually being aware of how unreasonable the devotion. 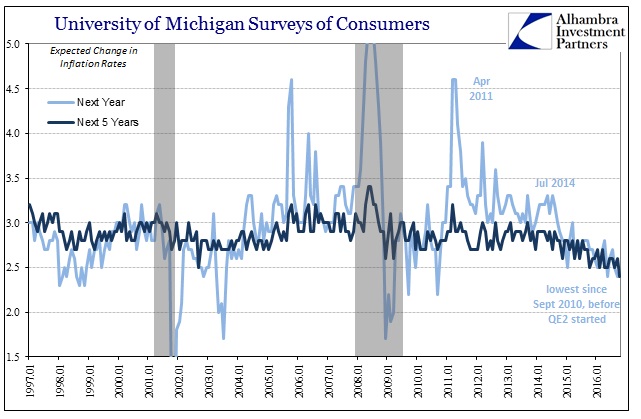 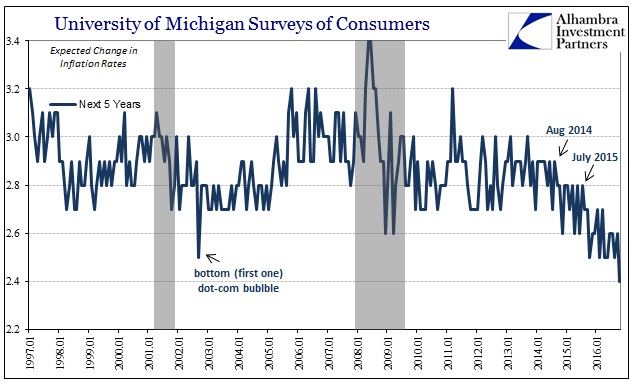 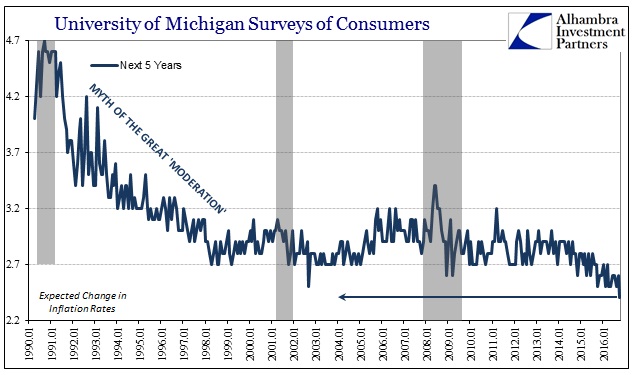 This is the actual power of the unemployment rate; not as indicative of the final appearance of full and blooming economic health, but as a fog of impairment almost like intoxication that turns once (somewhat) rational analysts to blind devotees of dogmatic repetition. Nobody but economists and the media seems to believe the US economy is “very close” to anything but joining the rest of the world in increasing social and political fraying. Instead, markets, who should really be positioning in the extreme for “very close”, appear content to re-evaluate whether this ongoing depression and lack of actual growth will mean just minor tattering or perhaps open chaos. Mere disappointment was priced and surveyed in 2014.