The 6-month average monthly change is +179k, and has been close to that for the past six months dating back to the shockingly weak report for May (without May, the average of the past five months is still only +210k). Between July 2014 and February 2015, the average was around +260k. The headline of the payroll report registers about one-third slower now than at the height of “full employment” euphoria. There is a very good chance that the US labor market has slowed considerably, leaving open debate exactly how much and from what condition to start with. 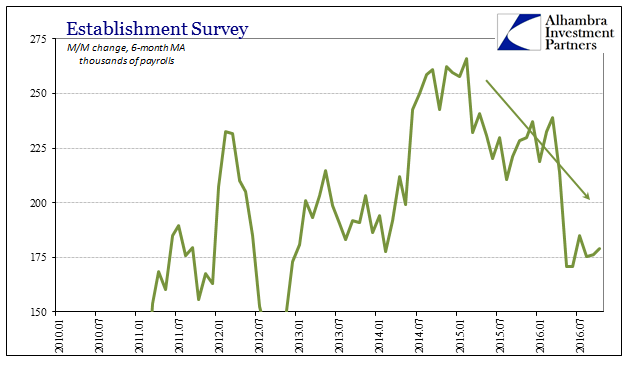 It used to be that the labor reports were the most watched because they seemed the most accurate. To many, that hasn’t changed but only because their perceptions haven’t caught up to what has already transpired. In other words, for two years now whenever any economist or Fed official was confronted with the prospects for an economy that was weakening rather than strengthening as was predicted, their response was uniformly, “but the unemployment rate.” The labor data, this “best jobs market in decades”, was supposed to signal the start of “liftoff”, but it didn’t; in fact, the labor stats got it all wrong.

That could have been either a problem with interpretation or with the statistics themselves. I have made plain over these past two years my view, mainly that the BLS overstated the relative overall improvement in 2014, translating that through trend-cycle subjectivity into a labor market that just didn’t exist. I have little doubt about this contention, especially given the state of productivity, defined by separate BEA statistics that essentially “check” the math of the BLS. It doesn’t add up and hasn’t especially in the last two years, suggesting, strongly, that the headline numbers were to some unknown degree overstated.

None of that, however, erases the trend that is quite apparent this year. The labor market slowed and to get some idea of just how far we turn to other statistics from within the CES, as well as other data outside of them related to consumers, their income, and what they are spending (or not). Coincident to the slowdown in the Establishment Survey this year has been a drop, not a huge one, but noticeable nonetheless, in average hours. The estimates for hours both per week and change year-over-year confirm, again, the slowing trend. It doesn’t suggest full-blown recession, but it does appear more serious than the near-recession/slowdown in 2012-13. 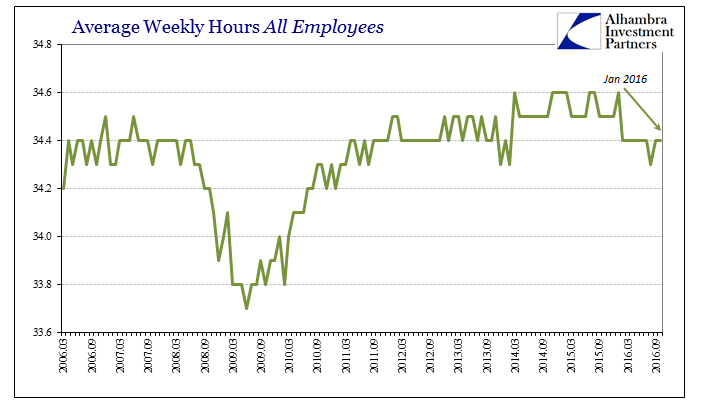 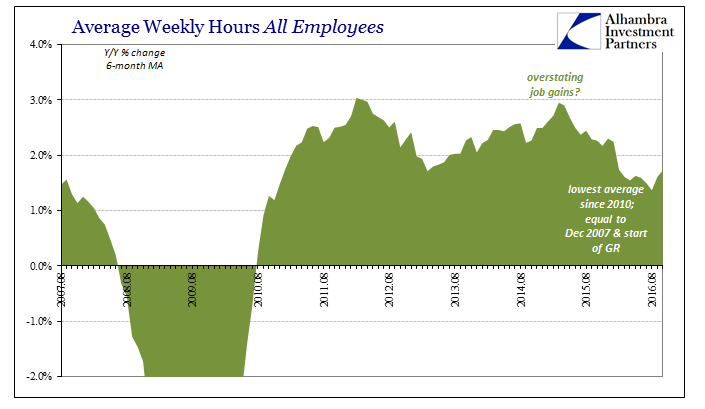 Despite the unemployment rate that has hovered near or just below 5% since last August, wage and income growth continue to stagnate at historically low rates. Weekly earnings (production & non-supervisory) actually contracted in August, but rebounded in both September and October. That was neither surprising nor actually different, volatility is typical. Average weekly earnings in the past during growth periods had averaged between 2.5% and 3.5%, and at “full employment” between 3.5% and 5.0% (more toward 5%). There is nothing even close to that over these past two years where the unemployment rate indicated to economists the same condition – the problem of interpretation. 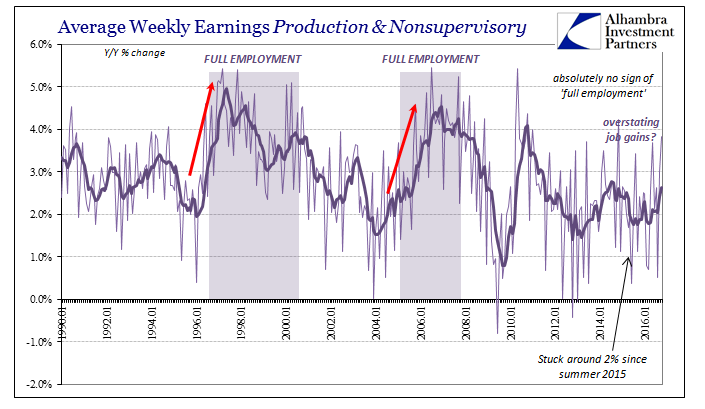 You can easily understand their mistake, though not condoning or forgiving it. In those previous business cycles where the unemployment rate had fallen similarly low, wages and earnings had surged, thus confirming the orthodox concept of “slack.” As it disappears in the normal course of a healthy economy actually growing, employers must bid up for employees as there are fewer sitting home; basic economics (small “e”). There is absolutely none of that now, not even the slightest hint. The reason is that the unemployment rate in this economic condition applies only to a much narrower proportion. The participation problem is real, and it is one that policymakers should not have so easily dismissed based on dubious statistics. 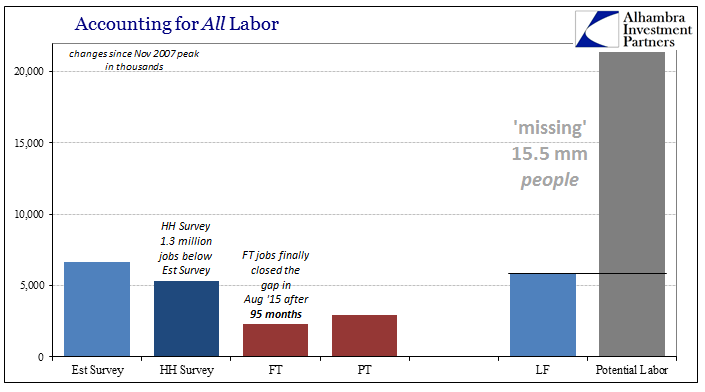 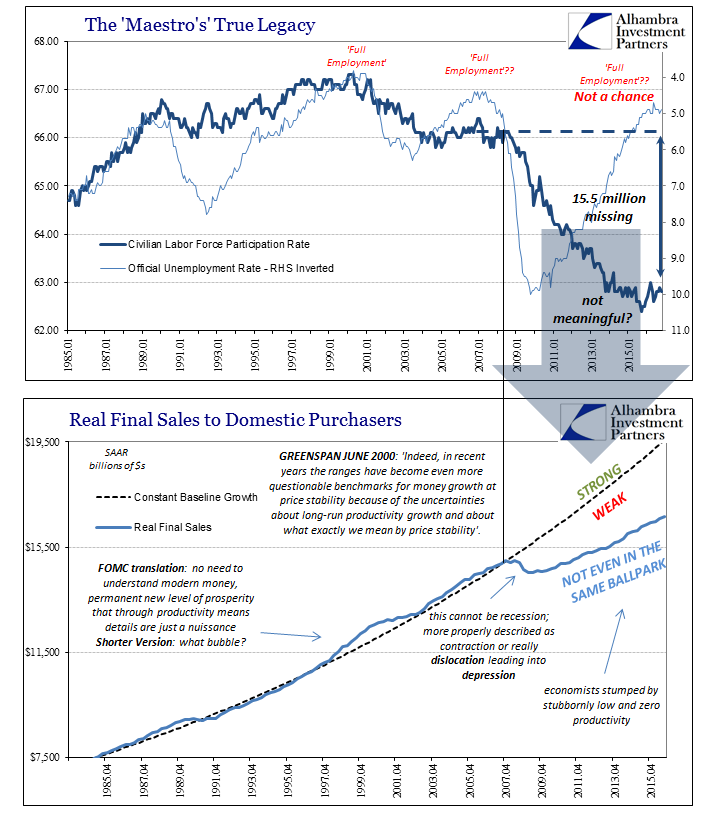 What we know with some solid assurance from this data is that the economy in 2016 is appreciably weaker than it was even in 2015, and that this has occurred in an overall economy that still hasn’t recovered from the Great “Recession.” As the IMF declared through its modeled revisions, from that we can claim that the recovery didn’t come and further expect that it never will. That’s what this unemployment rate, as well as the slowdown in the headline payroll figures, actually means. The economy of 2014 was not the signal for normalcy, it was instead as good as it was going to get, and that is really saying something with actual significance.