The rout in EM’s continued into this week, suggesting that the negative reactions last week may have been more than reflexive recoiling to whatever catalyst. The media is struggling to figure it out, and so has brought up the usual suspects even though there is great inconsistency in doing so.

Expectations of fiscal stimulus, infrastructure spending and reflationary policies under a Trump administration were fueling inflation fears, sending benchmark U.S. ten-year Treasury yields and the dollar surging. Expectations for tighter monetary policy and a December rate hike by the Federal Reserve were also playing a role.

It’s not just American commentary, as the CNBC description above seems to have been shared from the same single source written for Australian consumption as well:

Emerging market currencies have been among the worst performers since Wednesday’s election result, as investors fear President-elect Trump will ignite a trade war with key trading partners China and Mexico.

Surging US bond yields are also taking the shine off the relative yield of currencies through emerging Asia and Latin America.

Trump is supposedly anti-trade, which in the mainstream is good (if only it were actually free trade), but yet we are seeing “inflation” fears which would reflect a much better US economy that is somehow bad. But those aren’t even the most critical contradictions; higher US interest rates do seem to make sense in the context of EM currencies as a matter of less favorable differentials, yet EM currencies are acting in a way that we last saw when US interest rates were falling sharply. 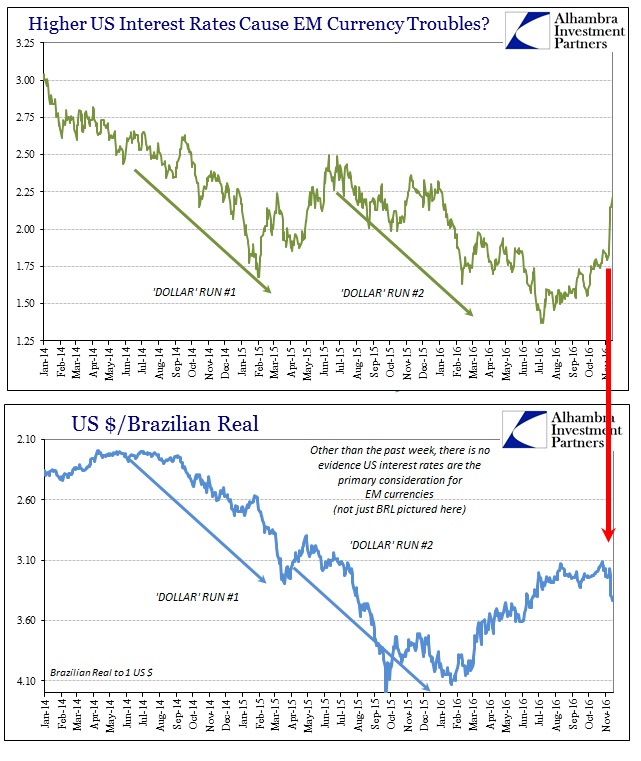 Whether it be rubles, real, or loonies, the “rising dollar” might be back. If there is a difference between its late 2016 version and the one that began the year in continuation of last year, it is that the global sovereign bond market appears to be its primary connective target. Liquidations are liquidations even in bonds. The disorder of the past week might have some Trump fears/excitement as its proximate cause, but the “dollar” is its foundation. We need only look to China for further confirmation.

A funding bank in eurodollars will certainly factor increasing risk and attach whatever CNY premium necessary in order to fill the needs of those Chinese banks, but at some point, assuming no overall increase in the market supply of eurodollar capacity, China’s “dollar” participants (borrowers) are going to start bidding past other banks in other countries who are of similarly troubled condition. At that point, it would look like, as it had in 2015, a bidding war for the limited supply of “dollars” from among primarily EM-domiciled banks.

In that situation, faced with “dollar” funding calls, you sell what is moving most against you even if that asset is widely treated as “risk free.” In reality, I believe they did so last year, too, meaning the difference in the bond market for Western govvies is how that selling was and is received. Last year, investors all over the world were wary of the world as it was being revealed as far less than desirable, placing a domestic bid under bonds even as EM banks on the losing end of the “dollar” short sold them (as well as their central banks). This year, sentiment has been quite different and there doesn’t appear to be so much enthusiastic pessimism to buy up everything EM’s are forced to disgorge and then some. 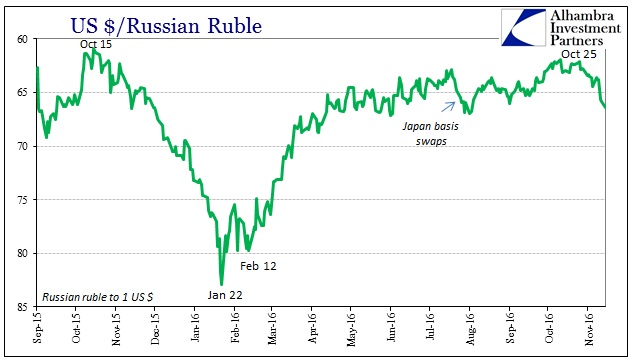 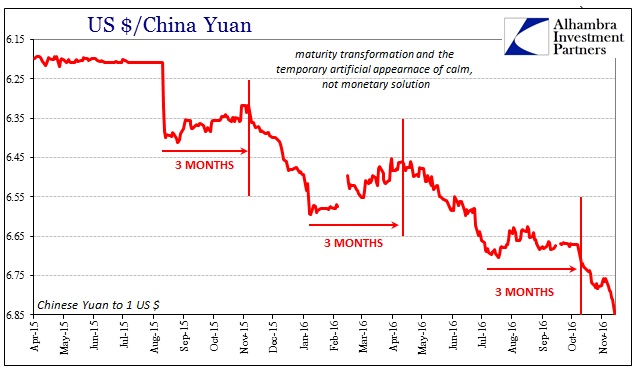 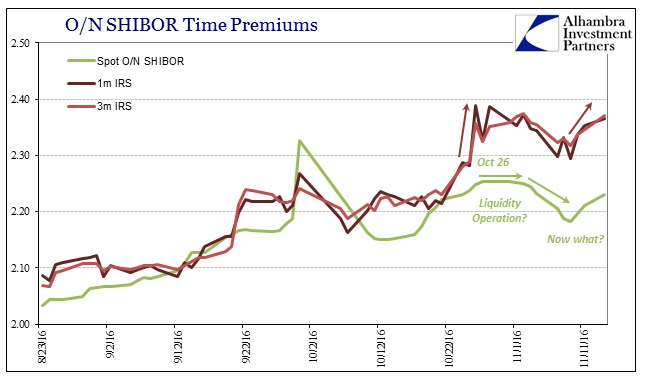 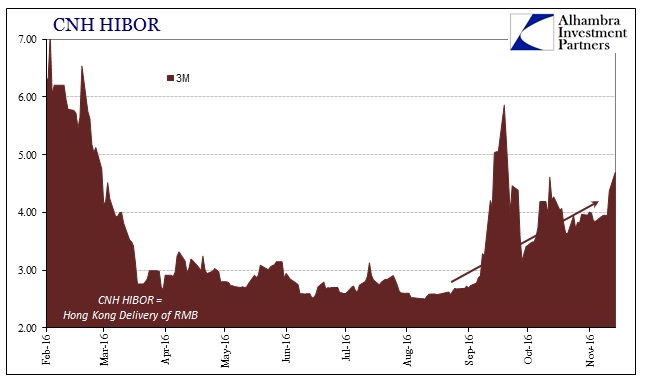 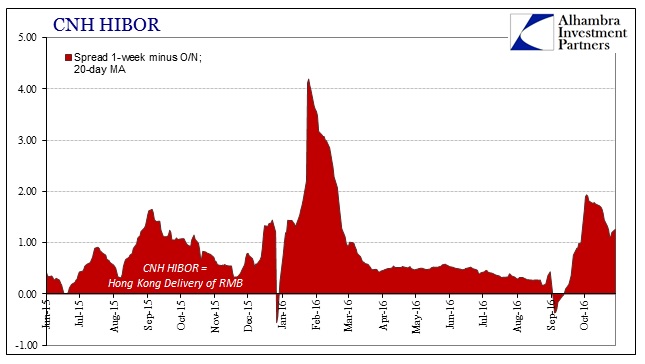 The constant through all of it in whatever direction is the “dollar.” This has been building for some months now, having resulted in too many familiar outcomes (subscription required):

What was truly notable about December 2015 in Chinese money markets was how much in disarray they were despite a great deal of PBOC effort to make sure that didn’t happen. The Chinese central bank had just cut its bank rates by 25 bps at the end of last October, and though SHIBOR steadied itself it only did so at -11bps from the before the policy change. Meanwhile, holding SHIBOR steady meant offshore illiquidity eruption as well as a big downward move in CNY. It spread all over the world from there.

The PBOC no longer holds SHIBOR steady, but the results are the same. China found itself with only growing unrest to the point of chaos in its RMB markets due to the “dollar” and that disorder spread out in waves to other places around the globe. The processes and symptoms are all the same; a consistency you just won’t find in mainstream commentary. Again, as noted earlier, the “rising dollar” is a euphemism for a more acute “dollar” shortage, one that ebbs and flows. This looks more and more like another global “flow” – “dollar”, not Trump.