With money market reform (2a7) more than a month in the rear view, LIBOR rates continue to rise regardless. Three-month LIBOR jumped to 91.622 bps Friday, up from 88.4 bps to begin the month of November. The 1-year maturity is now well over 160 bps, up more than 100 bps going back to November 2014. Since 2a7 is behind us, then the explanation must be the Federal Reserve surely going to “raise rates” in December because all that “global turmoil” is now in the past (the ECB declared as much just today).

That would seem to be the outward indication from the TED spread. Having jumped as high as almost 68 bps back on September 22, the spread between 3-month LIBOR and the 3-month UST bill is all the way back down to 47.6 bps; 36.1 bps just a few days ago. The combination, then, of higher LIBOR and lower TED does appear to corroborate the 2a7/Fed tightening claim. Together these indications might suggest lower liquidity risk at higher rates, which is the same as FOMC “normalization” with that “false” risk signal now being fully digested. Or do they? 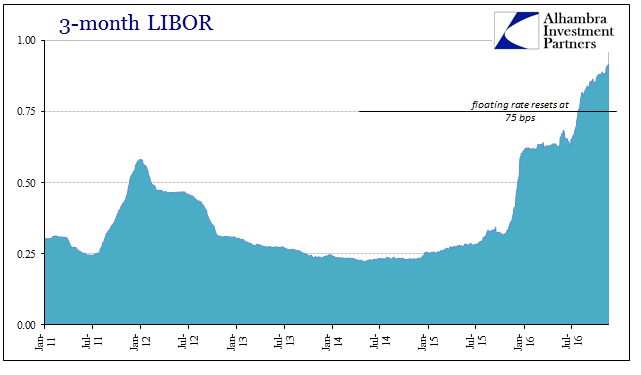 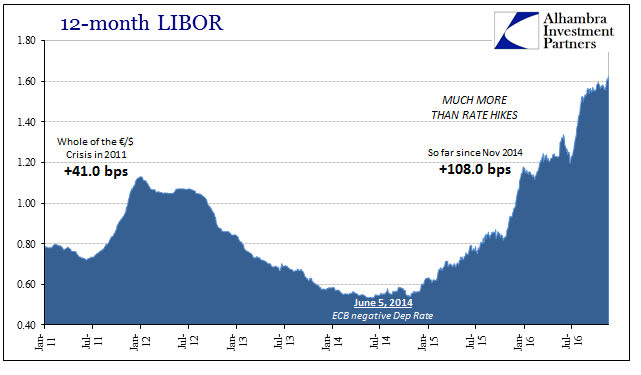 Perhaps the most conspicuous aspect of August 2015 was not that CNY suddenly lurched downward in an “unexpected” “devaluation”, it was rather that UST bill yields shot upward for no apparent reason. The 3-month rate had been just a few basis points in equivalent yield all the way until the end of July 2015. By July 30, however, the rate jumped to 8 bps, and then 12 bps on August 10. These moves don’t sound like much, but in the context of that environment they were hugely exposed. The fact that this surge in bill rates ended on August 10 cannot be understated since that was the day the PBOC was forced to let Chinese banks bid a huge premium for rollover “dollar” funding. 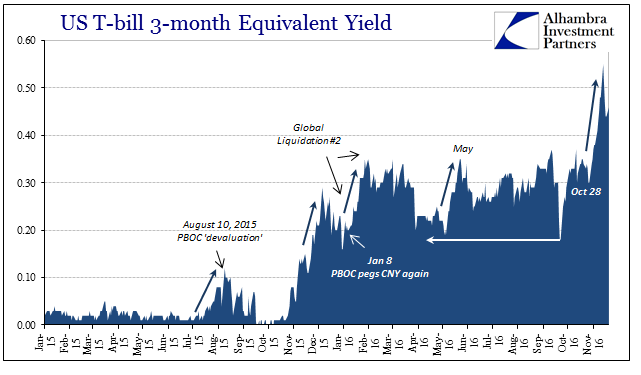 That was no isolated circumstance, however, as the matter has been pressed several times in the almost year and a half since. Whenever bill rates start spiking you can bet there is a great amount of serious trouble related to China, “dollars”, and global financial conditions. The result is a backward liquidity warning of sorts; with the 3-month bill rate as the “risk-free” comparison, the surge in yield subtracts from TED making the world seem like a much calmer place than it truly is at that moment.

It would be very hard to describe either August 2015 or January 2016 as less risky, but by the traditional view of TED that was to be the verdict for both. The spread had fallen from around 27 bps where it had been steady since May 2015 to just 19 bps on August 10. Rather than signal a great deal better about liquidity, that drop in TED, as CNY confirmed, was actually the opposite. In January 2016, the spread fell again, this time all the way back from above 45 bps where it ended last year to just 26.5 bps on January 28. It was during that descent that the worst occurred. 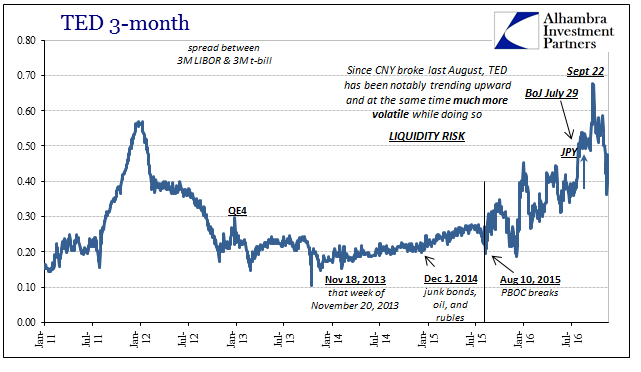 Behind it all was this Chinese connection to “dollars”, easily established just in the visualization of the TED spread. Since August 10, 2015, the paradigm has clearly changed; not only is it rising overall, the manner in which it has increased is far more volatile and uneven. The reason for that is this T-bill component, which tells us of Chinese pressure (meaning “dollar” pressure on China). The TED spread rises as a liquidity warning and then falls as liquidity actually and severely strains Chinese abilities, and then manifests in different ways throughout different parts of the “dollar” system transmitted by whatever it is the PBOC does as a coping mechanism.

It was September 19 and 20 when offshore RMB rates (CNH HIBOR) spiked to ridiculous proportions again, reminiscent of early January, and in the two days following T-bill rates collapsed into what looked like a buying panic. The 3-month bill yield fell from 30 bps on the 20th of September to just 18 bps by the 22nd. With 3-month LIBOR up slightly during those days, the math worked out to a TED spread exploding from above 56 bps to almost 68 bps – the completion of this summer’s building warning. Afterward, bill rates have moved up, jumping in the month of November (starting before the election and the fireworks after it).

That would suggest, in light of recent history, the usual first part through the middle of September and then more serious “dollar” problems thereafter especially into October. Sure enough: 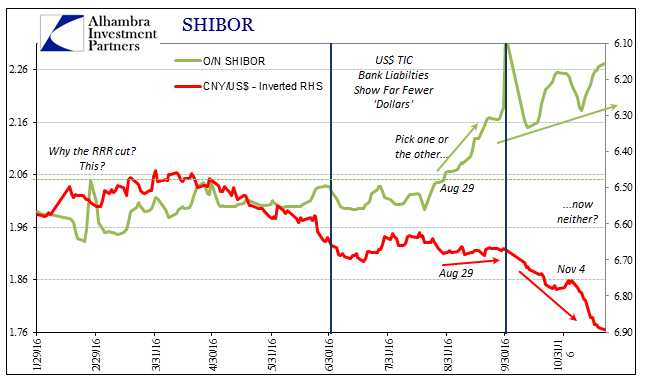 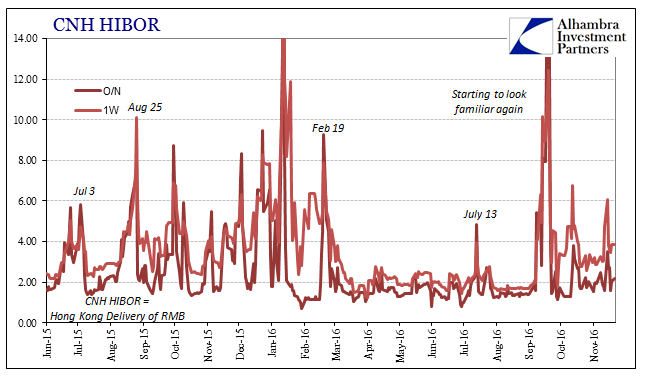 But though China has clearly been embroiled in “dollars” for the nth time, global stocks are up as are many other risk prices. Have there been any global disruptions other than those at the PBOC’s doorstep? 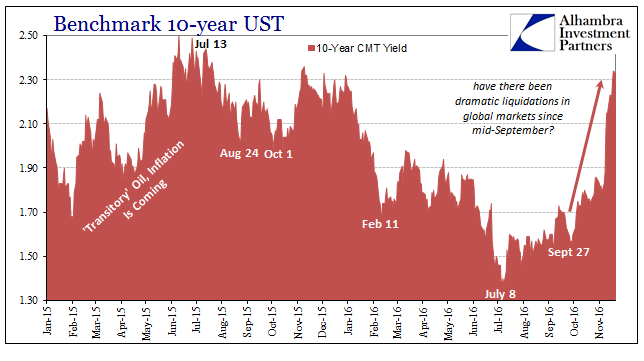 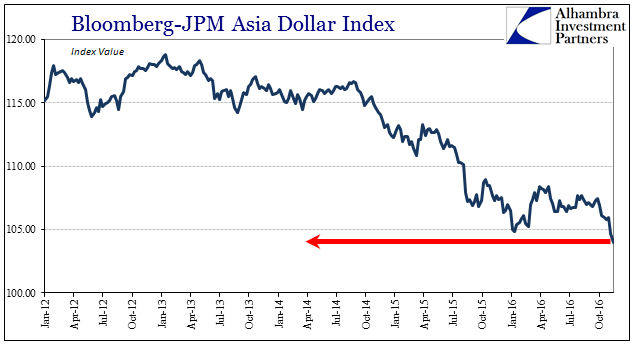 It doesn’t seem to be so much about the rates as it is about the global supply and distribution of “dollars.” From what I wrote on August 9:

That leaves us still vulnerable to a world that doesn’t fit with their descriptions. For years they have been saying there is nothing more to worry about, and for years we have been experiencing increasing tremors again – some of which are familiar to this past shock, and some that are new. Even in decay, the eurodollar does not stand still, constantly evolving…

If money market reform is totally responsible for the rise in money market rates including LIBOR since June, it is only because there are clear systemic, liquidity issues that remain even nine years after they first appeared. At best, this indicates that 2a7 “reform” is a change which the sapped eurodollar system cannot seem to manage, thus indicating gross systemic deficiency. And if this is almost totally unrelated to 2a7, it still amounts to the same thing; systemic deficiency which cannot handle the dramatic events of the past more than two years…It is the fitting paradox to modern central banking; a world since flooded with bank reserves is still desperately short of money and getting more so.