This Is Economics (Capital ‘E’)

This Is Economics (Capital ‘E’)

I think it necessary to qualify and clarify the conventional stance on the unemployment rate. In the mainstream, as noted yesterday, it has been something of an absolute. The lower it goes the more provocative the rhetoric on the positive side. After all, an economy at full employment cannot possibly be unhealthy, can it? That has been the great dividing point for a lot that has happened over the past two years, starting in 2014 where the dramatic fall in the unemployment rate coupled with a boost (that would prove temporary) in GDP led a great many otherwise smart people to conclude that, no, an economy approaching the theoretical full employment point even with all its problems will overcome any setback.

That was what was so interesting and frustrating about 2014 – it was a junction where a great many of the old problems that had remained despite the highly positive numbers in certain economic statistics were starting to meet new ones. This is not in one sense atypical, as any economy at any given time will be presented a great many challenges. We usually don’t notice them because in more “normal” periods one part’s big challenge is another’s great opportunity. The question to answer for the current economy is why were there, are there, so many constant challenges and so great an unwillingness to turn them into opportunities.

Theoretical economics has developed as a way to overcome just this kind of situation. Aggregate demand theory itself is the Keynesian answer to this imbalance; if the private economy is unmotivated to fill in these gaps then the government will do so in order to both push “demand” upward as well as inject necessary confidence. The combination of QE with fiscal spending was meant to be the full suite in terms of meeting that shortfall.

It didn’t work. In 2014, however, economists thought there was a good chance that it had. One of their reservations at the time was what they call hysteresis. Hysteresis is relatively simple concept that is often given a more complicated spin than it really needs. In terms of stimulus, whatever program of stimulus needs to overcome frictions either as a result of the contraction or recession as well as perhaps other structural inadequacies. Janet Yellen, for example, in one of her first regular FOMC meeting press conferences in June 2014 provided a perfectly succinct summation of one of these frictions:

Of course, we’ve had unusually long duration unemployment. A very large fraction of those unemployed have been unemployed for more than six months. And there is the fear that those individuals find it harder to gain employment, that their attachment to the labor force may diminish over time and the networks of contacts that are—they have that are helpful in gaining employment can begin to erode over time. We could see what’s known as hysteresis, where individuals, because they haven’t had jobs for a long time, find themselves permanently outside the labor force. My hope would be that as—and my expectation is that as the economy recovers, we will see some repair of that, that many of those individuals who were long-term unemployed or those who are now counted as out of the labor force would take jobs if the economy is stronger and would be drawn back in again, but it is conceivable that there is some permanent damage there to them, to their own well-being, their family’s well-being, and the economy’s potential.

This has long been a realistic fear of persistent malaise, that those unfortunate souls who get pushed out in the first wave of mass layoffs never find their way back and in the process not only diminish their own personal financial capacity but also the economy’s ability to efficiently operate so as to grow in sustainable long-term fashion. In the post-2008 economy, that is no longer a fear but our reality.

They still pressed on with it at any rate, as Yellen further suggested at that June press gathering:

My own expectation is that as the labor market begins to tighten, we will see wage growth pick up some to the point where real wage growth, where compensation or nominal wages are rising more rapidly than inflation, so households are getting a real increase in their take-home pay. And within limits—well, that might be signs of a tighter labor market. Within limits, it’s not a threat to inflation because consistent with the level of inflation we have for our 2 percent inflation objective, we could see wages growing at a more rapid rate and—a somewhat more rapid rate—and, indeed, that would be part of my forecast of what we would see as the labor market picks up. If we were to fail to see that, frankly, I would worry about downside risk to consumer spending. So I think part of my confidence in the fact that we’ll see a pickup in growth relates to the fact that I think consumer spending will continue to grow at a healthy rate. [emphasis added]

That “downside risk to consumer spending” did, in fact, materialize in just a few months’ time. By the end of 2014, the risks were becoming reality but even then economists persisted with their upside down view of the unemployment rate for reasons that in hindsight (as well as foresight) appear to have been more emotional than rational. Truly rational analysis would have been like highlighted portion of the Yellen quote immediately above, which was just discarded anyway as a matter of biased disbelief. She said that she worried about the “downside risk” but dismissed it anyway as it was happening; how worried could she really have been? 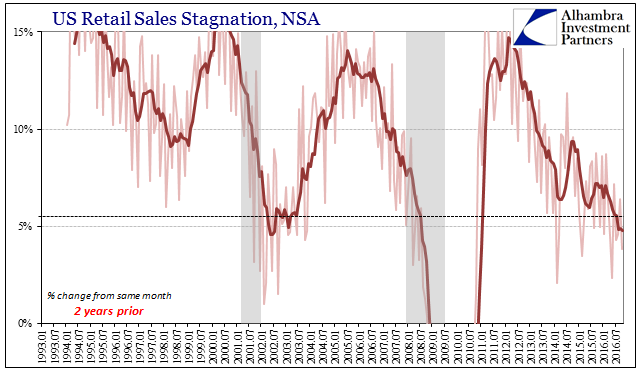 They are that now, though. The concept of hysteresis has made its reappearance as part of the post-QE assessment (limited as it has been). In an October 2016 speech, one that I have dubbed her “maybe we really don’t know what we are doing” confessional, typical stimulus was again applied except this time, conceptually, where maybe the Fed actually takes these long-term concerns more seriously this time. They promise:

For example, hysteresis would seem to make it even more important for policymakers to act quickly and aggressively in response to a recession, because doing so would help to reduce the depth and persistence of the downturn, thereby limiting the supply-side damage that might otherwise ensue. In addition, if strong economic conditions can partially reverse supply-side damage after it has occurred, then policymakers may want to aim at being more accommodative during recoveries than would be called for under the traditional view that supply is largely independent of demand.

It is a variation of the magic number theory whereby Yellen was trying to claim that though QE was large and persistent it still just wasn’t large and persistent enough. This view draws from what seems like common sense, by that I mean on some level it seems to be the case where if the economy were to be perhaps “over-stimulated” more than the usual “accommodation” then the resulting pickup in aggregate demand would be so strong that businesses would be forced to hire even the long-term unemployed whose skills have all but disappeared. The flaw in the “logic” is obvious in review of the past nine years.

Policymakers keep claiming that what failed was not the concept of “stimulus” but rather its execution, whether that be the wrong size (always too small) or the wrong place (QE instead of yield curve “control”, for example). They never seem to go back to the more fundamental proposition, that hysteresis isn’t truly the problem as more so the way in which they intend to create “accommodation” is. What good is it to contemplate overcoming hysteresis through greater and more intense “accommodation” when recent history shows little evidence of any accommodation at all? 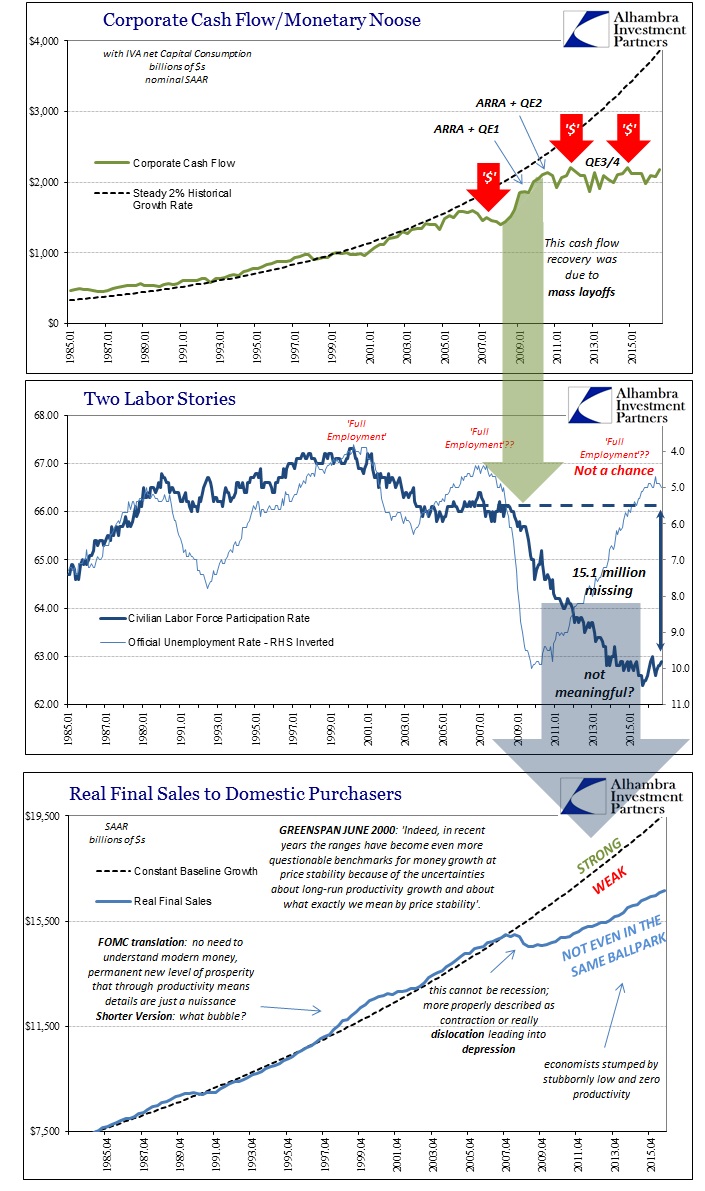 This is one reason I remain far from sanguine about even the current year where economists have finally recognized all their grand schemes from several years ago actually didn’t work. In certain places in certain markets the fact that such sudden objectivity is apparent has been taken to its furthest extreme – that by figuring out several years after it should have been obvious, authorities will now get it right. One does not necessarily follow the other, and everything that we see and hear right now from official channels demonstrates pretty clearly that admitting QE failed was in these channels very limited progress. If it takes all the events of the “rising dollar” just for you to realize that what you thought QE was actually wasn’t, then that says a lot more about you than QE.

Instead, economists have set themselves the task of coming up with the next set of grand schemes that they will talk about in the exact same way they once did of QE; without demonstrating the slightest level of self-awareness that that is what they are doing and will continue to do. There is, right now, every reason to believe that “stimulus” is in all likelihood still going to be “stimulus” rather than finally being stimulus. Janet Yellen, as several other economists and central banks, seems to have arrived at the conclusion that QE didn’t actually fail, per se, it was just not enough to overcome the hysteresis forces embedded within the denominator of the very unemployment rate that for most of the past two years they used to justify instead their confidence that those negative forces weren’t all that significant.

This is Economics. If it registers confidence within you, then my hat’s off.