Before October 1997, what would become known as the Asian flu was just another opportunity for the mainstream to dismiss what many people, including many prominent, competent people, had been warning about for years before. The usual refrain thrown back at them was some form of “you are missing out.” People, of course, never really learn from these episodes because they have a very human way of convincing themselves it will be different the next time.

What changed that October back amidst the roaring dot-coms was first the Thai baht. Thailand’s currency had plunged earlier in summer of ’97 and the Bank of Thailand was no longer able to contain it, though it did try. In what might have been the first instance of the “ticking clock”, each of their forward operations simply made the next one inevitable and inevitably worse. It was the spread to other Asia countries that one after another became swept up in what was the first wholesale “dollar” problem for anyone to take much notice. Thailand, though an Asia “tiger”, was still just a speck on the global economy, and the baht didn’t really register as anything more than a “hot money” niche.

On October 17, 1997, however, Taiwan left its currency peg. A week later, the Hong Kong Monetary Authority (HKMA) in order to defend the Hong Kong dollar (HKD) briefly drove overnight interbank rates above 250%, spending more than $1 billion in dollar support. The Hang Seng stock index between October 20 and 23 crashed by 23%, down 10% in one day alone. That finally got the world’s attention.

Though most of Asia was trapped by the “dollar” liquidity problem, Hong Kong, despite its inauspicious entry into the episode, fared quite well. HKMA successfully defended its currency peg where almost everyone else was forced to abandon theirs, and throughout 1998 Hong Kong was actually included as one of the so-called second line of defense contributors who, along with Australia, China, Japan, Malaysia, Singapore, and the US, meant to pool sufficient “dollars” so as to end the growing disaster.

The reputation of HKMA thus established, Hong Kong has since largely been a very boring place; which, of course, is exactly the point. Even in the events of 2015 and early 2016, there were only passing concerns about Hong Kong proper even though it is in most ways fully integrated within China. Though it has an offshore financial relationship and a separate currency regime, there are more linked channels than the general assumption. 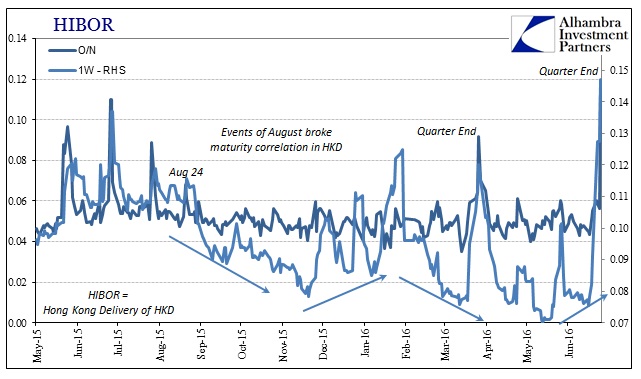 What you find in review of the Chinese fireworks from last August from the Hong Kong perspective is that reputation. Just to be clear, what you see above and what will be presented below is HIBOR for Hong Kong dollars, the local currency for Hong Kong and separate from HIBOR (CNH) which is instead Hong Kong (offshore from the Chinese perspective) delivery of Chinese RMB. During the first eruption of global liquidations of which mainland China and CNY were a catalyst, excess liquidity pulled back into HKD especially at the longer maturities. Thus, HIBOR rates, though hugely depressed near zero already, actually dropped further as Hong Kong was one of the few ports of safety (the role of Japanese and British banks should be noted here, but I don’t want to get too far off topic by examining these links further).

The Hong Kong situation changed somewhat in later November 2015 as CNY began to fall again, where 1-week HIBOR (HKD) rates moved back up if even so slightly. It remained that way throughout the second global liquidations in January and February, only to see a return of large excess funding once the PBOC intervened on February 11. The direction of the 1-week rate changed yet again in mid-May 2016, as the Chinese “ticking clock” struck and CNY began falling all over again. 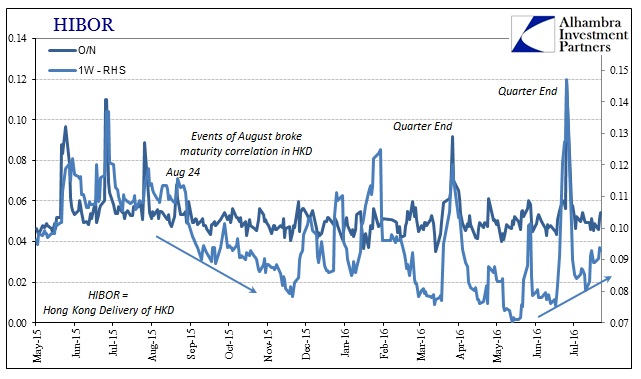 Up to that point in May, however, these were really minor variations that reflected, I believe, the reputation of Hong Kong and really the superior situation brought via the HKMA. There was a growing quarter-end phenomenon that we have become familiar with in dollar money markets, though that may have indicated a return toward normalcy (before August 2015) than anything. In mid-August this year, however, minor shifts have become less minor. We know mid-August very well for all that changed in China, as CNY suddenly divorced from onshore RMB liquidity later in the month. 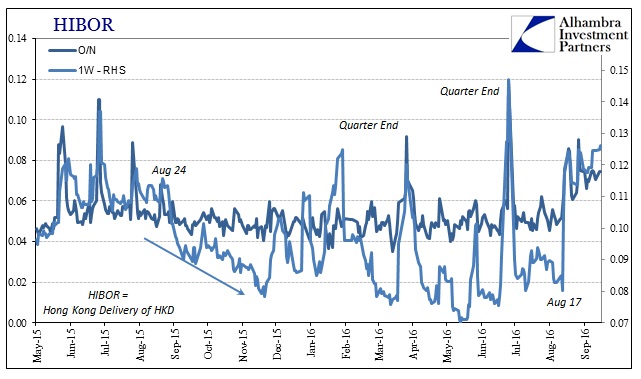 Given what we see in HIBOR (HKD), we can only assume that whatever the PBOC had started doing was having serious spillover effects so as to reset not just longer maturity HIBOR but even the overnight rate in a deleterious way we have not observed before. 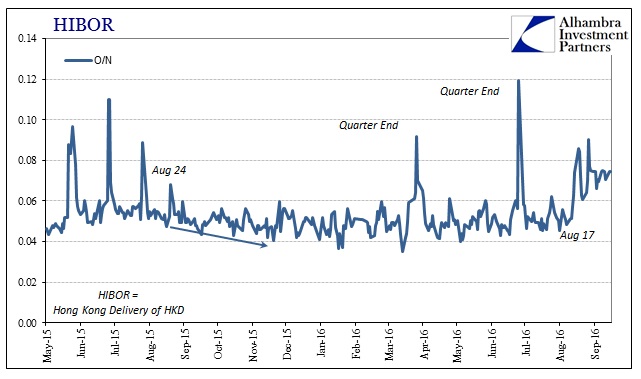 Throughout September as Hong Kong RMB rates (CNH) exploded, conditions in the Hong Kong dollar (HKD) markets likewise failed to settle back down. By the end of Q3, HIBOR rates jumped, again a familiar occurrence not just to Asian money markets (including onshore RMB, SHIBOR) but dollar markets as well (US$ repo). 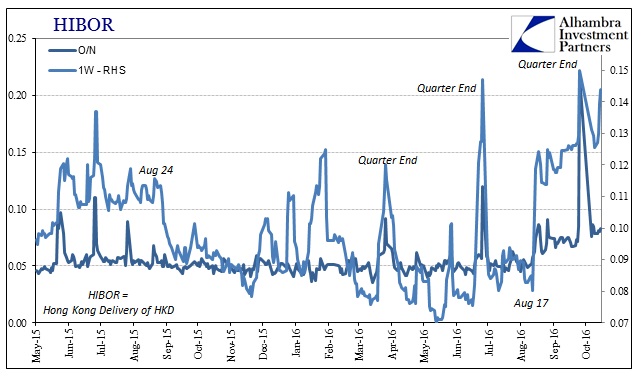 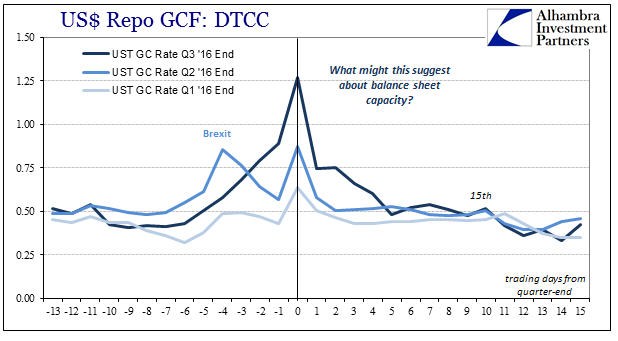 It was highly unusual in US$ repo to find not just a concerning quarter-end rate, but really how the repo rate rose significantly in the week before and remained high in the week after. That elongated “quarter end” was replayed in Hong Kong markets as this highly irregular volatility continued later in October. I have submitted that the PBOC initiated an RMB operation around October 25 as a desperate attempt to dispel growing RMB (onshore) illiquidity, showing up in things like the copper price explosion, but here it is in HKD raising liquidity rates contrary to the onshore intent. 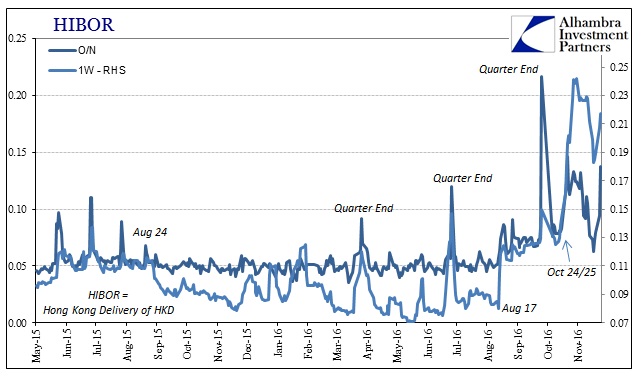 But all that was just, apparently, the prelude: 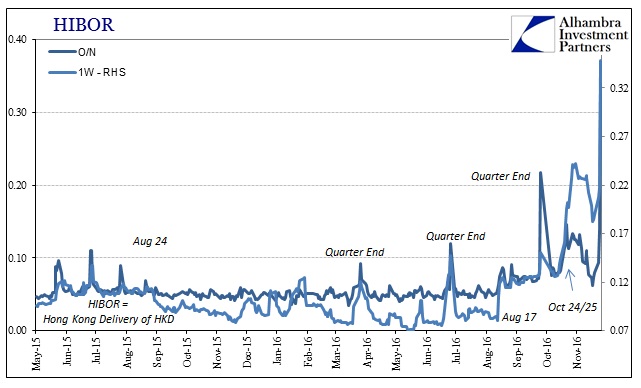 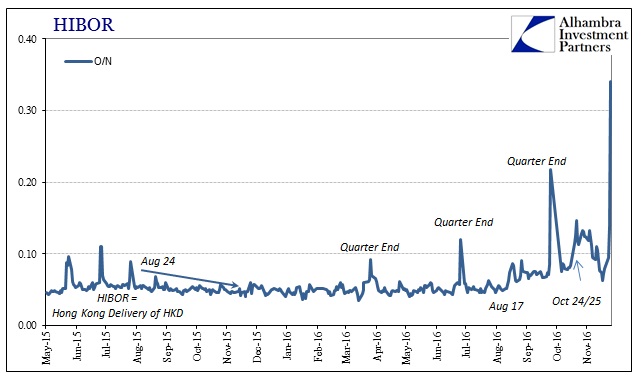 Today is a month-end but not a quarter-end; as you can plainly see above, there are no regular month-end window dressings. Instead, what we are left with is the same familiar irregular rise in Hong Kong money markets as indicated almost everywhere else. The left side of the chart starts out somewhat flat if irregular and then the right side is increasingly a volatile mess; a pattern, again, replicated in so many places. 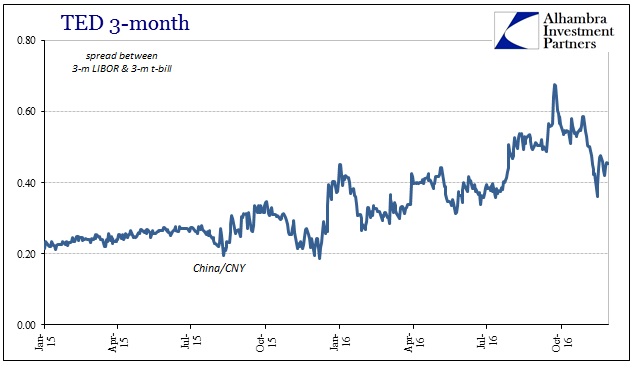 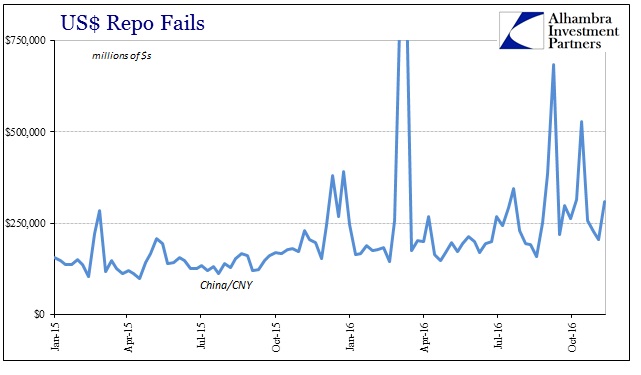 The difference of Hong Kong and HKD is one of time; it mostly sat out 2015’s “rising dollar” but is apparently unable to resist the “something” that has been building since this summer (July). That would seem to indicate, quite strongly, escalation. And while US markets continue to be blissfully unconcerned, you can be sure that there is no such sanguinity and complacency right now in Asia.

To further highlight that point, as well as to bring it all back to the “dollar” again, Japan basis swaps dropped today to a new negative low. Rising dollar = dollar shortage = global money shortage. Hong Kong is just the latest to be caught up in it, and that is significant.