The American Enterprise Institute’s Francis Boyer award was established in 1977 by pharmaceutical firm SmithKline Beecham in memory of its former CEO. The purpose of the honor is to recognize those who have given significant contributions to government policy and social welfare. As sponsored through an erstwhile conservative think tank, the award, presented up until 2002, was given to prominent conservatives; Gerald Ford being the first recipient in 1977.

Columnist George Will was presented with the honor on December 6, 1995, telling the audience in his lecture about how he felt conservatism suffered from a “crippling contradiction.” The incongruity was, in Will’s view, a populist disdain for central government where in a system that truly limited government required some serious level of respect for the functions of that government. But, as Will argued, “that is not easily elicited in a commercial republic of the sort conservatism celebrates, where individualism enjoys maximum scope for private pursuits.”

The context of the middle 1990’s provides in hindsight a striking background for that argument in rejection of the sort of populism given spreading animation today. Back then, it was thought, we all had it so good that perhaps we should just be happy with the new prosperity. What if that prosperity were shown to be fleeting, hollow, or just plain false?

Of course, nobody remembers what Will argued in his homily but everyone remembers the one that followed it the next year on December 5, 1996. It has been twenty years now since Alan Greenspan uttered the words “irrational exuberance” in acceptance of his turn at the Francis Boyer honorific. Two decades later, people still easily conceive of the popular definition of just those words, no context need ever be provided, as even in complete isolation they scream out “bubble.”

The DJIA had been up 25% from the start of 1996 until Greenspan’s speech, and his seeming admonishment only served as a temporary speed bump as the dot-coms were, unfortunately, just getting started. Still, stocks fell sharply the day after, as the New York Times headline the next morning blared out, Stocks Worldwide Dive as Greenspan Questions Euphoria. The context of irrational exuberance is always stocks.

That was certainly the case in at least Greenspan’s memory, as he tries to confess in his 2010 memoir The Map and the Territory. In it we learn from the “maestro” himself that he once told Fortune Magazine as a young economist in 1959 that he was concerned about “over-exuberance.” His first use of the phrase was in a comparable warning that ultimately proved very wrong, of course, so by his retelling he positions himself to have been more reasonable that second time.

To me, that speech in December 1996 wasn’t even about stocks; I often wonder if Alan Greenspan even remembers the whole thing rather than just those two words out of the more than 4,000 he said. Those two make his tenure seem a lot less incompetent, so it wouldn’t be surprising to find him fourteen years later trying to claim that he got at least one thing right. It doesn’t, however, square with the rest of his tenure where just a few years later he enthusiastically, irrationally even, embraced the idea of a new prosperity, one built on productivity that in many ways would have owed its continued existence to what we now rightly recognize as an irredeemable asset bubble. In short, he bought his own PR only a short time after suggesting it might be dangerous to make such assumptions.

Stocks were only a small part of what he was trying to say, not the least of which because the topic of his lecture was The Challenge of Central Banking in Democratic Society. From that standpoint, it could seem as if “irrational exuberance” was outside the bounds of central bank discourse; it wasn’t the role of government in the form of a central bank to intrude upon that which private citizens do themselves, no matter how ridiculous and ultimately extreme. The genesis of these possible extremities was why that speech was worth remembering.

He importantly began by reciting and acknowledging the “profoundly divisive role of money” in the context of William Jennings Bryan’s 1896 “cross of gold” speech; a different form of populism that championed specific irrationality as a means to diffuse the natural capitalist advance of an agrarian economy becoming more fully industrialized (one where society as a whole benefited, but one that we also have to recognize was very messy and uneven as a “price” for that gain). As Greenspan professed, the Fed or any similar institution with monetary authority, “…in a democratic society is a magnet for many of the tensions that such a society confronts.”

One of those tensions was specifically monetary. As he had been given authority for the safeguard of the nation’s money supply and by extension its economy, the “maestro” in December 1996 was more than a little concerned about the nature of money itself as something very different than had been envisioned decades prior. Before he ever said the words “irrational exuberance” Alan Greenspan defined the economic challenge that confronts us still:

At different times in our history a varying set of simple indicators seemed successfully to summarize the state of monetary policy and its relationship to the economy. Thus, during the decades of the 1970s and 1980s, trends in money supply, first M1, then M2, were useful guides. We could convey the thrust of our policy with money supply targets, though we felt free to deviate from those targets for good reason…

Unfortunately, money supply trends veered off path several years ago as a useful summary of the overall economy. Thus, to keep the Congress informed on what we are doing, we have been required to explain the full complexity of the substance of our deliberations, and how we see economic relationships and evolving trends.

That became the standard procedure in the 1990’s Fed, something that continued into the 2000’s and does so still today. They stopped focusing on money because of the, “absence of simple, summary indicators.” Rather than design monetary policy by the level or consistency of money that went in, they would instead work backward by trying to regress, mathematically, the economy that came out. Therefore, in the later 1990’s you might appreciate, if still condemn, how Greenspan himself could be so fooled even after issuing his ostensible warning almost four years before it all popped (the first time). 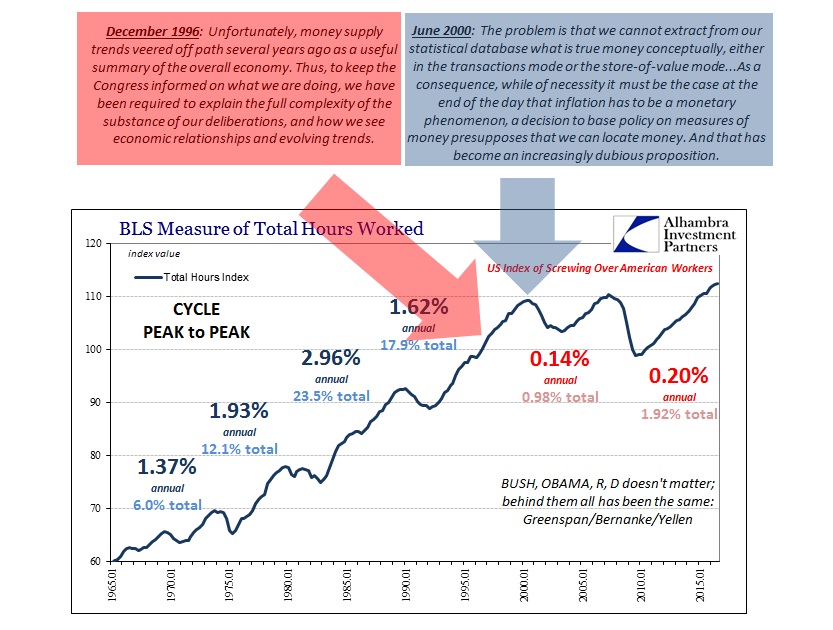 There is a direct line from these difficulties in defining money even before the 1990’s to the “irrational exuberance” of the dot-com bubble to the greater mania of the housing bubble and then to the crash and depression that has followed. To orthodox Economics, how such Great “Moderation” could end in Great “Recession” remains a total mystery. What Alan Greenspan was saying twenty years ago today was that, in essence, even he, the great monetary leader and maestro, could not be sure that it really was a Great “Moderation” – because it wasn’t, as we can plainly observe from the wreckage of the 2010’s.

That wasn’t quite what he had in mind when he gave that speech, however. Again, his topic was the role of central banks in a democratic system, where the central bank was supposed to have had limited intrusiveness. Thus, what he was saying from his perspective was that he was worried as an outside observer that the dispassionate Fed could not any longer define the money of the private sector. As statutorily mandated to do so, however, this wasn’t strictly an academic debate; thus the grave and misunderstood policy dilemma of “irrational exuberance.” 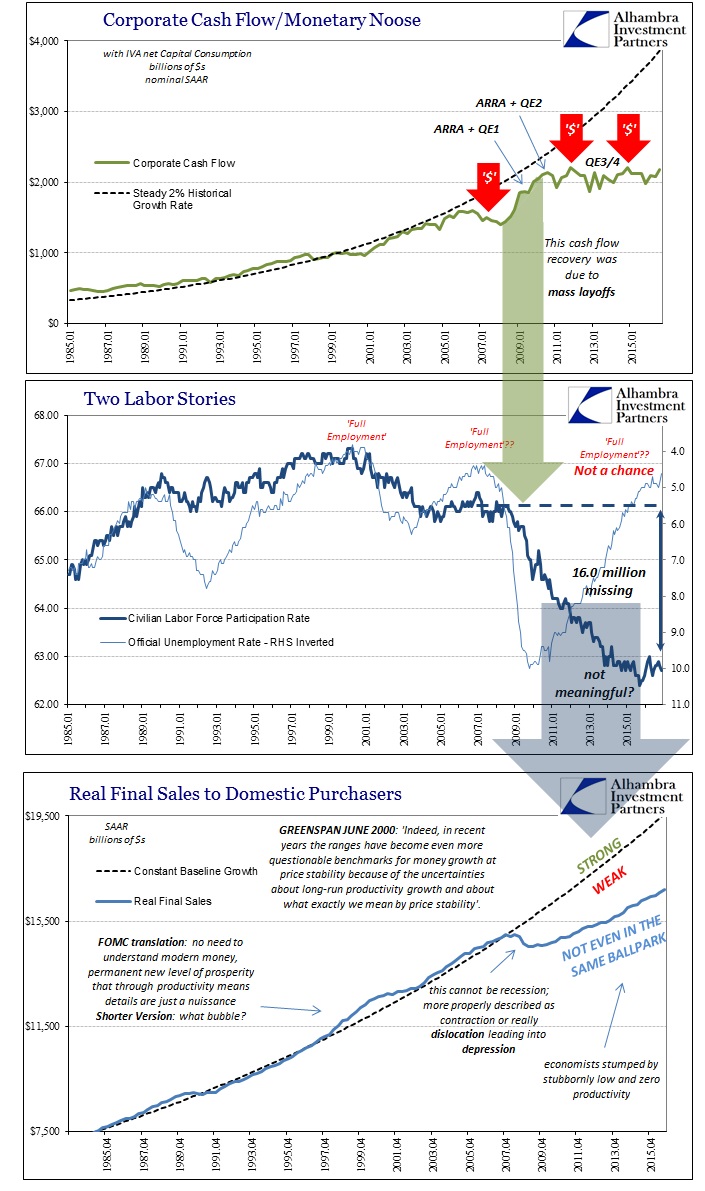 The real problem was that this was not purely a private money matter. In other words, as in the 1920’s, the global “dollar” system was a hybrid money system. The eurodollar’s ascent took place apart from and beyond the Fed’s control, but it did so with the belief that money in whatever forms it was taking would have been backstopped by the Fed at some point (which it wasn’t, nor realistically could it have ever been). It was, basically, an understanding of TBTF in implicit form that was given a wink and a nod approval of sorts in the LTCM affair that was in every way a limited rehearsal of 2007/08. Private eurodollar participants came to believe that even if the Fed had no clue about money, they could somehow engineer the right monetary result, like LTCM, if pushed to.

That was the worst part of it, as “irrational exuberance” infected all sides of the eurodollar system, where the private eurodollar actors came to believe in the Fed’s central role, if in the background, where at the same time Fed officials likewise became further convinced they need not know money, just handle whatever results from whatever it is.

It was a recipe for certain disaster, the dot-com bubble being the first major warning. But as “irrational exuberance” has become improperly tied to stocks specifically, and asset bubbles more generally, the downside of this monetary evolution is broader in its impact. The global economy was being altered by the money system from all sides; from eurodollar expansion not just in the US asset bubbles but also the EM “miracles” including China that correspondingly created the illusion of permanent prosperity (the preposterous “global savings glut”).

What the world thinks of Alan Greenspan’s 1996 speech and his words of “irrational exuberance” is that he correctly forewarned of stocks that were getting expensive. What he really said was that money itself was no longer so easily defined and therefore monetary policy was a far more complicated process that would have to (in his view) focus on the ends rather than the means. An asset bubble (or two) was just one possible outcome of monetary ignorance. By the later 1990’s, he and the FOMC came to believe that ignorance was no impediment to smooth and fruitful operation. Like the stock market, that economic paradigm would also come crashing down; it has yet to recover.

There really was and is no excuse; it was, after all, his job. Instead, he hid behind the walls of democracy as he saw them to improperly define limits about where the central bank could even probe. That’s not quite what everyone had in mind when they saluted him and his briefcase, a passive, ignorant if occasional fine-tuner. It was then and remains today the monetary policy contradiction; monetary policy claims to fully control money, now more than ever, but at the same time refused(s) to examine it in detail (M3, as an example) as if doing so will be too “populist.” It is not now nor was it ever irrational exuberance, it has been this whole time irrational ignorance.

The global recovery starts with re-examining a two decade-old cliché’s that was much, much more than what it is thought to have been.