The Office of the Comptroller of the Currency won’t release its collection of bank call reporting for Q3 2016 until January. There is a great deal about the aggregate US bank derivative book in that particular quarter that is of particular interest. Though we will have to wait for that update, there is still some value in reviewing parts of it through Q2 as a way to frame our deeper understanding.

The overall direction of derivatives is still trending down. Total notionals, our rough proxy for balance sheet capacity devoted to the expansion of chained liabilities, increased in Q1 modestly, but were slightly lower again in Q2, though still above the level from Q4 2015 (and below Q3 2015). At $189 trillion, that is 24% less than the peak set, importantly, in Q2 2011 just before the re-flaring of global bank crisis. 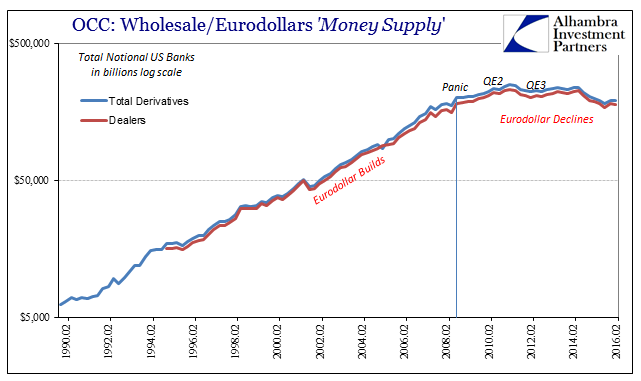 There are other dimensions to consider beyond vanilla notionals, however, though a detour into such depth can often be confusing (and my own limitations in writing about it makes it that much more difficult to understand). Warning aside, one of the major points of emphasis for the OCC with regard to bank risk arising from derivatives is something called the Net Current Credit Exposure (NCCE). The chief credit risk for any bank in the simplest terms is that it won’t get paid back. If it lends out money, it has taken credit risk; if it lends out more money, it has taken more credit risk. NCCE functions along those lines.

A derivative transaction is obviously more complicated, but it helps to maintain that frame of reference. In any derivative, whether forward, swap, option, or swaption, there is the potential exchange of cash flows. These possible transactions are modeled into present values for all sorts of purposes, including regulatory requirements and internal risk controls. From the standpoint of an investor, hitting a winning trade is an unqualified positive. If, for example, you buy an interest rate swap taking the fixed side and interest rates overall decline, then the present value of future cash flows in your direction is that much greater.

For a derivatives dealer, the same situation is actually more complicated. As the value of that interest rate swap rises because statistical models project more cash flows coming in the bank’s favor, it is the same as if the bank had lent “money” to the counterparty. It initiates or adds to what is essentially a receivable asset that needs to be funded and managed. In other words, the more the swap increases in value, the greater the receivable and therefore the potential credit and funding risk.

Typically, dealers offset this risk by taking the other side of trades. They are not interested, mostly, in winning any particular transaction or betting on a certain outcome. As dealers, they make money by providing overall capacity and managing the risks of that capacity (market maker). What you will always find is a very close relationship between the positive values on derivatives and the negative values all inside a dealer book (matched book).

It is not, however, a perfect relationship which is where all the fun starts. A completely matched book is impossible, and therefore all sorts of risks enter into these equations that are managed more often imperfectly due to all sorts of asymmetries. Because of this, the OCC focuses on only the positive side of the equation; those transactions with a positive value, meaning those where the bank is expecting cash flows from counterparties (as in receivables and the credit risk of those modeled receivables).

Using bank call sheets (RC-R, RC-L), the OCC tabulates a Gross Positive Fair Value (GPFV) across all US dealers and bank institutions required to report to it. Though there are dozens of banks in this situation, almost all derivatives are traded by and through the four largest (in order): JP Morgan Chase, Citibank, Goldman Sachs, and Bank of America (via its Merrill Lynch “acquisition”). Of the $189 trillion in total notionals at the end of Q2, $172 trillion, or 90%, were reported by just those four banks. The total GPFV in that quarter for all banks was $4.08 trillion.

That means that US banks, but primarily those four, are expecting via statistical analysis an inflow of cash amounting to a present value of more than $4 trillion. That’s an enormous amount of potential risk, and it is situation that has arisen, overall, more so since the panic in 2008. The GPFV in the current quarter is 3.4 times greater than at the start of 2007. 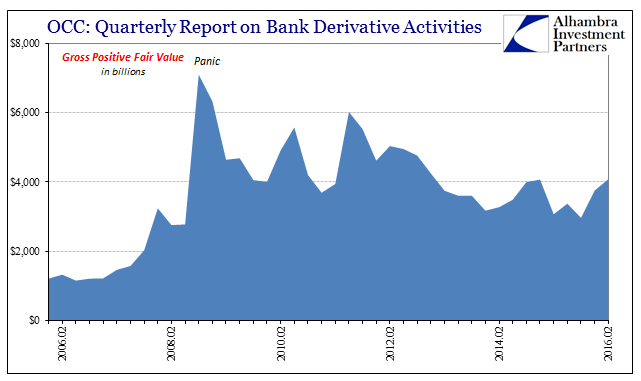 This potential risk is hedged, collateralized, and otherwise legally netted; that’s how dealers operate. There are rules governing the netting process, including how and when a bank might use the same counterparty for a transaction that will take an offsetting position leading to a netted risk exposure. There are also certain conditions for how collateral is treated and its eligibility to be used in this manner. Given these limitations, overall the OCC figures US banks reduced that gross exposure by $3.57 trillion. Therefore, the Net Current Credit Exposure (NCCE) in Q2 was $506 billion.

That was an increase of $46 billion from Q1, as GPFV’s rose from $3.75 trillion. In other words, banks did not perfectly match, hedge, or collateralize the whole increase in modeled positive cash flows. Thus, their net risk exposure inceased, something that has been happening, unsurprisingly, during this whole “rising dollar” period. 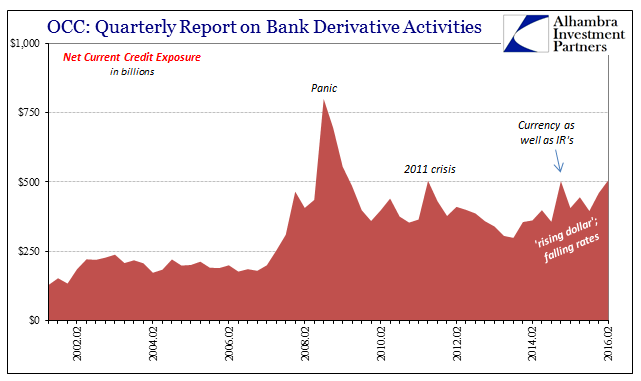 Because interest rate swaps are the vast majority of all derivatives, GPFV and therefore NCCE are heavily influenced by the direction of interest rates. Positive fair values increase the most when rates fall sharply, as you can plainly see above. From late 2013 to July 2016, US treasury yields fell more or less throughout, leading to higher GPFV. For “some” reason, however, this increased credit risk was not hedged or collateralized efficiently; what was a relatively small NCCE of $298 billion in Q4 2013, one more like the pre-crisis era, is now back up to $506 billion, just slightly more than Q3 2011 as the highest level since 2009.

Credit exposure isn’t entirely due to IRS and interest rates, however, as Q1 2015 shows the risks that can arise from currency derivatives. The Swiss National Bank’s “unexpected” deviation from its prior franc peg to the euro caused enormous currency volatility – and it is volatility that plays a central role in all of this modeling. The effect was partially responsible for the huge increase in NCCE in Q1 2015, showing the great difficulties dealers had at that time laying off risk (again, while sharply rising positive values are the whole point for an investor in a specific trade, they are not for a dealer running, or trying to run, a matched book). 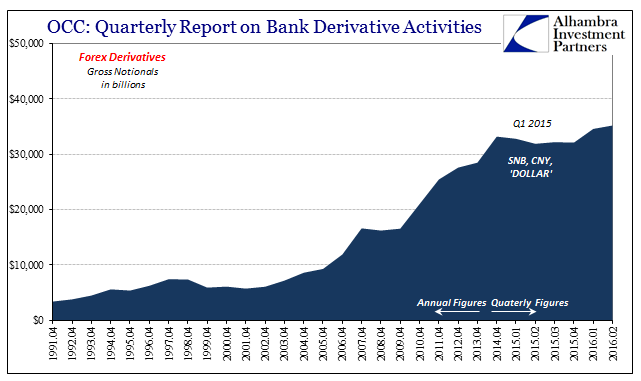 The effects of that part of the “dollar” shortage were enormous. Gross notionals of forex derivatives had been rising since 2009, partially offsetting the retreat in overall derivative books elsewhere (IR and Credit), and demonstrating once more how the eurodollar system constantly evolves (even now). But that increase abruptly ceased in Q1 2015. Though overall notionals are up marginally in each of the first two quarters of 2016, obviously it is nothing like what forex derivative expansion “would” have been had the prior trend remained unbroken. It is during this exact period where cross currency basis swaps re-entered the financial press at increasingly and record negative premiums in all the major currencies (“dollar” shortage).

From these three pieces of inside derivative data (GPFV, NCCE, and Forex Notionals) we can reasonably piece together what happened, though none of it is a surprise. The “rising dollar” created increasing risks which the major dealers (or smaller participants) could not offset timely and efficiently, sparking a major reassessment in global forex (as well as IRS) capacity provided by US banks. And though the increased net risk (NCCE) into the second quarter of 2016 was primarily due to falling interest rates (which will reverse starting in Q3), it was not entirely related to the collapsing yield curve.

Thus, what will be most interesting as far as confirmation will be GPFV and NCCE related to forex positions and how much further behind in gross notionals US banks have become in Q3. After all, we know very well that especially cross currency basis swaps fell even more negative in those months than at all prior times and points. It was also been a hugely disruptive period that created the conditions for what we see in Q4.

What we are measuring here, in rough terms, is capacity. A functioning eurodollar system would operate much as it did prior to 2008, where changes in interest rates or currencies didn’t provoke massive swings in NCCE because there was more than sufficient capacity for dealers to model (math as money), hedge, and collateralize at the time even notionals expanding geometrically. 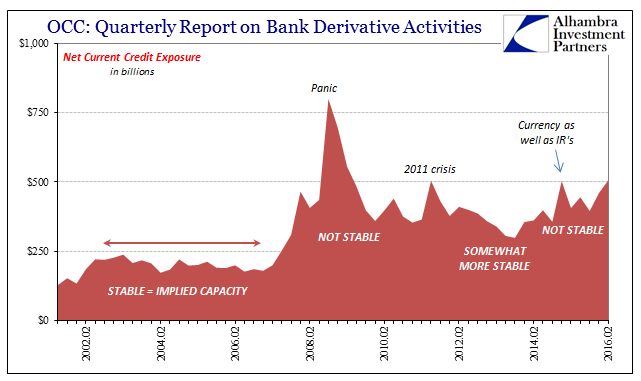 Like the TIC estimates, these derivative figures provide another corroboratory window into separate but related dimensions of the eurodollar system. And like TIC, it would be enormously helpful if they were timely. That is especially true of very needed reform, which should take the form of what I wrote earlier today:

Perhaps yesterday’s petulance will help in the real reform, which is quite simply redefining global money and global central banks to what they really are.

There is almost nothing of central banks in these figures, but there is everything about what has happened and, more importantly, why; things that economists viewing QE as money will never be able to translate and comprehend.