The term “brick and mortar” has come to be a mostly 21st century antonym for online shopping. It was first used in the banking industry as far back as the early 1970’s. Banks led the adoption of innovations, foreseeing the possible gains in communication technology and not just in the eurodollar context of “floating” currency (shadow banking). Computerization even at that early stage held great potential to revolutionize how banks would actually function in their day-to-day interactions with customers (actual banking).

In 1976, during the 94th Congress, the Senate Committee on Banking, Housing, and Urban Affairs’ Subcommittee on Financial Institutions held hearings on the introduction of machines like ATM’s and CBCT’s (Customer-Bank Communication Terminals) that seem quaint four decades later but were radical in scope upon introduction and sudden widespread embrace.

Mr. Bartell   That is the tough part. Arguing about the future is very rough.

Senator McIntyre   Thank you. Just a word or so. I want to get to Larry.

Mr. Bartell   Just on this point, though, are electronic terminals a substitute for or an alternative to brick and mortar branches?

Senator McIntyre   Dr. Mann, in Chicago we were told that electronic transfers were being widely accepted by the public at large, and they will make brick and mortar obsolete.

Bank branches instead continued to flourish, augmented by ATM’s and other communications technology, mostly because banks had not figured out an alternative sales distribution channel (until the housing bubble). The advent of the internet brought out these same types of questions and, from the point of view of retailers, concerns for the retail industry as a whole. The late 1990’s were filled with mostly broker “research” of the next great dot-com which was going to end the need for any brick and mortar stores.

While that was almost pure hyperbole, it was at least a nod in the right direction. Department stores were once the kings of retail, but starting in the year 2001, just prior to the dot-com recession, retail sales of Department Stores began what is now a long decline. It wasn’t entirely due to online shopping, as there were other factors at work, but by and large Department Stores have been dying for sixteen years. 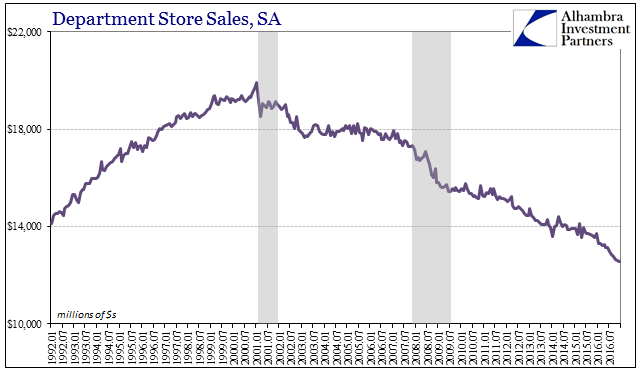 Because of that, it is easy to dismiss their plight as nothing other than these technological adoptions that have been talked about in one form or another for more than forty years. At the start of this year, both Macy’s and Kohl’s announced layoffs and cutbacks that the Wall Street Journal and others attributed primarily to being brick and mortar troubles.

Macy’s Inc. said it will slash more than 10,000 jobs and detailed plans to close dozens of stores after another holiday season of weak sales, providing more evidence that department stores have lost their once-central place in American retailing.

Again, there is no disputing the reality of the hardships traditional retailers face, but that doesn’t eliminate any macroeconomic elements from the data; it merely adjusts the baseline for making these interpretations. In fact, when reviewing Department Store sales there are very distinct economic patterns to them, just shifted more below zero than in other parts of the retail/consumer universe. 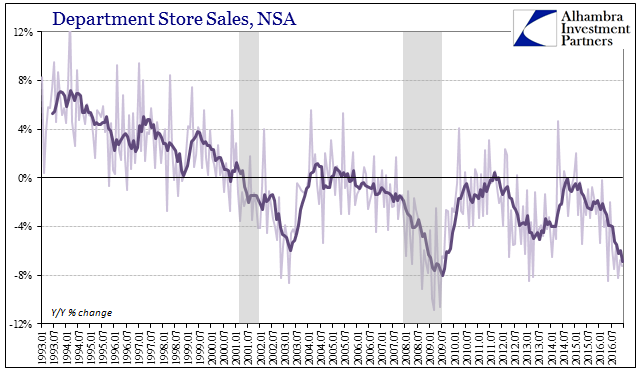 What immediately jumps out is that for Department Stores like Macy’s, their experience and revenue as a group in 2016 were about the same as they were in 2008. Taking just the Christmas shopping season, November and December combined accounting for about one-quarter of all annual sales, you can see why some traditional retailers might be making drastic changes, and those who haven’t announced any are surely thinking about them. 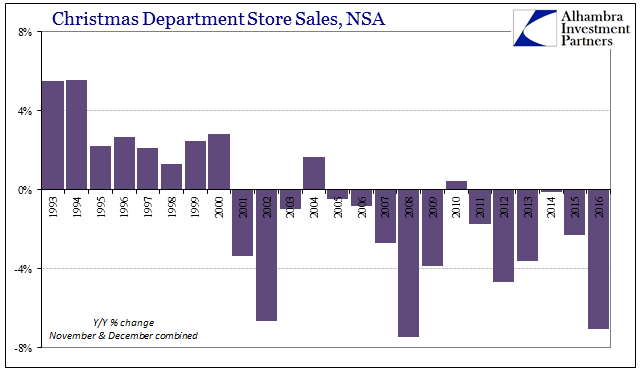 Again, the macro pattern is obvious even within the overlying baseline decline due to the shift toward the virtual. When the economy is rough, consumers seek either alternatives or just don’t spend at all. In 2016, online sales picked up some of the distress, but only some. Nonstore sales have seen their best run since 2006, just prior to the collapse of the housing bubble. Because of that, attributing anguish to brick and mortar is easy. 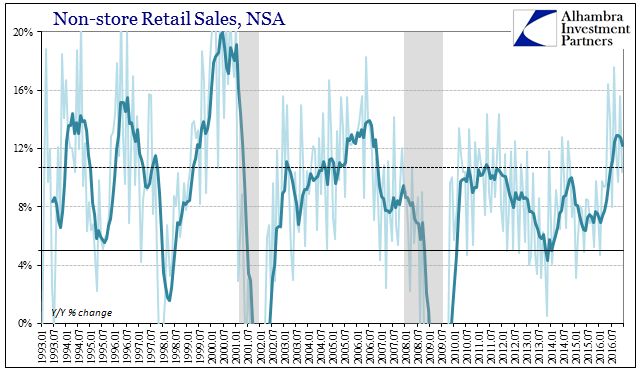 But if we combine sales from traditional channels (General Merchandise stores, a broader category for brick and mortar which includes Department Stores) with those from Nonstore Retailers, the so-called Bricks and Clicks, we see that overall retail sales are nothing like what they were a decade ago. 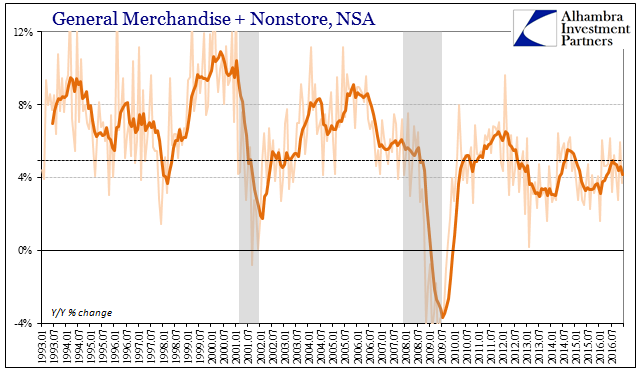 In June 2006, right about the month where everything started to go wrong, combined sales of bricks and clicks was an average of 8.5%; as of December 2016, it was less than half of that growth rate, just 4.2% and with sales in December below that average. That would suggest, again, if consumers are rushing toward the virtual it is more macro than the final fulfillment of 1970’s era expectations in the modern 21st century world.

We don’t really have to go far to see why that might be. Retail sales overall were disastrously low in 2015 primarily, but not completely, due to the collapse of oil prices and the effect the crash had on gasoline sales. But while consumers spent less at the pump, they didn’t spend those “savings” anywhere else (against all Yellen-like expectations), causing overall retail sales to average more like 2%, quite a bit less than the 3% rate usually found in recession.

In 2016, retail sales have improved overall, but in some good part due to gasoline sales rebounding with the price of oil. Rather than be purely accretive now just as it was deleterious then, gasoline sales appear to be coming back at the expense of other sectors. It isn’t an overwhelming trend, but it does appear significant. Retail sales ex gasoline were up just 4.2% in December, for a 6-month average of just 3.8%. Non-gasoline sales averaged 4.5% to end 2015, and 5.7% finishing up 2014. 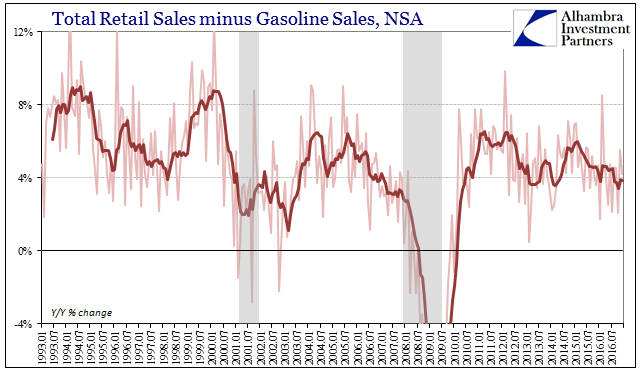 That’s right back in the same rut as in 2012 and 2013. Overall retail sales (ex autos) were up just 3.77% in December. The 6-month average is still stuck at just above 3%. This is not an indication of a rebound except so far as at least consumers haven’t retrenched further as they spend more at the pump. This is consistent with data we find elsewhere, including the huge increase in consumer credit that mirrors almost (too) perfectly the broad slump in labor utilization (hours worked). 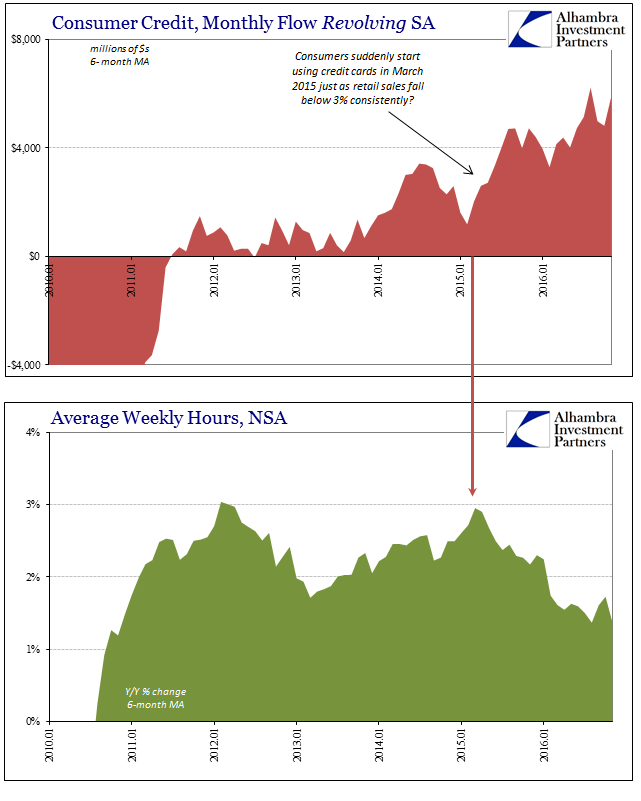 Retail sales are higher in 2016 than 2015, and that is an improvement given the near-recession conditions that prevailed as the one turned to the other. However, it is entirely unlike a meaningful recovery or “reflation” which would create actually robust growth rates (+6%). Further, since actual recovery would be accompanied by actual income growth, there would be much less drastic redistribution of sales throughout these various channels.