Dawn of Trump, A Plea For Sanity

Dawn of Trump, A Plea For Sanity

Jose Manuel Barroso was the former Prime Minister of Portugal who became the 11th President of the European Commission. Never one to be shy about sharing his opinions, in June 2012 at the G20 summit in Mexico he declared, “this crisis was originated in North America and many of our financial sector was contaminated by, how can I put it, unorthodox practices.” The political shot at the United States was in response to a reporter’s question about the prospects of foreign resources to be used to bail out Europe. Whatever one might think of his crisis analysis, it further underscored the nature of the event that frustratingly by 2012 still wouldn’t fade away.

To that end, it was Barroso who gives us perhaps a standard by which to judge where we are in all this. By “we” I mean, of course, the entire global economy. What is wrong is not European, just as it was it ever purely North American. In September 2012, at the EU’s so-called “State of the Union” he pushed for even stronger ties among Europe’s member states. The euro itself demanded further primary unification, in his view, including a common bank supervisor as well as that of sovereign budgets themselves.

It’s quite obvious that to sustain a common currency, we need more common power.

In 2017, the populists have made such chances small, and getting smaller all the time. Had Europe’s economy performed anywhere near to what it was supposed to, Britain would never have voted to leave, nor would the technocrat Italian government fallen so sharply at referendum. The Continent is moving steadily away from Barroso’s mandate.

In April 2013, newly confirmed US Treasury Secretary Jack Lew traveled to Europe with these concerns on his mind. He went primarily to urge Europe’s governments toward a “pro-growth” direction, which at that time was Krugman code for “enough with the austerity.”

Our economy’s strength remains sensitive to events beyond our shores and we have an immense stake in Europe’s health and stability. The United States has no bigger, no more important economic relationship than it does with Europe.

His message was not enthusiastically received, with many in Europe wondering what gave him the mandate to lecture anyone outside the US on such matters. The US economy, despite Bernanke’s self-defined “courage”, was no paragon of strength in a world sorely needing more than words and economic homilies. And so was born the idea of the “cleanest dirty shirt”, one that survived several years before the “global turmoil” of 2015-16 put to rest any gradation of and relating to economic laundry; after ten years and a great deal of broken promises, and more importantly a great deal of effort behind those promises, there was no reason why dirt should be the defining and unifying feature across the whole world.

When Europe fell back into official recession in 2012, the imposition of Obamacare upon primarily American small business played no role in it. Similarly, the sudden Chinese slowdown in that same year will never be traced to new and seemingly plentiful regulations imposed under the Obama administration. In fact, the regulatory creep of the US government did not begin in 2009 even though the Great “Recession” was then at its worst.

The Heritage Foundation estimates that from 2009 through 2015, the total number of new federal rules imposed was a mind boggling 20,642. As bad as that was, it was only a continuation of a trend that extended much further back in US economic history. From 2001 forward, encompassing all of George W. Bush’s two terms as well as most of Barack Obama’s, the overall total, which includes the number cited above, was 47,661.

Of those, 1,062 were classified as “major” rules changes under GAO terms, where any single one was expected to impose $100 million in annual costs. Those estimated to have increased the “burden” of the US economy broke down to 355 under Bush versus 229 under Obama (minus 2016, a year that saw a great many more proposed). By these standards, Heritage figures that Bush was worse than Obama, the former imposing $176.0 billion net increase in regulatory burden vs. just $107.7 billion for the latter.

Obviously, there is no uniform set of definitions by which to quantify who was worse, as that isn’t even the point. I am not in any way making a political statement here, but merely an economic one related to the past ten years. A lot has been written about the first official day of the Trump administration and his promise to roll back about 75% of regulations. This should be applauded as forcefully as one might be able to, but just as the rising tide of government rules was clearly not the cause of the global economy’s synchronized and ongoing catastrophe, it is also not the answer to that stagnation, malaise, depression.

Obamacare and the regulatory state have been unnecessary impositions upon the US economy, but that is not the same as suggesting they were the reason there was no recovery. I have no doubt that they made it worse and much harder than it needed to be, but had they never happened I am quite sure there still wouldn’t have been a recovery anyway. Pace this morning’s recollection of Bernanke’s standard for success, the US economy might have outpaced Europe’s economy that much more but that truly doesn’t mean much.

If there was one positive sign about the new Trump administration it came late last week in the form of Treasury Secretary nominee Steven Mnuchin’s Senate Finance Committee testimony.

The average American worker has gone absolutely nowhere. The unemployment rate is not real. 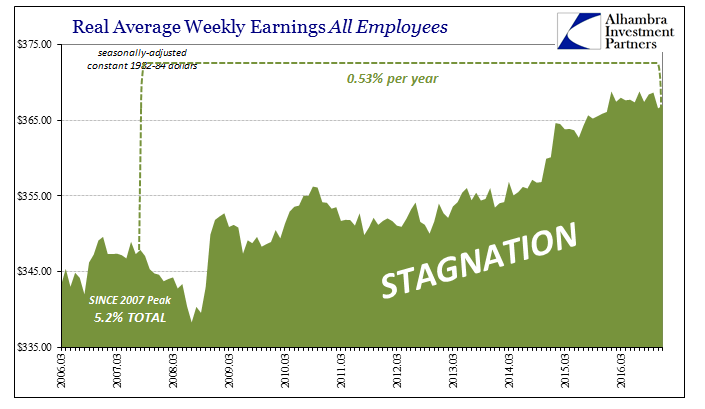 There is so much positivity in the fact that some American official apart from Senator Sanders has finally expressed reality.  It is that statement more than any other political disagreement about a great many other things that got Trump elected. And it is the President’s response to that statement that will either be his path to easy re-election, as Reagan’s in 1984, or yet another signpost on the road to nowhere already heavily populated by statements of politicians like Barroso. Again, taking square aim at regulations and Obamacare are unqualified positives, efforts that would need to be undertaken no matter what, but they are not nearly enough to address the simple truth contained within Mnuchin’s political statement for the simple reason that the plight of the average American worker is not unique to the American worker. The problem is bigger than any single country or even collection of countries. Economics (capital “E”) has screwed over so much of the world. 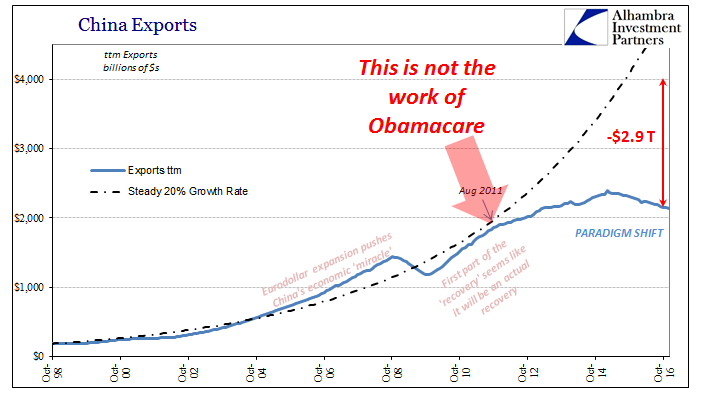 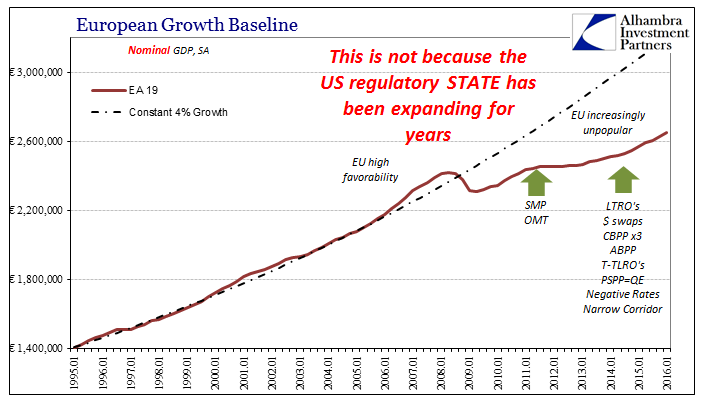 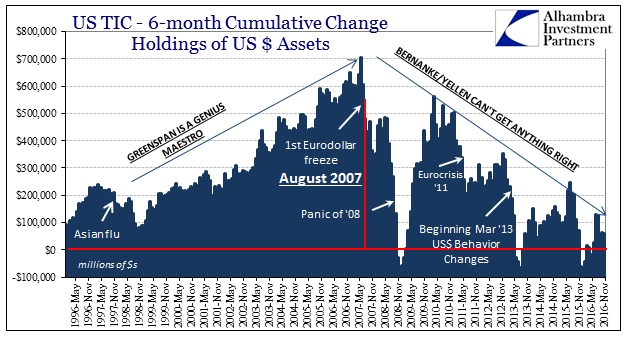 The year 2012 is a great place to start; the Great “Recession” can get lost in a muddied picture of a number of plausible and interchanging factors (though I believe it exceedingly simply, starting from August 9, 2007), but the 2012 slowdown as a global event isn’t so distracted. If, however, the only answer you take from that review is “Obama”, then there just isn’t enough seriousness let alone depth to be so optimistic about reflation let alone actual recovery. It will mean nothing has really changed except the label applied to “solutions” that will still, infuriatingly, deserve quotation marks.

This isn’t about Democrats or Republicans, as they both have equally soiled hands. Nor is it the US vs. Europe, China vs. Japan, or wherever vs. wherever; there is only one global factor capable of linking all of it together. Regulations and Obamacare cannot be the end of it; they must be only the beginning. We cannot become further divided, and I mean that not in some hippie convention of holding hands and embracing our “shared” “humanity.” The world has a global money problem that can only be solved by recognizing, apart from Economics, our common interests in an actual monetary solution.

The biggest danger right now is not a prospective trade war or anti- “free trade” programs, but instead that the new Trump policies of reducing regulation and repealing Obamacare might be so enthralling as to totally unwind what little urgency the “global turmoil” of the past few years finally instilled. With central banks having essentially surrendered, and their credibility at a low, now is the best time to finally get at the root cause. If, however, “fiscal” priorities are to be the preferred outcome to the point of exclusion, then it will be exactly the same as 2013 when US QE3 (and 4), Chinese “stimulus”, massive ECB monetary expansion, etc., were all received in that same optimistic fashion, and every single one of them came to nothing for the same reason. This is not really a plea for unity so much as it is a plea for uniform, widespread non-partisan sanity.