Even The Adoption of Innovation Is Different

Even The Adoption of Innovation Is Different

As with all innovation, the roots of any specific trend usually cast back a very long time. In terms of Enterprise computing solutions, Software as a Service (SaaS) dates to the earliest days of the internet. In the middle 1990’s Application Service Providers started popping up, but they were largely erased in the dot-com bust (not without good reason). For the longest time investor disdain for the idea in any form prevented a better marriage of what businesses really wanted out of IT with what was possible as being deliverable – the balance of efficiency with risk.

Throughout most of the 21st century, on-premise was the deciding factor hardware as well as software in being able to control risk at the expense of efficiency. These were legitimate concerns, of course, including and especially security but not exclusively so. Enterprise control is still today in many ways the overriding factor. What may have been changed is how IT vendors have been enabled to offer different products and ideas to allow better control but with SaaS efficiencies.

As this article written for ComputerWorld in June 2004 claims, it was ironically the dot-com bust and the recession that followed it that planted the seeds for transition toward this model:

As the effects of the stalled economy swept over enterprises at the beginning of this decade, resource-challenged IT departments, out of necessity, creatively looked for new models to reduce the internal work docket. IT departments began thinking pragmatically in terms of business processes and workflow that needed to be accomplished and not of the purchase of discrete applications. As a result, enterprises became receptive to business models that would reduce software maintenance costs and move not only applications and transactions but also complete business processes outside of the enterprise to increase efficiency and lower costs.

SaaS has not solved all the problems with the operating model, but starting around 2012 that no longer seemed to matter as much. Like the early 2000’s, cost became more important in striking the IT balance, only now to the point that in many ways it appears to be the only consideration. Better to save money under SaaS and worry about security holes and potential outages than to elicit the ire of upper management who without revenue growth can only give out directives further squeezing IT budgets and overall cost efficiencies.

No technological shift occurs free of those on the losing end, and so IBM has been the primary candidate for the often barbaric nature of competition in this format. To exercise Enterprise control used to mean a business would buy upfront the hardware as well as the software. Under SaaS, IBM can sell hardware increasingly only to other SaaS providers, forcing IBM to transition itself while its customers do the same.

In the recently released fourth quarter earnings estimates, IBM reports yet another negative quarter for revenue. In Q3 2016, revenues were so close to being flat in what was thought at the time to be perhaps the last of the topline minus signs. Instead, sales for the whole company (GAAP) fell 1.4% from Q4 2015, the 19th straight quarterly contraction in revenue. Even without the “strong dollar” as much weighing on results last year, it is the those 19 quarters that draws our attention as a measure of transformation, but more so the reasons for it. 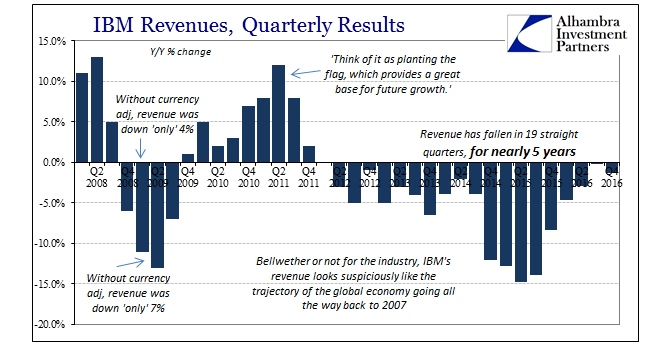 There are many who believe that IBM no longer matters, a dinosaur that has no place in the mobile world of the cloud (despite IBM largely offsetting lost revenue in hardware with rapid growth in SaaS like its own cloud platform, becoming one of the biggest players in that trend finally). My own view has been that IBM was, regardless of industry changes, a macro warning because of them, very much in the same manner as “brick and mortar” stores were in the sudden sharp turn toward online shopping last year. When IBM’s sales started falling in the middle of 2012 (first clue), it was a negative sign that businesses were being pressured by the failed recovery to move up SaaS regardless of still open questions about it; when Department Stores saw their sales drop off dramatically last year it was notice that consumers had finally felt the same extremes finally filter out through labor market realizations of the same processes so as to finally let go of similar reservations in the form of shopping without tangible touch.

IBM’s revenue in Q4 2011 was $29.5 billion; in Q4 2016, it was $21.8 billion, an astonishing 26% decline across five years. IBM’s misfortune is the global economy’s, though to a degree that is all its own. What is truly relevant about that downturn is not that it may finally be ending or at least flattening out, but that like almost everything else it hasn’t shifted robustly in the positive direction even as it gets strung out quarter after quarter. Like online sales growth that isn’t enough to offset customers withdrawing from Department Stores, SaaS and cloud at IBM still aren’t enough to overcome the overriding drag of the same bad economy.

You would think five years would be enough time to pull out if it, but like the global economy post-Great “Recession” IBM appears to have permanently shrunk. Big Blue is therefore a metaphor for the global economy and its potential even when factoring innovation. These industry changes don’t appear accretive or contributory, but rather redistribution as a matter of necessity.  There’s a big difference.