Most of the trade publications in the energy industry continue to talk about “strong demand” for energy products, including gasoline. They, in fact, never actually stopped using the description even though the global economy came perilously close to recession conditions in the second half of 2015. It became common from trade groups to point out that usage last year hit a record high, but that is true of almost every year, so it is a meaningless phrase.

Despite “reflation” that has gripped almost every market, where it has been less evident is in the more important commodities. Copper, for example, has rebounded to around $2.70 from a low just less than $2.00 about a year ago. That only sounds impressive outside of the wider context of copper’s multi-year trajectory, which just so happens to match that of global “dollar” conditions. 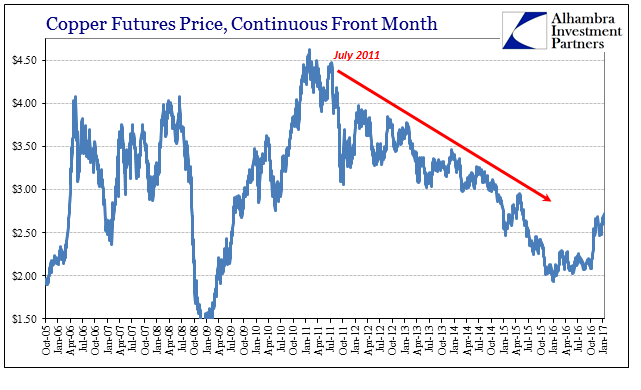 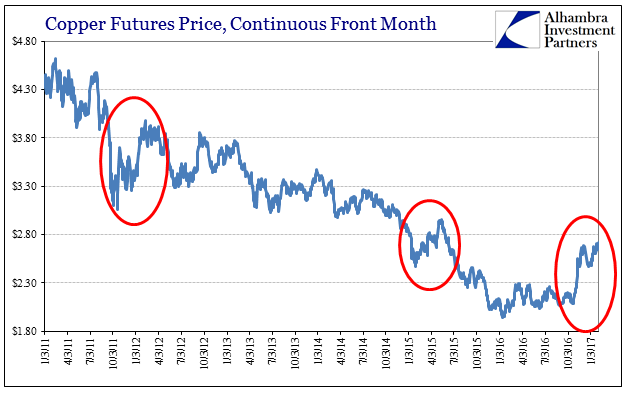 Similarly in oil, after nearly three years of a so-called supply glut (because of strong demand, of course) there is still no progress toward normalization of inventories. Therefore, there is and likely will continue to be a hard limit on the “reflation” in terms of oil prices, which is a significant component of what reflation is supposed to be. 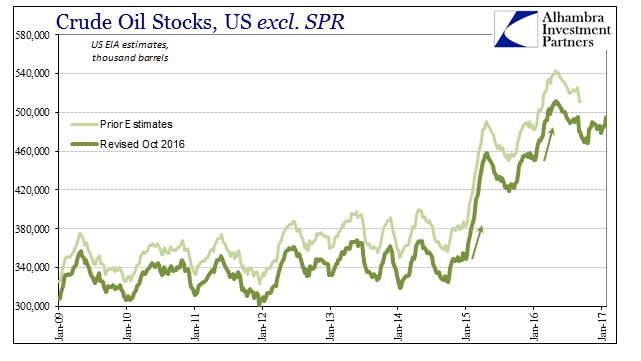 Downstream of oil in the gasoline space, inventories continue to rise well above seasonal expectations. Over the past twelve weeks since the start of November, the US EIA estimates that gasoline inventories have risen by about 36.1 million barrels. That is less than the same weeks in 2015-16, where inventories during what was a sharp global economic slowdown grew by 41.2 million barrels. The change in gasoline inventories during prior years was significantly less than either of those; +24.4 million 2013-14; +29.9 million 2012-13. That would suggest that so far in 2017 conditions of either supply or demand (or both) of gasoline is far too much like 2016 than 2013. 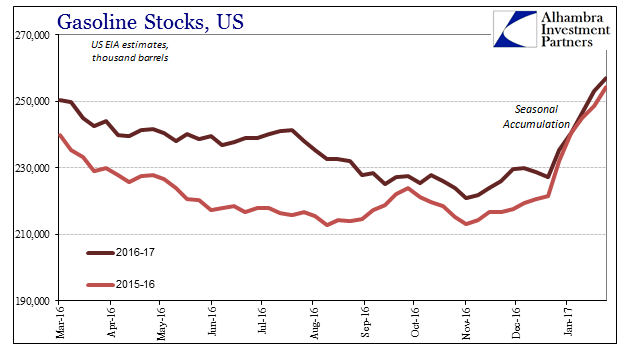 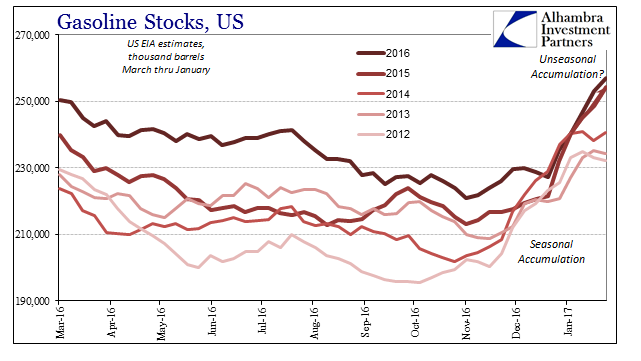 High levels of inventory were attributed at mid-year 2016 primarily to unusually high crack spreads. The US EAI reported at the end of July 2016:

Refineries in the United States, Europe, and Asia all increased production of gasoline compared with distillate to take advantage of the high gasoline crack spreads in 2015 and early 2016. Refineries have some ability to gradually adjust petroleum product yields in response to changes in product prices by adding additional equipment or modifying processes and feedstocks…

Based on projections for U.S. gasoline and distillate production in the July STEO, the U.S. gasoline-to-distillate production ratio is expected to remain elevated through the summer, which could keep inventory levels high and put further downward pressure on domestic gasoline crack spreads for next few months. Trade press reports suggest that some Asian refineries will not increase refinery runs through the summer, running counter to that region’s seasonal trend, because of high inventories and low cracks spreads. How gasoline crack spreads evolve through the second half of 2016 will depend on if and how refineries respond to lower gasoline crack spreads, whether by changing their output mix or reducing refinery runs.

The Asian refineries did reduce their runs through the second half of last year, but clearly US installations did not. At the end of November, the US EIA estimated that crack spreads remained highly elevated:

High gasoline crack spreads, the difference in value between a gallon of gasoline and a gallon of crude oil, have encouraged continued high utilization of U.S. refining capacity. The fall refinery maintenance season had less down-time compared with last year, helping to further drive high levels of production and inventory…

Crack spreads in the U.S. have remained relatively high despite a typical seasonal decrease. The New York Reformulated Blendstock for Oxygenate Blending (RBOB) to Brent crack spread dropped from 47 cents per gallon on November 1 to 25 cents per gallon on November 18. While rapid, this decline is common around the November timeframe and, relative to recent years, crack spreads remain high for the season, providing incentive for refineries to run.

This is not the first time this has happened, of course, but it is somewhat reminiscent of the particular episode of early 2013. Crack spreads to start that year rose sharply, far surpassing the relatively modest rise in oil prices. The reasons spreads might rise or remain high aren’t easy to determine, except in the cases where a refinery or other facility experiences an outage. The 2013 experience, where gasoline prices jumped to a painful average of $3.78 per gallon during what was also a near-recession, seemed to be incongruous given oil prices as well as the economic climate. As the Wall Street Journal reported then:

Regular gas costs more than $4 per gallon in Hawaii, California, Washington D.C. and New York, which may not surprise many people because prices tend to be significantly above average in these areas. However, premium fuel is above the $4 mark in 23 stated plus the District of Columbia, according to the AAA Daily Fuel Gauge Report.

Why so high, especially considering prices tend to be lower during winter?

The rise is partly the result of higher crude oil prices. But the main culprit is an increase in what fuel industry insiders call the crack spread, or the difference between the wholesale price of gasoline and the price of crude oil, said the U.S. Energy Information Administration.

Since the crack spread is the wholesale price of gasoline above the wholesale price of oil, there was clearly a sense that demand for gas would outstrip demand for oil. Then, like now, it was believed that the overall economy, particularly consumer spending, was about to become robust, sharply accelerating in the close aftermath of QE3 (and 4). Like manufacturing PMI’s, there was a “sentiment premium” that in review was so clearly unjustified, but was dubious to begin with.

From that basis for comparison, crack spreads remaining high throughout this “reflation” period might make some sense normalized to these sorts of expectations. Refineries are essentially inviting energy flow to gasoline in anticipation that consumers will buy it, and buy a lot of it (given the record high starting point of inventory). Like the rest of “reflation”, however, that remains all in the future rather than as current reality. And so, like the near-recession conditions of last year, all that gasoline goes into storage awaiting either the expected robust economic rebound, or the “unexpected” if regular disappointment and all the adjustments that must follow, including much less oil being diverted from current storage into gasoline refineries and inventory.

The oil market as a whole remains, to my view, hedged far more to the latter possibility no matter how much wholesale gasoline prices might diverge. 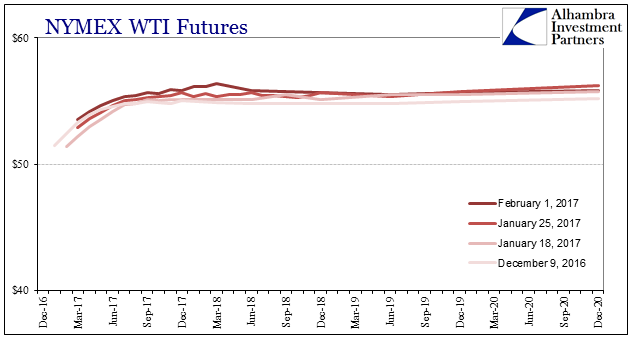