The payroll reports are most often assigned a level of credibility that strains credibility. As if written in stone delivered from the infallible, they are the economic stats that most people pay attention to and from where they derive most of their views on the economy. This isn’t without some good reason, as in prior economic periods there was a very good correlation between the various payroll reports and all the rest of the economic data. If the unemployment rate was low, it wasn’t at all surprising to find almost all other estimates corroborating that view. In other words, the BLS data had become shorthand for everything else.

In reality, the payroll reports are statistical monstrosities, a Frankenstein’s monster of so many different regressions, normalizations (trend-cycle), and benchmarking. The benchmarking process is supposed to create more robust data, and that can be the case, but it can also make a further mess of things. When I write that I believe (still) that the BLS overstated the employment figures especially in 2014, it is often met with disbelief (especially from the media) as if that were ever possible. The payroll report for January 2017 was an almost perfect storm exemplifying all these weaknesses hidden in plain sight.

To start with, 660,000 potential workers disappeared last month. The BLS draws upon Census Bureau population statistics which are, outside the decennial Census, like everything else statistical models of survey results, and therefore require periodic adjustments to correct “errors” (which are themselves statistical models). For January 2017, the BLS reports that a large population adjustment was made indicating that the Census Bureau overestimated the Civilian Non-Institutional Population during 2016. We don’t know by how much or in what particular months, all we know is that in keeping with standard policy the BLS created a discontinuity in the population data that filters into all the Household Series. 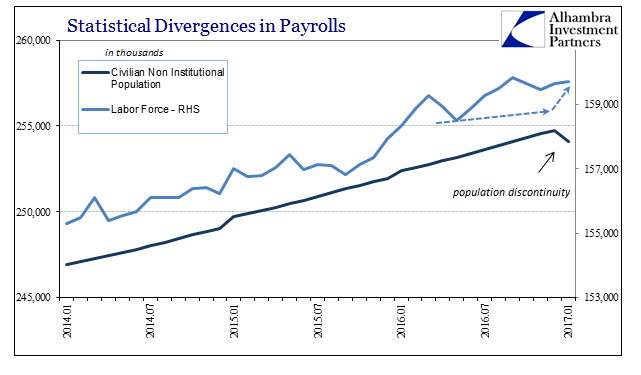 The data series for the official Labor Force, for example, shows a net change of just 76k in January, another seemingly paltry advance belying the mainstream idea of a “strong” labor market. The new population figures, however, lead the BLS models to suggest that the gain in January was instead 584k, and that their estimates for 2016 were in some way cumulatively about 500k lower. 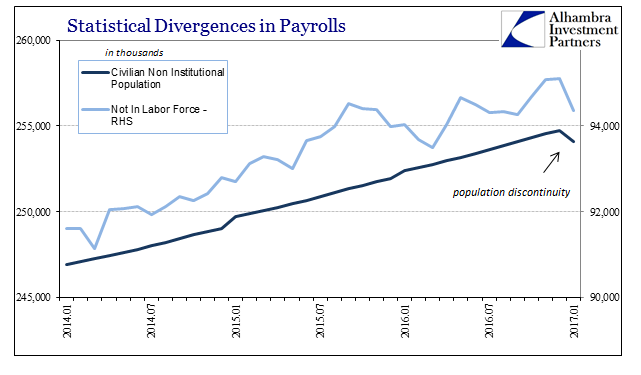 In terms of those continuing to be outside the labor force, the break in the data creates a January estimate that is 736k less than December, but leaving questions about what December might actually have been. The fact of the discontinuity means that the BLS has not adjusted, nor will it, all prior data to these new benchmarks, and therefore it is something that we need to be mindful of when comparing 2017 figures to 2016 and prior (just as discontinuities in other years are an ever-present issue).

There aren’t discontinuities in the CES version of the payroll report, even where benchmark revisions are added, as they will be in March 2017 as every March. The BLS updates annual employment figures to each state’s unemployment insurance tax records. This is not as it may seem a tabulation of every single employed person reported by businesses counting their employees and paying the tax on having employed them, rather it is simply another statistical effort created to help the other statistical efforts become more accurate (in theory) by grounding them in a separate data source (but still subject to the same possible biases). 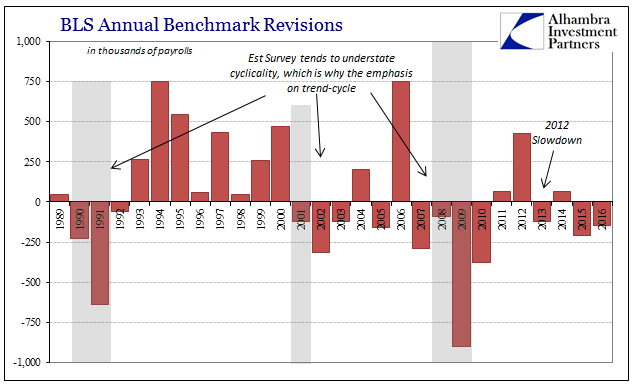 The preliminary net revision for 2016 is expected to be -150k Total Nonfarm, and -224k Total Private (a subset of Total Nonfarm). It isn’t completely uniform, and the revisions aren’t usually very large, but the pattern suggested is where the Establishment Survey itself tends to be perhaps more stable than it should be. In the 1990’s, for instance, the annual revisions were larger and almost always positive, meaning that in each prior year the BLS understated the growth of employment, or at least it now believes after statistically examining state UI records. Conversely, in years after the dot-com recession (as well as the recessions themselves) there appears to be an almost structural impulse to overstate employment gains to some varying degree.

Again, the cumulative amount of what the BLS estimates to have been a bias is small, just 150k for 2016, but that isn’t really my point. It is to highlight what seems an evident bias which in reviewing the manner in which these figures are put together is entirely inherent if almost always before hidden (by design; benchmarking itself is a method of “correcting” some potential bias with some other potential bias, in some ways expecting them to cancel out).

Even the headline payroll estimate is not at all what it seems. For January 2017, the Establishment Survey increased by 227k. That, however, is not the same as claiming the US economy added a relatively sold 227k jobs last month, as will be widely and repeatedly stated, rather the BLS is suggesting that of their survey data if they ran it 100 times in only 90 of them would they expect to find job gains of between 113k and 341k. About the only thing the BLS data says in monthly form is that the interpretation of some level of job gains is statistically significant (because the 90% confidence interval doesn’t cross zero).

The clear fault in the unemployment rate, then, is only partially due to these potential cracks in pulling together so many statistical models. The real problem is the absolute disparity between the numerator and the denominator, which is more likely real than statistical (and thus a great if not the sole source of all these problems). Estimates for that denominator, the official labor force, are subject to the same processes and therefore possibly the same biases, minor or otherwise. And yet, unlike the numerator the labor force estimates have barely budged aside from January’s discontinuity as well as 2015-16 sudden, historically outsized growth I believe almost surely due to SNAP benefits being conditional again on work requirements. 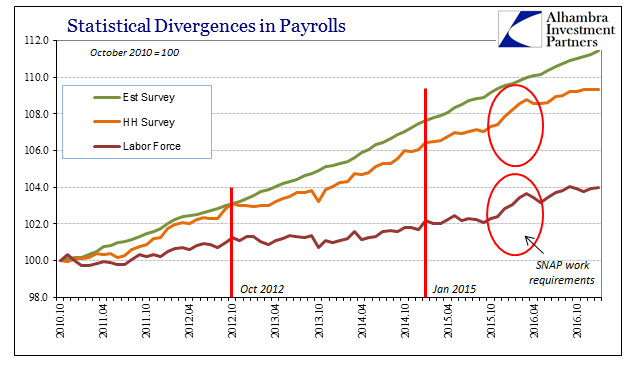 There was another discontinuity in January 2015, where the labor force that month rose by 784k (it was originally reported to be 1.05m). Thus, the total increase in the labor force since the prior “cycle” peak is currently figured to be just 5.65 million despite a population gain of 21.6 million (660k less than December) over the same time. Of that 5.65 million, 3.8 million were added in just the eight months of January 2015, January 2017, and the six months of SNAP.

The whole point of statistical models and the processes built up around them is to make them more accurate and credible. There is much to admire about how these things are done, and very often done very well. The problem is that statistics in general are meant to force data into “normal”, where normal is described by past history. The denominator in the unemployment rate already describes the highly atypical, so the rest is now suddenly quite conspicuous.

In “normal” times these statistical “corrections” also occurred, only we never noticed because there was no reason to notice. The sum total of the statistical processes was to produce data series and data points that made sense in a decidedly non-statistical context. In the late 1990’s, we didn’t need Alan Greenspan to constantly point to the Establishment Survey to remind us the labor market was robust because we all knew that it was, and therefore all the corrections and benchmarking that made up the Establishment Survey numbers remained in the background because the estimates they produced conformed.

Of all the economic accounts, the payroll numbers as well as GDP are those most heavily “edited” and “normalized.” Despite this, however, they can’t hide bigger trends, which is why there is and has been so much confusion surrounding them. Economists like Janet Yellen take the figures at face value because as an Economist she is a statistician far more than an expert on economy. For that reason she ignored those larger trends in favor of Frankenstein. In the case of January 2017, there remain two that are obvious despite all the focus on the monthly (or quarterly) almost meaningless headlines; the first is the break from trend in 2008; the second is slowing 2016 now 2017 relative to 2014 (whatever growth might have been in that year).

The payroll reports aren’t set in stone, nor is difficult to understand why they haven’t been very good shorthand for the economy at large for quite some time. 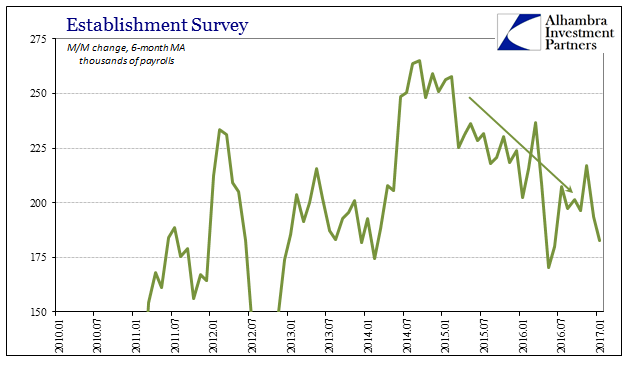 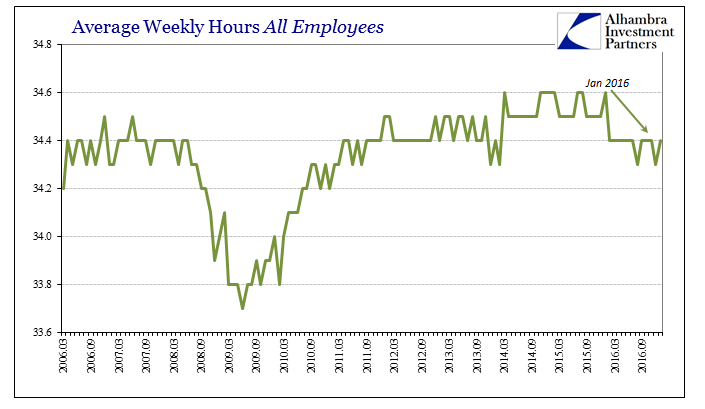 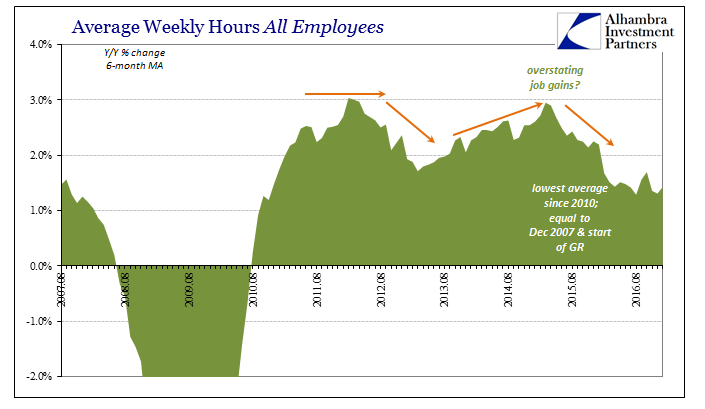