Though we may think of modern economies as being modern and perhaps disassociated with some of the more primitive aspects of the past, there remain to this day seasonal fractures in economy and finance. When the Federal Reserve was created in 1913, for example, its first task was “currency elasticity” which may not have been what we think about as it is today (subscription required).

The Fed was never meant to countermand them, rather its task was simply to reduce the chances that seasonal flows would lead to the worst circumstances. After all, though bank panics and depressions were a relatively new phenomenon in the 19th century, it didn’t take any sophisticated analysis to realize that seasonal flows of gold and currency often played a large role in them. Economic calamity always seemed to strike when the monetary system was at its weakest (October).

Just as the US economy revolves seasonally around Christmas shopping, the Chinese economy gives prominence to the Lunar New Year. With the whole country closed for a full (Golden) week each year, the Chinese central bank undertakes conspicuous liquidity measures to ensure ample currency available to the real economy. Since the holiday itself is not attached to a specific calendar date, there is some variance as to when the PBOC begins and ends those programs. 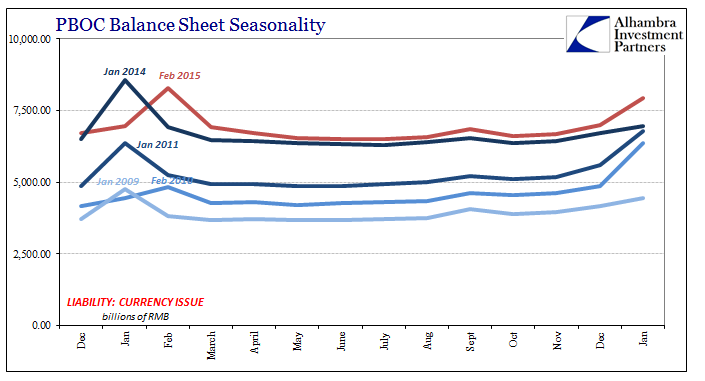 Chinese currency is as US currency, at least dollars rather than “dollars”, a liability of the central bank. To create and float more currency any central bank will either have to expand in assets or redistribute liabilities. For the most part, China’s currency volume surrounding its holidays is and has been a very easy affair. In any given year, it is a flat level with a minor rise in September in anticipation of China’s other Golden Week. The major action is typically January or February, with some years receiving a small anticipatory rise of currency the preceding December.

With more currency in circulation, there is typically reduced demand for bank reserves. In December 2013, for example, the PBOC boosted Chinese bank reserves by nearly RMB 800 billion in preparation for the New Year, which fell on January 31 that year. During January 2014, bank reserves dropped back by more than RMB 400 billion while total currency increased sharply by RMB 2.08 trillion. The PBOC accommodated that large currency supply with an almost as large increase in its total balance sheet size (both currency and asset-side liquidity measure were withdrawn in February 2014).

The process was repeated in 2016-17 with one important difference. There was a large increase in bank reserves in December 2016, this time RMB 1.35 trillion, and also another huge jump in currency in January 2017, RMB 2.19 trillion. The PBOC’s balance sheet, however, did not rise so as to create enough room to accommodate holiday liquidity: it was RMB 34.4 trillion in December increasing only to RMB 34.8 trillion in January. As a result, China’s bank reserves contracted by more than RMB 2.3 trillion last month. 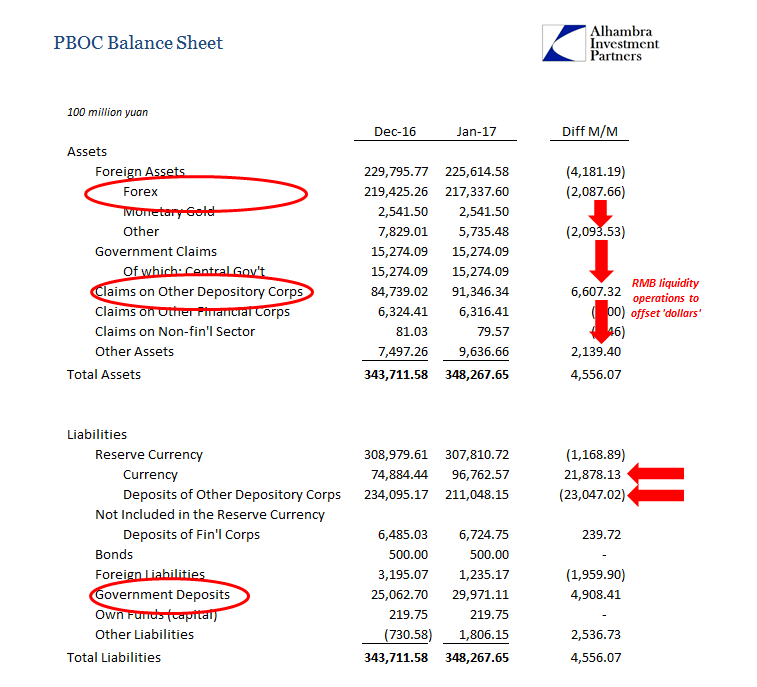 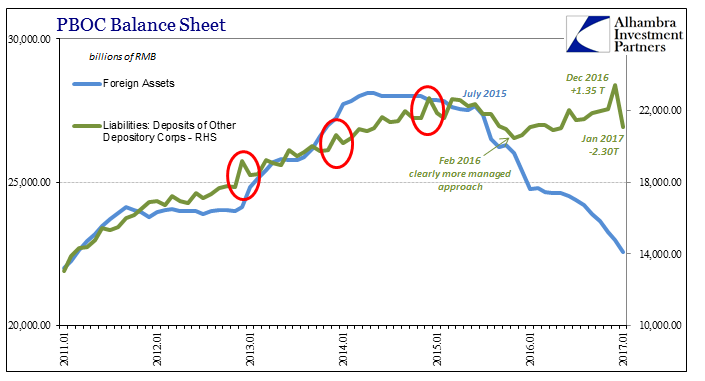 That was an enormous difference, though not for lack of trying, of course, as the PBOC had been almost as busy on the asset side in January as it had been in December. Unlike 2013-14, the PBOC’s balance sheet has been under the constraint of shrinking in its forex basis. Because of that, the nearly RMB 700 billion in liquidity offsets injected in January (Claims on Other Depository Corps) was almost as much as the central bank had done in December (which was a considerable amount). 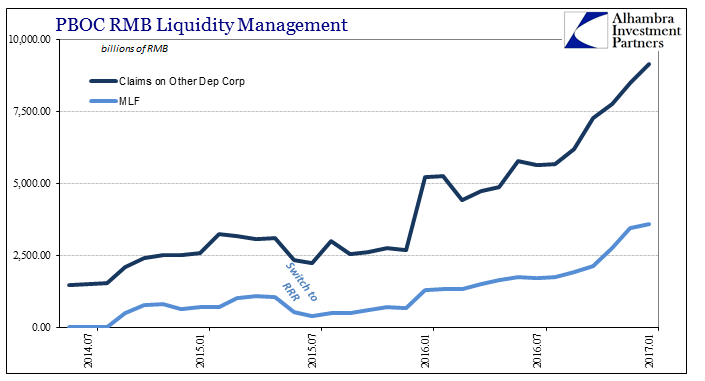 I think that answers the question as to why the PBOC would appeal on a temporary basis to reducing the RRR for larger banks. The de-dollarization of its balance sheet is becoming a significant issue for China, and not just as a means of its currency. 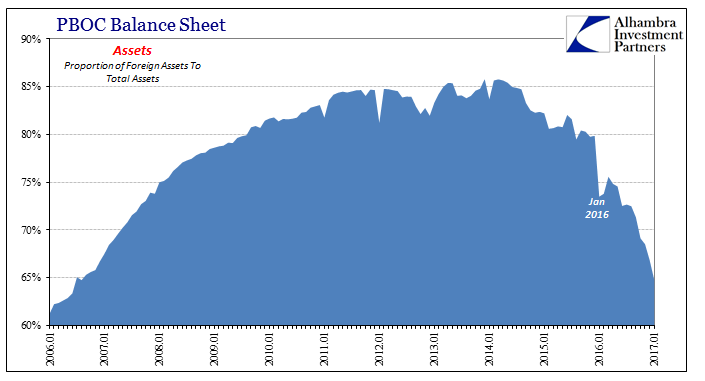 Rather than further strain whatever short-term balance it tried to achieve, the central bank decided to let the banking system itself fill in an RMB funding gap created by the “dollar” funding gap the PBOC is increasingly inhibited by. One need only review Chinese money markets in January and still in February to see how much they have been undermined by the central bank’s absence in this regard (especially repo). 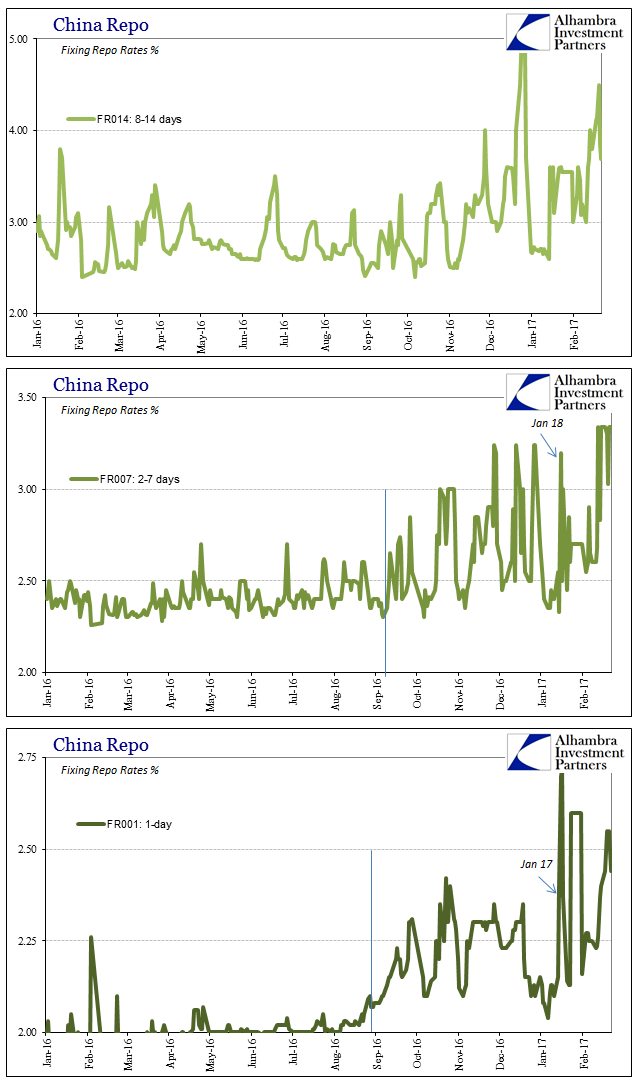 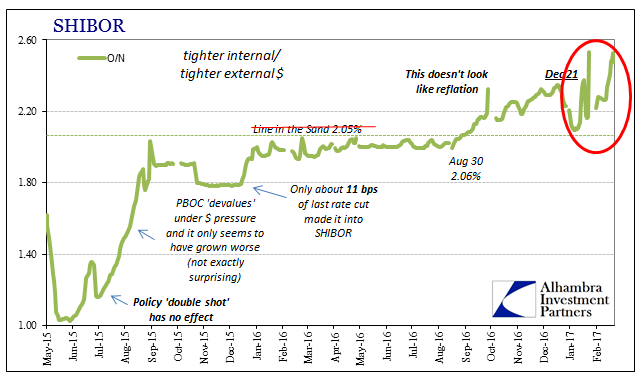 That leaves two important pieces to be further evaluated. First, there is no obvious reason why the PBOC injected so much currency to begin with. The only other years even close to what was added in January 2017 were, again, January 2014, and also January 2011. 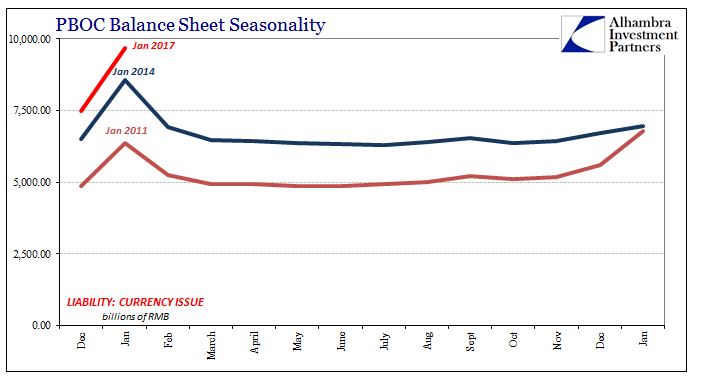 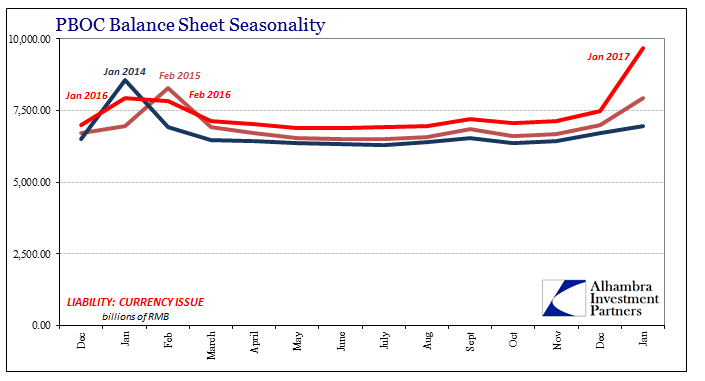 The second unresolved matter is why Chinese money market strain has continued so far into February. The holiday case last year in 2016 was already unusual in that currency was held high over both January and February.  It is not lost on our analysis the (global) conditions of those months. We will have to wait for the PBOC’s February 2017 statistics in order to possibly identify any ongoing shortfalls, hopefully to where the updated balance sheet may shed some light on the first question. But even without this month’s figures we can easily anticipate the issue about the second. It is the same one as has been plaguing China for several years now, one that is becoming more acute as a matter of clear balance sheet restraint.

Seasonal flows are seasonal flows, on the other hand, no less structural in good times as bad. The difference is that in good times we don’t notice them whether we think that successful monetary policy or not. In the bad times we do, igniting a debate that I think would be better served were it not localized to monetary policy exclusively. By doing that, it makes it seem as if there is nothing a central bank can’t do, and if it isn’t doing it at the moment then it just needs to figure out what the right thing is given enough time.

If we take a different perspective of seasonality, however, we might instead realize that what reveals it in the bad times has little do with central banks at all, and so we might begin to think that we notice these things because there are larger forces than central banks. And if we are forced to note seasonality one year, and then forced to note its larger submission the very next, we could begin to recognize the sort of feebleness of artificial intervention across that whole space.

In the context of the specific problems with January and the regular seasonality of the Golden Week, there appears to have been (and likely remains) a hard limit to how quickly or intensely the PBOC might or even could de-dollarize. As an academic exercise, there may seem no applicable limit in that regard, as Chinese monetary officials could in theory “print” as much liabilities as needed in whatever format is needed (bank reserves). That they didn’t doesn’t propose unintelligence or lack of awareness, it instead demonstrates trade-offs that occur with any program of any size.

For the PBOC, the question seems to be how much internal illiquidity they might tolerate so as to not further destabilize China’s already precarious monetary situation. What we have observed in Chinese money markets all the way to the end of February shows clear evidence of PBOC priorities, and therefore the constraining factors (really factor, singular) governing them. 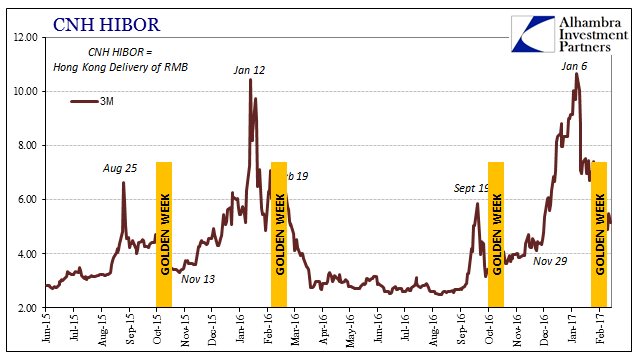