China And Reserves, A Straightforward Process Unnecessarily Made Into A Riddle

China And Reserves, A Straightforward Process Unnecessarily Made Into A Riddle

The fact that China reported a small increase in official “reserves” for February 2017 is one of the least surprising results in all of finance. The gamma of those reserves is as predictable as the ticking clock of CNY, in no small part because what is behind the changes in those balances are the gears that lie behind face of the forex timepiece. Yet, each and every time the delta pushes positive there is the same analysis as if anyone was prevented from reviewing the history so as to very easily see the regularity by which all this happens. 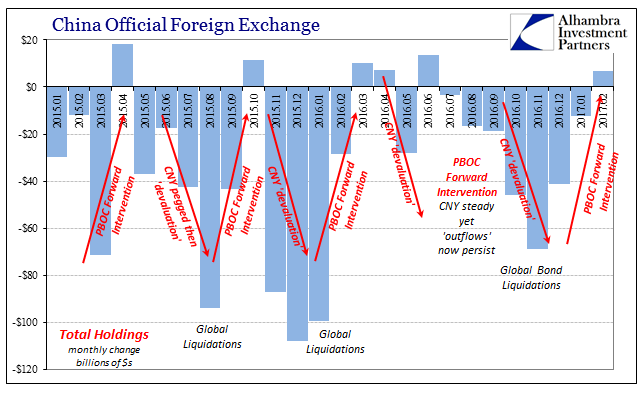 China’s foreign-exchange reserves rose last month for the first time in eight months due to Beijing’s concerted effort to stanch capital outflows as well as valuation changes in the stockpile’s assets.

That is almost always the interpretation, when reserves flash positive (and not even positive but also a lower negative) it must be due to the skill and precision of China’s much admired central bankers. From CNBC:

China has tightened rules on moving capital outside the country in recent months as it seeks to support the yuan currency and stem a slide in its foreign exchange reserves.

I wrote in early October 2015 when China’s assumed “outflows” merely dropped by half from the catastrophic level reached that August that mainstream commentary was setting itself up for this very repeated miscalculation.

In any situation where banks are funding “dollar” positions on a client’s behalf triggers this reserve; the transactions where the client is providing “dollars” to banks are not. Looking at that factor from the bland, orthodox perspective might lead to “curbing the yuan’s depreciation” as a reason for the peculiar arrangement here, while the wholesale view suggests a multi-layered tactic to suppress difficulties within China’s end of the global “dollar” short.

For one, it seems to have worked, at least for the month of September. While China still reported dollar outflows, -$43.26 billion, they were far less than anticipated and less than half of what was reported in the amazing “run” of August (-$93.9 billion). Predictably, that has led already to pronouncements that “it” is “over.”

I even quoted an article written in the Financial Times which stated directly, “the pressure has subsided.” It didn’t, of course, which after a year and a half begs someone to ask the mainstream why they keep running into the same issue of so much of the same bad analysis over and over.

While the FT was in October 2015 claiming the “pressure has subsided” at least one mainstream outlet, Bloomberg, at roughly the same time described at least the means for why it wasn’t.

The People’s Bank of China and local lenders increased their holdings in onshore forwards to $67.9 billion in August, positions that would boost China’s currency against the dollar. The amount is five times more than the average in the first seven months, PBOC data show. The positions are part of a three-stage process to support the currency without immediately draining reserves, according to China Merchants Bank Co. and Goldman Sachs Group Inc.

The problem with doing this is obvious, for if the “dollar” issue isn’t resolved at the maturity of those forwards you have to deliver “dollars” in addition to the contemporary private market demand for them. It’s like adding double demand to some point in the future, an effort you as a central bank undertake because you believe that this FX disruption is temporary. If it’s not, the result is clockwork repetition. 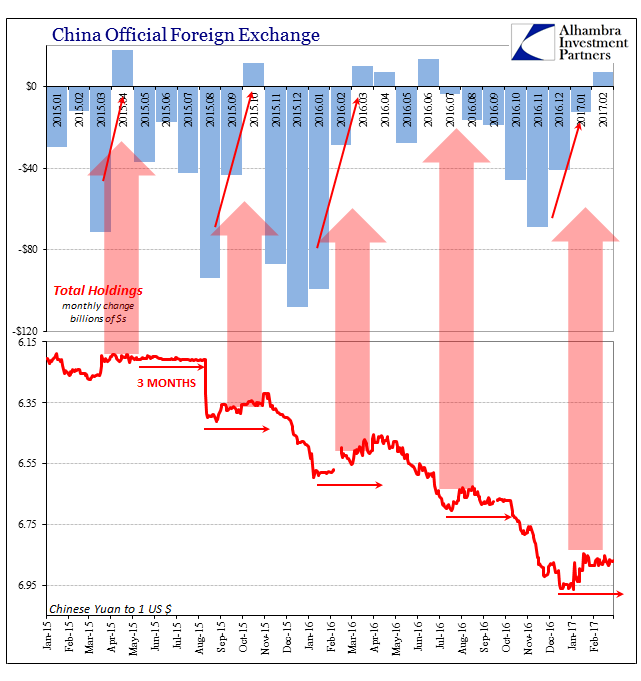 This part is universal and unfortunately not strictly limited to the Chinese experience. I wrote in later October 2015 the stinking familiarity of it all:

In the parlance of what I have used to describe for Brazil, the PBOC like Banco do Brasil enticed Chinese banks already short (synthetically) the “dollar” to become more so – all because they are coaxed into believing, as Yellen, that the central bank will have it covered on the other end. The PBOC’s motivation is only immediate, just hoping that the unwind into the future can be more manageable. What Brazilian banks found was quite the opposite, and Brazil is now suffering greatly for it.

China has more going for it than Brazil, a far better basis with which to absorb repeated and regular monetary blows. Though the difference is in the degree, it is not in the direction. 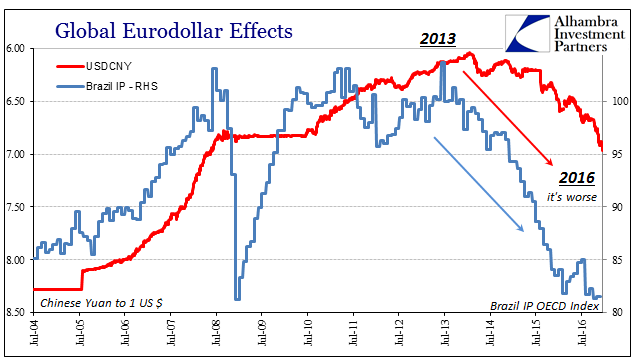 But this is all an old story by now, practically ancient in the fast paced world of “reflation” and “this time is different.” That helps explain why we are subjected to this kind of analysis of China’s situation (from the same CNBC article):

However, expectations of U.S. interest rate hikes beginning as early as next week have rekindled fears that the yuan could come under renewed pressure. The prospect of the yuan depreciating could inflame trade tensions with the U.S. President Donald Trump’s administration.

If CNY starts falling again, and it has the past few days dipped below 6.90 again, it won’t be because of the FOMC voting to increase a money market rate corridor for a money market that nobody uses and a corridor that so often doesn’t apply to anything. It will be instead because of the inability of PBOC ad hoc measures to alleviate a “dollar” problem that just won’t go away, entering now a fourth year for the Chinese to try to handle. 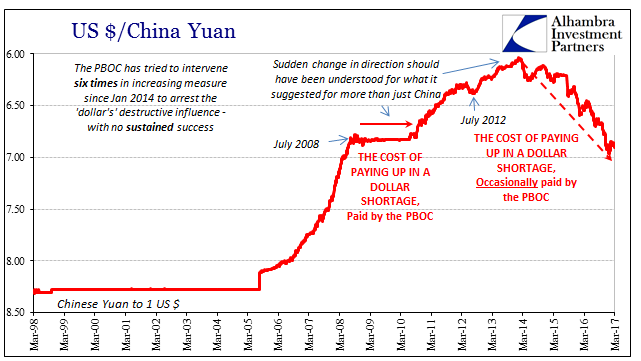