Do Record Debt And Loan Balances Matter? Not Even Slightly

Do Record Debt And Loan Balances Matter? Not Even Slightly

We live in a non-linear world that is almost always described in linear terms. Though Einstein supposedly said compound interest is the most powerful force in the universe, it rarely is appreciated for what the statement really means. And so the idea of record highs or even just positive numbers have been equated with positive outcomes, even though record highs and positive growth rates can be at times still associated with some of the worst. It may seem like a paradox, but that is only because of the linear frame of reference.

The next update for the Financial Accounts of the United States Z1 (formerly Flow of Funds) is scheduled for tomorrow, but in anticipation of it the statistics through Q3 2016 are sufficient to illuminate this big picture discussion. According to them, total debt securities in the US reached a record high $40.93 trillion in Q3. And in Q2 2016, total outstanding loans within the US of $24.30 trillion ($24.59 trillion in Q3 2016) finally surpassed the prior peak set in Q3 2008 ($24.22 trillion). The Federal Reserve must be right that recovery has been achieved through credit?

Without the non-linear context, these figures are highly misleading. Credit growth simply does not equate to anything other than credit growth. We are conditioned to believe that if there are positive numbers especially in places like debt levels (with all these huge numbers well into the tens of trillions) then it must be that things are getting better if not well on the way to full restoration. But if we look at something like debt securities, the difference may seem quite subtle but no less enormous. 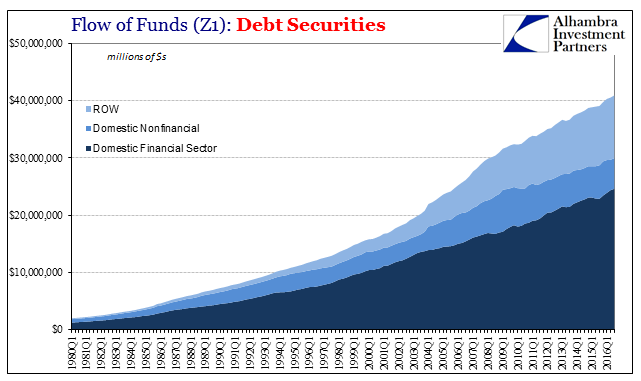 At first glance, there doesn’t appear to be much wrong with the growth of securities; no big contraction during the 2008 panic and certainly not one thereafter. The most you can detect from this linear view is what appears to be a slight change in trend after 2008. If you take it apart further by its constituents, you are left with the impression that it is the Domestic Nonfinancial sector that is responsible for this (and it is to some extent). 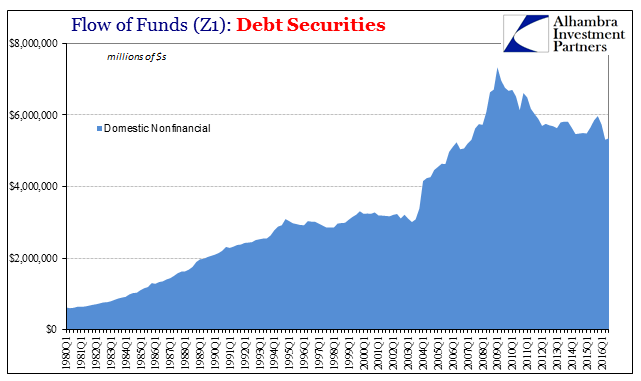 A good deal of that contraction after 2008 is merely different pockets, to where households who held bonds outright prior to 2009 shifted to holding bonds in the form of bond funds (financial sector). From the view of the financial sector, the largest segment, the growth of debt securities have been virtually uninterrupted. There isn’t even much of a shift pre- or post-crisis except in proportion of what securities the financial sector was holding (a topic for a separate discussion). Overall, the level of debt securities has remained more or less constant, leaving us the foreign sector denoted as ROW (rest of world). 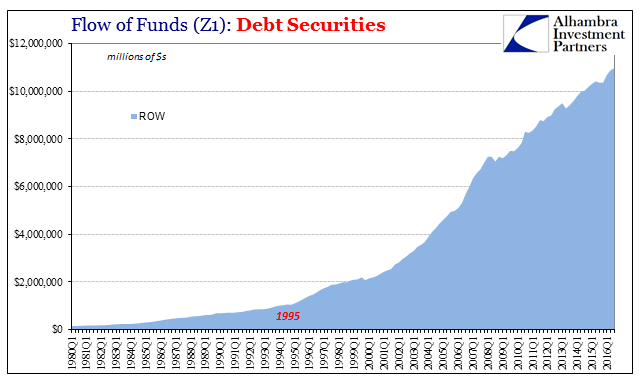 The level of securities held by ROW jumped to nearly $11 trillion in Q3. In 2008, the foreign sector only sold down their holdings significantly in one quarter, Q3 2008. Since that point, ROW holdings have jumped by 56% in recovery. And yet, despite these record numbers and seemingly massive growth this is the very place that all our problems begin. You simply don’t appreciate the massive scale on the chart above, but in non-linear fashion on the one below it is clear just how much has been lost. 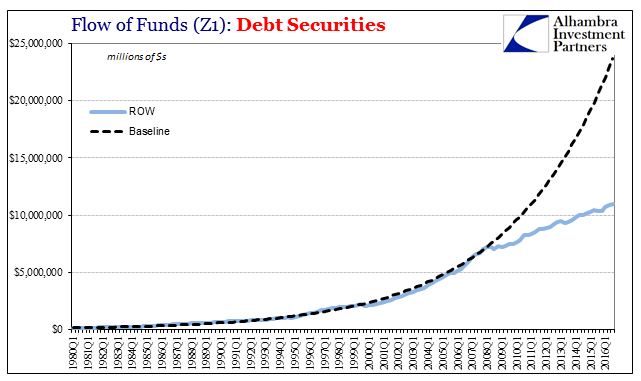 What looked like a minor alteration was in fact a gigantic one. Had the panic been but a temporary disturbance in global financial networks, the level of debt securities held outside the US “should” have been almost $24 trillion in Q3 2016 rather than almost $11 trillion. Thus, 56% growth is so small as to be meaningless. Record highs are nothing but trivia, or mere positive spin.

The ROW sector gains our attention not just because of the massive disparity shown above, but because it was the offshore “dollar” markets that fed this growth. Prior to the 1990’s, eurodollars were primarily a tool for international trade alone. It was a means by which companies in different countries could engage in trade without incurring significant financial costs. Denominating everything in dollars was simple and easy, and for banks doing so offshore was highly efficient so as to pass along fewer monetary frictions to a global trade environment ready for growth.

Around 1995 or so, however, the eurodollar system began to “leak” back inward. Banks outside the US would fund asset positions obtained from within the US. They would use eurodollar sources in order to do what you see above, forming the major part of credit growth inside the US during the housing bubble era (which in full encompassed the dot-com bubble era, too).

Among the debt products these foreign institutions were attracted to were all the “wrong” things. The general category of corporate bonds includes more than just General Electric bonds, as it meant GE Capital debt of all kinds, too. In addition, foreign “dollar” sources were put to heavy use in the MBS market (ABS here refers to GSE and Agency sponsored securities). 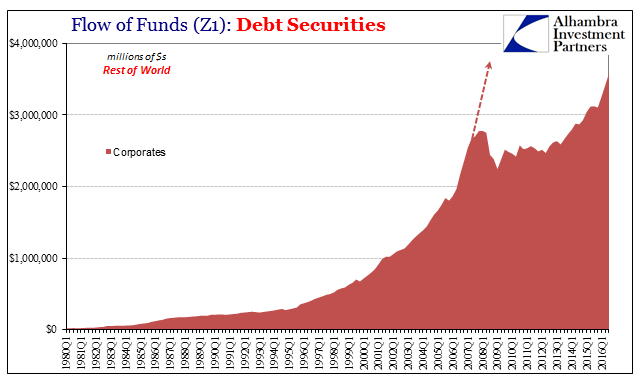 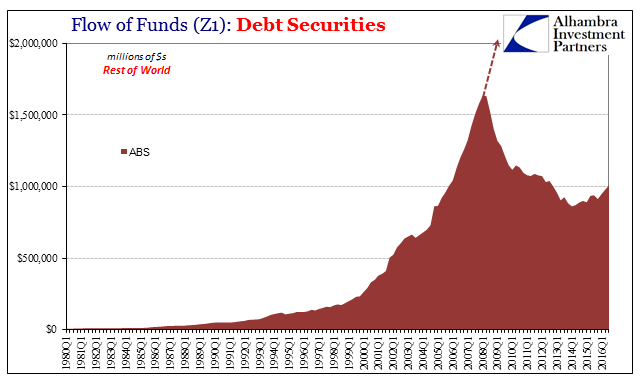 It is only post-crisis where we find drastically shifting preferences toward the US Treasury market (liquidity preferences as well as reduced capacity). 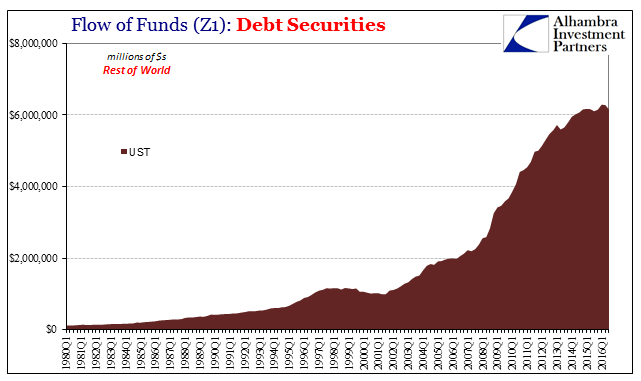 Without the resources of these foreign “dollar” conduits (banks as well as other non-banks), the loan market in especially the non-bank channel was blown apart. It is the mechanism of transference offshore to onshore, money to debt to lending (a foreign entity raises “dollars” in eurodollar markets, buys debt from non-bank conduit like private label ABS, who initiates loans inside the US real economy with US or foreign bank subsidiary resources and warehouse capacity funded by the same eurodollars and wholesale means). 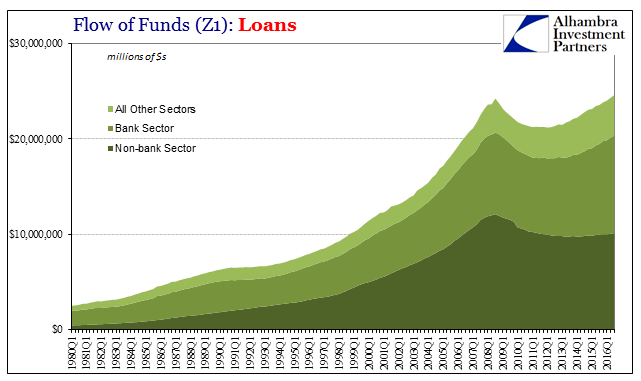 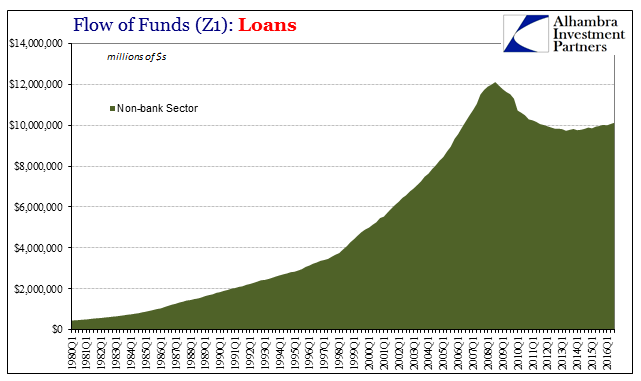 This establishes the connection between foreign “dollars” and domestic loans, and therefore domestic activity (or lack thereof). For our purposes here, I have defined the non-bank segment as mutual funds, GSE’s, official MBS pools, private ABS, and finance companies. In terms of credit distribution, there is a big difference between financial resources flowing at rapid growth rates through the housing bubble channels (home equity as ATM’s) and foreign “dollars” at much lower growth rates being used to buy UST’s.

If we assume a constant correlation between ROW debt holdings and this part of non-bank lending, what we find unsurprisingly in the counterfactual (FWIW) is what would have looked like normal. 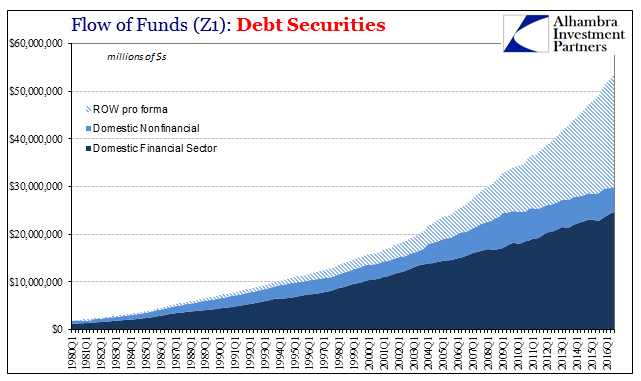 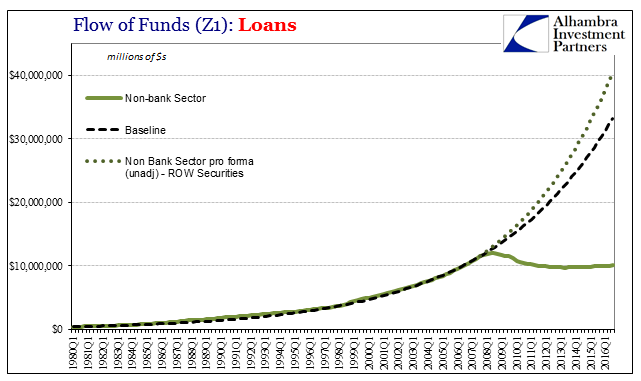 This doesn’t necessarily present a realistic scenario for “what might have been”, rather it establishes the benchmarks for what has been missing despite record high debt levels.

And we can extend this analysis to the economy as a whole, especially as it was financialized from the early 1980’s forward. When I look at GDP, real or nominal, in the US and other places around the world I can’t help but think of the destructive aftermath of what sure looks like a global war. It would normally take some cataclysm to produce these kinds of results, where the economy not only contracts but is actually robbed and defeated of so much potential. Physical and literal destruction is practically the only plausible candidate for what we find almost everywhere. 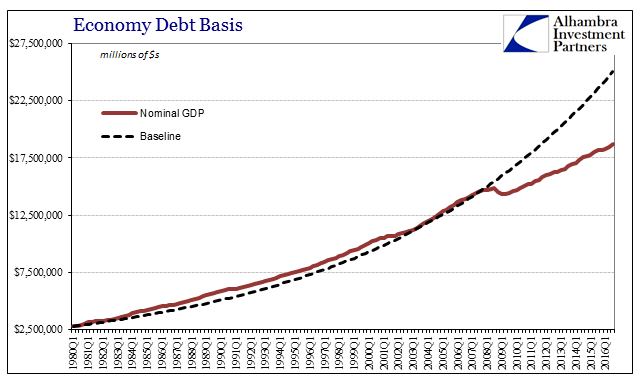 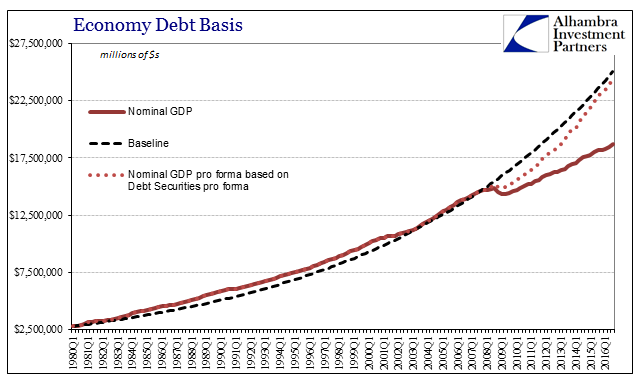 From this you can appreciate why central banks were so unyielding about achieving recovery through bank and money “stimulus.”

This doesn’t tell us that the recovery can be made again from debt and rapid money growth, though, only that what is absent is what was too plentiful from before the rupture. A global economy that became highly financialized cannot sustain itself without the same levels of financial growth. It seems almost absurd to have to write out that sentence, but an apt description of where we are nonetheless.

We seek not to reconstruct what was, but rather to use what could have been as a measuring stick to interpret what there is. The informal, generic chain of causation goes something like this: 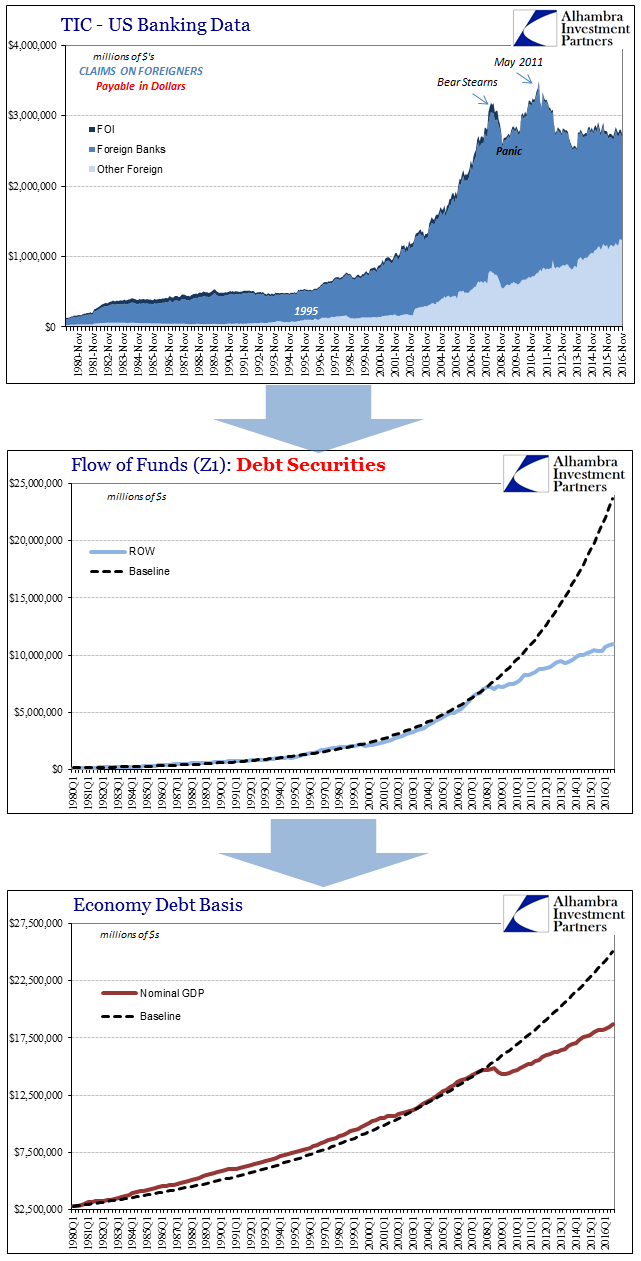 ‘Dollars’ to Debt to Economy. The difference is that we are measuring not positive vs. negative but rather trend vs.off-trend. There is a condition that rests between growth and contraction especially when it comes to money. When Milton Friedman spoke about the interest rate fallacy in the 1960’s, he denoted “tight” money conditions not as merely contraction vs. growth, negative signs vs. plus signs, as he realized that “tight” money could also occur where the money supply was increasing.

What matters is money growth in relation to economic demand for money. If money stock is increasing by 2% but the economy 5%, that is “tight” money even though the money supply is rising and likely to new record levels each time it does. What we have here in “dollars” and debt/credit is something more complex but conceptually the same. The lack of “dollar” growth through all its various channels is a drag on economic function, through debt and other means, which has the effect of creating distortions and further imbalances. The longer it goes on, the deeper and more disturbing these became no matter what record highs are achieved within them.

Judging either money, as the BIS has done recently, or economy in absolute terms is either inappropriate or intentionally misleading. As with debt securities levels held by the rest of the world, there isn’t anything immediately wrong about them except when you change the filter through which you analyze it from linear to non-linear. 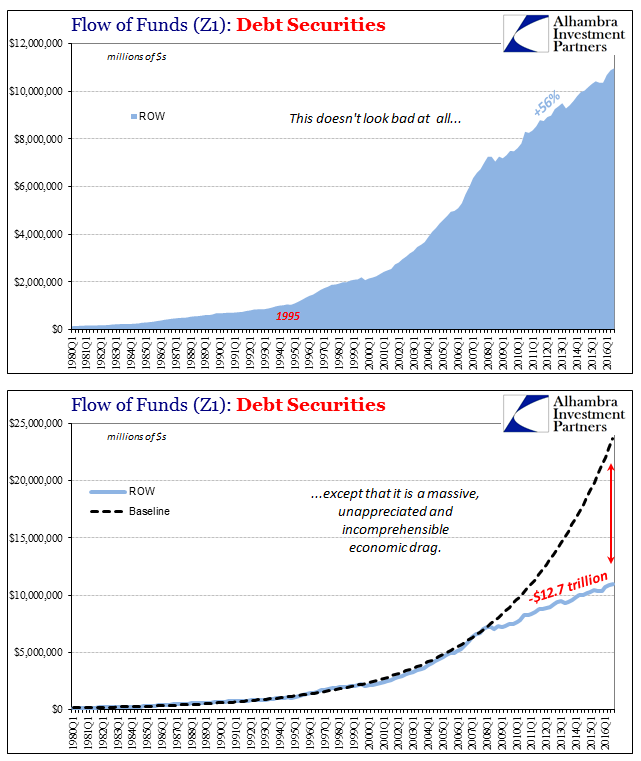 The fact that we can very easily and reasonably surmise cause and effect does not propose that we rebuild the eurodollar system through non-bank channels or banks reborn into robust money dealers, rather it instead recommends and exhibits the very inherent instability that such a system will always concede. In other words, even if it didn’t break in 2007, it would have at some point in time. What should have changed was “our” response to that break; to deal with it honestly rather than ideologically. On that minimal level of progress, we are still waiting.