Chinese trade figures for the month of February 2017 were decidedly mixed. On the import side, total trade rose by 38.1% from February 2016. That latter month, however, was one of the lowest trade figures in years (the first time imports had added up to less than $100 billion in any month going back to February 2010) as it ended up with both the worst of the “rising dollar” conditions as well as holding last year’s Lunar New Year holiday. For January and February combined, imports were 26% higher than the same two months in 2016, but still 16% below January and February 2014. 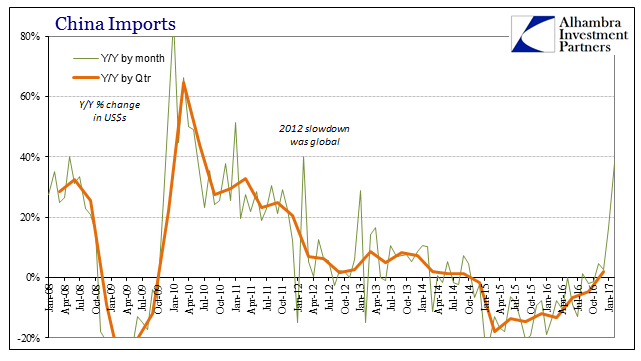 Chinese exports, on the other hand, contracted yet again. Though “analysts” were projecting a 14% gain for the month, exports totaled $124.5 billion, down 1.3% from one of the worst months in China’s statistics. That is why expectations were for a seemingly robust gain, as base effects made it improbable that exports would be lower in February 2017 than in February 2016. Calendar effects being what they were, however, January and February combined this year were up just 4% compared to last year during the worst economic conditions since the depths of the Great “Recession.” 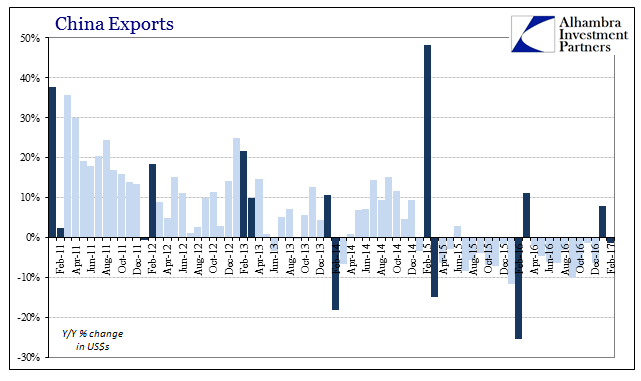 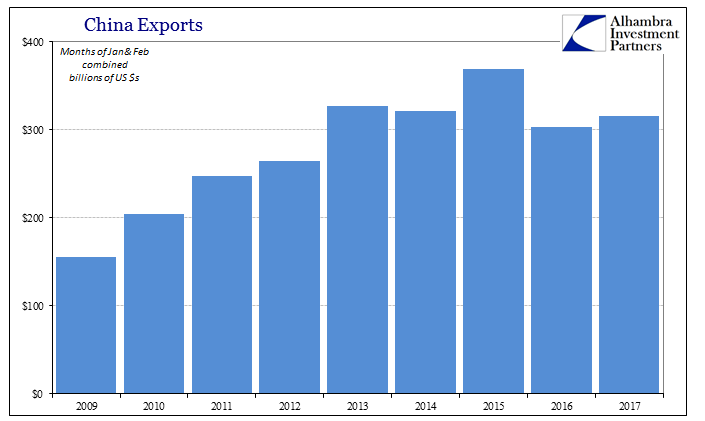 It doesn’t exactly provide the comparisons “reflation” was hoping for, particularly in terms of exports which are the best proxy for global trade and therefore “demand.” As with US trade and its economic accounts, conditions are clearly not getting worse. The contraction appears to have been stopped, but giving way to the same sort of lackluster pace of activity as had prevailed before it started. Even the import figures when placed into the context of the nearly 3 year slump aren’t as cheerful as they appear.

In the first months out of the Great “Recession”, for example, imports stopped contracting in October 2009 and within two months, by that December, they were up 56% year-over-year. In January 2010, with another Golden Week calendar effect similar to 2016’s, imports jumped by 86%. These rates were achieved with conditions that were strikingly similar in China to those of early 2016 – enormous fiscal and monetary “stimulus” introduced during a contraction which at its worst in Chinese trade wasn’t that much greater than at the worst in 2015-16.

Coming out of the dot-recession, China’s imports surged by 64% in January 2003 even though the calendar effects of January 2002 (imports +22%) were unfavorable to that leap. Where in January and February 2002 imports were up just 3.3% combined over the year prior, in 2003 imports during the two holiday months surged by 57% despite no actual contraction during the worst of that slowdown. 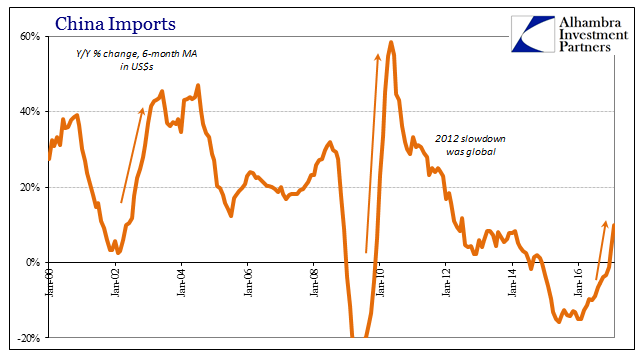 Economic authorities in China appear to grasp this difference, having this past weekend reducing their growth target for GDP as well as employment. Though I consider, like many others, Chinese GDP to be irrelevant in assessing the country’s economic situation (and have begun to question statistics like industrial production and retail sales along the same lines), it is still meaningful that officially the target is being pared back. Were Communist officials confident in the supposedly stabilizing Chinese economy there is little doubt they would have raised it even slightly if there was any plausible way to do so.

More important than GDP, their jobs target was significantly scaled back. The new goal calls for 11 million new jobs created in 2017 compared to the 13 million China’s State Council claims for 2016. These are the best levels that the government feels it can get away with realistically pursuing, so lower again this year is notable.

Those reductions are undoubtedly in response to the lack of appreciable acceleration on the export side. No matter how many times it is claimed that their economy is rebalancing away from industry and exports, manufacturing and trade remain the basis for all of it. The Chinese more than perhaps any other country, including this one, therefore appreciated what was happening in 2014 in a way that economists in any place apparently could not. As I wrote in September of that year:

When the first vestiges of Chinese production deceleration became apparent in early 2014, it seemed very curious to the mainstream because everything about “global growth” was headed in the “right direction.”

…The pace of US imports from China is still about where it was at the worst of the dot-com recession, and about the same as the first two-thirds of the Great Recession. Global growth is a fantasy, only one that is more apparent now in Europe and Japan. The FOMC can make all the statements and proclamations it wants, but China and the rest of the world strongly beg to differ.

So here we are all over again, wondering just how much improvement there is after escaping, as 2012, what could have been something like recession (though, as I often write, in reality we escape nothing because this repetition is far worse than recession). For a standard of comparison, exports from China in Q1 2014 were -3.5% (the Polar Vortex quarter in the US) accelerating to +4.9% Q2 2014 and then +12.9% Q3. Things can still get a whole lot better from here without actually getting better from here.