China Starts 2017 With Chronic, Not Stable And Surely Not ‘Reflation’

China Starts 2017 With Chronic, Not Stable And Surely Not ‘Reflation’

The first major economic data of 2017 from China was highly disappointing to expectations of either stability or hopes for actual acceleration. On all counts for the combined January-February period, the big three statistics missed: Industrial Production was 6.3%, Fixed Asset Investment 8.9%, and Retail Sales just 9.5%. For retail sales, the primary avenue for what is supposed to be a “rebalancing” Chinese economy, that was the lowest growth rate in more than a decade, the first time below 10% since the January-February period in 2006. 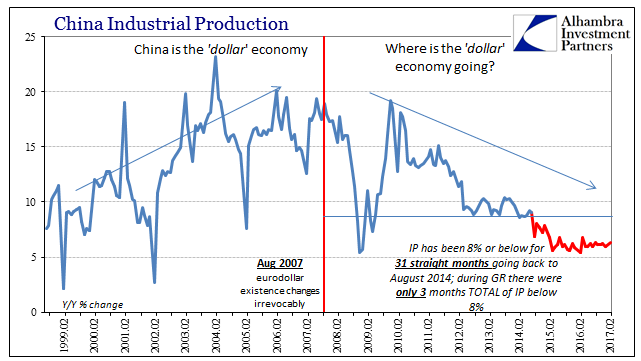 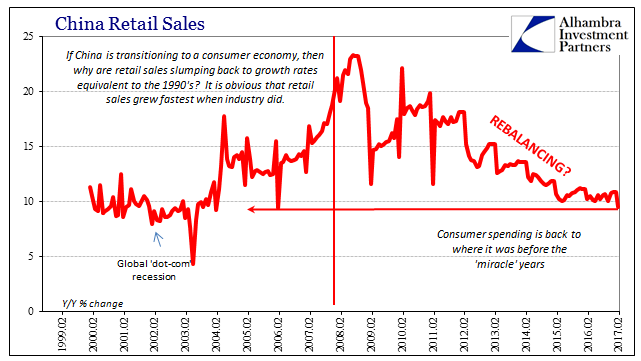 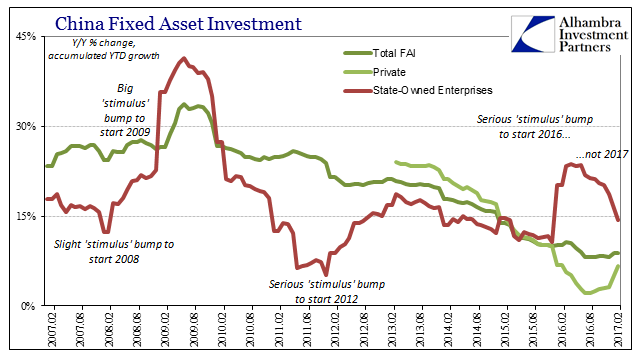 Analysts had been expecting Chinese retail sales to rise either 10.5% or 10.6%, depending on the source collating expectations, meaning that actual sales missed by a wide margin during the holiday period. What was perhaps most noteworthy was the growing dichotomy between online sales and retail sales overall. Virtual sales rose by more than 25% year-over-year, echoing a similar dynamic we have observed in US retail sales since early last year. Consumer prices according to government statistics have been stable (and actually decelerated sharply recently) and therefore different than in the US, so it might not suggest the same oil price effects as here but instead a similar underlying baseline weakness that hasn’t dissipated even though the worst of the “rising dollar” is now a year in the past.

The rest of China’s statistics propose the same assumptions. Industrial production at 6.3% is no different at all than the level of growth it has been for two years now. The noticeable lack of volatility in the changes month-to-month continues to suggest (louder) less reliability, perhaps, than might be hoped for (like China’s GDP estimates). If there were actually some appreciable acceleration in Chinese industry we would expect to see it here, meaning that it is very likely only the downside that might be obscured by an almost perfect and increasingly likely artificial sideways trend.

In the more important FAI estimates, there is clearly some lingering “stimulus” running through China’s State-Owned Enterprises, but nowhere near the scale of what was introduced at the start of last year so as to avoid any further dangerous deterioration during the “global turmoil.” The accumulated growth rate for the private side appears somewhat better in January-February, but the December rate counts for all of 2016, brought down by including the contraction in the middle of last year. Estimating Private FAI by month (year-over-year), the rate of 6.7% to start this year was only slightly higher than the monthly figures over the preceding four months. 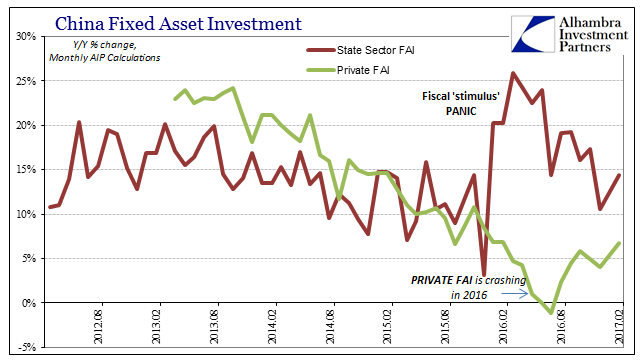 None of this presents last year’s “stimulus”, including a great deal of de-dollarizing RMB monetary policy, in a positive light. It is, after all, not immediately clear that despite enormous intrusion anything at all has changed. Given the relatively dire conditions of one year ago, for no significant improvement to be detectible in China’s economy is actually a more worrisome proposition than how it is being described (“stabilizing”). In my view, stabilizing means growth prospects whereas what we find in China to start 2017 is further concerning weakness. 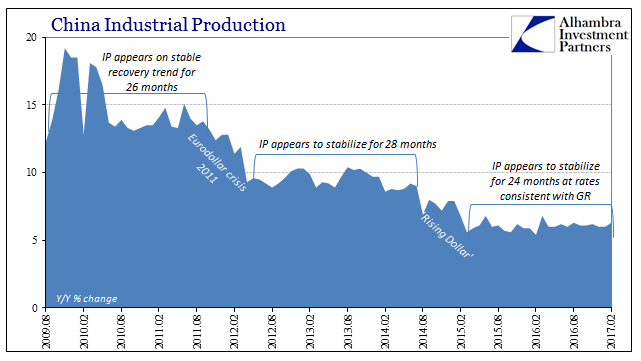 It suggests, obviously, a chronic problem which is surely why Chinese authorities have responded with lower growth and employment targets. As I wrote accompanying China’s external trade figures for February:

Though I consider, like many others, Chinese GDP to be irrelevant in assessing the country’s economic situation (and have begun to question statistics like industrial production and retail sales along the same lines), it is still meaningful that officially the target is being pared back. Were Communist officials confident in the supposedly stabilizing Chinese economy there is little doubt they would have raised it even slightly if there was any plausible way to do so.

More important than GDP, their jobs target was significantly scaled back. The new goal calls for 11 million new jobs created in 2017 compared to the 13 million China’s State Council claims for 2016. These are the best levels that the government feels it can get away with realistically pursuing, so lower again this year is notable.

The combined January-February economic statistics for IP, RS, and FAI are consistent with those official reductions, and do not really indicate stable let alone, as “reflation” would have it, restoration.