Janet Yellen was sworn in as Chairman of the Federal Reserve Board of Governors on February 3, 2014. One of her first acts as Chairman was to participate in the National Interagency Community Reinvestment Conference held in March that year in Chicago. She addressed her audience in a speech specifically directed at the labor market. As was usual in 2014, her focus was “slack.”

It might seem obvious, but the second thing that is needed to help people find jobs…is jobs. No amount of training will be enough if there are not enough jobs to fill. I have mentioned some of the things the Fed does to help communities, but the most important thing we do is to use monetary policy to promote a stronger economy.

The problem for monetary policy, according to monetary policymakers, is to define the level of “enough” jobs. They want the economy to grow and recover but only to the point at which it starts to become inflationary, the natural tension between its dual legal mandates from Congress. The role of “slack” is to define that point, where job growth has transitioned from “not enough” to “just right.”

It may seem quaint now, but at the time the Fed had just started to taper QE3 (MBS) and QE4 (UST), and there were concerns that they were removing “accommodation” perhaps a bit too hastily. The unemployment rate at the time, Yellen pointed out, was still 6.7%.

In this context, recent steps by the Fed to reduce the rate of new securities purchases are not a lessening of this commitment, only a judgment that recent progress in the labor market means our aid for the recovery need not grow as quickly. Earlier this month, the Fed reiterated its overall commitment to maintain extraordinary support for the recovery for some time to come.

That speech was given just about three years ago now. Not too far into our economic past, entire business cycles would complete in just a little more than years. Yet, in March 2017 her message is still embarrassingly the same. At her press conference yesterday, she said:

We think we’re moving along the same course we’ve been on, but it is one that involves gradual tightening in the labor market.

I would describe some measures of wage growth as having moved up some. Some measures haven’t moved up, but there’s is also suggestive of a strengthening labor market.

Gradual tightening? Suggestive? How long does it take? In March 2014 there were signs that slack was diminishing if not nearly diminished enough. In March 2017, there are still signs. This is nothing more than obfuscation of the first order. She is using the unemployment rate as Fed officials have for the last several years, to suggest an economy that cannot and will not be found outside those particular BLS data points. What’s more, she knows it.

That is why the Fed raised rates for a third time yesterday, as it has nothing to do with the continued precarious state of the US economy. Three years post taper is far more than enough to realize that which was once claimed, recovery, is now impossible without something like divine intervention (which would still need to take the form of currency reform to actually be successful). All there will ever be from here on is the “suggestive” about what the public believes of recovery and what Janet Yellen clearly refuses to clear up as to how wrong that expectation is. She’s purposely avoiding the confessional.

To place even further emphasis on this devious divide is recent wage and earnings data that combined with oil prices belie even the “signs” of labor improvement. Nominally, wage and earned income gains continue to be stuck – if they were anything more than that Yellen would not need to emphasize the “suggestive”, she could state it outright and be believed. With oil prices rising, this temporary burst of inflation forces wage statistics back to a negative sign, and a negative commentary on the whole economy as well as “slack.”

According to the BLS, real weekly earnings fell 0.3% year-over-year in February after falling 0.5% in January. Those are the first consecutive monthly declines since the dark days of 2012, pre-QE3. 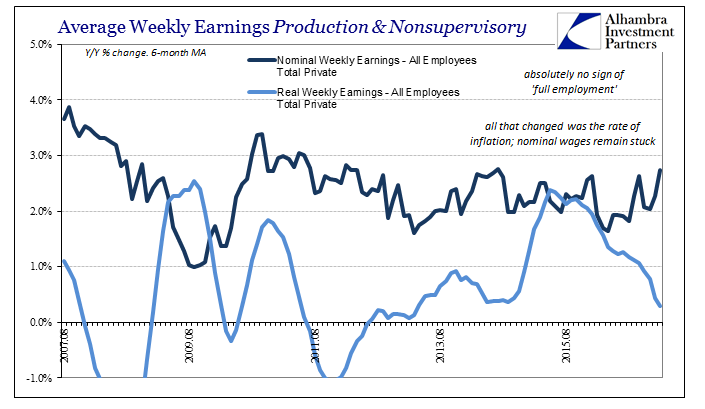 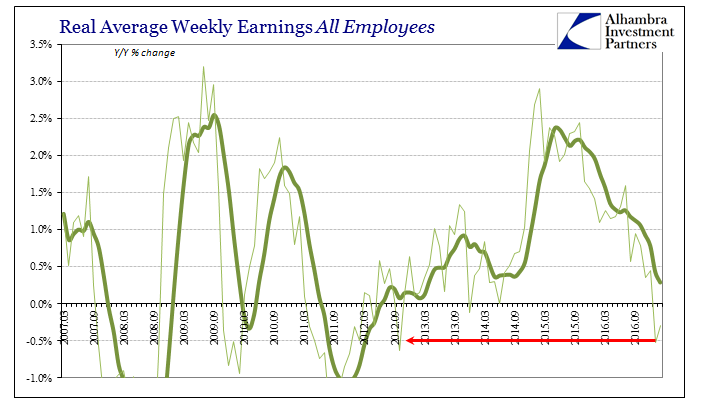 The only significant wage improvement in the past six years was starting in the middle of 2014 when commodity prices especially oil crashed – and that was an indication of just how wrong Fed officials like Yellen were about everything from money to economy. The American people have benefited more from the Fed’s mistakes than its so-called accommodation.

But that was all very minor in the grand scheme of recovery. Real weekly earnings even with that “real” increase in early 2015 have not even kept up with a 1% annual rate of growth – let alone a recovery-like 2% or better. That’s what is truly striking about the past three years and the unemployment rate, the lack of inarguable and explosive growth that shows up coincident to every recovery in history. 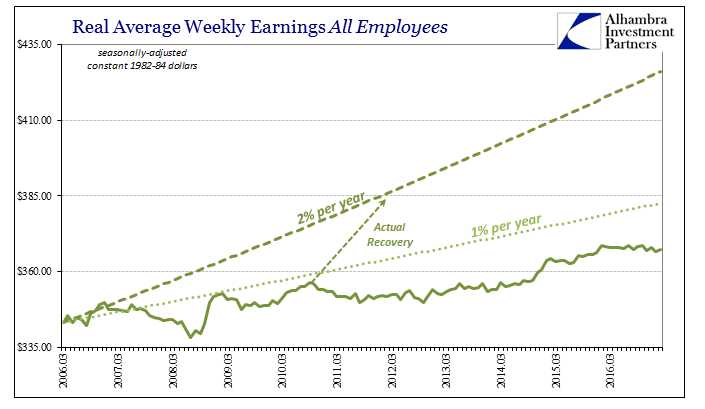 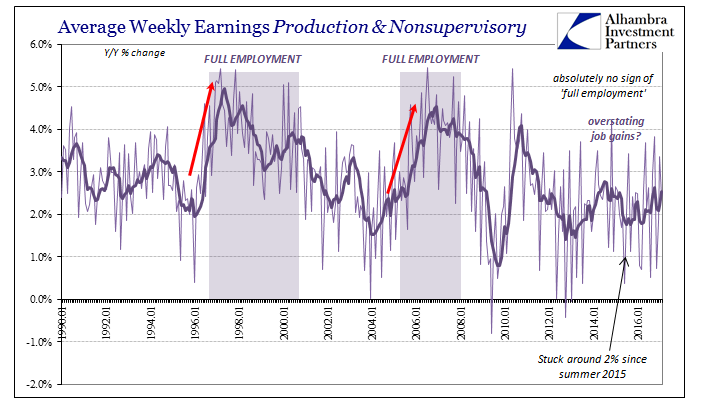 Nominal earnings jump bringing up real earnings so that the fruits of actual recovery are widely distributed and redistributed so that growth is sustainable. The lack of wage and earnings growth simply means that any improvement, relatively speaking, can be at best temporary – like 2014.

Yellen confirmed exactly that also at the media gathering yesterday.

If one averages through several quarters, I would describe our economy as one that has been growing around two percent per year. And as you can see from our projections, we — that’s something we expect to continue over the next couple of years…

Our — you know, as you said, the data have not notably strengthened. I — there’s noise always in the data from quarter to quarter. But we haven’t changed our view of the outlook. We think we’re on the same path, not — we haven’t boosted the outlook, projected faster growth.

Translation: the output gap is closed even though what resulted is nothing like what was forecast and promised even just three years ago. There is only weakness from here on until Yellen and all the economists like her are removed and monetary reform (replacing eurodollars) is enacted. But at least there will be “signs” of labor improvement.