China’s central bank, unlike other central banks, is constantly active almost never resting. Because it is always in motion, the PBOC can seem to be “adding” liquidity at the very same time it might be “draining” it. Its specific actions should never be interpreted as standalone procedures related solely to some unknown policy stance. That is particularly true given that we know what their stance is and has been – neutral. That means all these individual transactions are designed to either add RMB or at times take it away so that the monetary conditions in China are neither loose nor tight according to whatever internal guidelines (which we are not now, nor I expect we ever will be, privy to).

But conditions in China’s money markets seem to be the latter despite a great deal of effort for it not to be that way. And so we are graced with interpretation about China that often at the same time describes money markets as being tight because the PBOC wants it that way even though it injects often hundreds of billion of RMB at a time.

Repo rates as well as unsecured interbank rates have skyrocketed again in the past few days, this time to the highest levels since before “global turmoil” first erupted. For this Bloomberg reports today on rumors of missed interbank refis in the repo market.

China’s central bank injected hundreds of billions of yuan into the financial system after some smaller lenders failed to make debt payments in the interbank market, according to people familiar with the matter…

China’s smaller lenders faced tighter liquidity this week as benchmark money market rates climbed to the highest level since April 2015, reflecting a mix of technical factors including cash hoarding for quarter-end regulatory checks. By letting borrowing costs rise, the People’s Bank of China may have been sending a warning to over-leveraged lenders, according to Banco Bilbao Vizcaya Argentaria SA. The central bank has been known to allow short-term jumps in money market rates to discourage excessive borrowing.

This is typical of mainstream China commentary, where if something occurs it is immediately attributed to a policy purpose. If money market rates are unusually high, then surely it must be because the PBOC wants it that way (to “send a message”, but to whom?). In truth, however, if it seems like the PBOC is and has been very inconsistent in its injections and drains that is because it has been, but not by choice.

Simply reviewing the central bank’s balance sheet and the history of changes within it reveals the massive difficulties plaguing what should be an actually “neutral” policy. 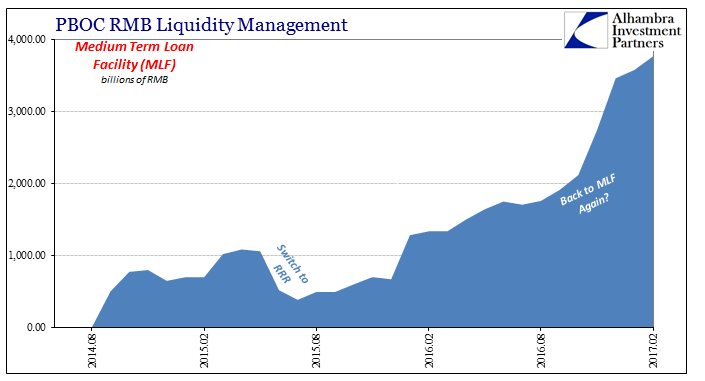 In February, winding down from the high liquidity of the Golden Week, the PBOC both added and subtracted RMB but through different channels and therefore to different purposes. The balance of the MLF rose again in February, which has a tighter correlation with the repo market. Overall, though, “Claims on Other Depository Corporations”, a category which includes the MLF, was reduced in after-holiday considerations. 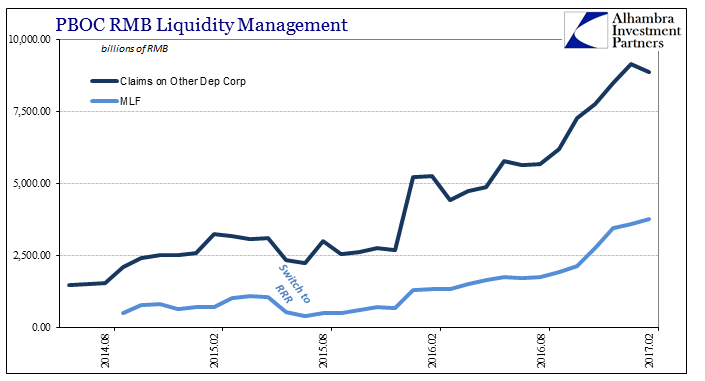 I documented the PBOC’s big Golden Week problem with last month’s update for January 2017. Their balance sheet figures for February are simply the reverse. 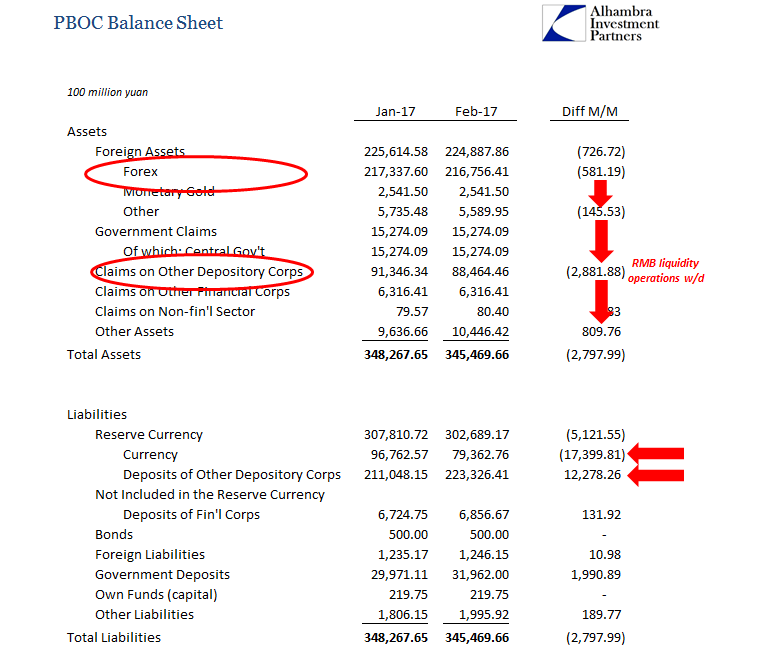 Therefore, what is relevant for monetary considerations is the overall trend that passes through all these seasonal ups and downs, defining more clearly exactly what “neutral” is meant to convey in RMB. 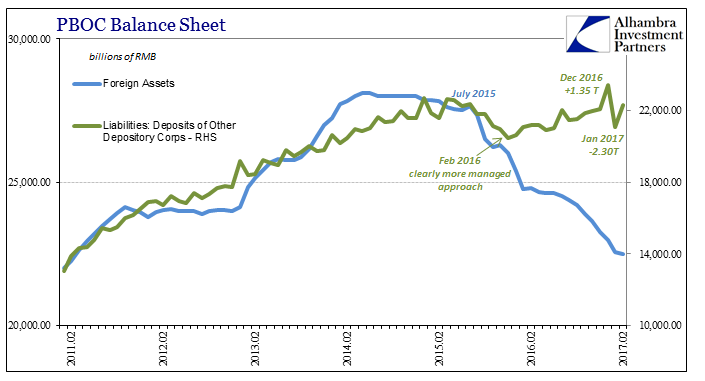 Here is where you get a sense of China’s problem, and it is big one. The PBOC rather than sending an unknown warning to unknown internal parties is instead severely constrained by its asset side base – “dollars” in the form of forex assets. The result of this ongoing, chronic disturbance is a “neutral” monetary trajectory very different from what “neutral” used to mean (as monetary growth and economic growth both decelerate but importantly not at the same pace). 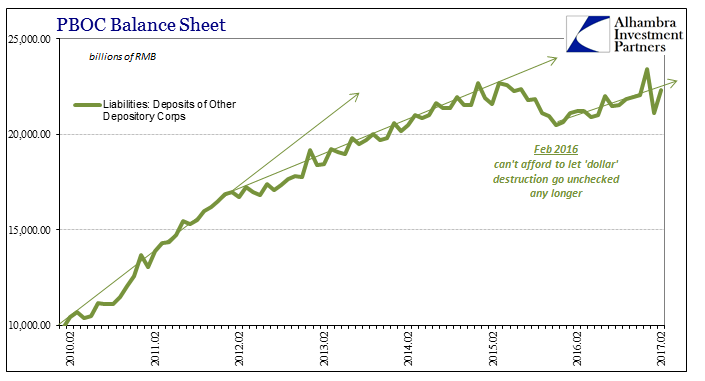 All of which points toward a very different money market environment in March that would explain why illiquidity might be so high so as to cause some unknown number of rural banks to disrupt repo markets and therefore RMB money in general. I wrote about it both yesterday (hinting) and earlier today (subscription required):

For the People’s Bank of China, the “ticking clock” is likewise an election rather than a condition on autopilot. Accepting CNY “devaluation” is a tradeoff, for intervening against it requires both external resources (forex “reserves”) as well as an internal response. Mobilizing those FX dimensions is both a future cost at maturity as well as a present tense drain on RMB (by virtue of their balance sheet where the bulk of the asset side is “dollars”).

For the mainstream everything appears to happen as if at random, which is why the default explanation is always how the PBOC must want it this way. Using the PBOC’s balance sheet and past history as a guide, however, suggests intent but not at all in the way in which it is described. Chinese monetary policy, as Federal Reserve or ECB policy, is reactionary rather proactive in the form of warnings or anything else. The Chinese have to consider “dollars” because they are right there on the PBOC balance sheet, burning a hole right through the middle of it (and coming out negatively on the liability side, which is base Chinese money). 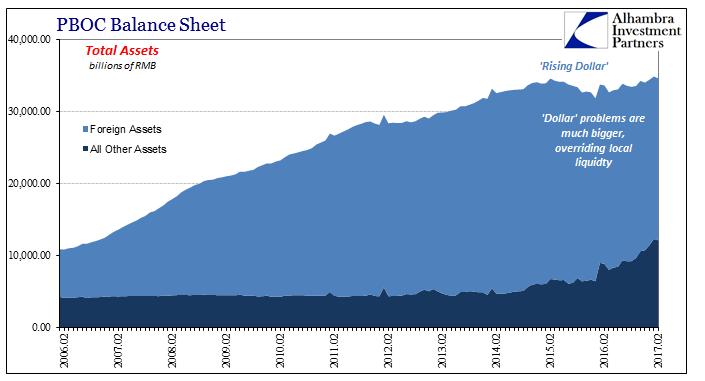 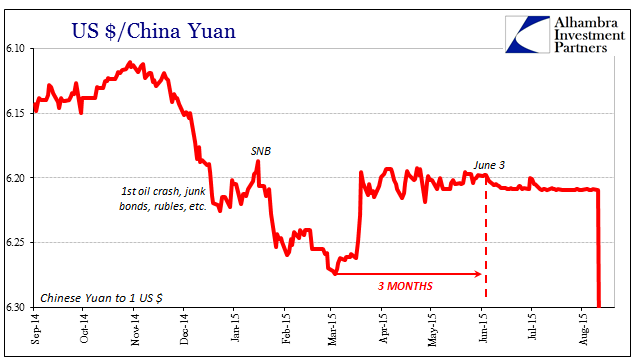 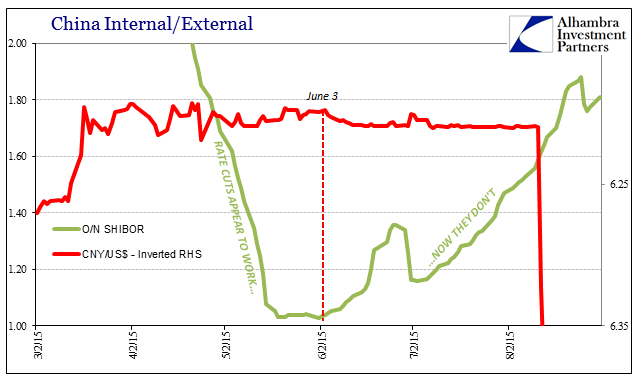 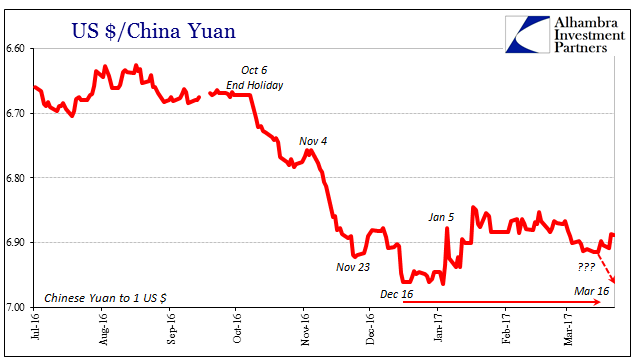 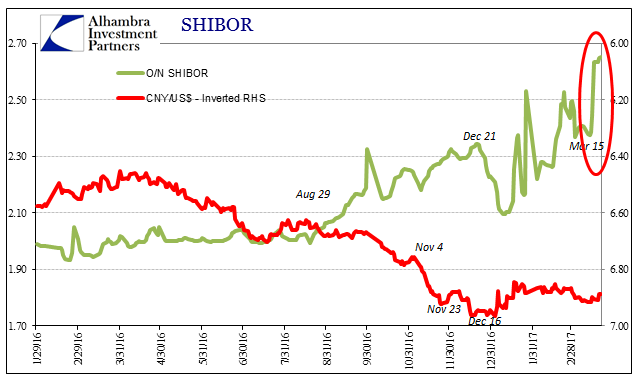 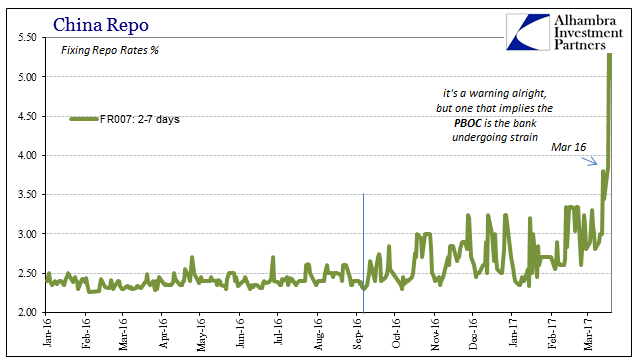 Viewing Chinese money from the perspective of the eurodollar, and the sometimes clear tradeoffs that are presented by it, we find a consistent pattern but one that offends mainstream sensibilities on a range of subjects. The constant through it all has been the general ineffectiveness of whatever China’s central bank does to assemble its “neutral” stance, though not for lack of trying. If there is one thing Chinese monetary officials have done since last February it was to print RMB in a way in which Ben Bernanke could only have dreamed. And like the Fed, because the PBOC has done so it is just assumed that it all must have worked, because why wouldn’t it?

It’s a question I answered in anticipation almost exactly three years ago now, quite some time before the “rising dollar” ever became a thing: