The rebound in commodity prices is not difficult to understand, perhaps even sympathize with. With everything so depressed early last year, if it turned out to be no big deal in the end then there was a killing to be made. That’s what markets are supposed to do, entice those with liquidity to buy when there is blood in the streets. And if those speculators turn out to be wrong, then we are all much the wiser for their pain.

In the particular case of 2016-17 and “reflation”, the more immediate circumstances surrounding commodities have taken on increased importance. Oil in particular has become the chief expression of economic direction. It has become this way, it turns out, for reasons that go beyond mere sentiment. The marginal US economy was boosted in significant fashion by the oil sector’s love of triple digit oil prices; take that away, and the US economy looks much different.

That is why these market price swings take some time to become economic swings. Economic agents want to be reasonably sure, or as much as humanly possible, that speculator bets have an equally reasonable chance of paying off. If they do, then it will attract others and the price will in all likelihood stick, giving participants in the real economy the signal to go back and do at least what was put off by the downturn.

We have no way of knowing how long this process of confidence building will take, and it is not the same each time it is practiced. After the Great “Recession”, for example, it was going be a lengthier rejuvenation no matter what. Human nature required extra assurances about every aspect for all good reasons. In 2016, it was almost by contrast a rush to get back at it – or at least claim to feel like being ready to return.

With oil a central focus, oil prices did a lot more than just project a “supply glut.” As they rose and retraced relatively quickly they started to bring up plans for especially shale plays to restart production. From there, ancillary equipment and labor started seeing signs of resurrection, too. The transmitting of WTI’s ascent was a real economic phenomenon, and though it is impossible to map out the literal pathways for it, estimating the exact proportion of reactivation throughout the wider economy, we can be sure that it took place to some significant degree on that narrow basis. 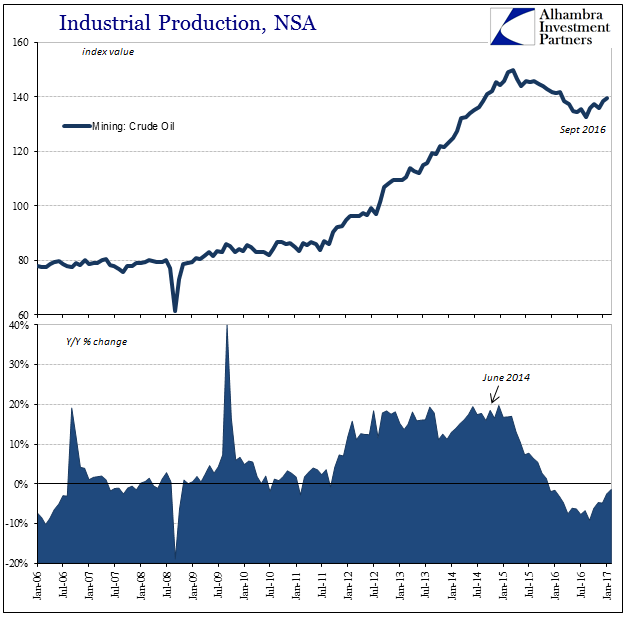 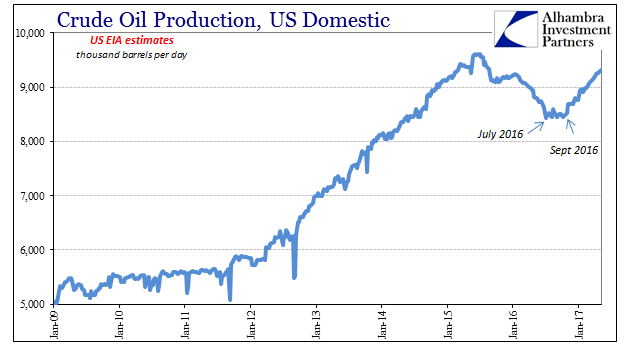 Both the Federal Reserve’s Industrial Production statistics as well as those taken from the US Energy Information Administration show that production of crude turned higher around September last year. Many of the sentiment surveys like the ISM Manufacturing or the Federal Reserve’s various regional indices turned sharply higher around November, seemingly attributable to the possible changes represented by a much different political administration in the US, but would there have been enough of a basis for it had crude production not been moving positively in the weeks before? In other words, was it really a Trump surge, or an oil one?

Again, the change in the oil patch situation was more than just sentiment, and it was likely that which reflected in all manufacturing sentiment including (maybe more so) the effects of it on overseas conditions and US exports. Oil producers here and elsewhere by September were confident enough in oil prices at least sticking around $50 to get back at production, meaning second and third order effects surely took place throughout many related industries in the time just before the Presidential election. 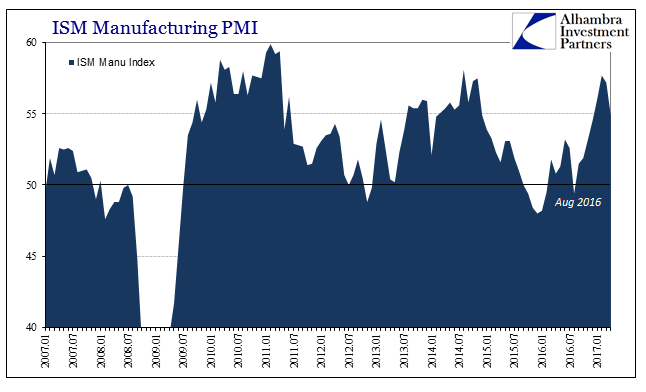 The problem of following the price of oil in more than just oil production is obvious, a situation that has been more and more presented over the past few months. Oil sticking around $50 was supposed to be just the first step, a base from which to move up and back toward $100 again and a normal or at least semi-normal economy. Staying around $50 for about a year isn’t a good scenario, particularly when every occasion for volatility in WTI, Brent, and others is downside volatility. 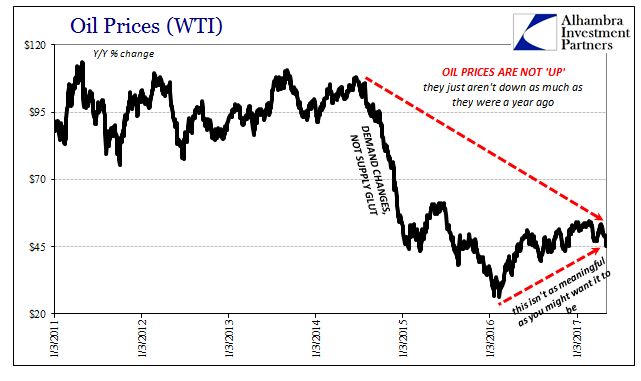 If oil producers start to get nervous again, they would likely project that unease back up the economic chains of second and third order effects, where it almost looks like the annual change in the price of oil has become the template by which all statistical accounts are tracking.

The Fed’s Empire State Manufacturing Index today was estimated to have resumed a negative sign in May for the first time since last October. It had jumped as high as +18.7 in February, declining only slightly in March before dropping more dramatically over the last two months, including this one. It is an entirely too familiar arrangement, one sketched out all over the world by CPI’s and other various inflation indices. They have all uniformly peaked in February, declined slightly in March, and are now by virtue of oil’s lack of momentum set for the same kind of retracement (or re-retracement). 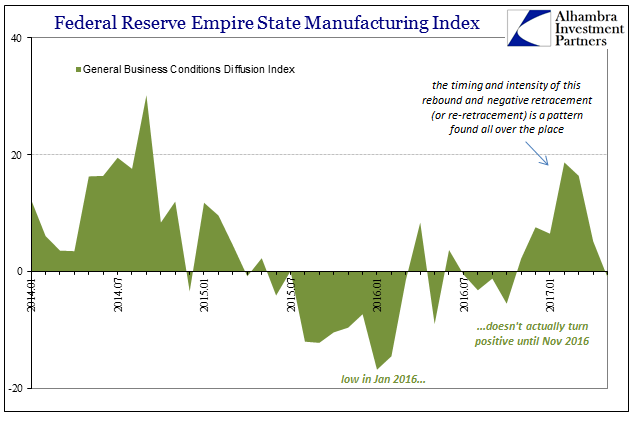 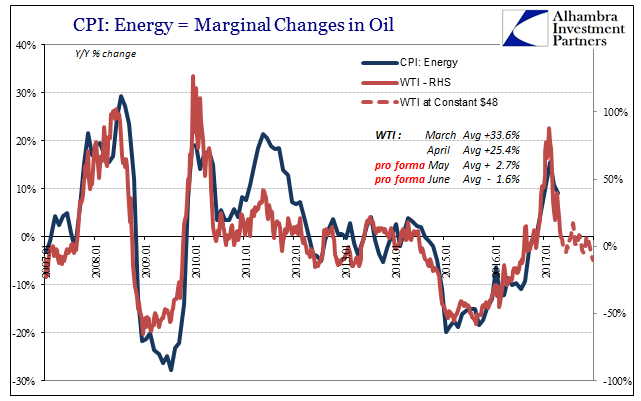 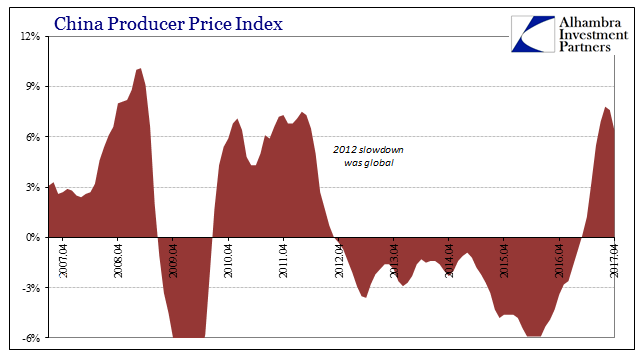 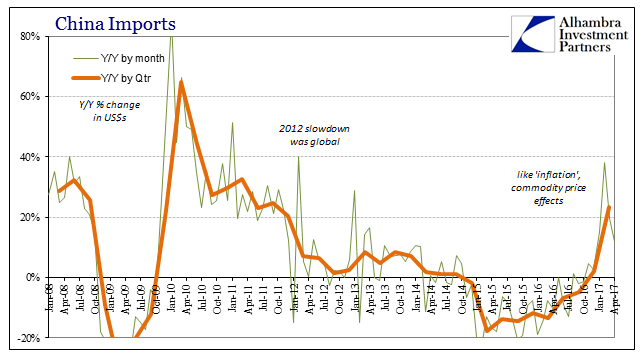 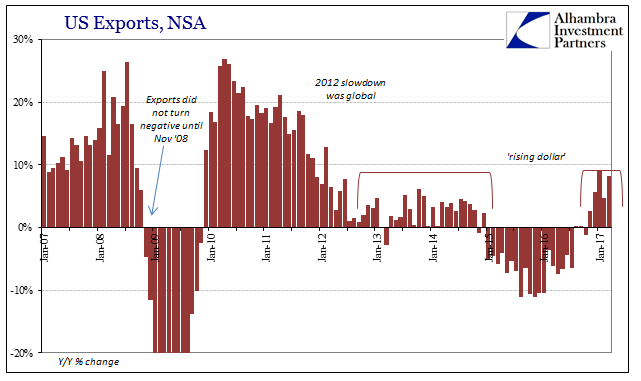 That can’t be, however, as even sentiment surveys are not going to be driven by the statistical quirk of base effects measured in consumer prices. There has to be real processes that mimic the results of the CPI as to actual manufacturing, and it seems as if the marginal changes in the oil sector are the pathology of, to this point, said disappointment. The lack of momentum indicated by stubborn $50 oil is both the CPI base effect as well as the increasingly nervous oil producer maybe putting on hold again all those grand designs.

So as we fully expect no more oil price boost to the US CPI (or anywhere else), there is already an estimated removal of it in manufacturing sentiment as demonstrated by the Empire Fed survey (and likely others that will follow). Oil speculators were expecting, or at least hoping for, one set of circumstances only to be let down by the physical realities of this woeful economy. Similarly, manufacturers were in all likelihood seeing better things if for a time for the same general reasons.

It is one motive to remain pessimistic about the 2017 economy even when compared to 2016. A truly improving situation would not be depending on such a narrow channel, in this case the energy sector. It would be broad-based so that if one part stumbled on the way back up we might not even notice. Instead, the reality of this year is that as oil goes so does everything else. It’s not a good way to move forward; it is instead another prominent sign of staying stuck.