Repeat 2014; Praying Again To The God of ‘Global Growth’

Repeat 2014; Praying Again To The God of ‘Global Growth’

One of the more troubling aspects of mainstream commentary in 2014 was its blandness. Statements were made with a purpose but also purposefully avoiding specifics. It was common to hear or read “the economy is improving” without being shown why or how in convincing fashion. After suffering a second bout of weakness in 2012 and 2013, unexpected of course, everyone simply believed those words because why not.

One of the offshoots of that vagueness was “global growth”; as in “the global economy is improving” so the local one will certainly follow. In many ways this was even more convenient because of its impreciseness. It essentially established an unfalsifiable premise: somewhere out there in the vast world there is growth, so soon there will everywhere be growth. It’s not logic so much as desperation. I wrote about it specifically in September 2014, suggesting that economists and policymakers were doing little more than praying to the god of global growth.

The curious part about that “pick-up in global demand” is exactly what I am driving at. What he is saying is that the economy in Japan will get better because some nebulous notion of the global economy will get better; or, if you want to be specific, they expect the economy to improve because the economy is expected to improve. While he (and those like him) will not admit to engaging such circular logic, that is what it really amounts to…

Someday there may indeed be a pick-up in global growth, though we will probably need all our fingers (and some toes) to count how many “unexpected” occurrences disrupted that “pick-up” over the years to come. And when it does come, there will be no need at all for vagueness about its features, as it will be obvious and unmistakable. Until then, these poor attempts at rational expectations manipulation should have been curtailed by now by even a modestly curious media that is sick of writing the same lines over and over.

“Global growth” was a talisman for being unable to explain just why it was “supposed” to get better after being wrong about weakness year after year.

The signs of a stronger global recovery and increasing global trade suggest that foreign demand should increasingly add to the overall resilience of the economic expansion of the euro area.

A Japanese Cabinet officer on May 12:

Japanese Finance Minister Taro Aso said on Friday that the world economy was improving and the outlook was brightening, but that there was no room for complacency because of uncertainty over U.S. economic policies.

The FOMC’s Lael Brainerd on May 25:

The global economy is brighter than it has been for the last few years.

And so on, and so on. You would think that after doing all this same jockeying three years ago that these statements wouldn’t just be uncritically accepted at face value. But they are, and everywhere; at least everywhere except the bond market.

They are all once again praying to the god of global growth because they know at least this time around it’s not at all like it was. Where this difference is immediate and clear is in the various global inflation statistics. “Reflation” has been far more of a media creation stoked by these again nebulous appeals. The economy is improving because.

One of the apparent reasons to believe in it, though, was inflation that all over the world suddenly and often sharply appeared. In the US as well as Europe, inflation estimates for the first time in years met their official targets, 2% in both places. Combined with “global growth”, it actually seemed as if it was real this time.

But that was the case only for people who weren’t paying attention. The trend for inflation was entirely predictable. It took very little effort to forecast how it was going to play out. Since oil prices were the primary variable, without a sustained increase in oil the effect on inflation would quite quickly subside. Oil prices have for over a year been stuck below $55.

Central bankers, of course, were well aware of this. Yet, they let the collective mainstream imagination run wild, never publicly distancing their official position from the building enthusiasm. Instead, they stayed on the more ill-defined ground of “global growth” to support “reflation” while plausibly remaining distant enough from it because it was predetermined to fail. Janet Yellen can say that she never hyped the 2% PCE Deflator, instead only determined that “global growth” was as ever “improving.” She may lead you in that direction but ultimately it was you who made the connection (as she wanted).

Right on schedule, inflation rates have flamed out. Today the BLS reports that the US CPI gained just 1.87% year-over-year in May. That’s down from 2.20% in April and a high of 2.74% in February when oil prices were then at their most favorable comparison (the base effects of the exact trough). 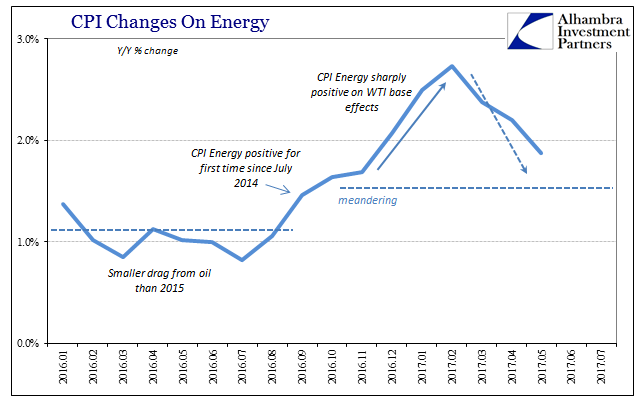 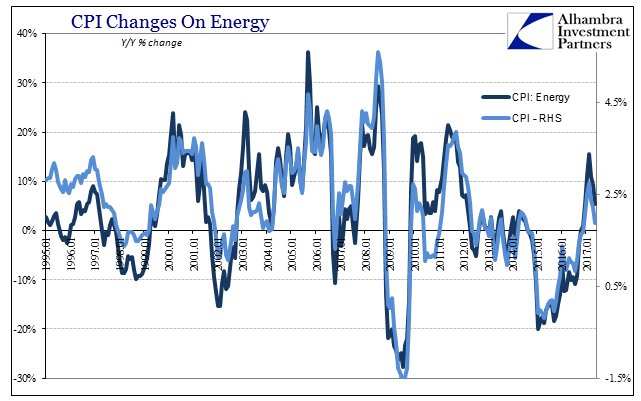 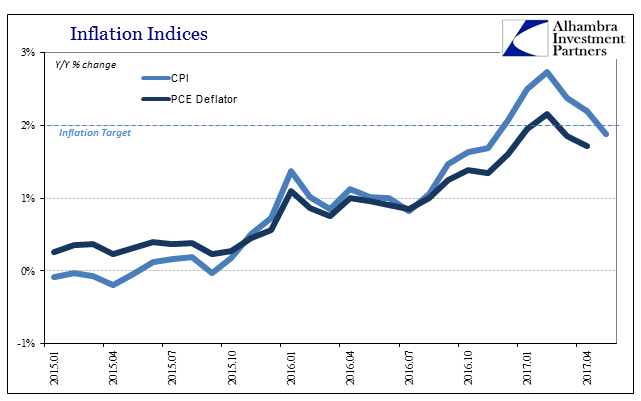 Even the so-called core inflation rate has moved backward, at least from the “reflation” perspective. Stripping out the effects of food and energy prices, the CPI expanded by just 1.7% in May. That was the lowest rate since May 2015. For the mainstream desperate for any corroboration of wages, this is truly bad news. 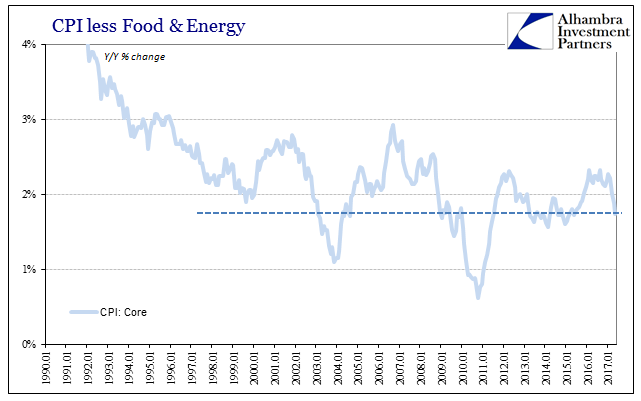 The importance of inflation cannot be understated, particularly when driven by expectations for monetary policies. As Milton Friedman showed, inflation is a monetary phenomenon. For central banks over the last ten years, they have expended enormous often unthinkable effort just to achieve it, if only because they believe that inflation acts as a positive catalyst on “aggregate demand.”

One of the very few specific pieces of evidence for their success was in the US the unemployment rate. Like inflation over the past few months, policymakers could back then tie “global growth” with the often rapidly declining unemployment rate as a way to suggest that though it wasn’t immediately apparent things were improving there had to be just over the horizon what we could all expect of an actual recovery.

But a low unemployment rate is itself really not that compelling, particularly given our current circumstances. Therefore, to make it “real” would require tangible acceleration in wages which would therefore show up in the inflation statistics after enough time. That’s what got the media in particular excited about the CPI, PCE Deflator, or Europe’s HICP; if for only a few months (in terms of the PCE Deflator and HICP, just the one). It was meant to be “global growth” turned into something legitimate.

What it has instead demonstrated was this clear and ever-present bias. There was no reasonable basis whatsoever to believe that inflation anywhere was suddenly about to conform. Even Federal Reserve officials admit as much, as buried in their policy meeting minutes they state a very different view:

The staff continued to project that inflation would increase gradually over this period, as food and energy prices, along with the prices of non-energy imports, were expected to begin steadily rising this year. However, inflation was projected to be slightly below the Committee’s longer-run objective of 2 percent in 2019.

So “global growth” is as it was in 2014, a phantom of positive momentum in a world otherwise devoid of it. It’s the equivalent of saying that something will work even if we have no idea what that might be. They have to make the claim because without it there is no evidence at all the world is actually improving; the considerable number of accounts rest, as they have, all on the wrong side of the ledger. Even the unemployment rate without inflation is a figment.