Valuations: It Is Different This Time

Valuations: It Is Different This Time

(with additional contributions from Margie Fernandez; edited by Joe Calhoun)

The Net Worth of Non-financial Corporate Business declined slightly in Q1 2017 according to the Federal Reserve’s Financial Accounts of the United States (Z1). The revised quarterly figures suggest that economic net worth eased to $23.62 trillion after a record high $23.69 trillion in Q4 2016. That likely relates to economic weakness to start the year, though not of any lingering concern given what is a well-established upward trajectory.

In using corporate net worth to estimate equity market valuations, however, the quarterly stumble means that under Tobin’s Q, valuations would rise sharply. The Z1 statistics estimate that the market value of corporate equities rose, gaining $1.18 trillion in Q1 alone. That was the largest quarterly increase for equities since Q4 2013. Truly “reflation” repeats.

The Q ratio, which had dipped under 1.0 for each of the past six quarters of the “rising dollar”, blows back above that mark being calculated at 1.04 for this latest period. It brings this measure of equity valuations back up to where they were at the start of 2015. 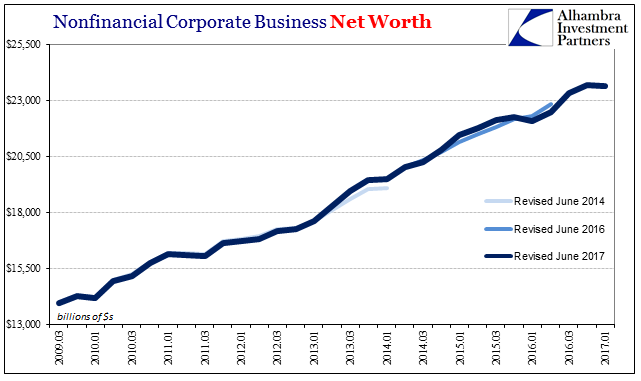 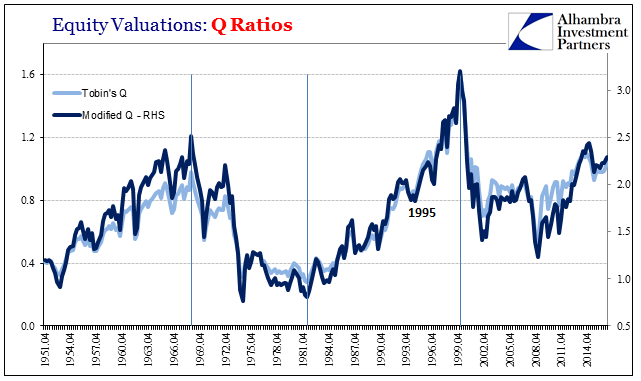 Our modified Q ratio, subtracting the market value of corporate real estate holdings from net worth, also rose sharply despite a small gain for estimated CRE. By whichever Q valuation measure, the market is pushing back toward levels comparable only to the dot-com era or the peak period at the start of the Great Inflation.

Other valuation methods show the same extreme levels. Robert Shiller’s cyclically-adjusted P/E is at its highest since March 2002. At more than 30 times adjusted earnings, that is about the same as valuations in the middle of 1997. 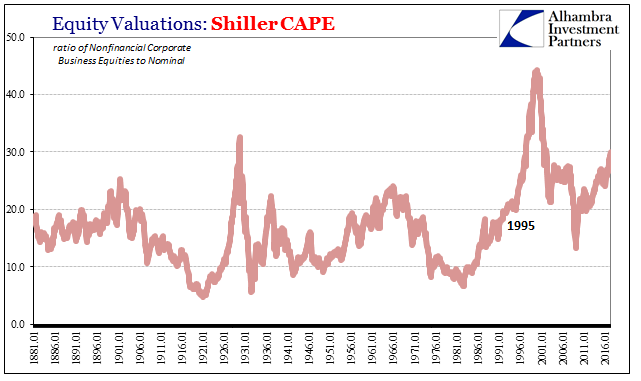 The use of CAPE as a comparison tool has been criticized lately – it’s different this time – but the real value in Shiller’s data is its length. Comparing valuations across 125 years of data gives one greater historical perspective.

A more accurate way to interpret the CAPE data series, as the Q ratios, is in the frequency of distribution. Before 1995, a CAPE of 31 was in the top 1/10th of 1% of all monthly data – practically only the very peak in 1929. But in the post dot-com era, such high valuations have become more frequent; indeed, the whole market valuation has shifted upward so that what was before in the top 1/10th of 1% resides today only in the top decile. 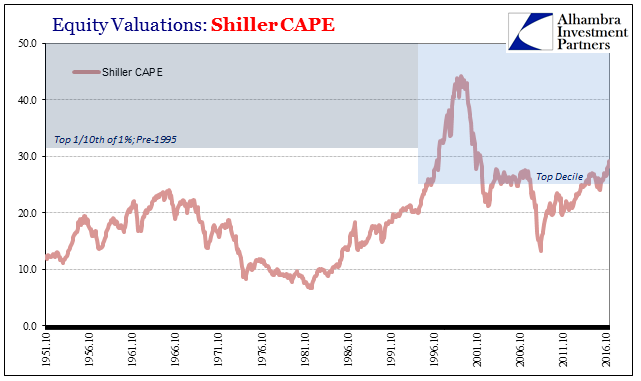 Since the CAPE data series matches quite well the Q ratios, we can reasonably assume similar interpretations. Valuations are clearly stretched, but over the last twenty years stock investors have become accustomed to that condition in a way that hasn’t ever happened before. Even the crashes in the dot-com era and the Great “Recession” failed to trigger complete mean reversion. 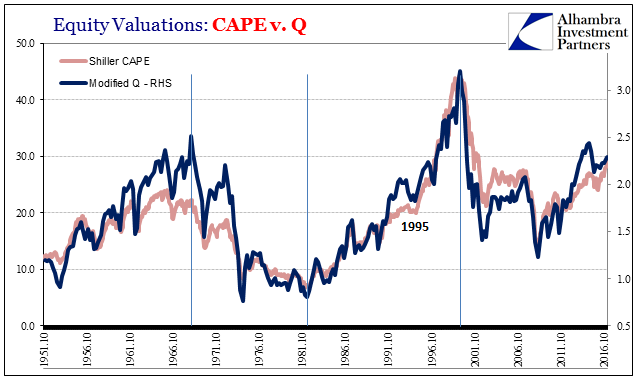 Today’s stock prices, in stark contrast to bond prices and yields, seem to embed an expectation that economic growth will accelerate in the future to justify today’s prices. Indeed, current valuations imply a rate of growth for an extended period of time that is highly unlikely given current workforce and productivity trends. Stock investors have been waiting on the Godot of growth for most of this century and one can’t help but wonder at what point they’ll get up and leave the theater. 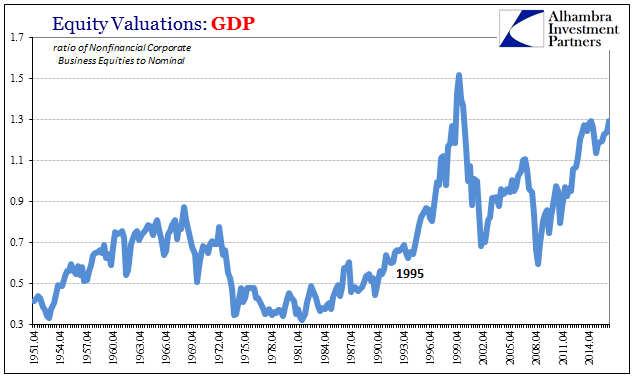 One need not rely solely on Mr. Shiller’s methodology. Valuations across a variety of methods all tell pretty much the same story. 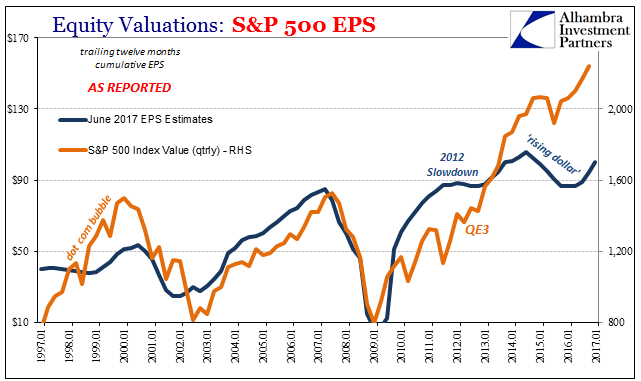 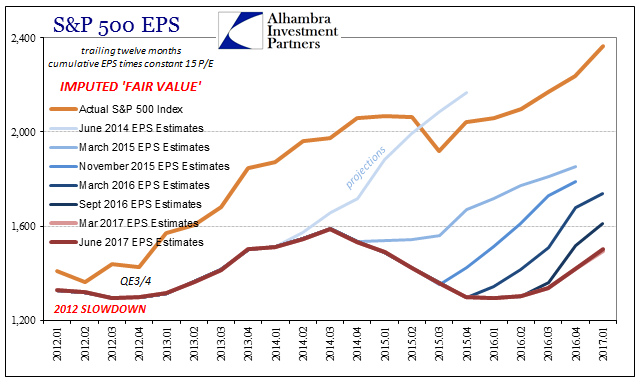 Earnings and revenue estimates for Q2 are also coming down although still expected to show year over year growth of about 6.6% and 5% respectively. That is down from estimates of nearly 9% earnings growth and 5.5% revenue growth at the end of Q1. The downward revisions have been across the board, 10 out of 11 sectors, with energy showing the largest negative revisions. Energy though is still expected to show a large increase year over year. Ex-energy earnings are only expected to rise about 3%. Full year estimates are also coming down and Q1 may be the peak in year over year growth.

Improvement in earnings in recent quarters is mostly due to two factors: recovery in energy company profits and improvement in overseas earnings. As noted above, analysts are quite busy today reducing estimates for energy companies. And if someone can come up with a bullish case for oil that doesn’t depend on OPEC actually sticking to its quotas, we’d love to hear it. Energy company earnings are unlikely to show this magnitude of growth in future quarters.

Like the late 1990’s, investors are paying up today in expectation of a tremendous positive growth shift tomorrow. Like those late ’90s investors they may get an actual shift in growth but it may not have the sign they expect. It is the denominator of the P/E equation that accounts for much of today’s pricey market. Prices aren’t actually up that much in the last twenty years. What’s been missing is the growth everyone thought the “new paradigm” would usher in.

The only thing missing from the mean reversion scenario is a catalyst. Unlike 2008 or the dot com era there hasn’t yet been any kind of spark to ignite the fear. In the former it was liquidations and margin calls that created the dramatic crash especially after July 2008; in the latter it was the rude intrusion of common sense brought about after many of the high flying companies of the era were finally seen as worthless, and therefore dangerous.

We don’t know what the spark will be this time around and in fact there may not be one. We feel confident in saying that today’s valuations are not supported by the US economic outlook. Workforce growth – or lack thereof – productivity growth – or lack thereof – and the continued deterioration of the Eurodollar market are not supportive of the growth necessary to justify current valuations. That means that future returns on stocks are likely to disappoint – but we don’t know how they’ll disappoint.

This time around is different in that valuations are more uniformly stretched; there isn’t one overvalued sector like technology in 2000. Any reversion to the mean will certainly not be like the 2000-2003 bear market when there were plenty of places to hide. And it probably won’t be like 2008 because global bank balance sheets have shrunk. But reversion to the mean will happen and all those buy and hold passive investors out there are going to be tested. How many of them will be able to weather multiple years of low or negative returns? Some of the most overvalued stocks in the market – in our opinion – are the Blue Chip dividend payers that everyone has bought as bond proxies. How much will that dividend matter if your principal is down by half?

Every bull market produces excesses that get reversed in the ensuing bear market and for this one the best candidate is the dumbing down of investing, the passive indexing craze. Indexing may not be the road to serfdom but it isn’t the yellow brick road either.