Bi-Weekly Economic Review: Has The Fed Heard Of Amazon?

Bi-Weekly Economic Review: Has The Fed Heard Of Amazon?

The economic surprises keep piling up on the negative side of the ledger as the Fed persists in tightening policy or at least pretending that they are. If a rate changes in the wilderness can the market hear it? Outside of the stock market one would be hard pressed to find evidence of the effectiveness of all the Fed’s extraordinary policies of the last decade. Even there, I’m not sure QE is actually the culprit that has pushed valuations to, once again, incredible heights. I’m also not sure exactly what the Fed is trying to accomplish and I don’t think it really does either. All evidence points to the nonsensical idea that interest rates need to be raised so the Fed will have room to cut them later. Unfortunately, that is as logical as monetary policy gets these days.

I may not know what’s going on and Janet Yellen surely doesn’t but the bond market usually does. And unlike Yellen we here at Alhambra do pay attention to what the bond market is telling us. It isn’t a tale of full employment and imminent wage and cost push inflation. It also isn’t a tale of robust growth that needs reining in lest it get out of control and put too many people back to work. So, we are left scratching our collective heads trying to figure out what exactly is motivating Yellen & Co. to try and slow down an economy moving at the speed of a sloth.

The economic data released since our last update was not kind to the Fed’s narrative or reputation. Things that seemed to confirm the Fed’s desire to raise rates were the Labor Market Conditions Index, the JOLTS report, the weekly jobless claims data and some of their own regional manufacturing surveys. The reports that didn’t were factory orders, productivity, the ISM manufacturing report, wholesale and business inventories and sales, PPI, CPI, retail sales, industrial production, housing starts and consumer confidence. You might notice a disparity in the length of those lists.

The Fed fears that, with the unemployment rate down to 4.3%, people will soon have the confidence and courage, heaven forfend, to ask for a raise. If that were allowed to happen then those people might then go out and spend it on something which might lead to sellers raising prices if Amazon didn’t exist. Based on the most recent retail sales report,  – and the fact that Amazon’s stock just hit an all-time high – that fear would seem vastly overblown. Sales were down 0.3% when they were expected to rise by all of 0.1%. The current year over year rate, just south of 4% is about as good as its gotten over the last 4 years or so but that is paltry compared to past expansions. The weakness was widespread with department store sales leading the way, down 1%.

Industrial production and factory orders offered no respite. IP was flat with auto production down 2% and business equipment down 0.7%. Factory orders were down 0.2% with durable goods down 0.8%. That makes sense in light of the inventory reports which showed contraction at the wholesale level as well as overall. That might be a potential bright spot for the future but alas the inventory draw was matched by a drop in sales.

Rounding out the weak reports was the report on housing starts last Friday. Housing has been one of the few bright spots in this economy but it has been dimming recently, as I’ve pointed out in the last three of these reports (see here, here and here). Starts and permits were both down sharply. Single family starts were down 3.9%, permits 1.9% while multi-family took a bigger hit, down 9.7% and 10.4% respectively. The apartment building boom that has driven residential investment the last few years would appear to be over, at least for now. Absorption rates are falling, vacancies are rising and rents have all but stopped rising. Friday’s report knocked down estimates of Q2 GDP growth to less than 2%. The big rebound in second quarter growth that everyone was expecting isn’t amounting to much.

We can see the weakness in our market based indicators. The yield curve flattened by another 6 basis points and has now given up all the steepening that started last August and accelerated after the election. Stocks may still hope for tax reform but the bond market has given up and faced the reality that any change in economic policy is probably not going to happen during the recesses of the oxymoronically named Senate Intelligence Committee.

By the way, Jeff Snider wrote two really excellent posts on the yield curve last week. The first discusses how to interpret the curve and it isn’t just the spread that matters. The second is even more interesting, I think, as it compares the movements of the yield curve in the 1930s to today. It is remarkably similar and very thought provoking.

Inflation expectations, taking their cue from the PPI and CPI reports, also fell, down 8 basis points since the last update:

The nominal 10 year note yield actually didn’t change since the past update. Rates moved up slightly but then fell right back: 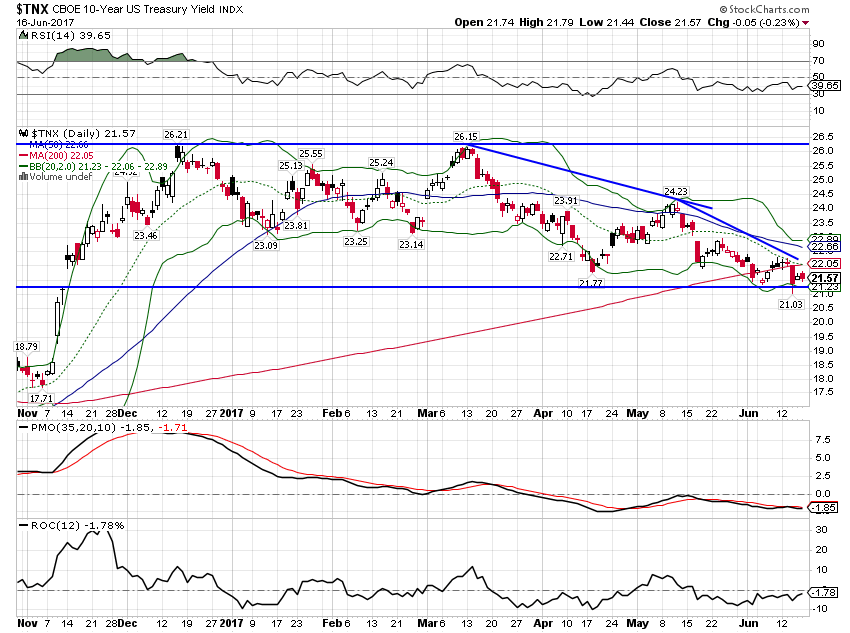 Further confusing the picture, TIPS yields rose. Inflation expectations fall and real growth expectations rise ever so slightly. There might be a lesson for the Fed in there somewhere.

The move in the yield curve would seem to be all about inflation expectations and again I am left wondering what exactly the Fed thinks it is fighting.

Meanwhile, credit spreads actually widened since the last update. Well, if you want to call 3 basis points widening. Risk appetite has not waned even in the face of weak economic data.

The dollar didn’t change much since the last update but the trend since the beginning of the year is pretty obvious and none of the recent action changes that. 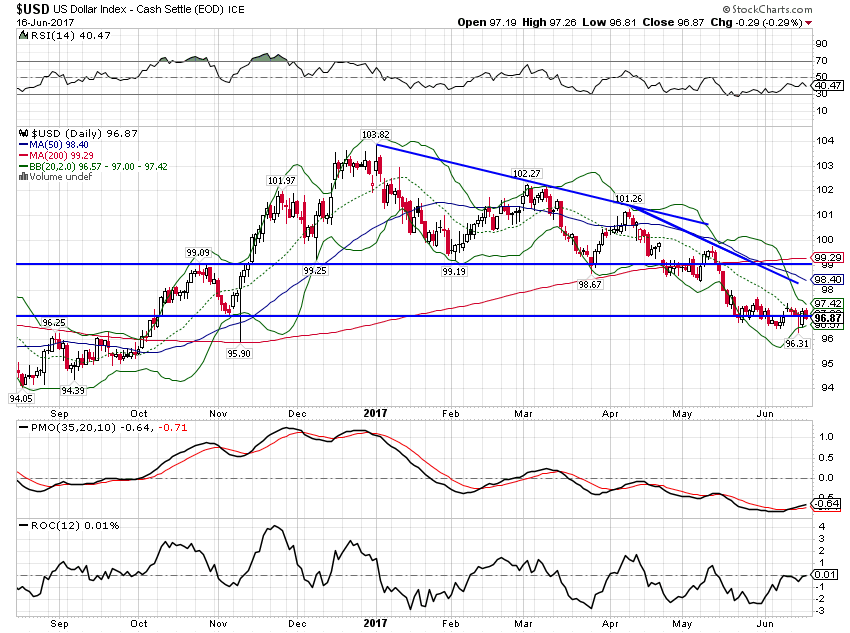 Gold was down slightly since the last update but as with the dollar index the trend since the beginning of the year is obvious and not supportive of the growth story. 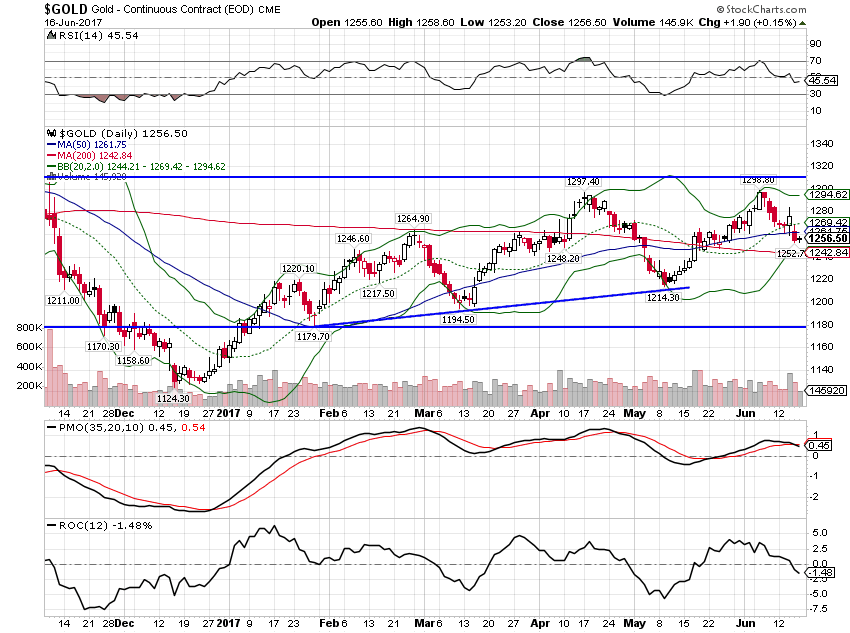 The Bloomberg Commodity index fell through support. Not exactly looking for a boom: 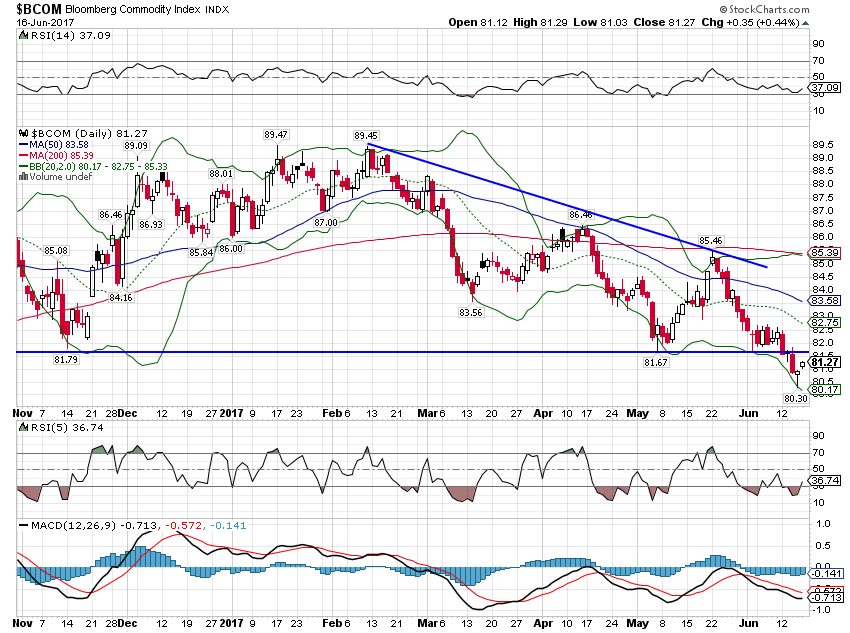 As I’ve been writing for years now, our economic situation hasn’t changed much. Growth is still capped around 2% with risks apparently to the downside especially with the Fed intent on heading off a non-existent – so far – inflation.

Our market indicators do not point to any imminent problems but they do continue to point to weaker growth than widely expected by economists and stock speculators. I suppose the Amazon/Whole Foods deal last week does show a certain amount of animal spirits still extant in the corporate suite. It also shows that anyone hanging their policy hat on rising inflation is likely to be disappointed. Amazon’s business model is essentially based on predatory pricing – when will anti-trust finally become a problem for Jeff Bezos? Anyone want to bet on why he bought the Washington Post? – and there’s a reason every company with any exposure to groceries saw its stock tank last Friday around 8 a.m.

The Fed is expected to raise rates at least once more this year and start to unwind their balance sheet. I’ll be shocked if they accomplish the first but happy if they at least start on the latter. And I’ll be even happier if they concentrate on selling the longer term bonds they own. A bullish steepening of the yield curve – long rates rising faster than short rates – might not be sufficient by itself to revive growth but it certainly wouldn’t hurt. Steeper yield curves are associated with higher growth while flat or inverted ones are associated with lower growth. Correlation and causation are hard to disentangle – is it higher growth that steepens the curve? Or a steeper curve that leads to higher growth? I don’t know for sure but I’d venture a guess that it is a little of both. Time to find out if you ask me. Nothing else has worked.