Chart of Last Week: In Need of Official Address

Chart of Last Week: In Need of Official Address

According to the US Treasury, the calculated equivalent treasury bill yield for the 4-week maturity was 76 bps at Friday’s close. At such a short time frame there isn’t actually a single instrument that creates the rate, more of an amalgamation (spline) of various 4-week securities staggered on their own. The bill maturing this week, for example, closed last week with a yield (ask) of 76.6 bps; the one maturing on July 20, 73.8 bps.

The Federal Reserve’s reverse repo (RRP) program is designed to create a floor for money market rates, thereby giving the Fed the ability to control monetary conditions for more than just the federal funds market. This is a very important concept in monetary policy. Being able to directly affect the full range of monetary behavior is central to any central bank.

The 4-week bill is a cash-equivalent instrument included within the realm of money markets. In theory, a financial agent has the equal choice of lending to the US government at the bill rate, or lending to the Federal Reserve at the RRP rate; both options collateralized by US government paper.

If the bill rate, then, strays too far it should be brought back in short order because the RRP rate is fixed by monetary policy. You might be forgiven, then, for thinking that last week’s bill trading wasn’t really noteworthy, declining only close to the 75 bps floor. The problem for the Fed, as well as all the rest of us (indirectly), is that they changed the RRP “floor” almost two weeks ago to 100 bps. 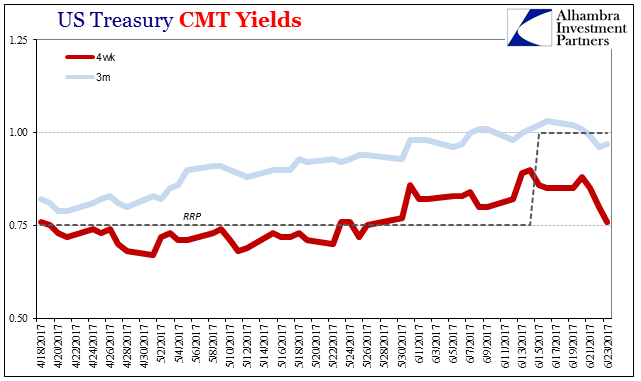 In other words, the 4-week rate is not only well below the current “floor”, it is now threatening to sink below the last one, too. To make matters more interesting, in trading today the 3-month treasury bill yield was quoted at 95 bps, joining the shorter one in embarrassing the Fed. It isn’t merely trivia, as I wrote Friday (subscription required):

It isn’t immediately clear for most people why this matters. They might be otherwise tempted to just see an anomaly and leave it at that. These things are important, especially in the context of what the Committee intends to accomplish. Among the criteria for any benchmark is predictability; meaning not the ability to forecast what the rate will be tomorrow or next year, rather that it behaves in way that all market participants clearly understand.

What kind of liquidity environment can exist where the Federal Reserve doesn’t directly factor in the treasury bill market? What does that say about much more than RRP’s, especially as it relates to “dollars”?

It is, in fact, one of the issues Fed officials contemplated to the point of concern before they ever started their “exit.” In 2014, they had debated exactly how they might achieve “rate hikes.” The old way of doing things, a single federal funds target, was no longer an option. Instead, they designed a “corridor” in recognition of what they should have known a decade ago (if not much longer); the money world is much more complicated than anyone used to believe.

Having been stuck at the zero bound since December 2008, however, there wasn’t really any more than theory as to how it might work, particularly at the floor. The Fed’s prior real-world experiments in that regard had proven totally ineffective (IOER). And though they tested the RRP on numerous occasions leading up to the first “rate hike” in 2015, predictably declaring each and every one successful, those weren’t realistic assessments (thus their concern?).

For the July 2014 FOMC gathering, what apprehensions were expressed were largely sanitized in the public document (meeting minutes) but still clear enough:

However, many other participants thought that such a strategy might result in insufficient control of money market rates at liftoff, which could cause confusion about the likely path of monetary policy or raise questions about the Committee’s ability to implement policy effectively.

Indeed, in a follow up research project, FRBNY staff wrote of significant “dispersion” among money rates earlier this year. Their suggestion appears further confirmed in the current bill market:

Based on these data and on theoretical modeling, Darrell and Arvind conclude that monetary transmission may be less efficient than it was before the crisis. As a result, they expect that, as the FOMC increases the federal funds rate over time, other interest rates might not rise one-for-one with it.

To put it bluntly, the Federal Reserve is starting to get the idea that maybe it’s not the center of the money market universe, and may only be one factor among many others (none of which policymakers seem to understand, but some may be getting closer to). It’s one thing to write about it in terms of basis swaps of one kind or another, even the GC repo rate that for almost the whole last ten years has been out of whack. But to find it in the 4-week treasury bill (now 3-month, too) and to such a huge degree is a direct and negative commentary on the RRP and thereby the idea of “rate hikes.”

I use the quotation market not just as a literary device to draw attention to the concept; they go right to the definition and use of those specific words as for what they are supposed to mean and why (the Fed is in charge of everything). Right now, apart from the federal funds rate, there isn’t a whole lot that suggests “rate hikes” are in effect, a contrary (for the mainstream) result that has created all kinds of confusion about what is going on and why.

In general terms it is just this simple: the Fed isn’t what you have been told it is, really not all that important or central. Once you come to that realization, the last ten years start to make a lot more sense (especially QE’s). I have often wondered in the three years since that 2014 meeting if FOMC members’ corridor concerns were about the market, or what it might mean to truly grasp that their own place in it wasn’t what they thought.

What is actually taking place in bill markets are these other “dollar” dimensions, the distinct liquidity preferences that remain no matter which way the Fed goes proving the greater independence of money from policy. In the specific case of T-bills, we can easily surmise collateral (why was gold slammed this morning?).