Despite Mario Draghi’s supposedly misinterpreted comments earlier this week, there are global indications that the best of this round has already been reached. Policymakers are always going to claim things are improving, that much is given. But there is tremendous difference between that and what has occurred, especially if it is indeed rolling over worldwide.

The earliest indicators for China’s economy in June signal that the manufacturing sector may be poised to decelerate, while other challenges loom in the second half of this year.

Small- and medium-sized enterprises showed the lowest level of confidence in 16 months, a gauge of manufacturing drawn from satellite imagery slumped, and conditions in the steel business remained lackluster.

At the center of the story is as always crude oil. There are, of course, direct effects of the ups and downs (more down than up) in the energy market. As the price of it rises there will be more exploration, drilling, production, and transportation required. Some of that has already happened, and accounts for some part of this economic recuperation.

The larger effects are in sentiment, or at least the kind they might measure in PMI’s or surveys. It bears repeating that when the global downturn arrived in early 2015, economists worldwide assured everyone not to worry. They had several plausible reasons for taking that position, flawed as they were. Overall, however, especially from a US perspective the big contrary indicator was WTI.

Dismissing it as a mere “supply glut”, actual economic agents especially in industry would have known better. Even if these important marginal changes weren’t completely understood, it didn’t take any special knowledge or complex series of regressions to link the crash in oil to reduced demand for goods globally. In that way, oil became the best real-time indicator for economic demand and its overall direction no matter what Janet Yellen would say.

The same has likely held true on the upswing. Oil prices bottomed in February 2016, rose steadily for several months and then for the rest of last year held on to those gains -with a slightly higher price bias to top it off. Translating that roughly into global economic demand, it seemed as if there was a positive economic trend developing.

If we add several of the other elements of “reflation”, it’s not difficult to surmise the basis for economic improvement late last year and early in 2017 – as well as why it may have reached its near-term end just a few months into it. Oil has simply failed to follow-through on the promise, remaining well-below the prior peak from three years ago this week. Worse, it has since February 2017 turned lower again.

There is once more no hiding from the problem. The fundamentals of oil are all negative, therefore businesses that might have in some part based their decisions on interpretations of its rebound would no doubt return to a far more cautious state without that rebound continuing. Mario Draghi intimates the global economy is moving again, but oil demonstrates otherwise. Credibility remains all on the side of the commodity.

The feedback effects would certainly be enough, given the visibility and recent history of oil, for a possible end to the small upturn.

The latest estimates from the US EIA with regard to oil inventories, now the central focus of oil markets, are not optimistic. Crude inventory levels which had been drawing down in somewhat assuring fashion have stopped doing so. As of the latest estimates for last week, crude stocks remain higher this year than at the same time last year. The relative comparison, if demand was truly rising in reflation, would have reversed by now and further indicated that it would surely continue. 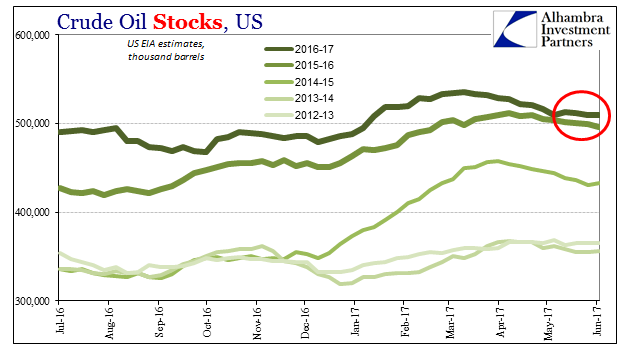 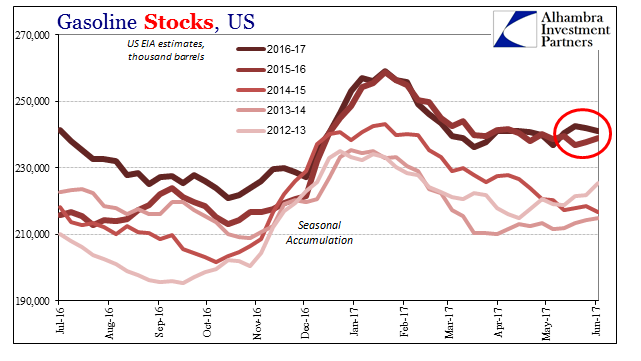 The same unfavorable comp has persisted in gasoline, as well. The physical commodities are simply not being used near fast enough. The promise of the initial oil rebound hasn’t come to fruition, as in many respects nothing has changed. That’s the overall commentary that seems to be more and more applied globally in a real economic sense. 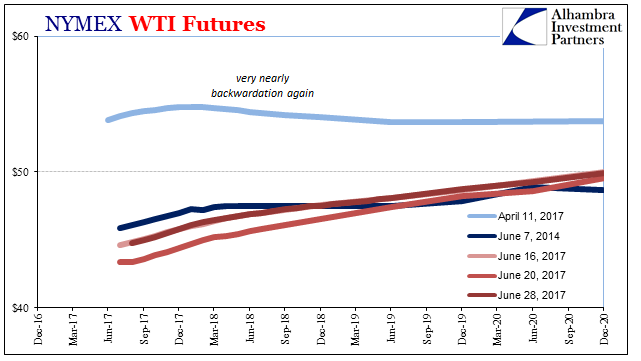 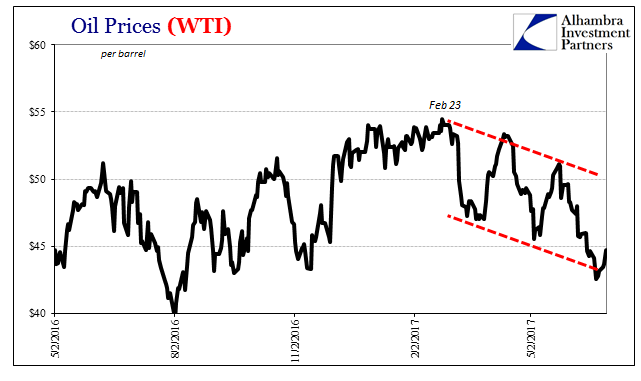 Now the futures curve sits in steady contango all over again, having gained the positive slope in the last selloff (of what looks like a third liquidation episode in just the last four months). That’s another negative sign for oil fundamentals, and therefore the guidance of oil prices in economic terms.