Factory orders (unadjusted) in May 2017 were up 6% over those estimated for May 2016. The growth rate was better in that month compared to the one before, but not any faster than the rest so far this year. Year-to-date, factory orders are up just 4.8% from the first five months of 2016.

Seasonally-adjusted, the Census Bureau estimates that orders have fallen in the past two months, rather sharply in May. Without getting into the methodology, the differences can be reconciled as a possibly stalling rebound. The unadjusted series tells us that factory orders are up compared to last year, while the adjusted data suggests most or all of those gains occurred last year rather than of late. 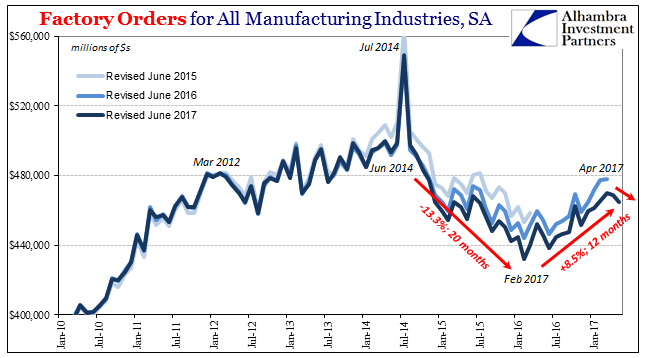 We are moved to that conclusion even by the unadjusted annual gains. At just 6%, there is so far no actual, meaningful acceleration indicated. The condition is too much like 2014, and nothing like 2011. After contracting for an astonishing 22 straight months (and 23 out of 24), factory orders should be following a path more like the middle 2000’s.

There appears to be gathering a prominent “headwind” for industry, and manufacturing in particular. The auto sector may be undergoing a cyclical process, swinging from sustained solid growth to more uneven and uncertain conditions. With low sales prevailing again in June, what was once a unique source of positive expansion is already a small but significant drag.

The potential consequences of this development have even caught the attention of Federal Reserve officials, those who are typically surprised by these inflections (as they were in this case, what with a 4.3% unemployment rate inconsistent with flagging vehicle sales). In their June 2017 policy minutes, released today, the FOMC acknowledges:

Automakers’ assembly schedules suggested that motor vehicle production would slow in subsequent months, but broader indicators of manufacturing production, such as the new orders indexes from national and regional manufacturing surveys, pointed to modest gains in factory output over the near term.

It’s the combination of those factors that is concerning, meaning that given almost two years of contraction there should have been long before now robust rather than “modest” gains in factory output. To potentially peak at “modest” is, again, too much like 2014. If the auto sector does slow even further, as all signs indicate, then 6% gains are (like orders for durable goods, a component of factory orders) unfortunately the best we might hope for.

That would actually help explain not just the current economic condition but also why it never changes. Lackluster growth at best doesn’t achieve sufficient force to overcome (hysteresis) the always-present but currently amplified negative factors (such as liquidity preferences). It isn’t nearly enough to turn especially industrial business (but also service sector firms who are attached to moving and selling goods) from continuously watching costs toward instead trying to manage growth. 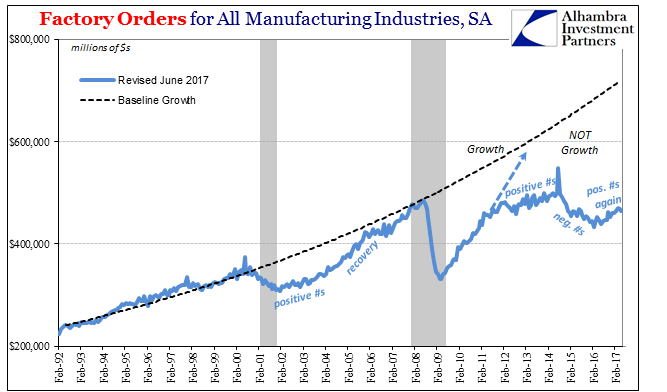 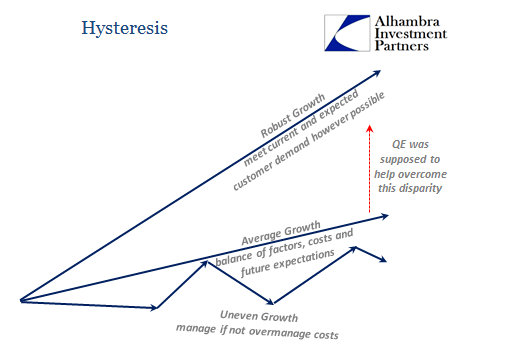 In the former condition, headcounts and hours are watched incessantly to keep costs down so that profits can be achieved in what is expected to be a consistently low revenue growth paradigm. In the latter, businesses prioritize meeting not just current customer demand but also what that might be in the future in whatever way they can, even if it means greatly expanding labor utilization. This is what monetary policy sought to achieve with especially the four QE’s (and in Europe other experiments as well as a QE), to get businesses (sentiment) believing that the future will be better (inflationary) so as to overcome and alter for the better this internal focus. 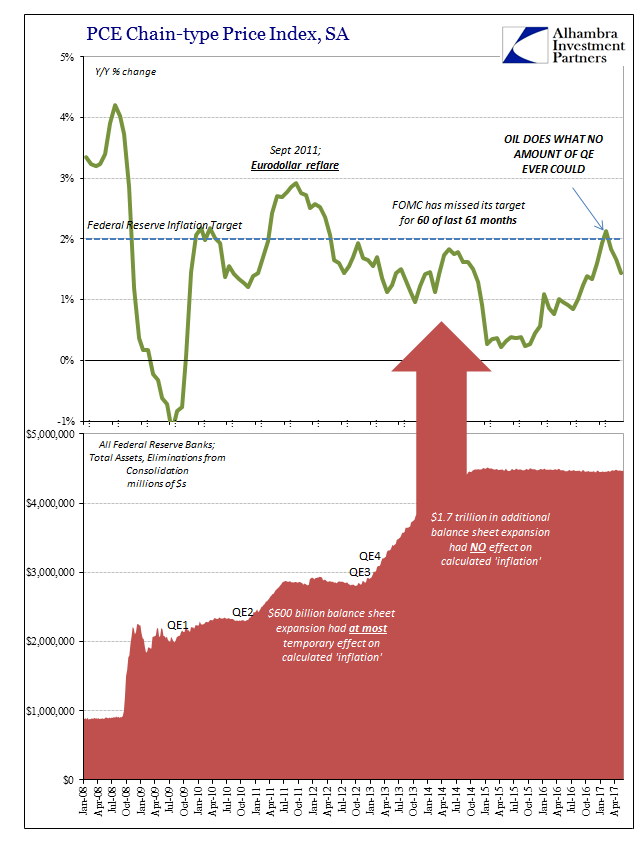 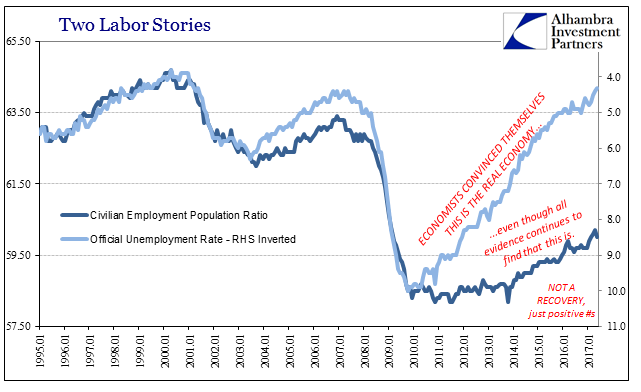 It’s also why the 2011 re-crisis was so permanently damaging. Up to that point, though the Great “Recession” was unusually large and deep there was at first at least a plausible recovery pathway. In terms of liquidity, even the largest corporations were in late 2008 at risk of catastrophic failure due to the banking/monetary freeze. That meant firms like GE (as Hank Paulson tells it) who could no longer draw on standby credit from banks were left to self-underwrite their own liquidity conditions should the economy falter again – as it did.

Labor is both the largest expense as well as the largest liquidity draw for any firm, but especially in industry. Therefore, the events of 2011 showed firms that the downside liquidity risks remained high despite QE’s (two to that point), in addition to another “unexpected” economic downturn that further exposed those risks. The economy became locked in this insufficient situation where nobody wants to hire (or expand) for future growth because of the dangers associated with being wrong about future growth (which has been proven repeatedly). 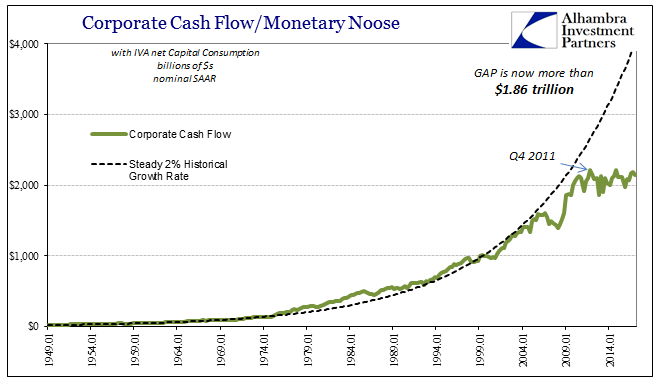 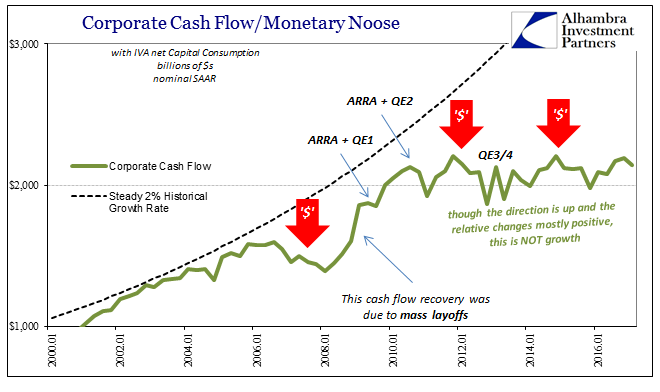 The only true increase in aggregate corporate cash flows over the last ten years was when businesses in the US were starting in November 2008 (when systemic liquidity was at its worst) for six months cutting an average of 700k jobs each and every month. It has been a lesson that stayed learned largely because monetary policy has done nothing to alleviate liquidity pressures (proven by more than just 2011), preferring instead the attempted manipulation of sentiment.

Spare cash is, from the view inside of boardrooms, better either hoarded or “invested” in share repurchases. Committing to expansion is under these circumstances (liquidity preferences) the highest risk scenario, meaning high risk and little expected return. Thus, the world remains stuck in liquidity preferences no matter what – at least until someone actually and directly addresses the real monetary problem.