It is hypocritical, I suppose, to claim that Janet Yellen is irrelevant while at the same time constantly writing about the oblivious things she says. The Fed doesn’t matter but we need to obsessively focus on monetary policy anyway. Often the reasoning is upside down. By that I mean, we hope that by highlighting how little authorities know that someone somewhere will finally run with it. Step 1 on the road to recovery is changing the very idea of a central bank, and so obsessing about its missteps is part of the package.

There are other considerations, too. Though while QE, for example, achieved nothing of monetary value, it was not itself nothing. The FOMC through its Open Market Desk at FRBNY did purchase trillions in securities, and continues to this day to reinvest maturing issues. It didn’t raise the effective global “dollar” supply, but it did distort certain important mechanics.

Unwinding the Fed’s balance sheet holds the potential to do the same. And it isn’t at all one for one, meaning that in whatever way QE did things, we can’t simply assume that undoing QE will do the same things just in the opposite direction. If only it were that simple. I suspect in five and a half years’ time when the 2017 FOMC transcripts are released they will have recorded a great deal of angst on policymakers’ part.

The act of undoing a QE transaction for the government is simple enough, but what effect will it have on banks? Bank reserves are for the largest dealers a big source of liabilities. Reduce that source and something has to happen, though we don’t know what that might be. Will banks be forced to sell assets? Might they attempt to replace those reserve balances by borrowing in money markets that today are quite barren?

I suspect that is one motivation behind the Treasury Department’s mid-June proposal to change the SLR. You have to believe that the Fed and Treasury have discussed various ways to work together so as to reduce or eliminate any seriously deleterious effects on money markets (including, if I am permitted to wildly speculate, using Treasury resources to almost “sterilize” the Fed’s balance sheet unwinding in a manner not dissimilar to what those agencies used to do together in the 1920’s and 1930’s with gold). If the Treasury Secretary believes that a softer SLR could lead to unlocking trillions for money dealers, it would be quite fortuitous (though, as noted yesterday, one that it is unlikely to come close to reaching) that it could achieve that goal just as the Fed reduces trillions in bank reserves.

The possible idea highlights what is the primary unknown; how will the private money market behave as banks are reduced of further public liabilities? When QE1 was first contemplated this was an easy answer – the world would be like pre-2007 with private money markets fully restored and on their own flourishing. Global money is today in a far darker state, one with more than a tinge of permanence about it. 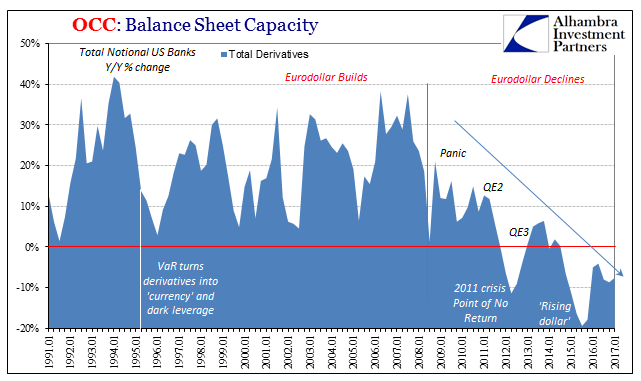 While myself and my colleagues will continue to ponder and analyze the possible ramifications of balance sheet adjustments, including how regulatory rules may end up forcing banks to actually buy even more UST’s to meet liquidity requirements, that’s not really my point here. My purpose is again of a broader nature, meaning that our current state is not one that was ever envisioned for either monetary policy exit or even sustainable social cohesion. Growth solves a lot of problems; problems are only amplified when there is and has been none.

As I wrote earlier today, “dovish” or “hawkish” is the wrong way to think about these things. Policymakers are still assuming something like normal if in a shrunken state. Janet Yellen said today:

Because the neutral rate is currently quite low by historical standards, the federal funds rate would not have to rise all that much further to get to a neutral policy stance.

That’s what the eurodollar futures curve has been saying for years now, as the UST curve. There is no conundrum. But there is still margin for debate, only about whether that kind of “normal” is even still achievable. To put numbers on it, Yellen and the FOMC are thinking 3% is the new neutral for federal funds (setting aside objections to the whole philosophy and technical reach of a neutral or natural rate) when in the past it has been 5% or 6%. That says something very important about our economic state, that “something” still isn’t quite right.

Where we truly are today is continuing to decipher just how wrong the economy will stay for the foreseeable future. It is here that the bond market, as eurodollar futures, are still deciding not “hawkish” or “dovish” but rather somewhere between “somewhat wrong” and “really, really wrong.” In truth, Yellen herself isn’t so sure, either:

There is, for example, uncertainty about when — and how much — inflation will respond to tightening resource utilization.

The unemployment rate is all she has left to base a somewhat normal future projection on. But after several years, there is no evidence it is gives us a valid sense of the real economic picture; and more than a little doubt that it ever will. Because it has gone on so long this way, Yellen is forced to admit what is plainly obvious. 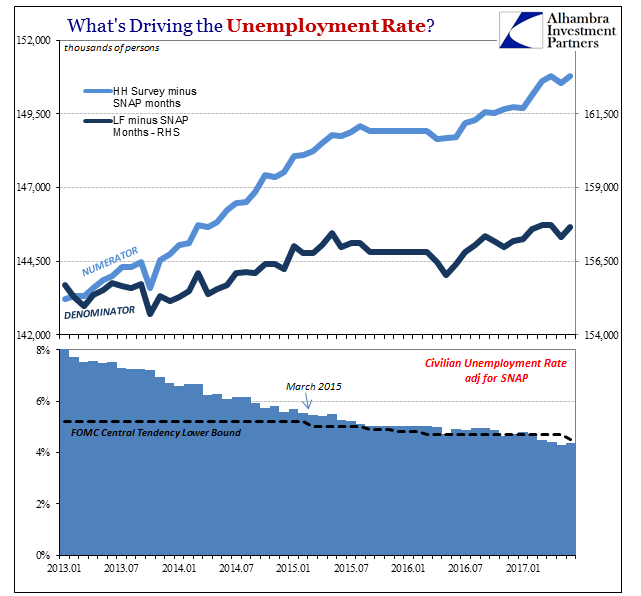 What that means in the real policy context is again neither “hawkish” nor “dovish.” It is whether or not all these changes in mechanical reversals will be done under close-to-normal, conditions that stay really, really, wrong, or something in between. There is no scenario left where this all takes place, as it was meant, under a real recovery with actual growth, so in the end there may not be much meaningful difference between semi-normal and very wrong. Does anyone want to bet the Fed gets it right, both economy as well as policy? Or might it be prudent to act as if they once again manage to make a bad situation that much worse?

In other words, risks are rising even more than they already have. On that basis alone, there is no conundrum – just as Yellen today was not “dovish.”