China’s Ghosts Are A Future Property

China’s Ghosts Are A Future Property

The term “ghost city” is a loaded one, often deployed to skew toward a particular viewpoint. In the context of China’s economy, it has become shorthand for perhaps the largest asset bubble in human history. While that may ultimately be the case, in truth China’s ghost cities aren’t about the past but its future.

There is a great deal that is misunderstood about the country’s path toward urbanization and modernity. A lot of it is simply the scale; it is incomprehensible that 300 – 500 million people could be removed from rural subsistence to urban industry, and to do so in such a short period of several decades.

These are no John Maynard Keynes’ pyramids in the desert, or the stuffing of coal mines with sacks of gold to be dug up. In other words, strictly speaking the ghost cities are not “stimulus” for a Chinese economy on the slowdown to get back up. They are the intersection of idiosyncratic factors with these enormous demographic challenges.

For example, only the government can own land in China. What is “owned” in the real estate market is the right to “land use.” And it is a temporary one, typically only two years. Therefore, since the property is owned by the state, meaning there are no real estate taxes, and you only have a short period of time to do something, there is every incentive to build right now and wait for demand to catch up for however long that might take. In China, there is always a potential ocean of demand.

The real issue, then, is one of time. If your baseline is pre-2007 China “miracle”, then rabid construction makes sense for rapid, sustained growth that will narrow the timeframe considerably between construction and use. If the actual baseline turns out to be far different, then questions about asset bubbles arise due to what become obvious incongruities. Vacancy does matter. The term “ghost city” becomes ubiquitous with all its negative connotations.

Even the most egregious build-upfront ghost cities are becoming populated. As noted last week, the most notorious of China’s cities laden with empty downtown skyscrapers, Kangbashi, is more complicated than its status of waste exemplar. The largest prefecture-level city, Ordos, is inhabited by 2 million Chinese. Kangbashi itself straddles two different administrative districts, crossing the Wulanmulun River, the administrative divide.

The downtown core, so to speak, lies on the north bank, while the sprawling mix of urban housing complex is to the south. Officially, Kangbashi doesn’t exist anywhere as a city. The actual Kangbashi piece, the north side, has filled up considerably (estimates differ often drastically by how much) so as to allow local government officials to petition the capital for at least county-level city status.

It would leave the south side, Yijinhuoluo, left out of the official equation. On any satellite picture, there is no telling one from the other except by the river flowing between them. But while Kangbashi can hope for city status, Yijinhuoluo is a long, long time from it. Thus, China’s most famous ghost city might not be one anymore, as the maps are redrawn by shifting levels of vacancy.

In one interesting paper published in 2015, researchers from Baidu’s Big Data Lab and Peking University set out to find these ghost cities. Using Baidu positioning data, the authors could estimate vacancy by how much or how many people in particular areas were using Baidu. The paper specifically identified 20 that qualified under their specific terminology, but also that the total number was “more than 50.”

What the results might be five or ten years from now if researchers repeat their study will be up to China’s economy, and by extension “global growth.” If the world finally does recover from the Great “Recession”, there may not be any. Even if China can actually rebalance without industrial growth, the list should get much smaller. “Ghost city” in China is about its future, not its past.

It is within this context that China’s economic statistics can be appropriately analyzed. The mainstream Western media is filled with stories today about China’s “robust” and “resilient growth.” They feel good because Industrial Production rose 7.6% in June 2017 instead of 6.5% as economists had expected. Retail Sales were up 11% year-over-year, the highest growth rate since December 2015. Not that it matters, but China’s GDP estimate for Q2 was 6.9%, another statistic taken optimistically. 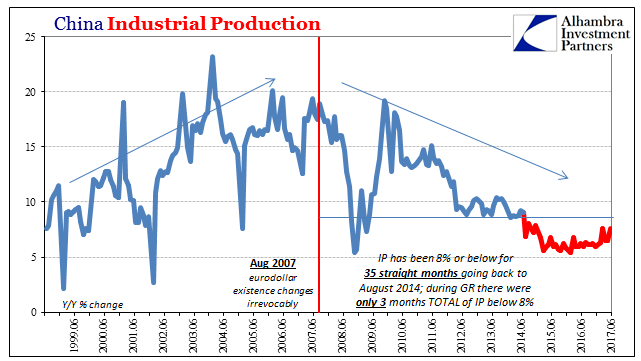 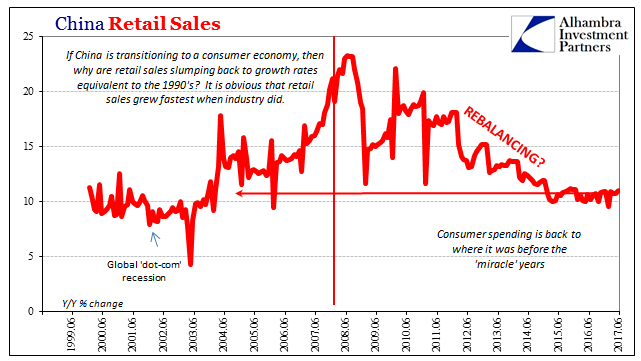 A more accurate description would note that Industrial Production in China has been 8% or less for 35 straight months. There isn’t nearly as much difference between 6.5% and 7.6% as you might be led to otherwise believe. Go back to September 2014 when IP for August that year fell below 8% for the first time since the Great “Recession.” It was an almost shocking (actually written and described that way in the media) level of decline and deceleration that today is treated as commonplace.

The same has occurred in Retail Sales, where at 11% economists are actually suggesting this is a robust result that confirms China’s “rebalancing” is proceeding as it should. That’s not even to the same level of growth as the middle 2000’s when China’s consumers were an afterthought in its industrial march forward.

This isn’t to say that there might not be improvement in the economy this year. There clearly is a slight uptick in activity even in Industrial Production. This molehill, however, is being made into a mountain that disappears in context. It’s easy to suggest 11% Retail Sales growth is terrific given our own growth in Retail Sales hasn’t reached 6% once in five years. 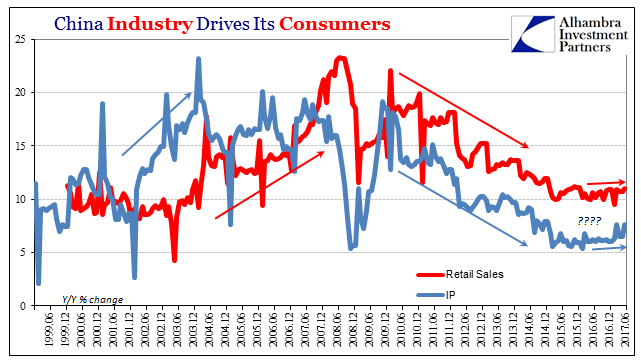 Eleven percent doesn’t fill up 20 or 50 ghost cities near quick enough, however. That is the emerging verdict of construction as demonstrated by Fixed Asset Investment growth rates. Private FAI, which is all that matters for urbanization, last year crashed and for two months in the middle actually contracted (in non-accumulated yearly terms). Now in somewhat of a rebound, Private FAI appears to be stalling at around 7-8% growth, about a third of the rate when last in 2012 ghost cities were not ghosts but near-future cities. 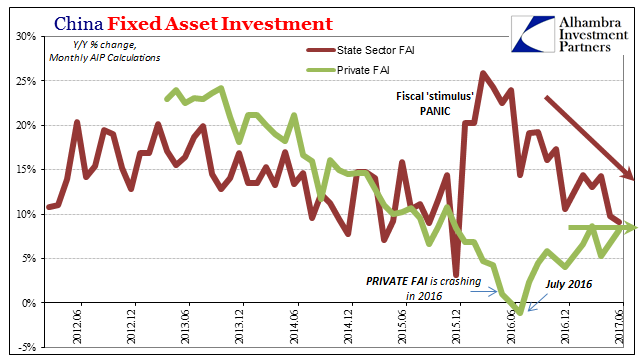 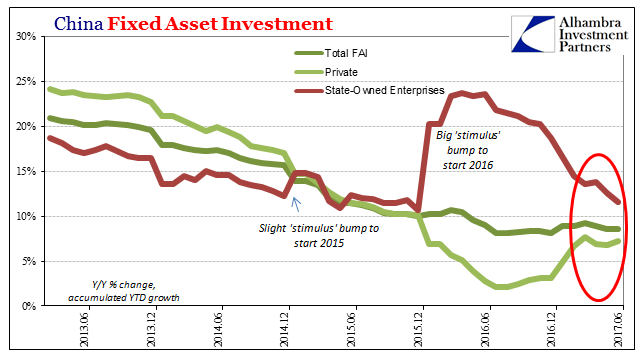 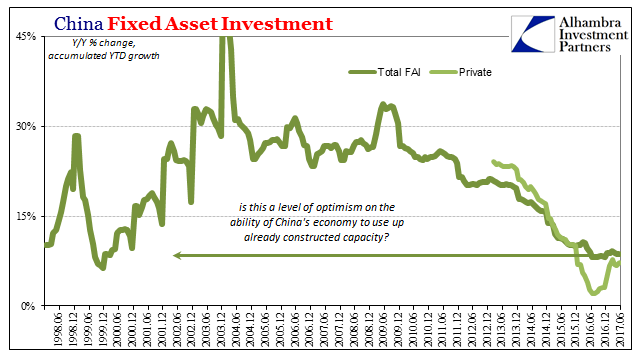 Almost surely expecting larger returns, infrastructure “investments” through State-owned Enterprises has cooled off significantly. The result is total FAI which is, like Retail Sales and IP, stuck sideways and for a year now at its lowest level in decades. No acceleration, little overall momentum.

If the catalog of ghost cities is anywhere near accurate you can appreciate why that is. The media can tell us that China’s economy is robust, strong, or whatever positive label. The on-the-ground situation in that country is quite different. The issue isn’t ghost cities but how long they might stay that way. At these economic levels, where once even 7% GDP growth used to be considered China Recession, the inventory of unsold and unoccupied cities isn’t likely at all to change nearly fast enough.