There was a funny sort of Congressional exchange all the way back in November 2005 that in a weird way defines our world today. At the nomination proceedings on whether to confirm Ben Bernanke as Alan Greenspan’s successor, Senator Jim Bunning of Kentucky wanted the prospective Fed Chairman to first answer for M3. It had become something of a conspiracy theory, but one with enough roots to reach this political level of mainstream thought. The Federal Reserve had under Greenspan in late 2005 announced that by early 2006 it would no longer keep an M3 money supply statistic.

Almost immediately, the central bank was accused by critics of trying to hide inflation. It was at that time the depths of the housing mania, where truly enormous asset bubbles can only come from out of control money conditions. The Fed would seem to have had significant interest in suppressing any data, particularly its own, that might connect one to the other.

Senator Bunning, however, wasn’t truly interested in M3 other than perhaps a soundbite for the evening news (which itself has been sort of discontinued in the same evolutionary way). He specifically asked the nominee about the central bank’s “decision to keep M3 from the public.”

Bernanke maybe should have become a lawyer rather than an economist. Like Greenspan, his true talent had nothing to do with economy or money. Thus, he was perfectly suited for the Federal Reserve. In response to Bunning, Bernanke merely restated the previously published fact. “The Federal Reserve will not withhold the M3 date from the public; rather, it will no longer collect and assemble that information.”

It wasn’t as if the FOMC had voted to keep information for itself. The committed had instead decided not to bother collecting the data that they hadn’t used in years, decades even. It was for monetary policy nothing but an expensive headache.

It tells us a lot about monetary conditions at that time, as well as how it would all shortly thereafter start to unravel. Under Greenspan, the Fed had been transformed from a monetary agency to something else. Exactly what else is still left to conjecture and speculation, but in raw terms the central bank was neither central nor much of a bank.

It was at least correct not to put too much faith in M3. The estimate had become woefully inadequate and incomplete for its task of tracking broad money. Consisting of large time deposits but more so, as time progressed, repurchase agreements and eurodollars, it was at best the slightest tip of the monetary iceberg particularly those latter two parts. The Fed did not record repos, merely those it could find; it did not estimate the whole of eurodollar deposits, only a small amount that fell within very specific definitions.

To get M3 right would have meant considerable effort. Running with discretionary policy (meaning a blanket assumption that if the PCE Deflator behaves, then the minor changes to the federal funds rate must be monetarily correct), however, the Federal Reserve didn’t believe it at all necessary despite the global economic experience during the dot-coms (boom and bust). Even so, there was still at least some hint of what was going on in the imperfect M3. 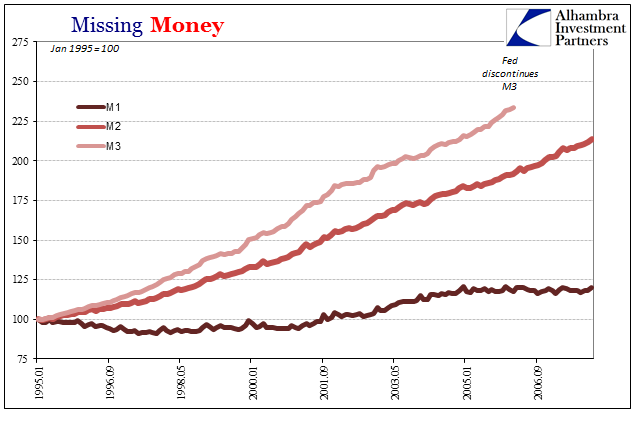 Throughout the bubble age (dot-coms as well as housing), M3 grew at a much faster rate than M2; which grew at a faster rate than M1. With each including as a subset all of the other beneath it, we know what it was that was driving visible monetary growth. The further you go from the monetary base, the more of global banking gets captured, particularly interbank transactions and behavior where dynamic banking matters rather than the targeted rate for federal funds. It was the stuff more so out of sight that was really cooking, with the Fed only able to capture a glimpse of it in M3, still enough that should have stimulated some official level of inquisition.

But if there was to be no investigation beyond M3 in late 2005, there really was no excuse after 2008. Quite conspicuously, everything has been inverted. The more esoteric stuff that was expanding rapidly has been moved instead to the bottom; while now on top of the growth rates is the most basic monetary definitions, starting with bank reserves, those byproduct creations of Large Scale Asset Purchases (QE). 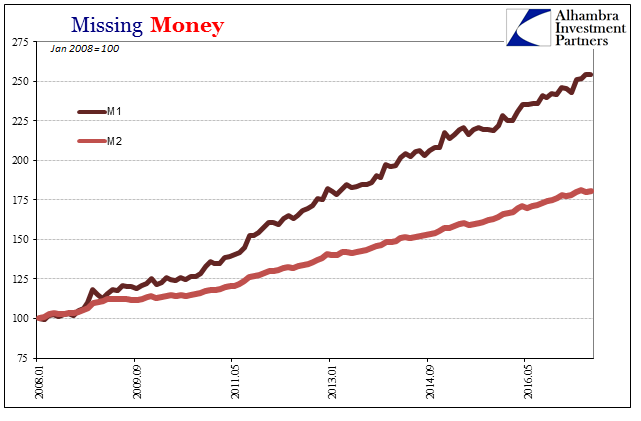 Since we don’t have M3 anymore, we are forced to produce our own alternate to really fill out the picture above. If that particular monetary statistic started to get into the interbank, wholesale funding mechanisms, there are others that can be substituted to accomplish giving us the same small taste. Using specific, liquid bank liabilities found in the Fed’s Financial Accounts of the United States (Z1), we can construct a replacement for M3 that is more comprehensive of wholesale funding, if still incomplete overall. 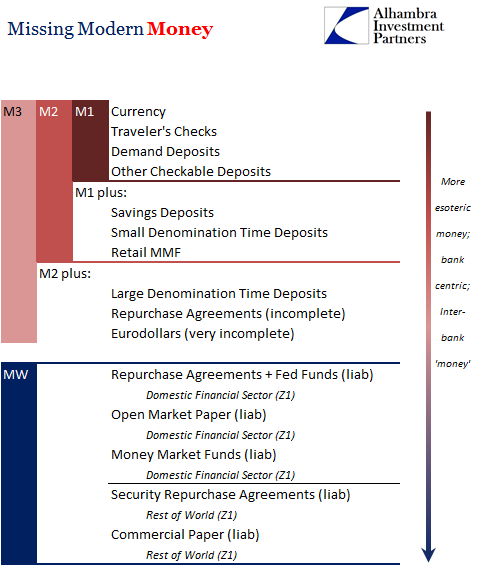 This MW (“W” for wholesale) was practically non-existent to start the 1960’s. There were zeroes in each of the last three categories (above), including MMF’s sponsored by banks. By 1981, however, MW had already surpassed M1. Two decades later, in 2001, it would surpass even M2. At its peak in Q3 2008, the sum of these wholesale categories would be more than $10 trillion.

That immense total still leaves out what is likely the vast majority of the unseen eurodollar market, the trillions in cross border funding arrangements that defy easy categorization by traditional definitions and descriptions. It omits as well all the more completely abstruse balance sheet leverage and monetary capacities in dark leverage (derivatives). Our purpose here isn’t to more accurately produce a useful monetary statistic, it is instead to illustrate that the issue of money is and has been decided almost totally by what is missing – to just point in the direction of where it is that has gone all wrong. 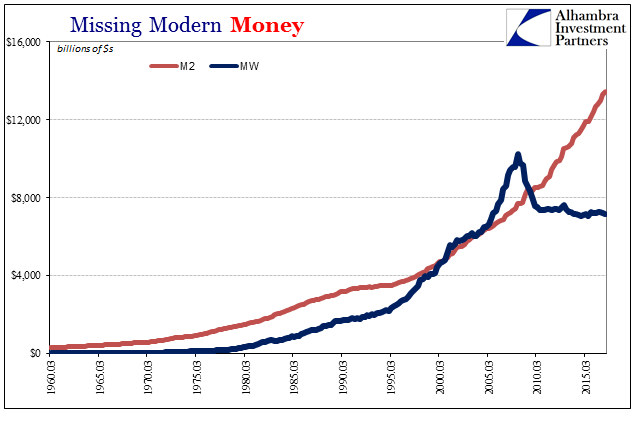 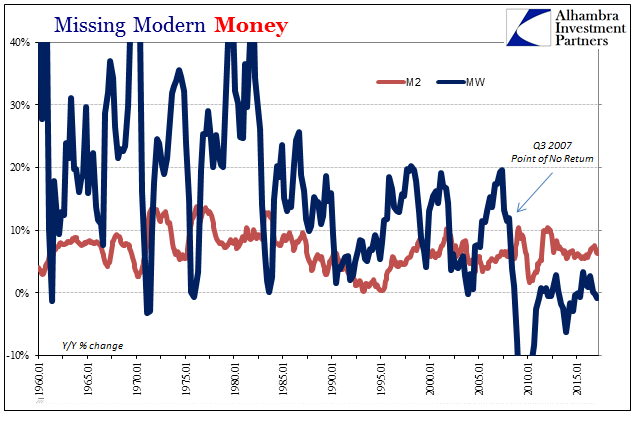 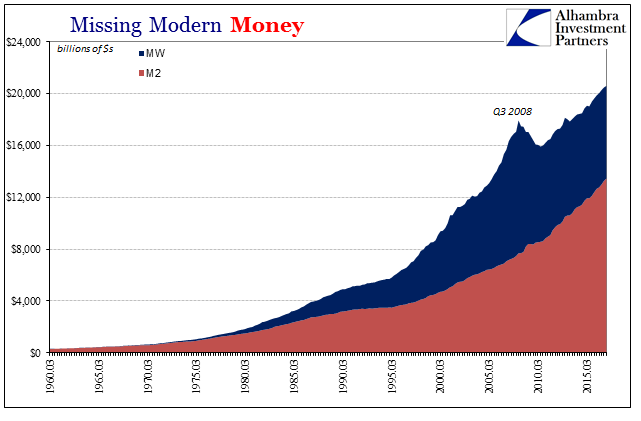 When you add this MW to M2, it starts to look like a familiar and unsettling pattern (recognizing that there is some overlap and double counting in MW of some money market funds). There is a smaller deviation in growth starting with Q3 2007, and then an unmistakable one in Q4 2008 (panic). Since that point, growth has been restarted but not nearly enough to make up for that contraction let alone a sufficient growth rate afterward. In absolute terms MW + M2 is growing again, but in non-linear terms it is like the global economy still contracting. 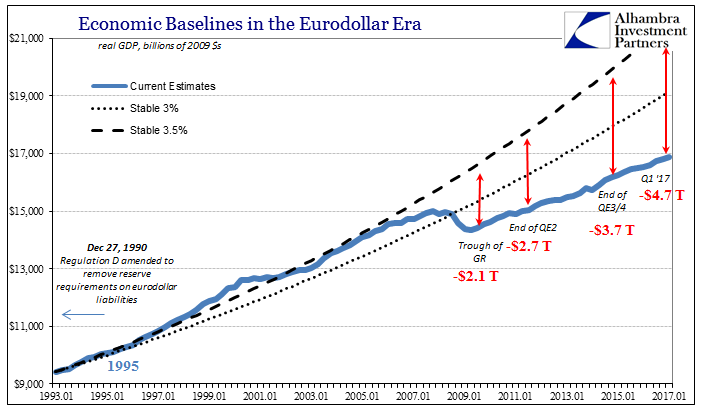 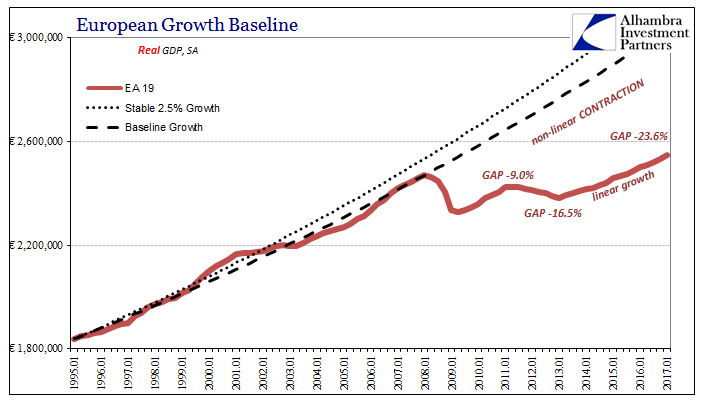 As previewed by M2’s relationship change with M1, the conditions have completely reversed pre- versus post-crisis. Where MW was before August 2007 growing in unbelievable fashion, far more than M3, it is now not growing at all even after reaching its terminal trough around 2014. Instead, it is M1 and traditional money formats that are growing, though, again, not nearly enough to offset the wholesale decimation (MW). 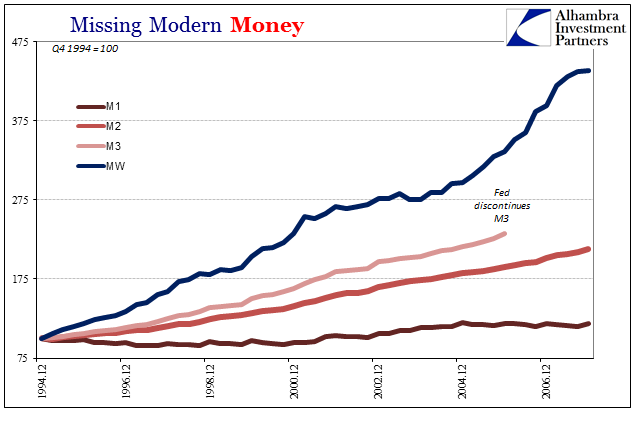 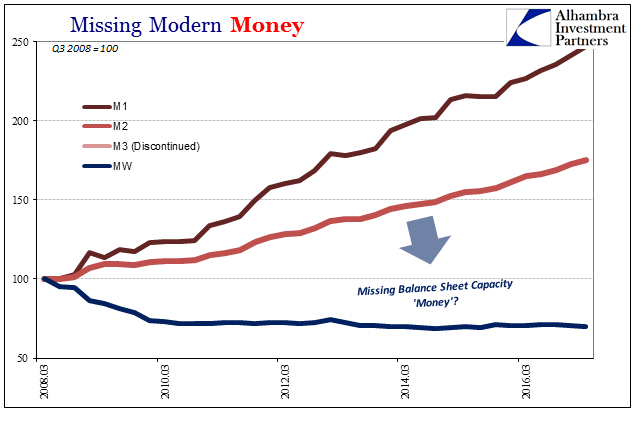 We are left with the inescapable conclusion of missing money. The central bank’s role in this kind of broadened system isn’t clearly defined except as how it is visibly limited to small, simple capacities. By virtue of both inflation and GDP (and bond rates), none of that really matters. It is the wholesale pieces that do, meaning monetary policy has long ago been stripped of relevant monetary capacity. If the Fed seemed so helpless the last ten years, that is because it wasn’t even close to the right place for intervention.

This is true not just of the dollar system (and, again, there is quite a bit left out here in cross-border stuff) but also observed in places like Japan. As noted last week, the Bank of Japan seems to have gone insane ballooning its balance sheet above half a quadrillion yen. But in the widest of monetary terms including the broadest definition (L) it’s as if little has monetarily happened. 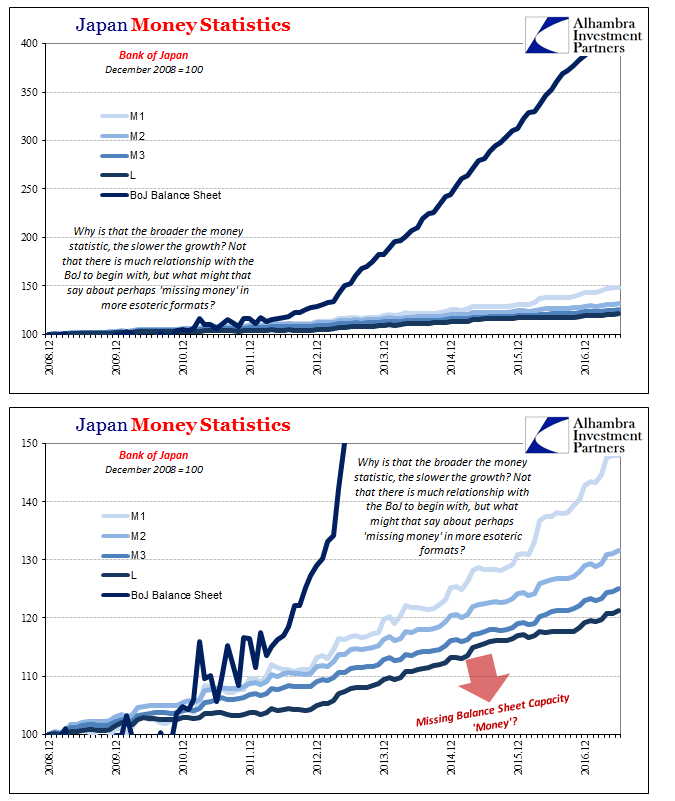 There is a lot that needs to be further stated and clarified, but at this point it will be enough to leave it as a “missing money” introduction for the M’s of the 21st century. All signs point only in that direction, where banks are the center of the monetary universe and central banks one small input in a hidden sea of monetary inputs. The stuff that was all wrong before 2008 in the upward direction is now after 2008 still all wrong but in the opposite one.

Economists and central bankers (redundant) all treat money as a simple economic input not worth their time and effort to completely understand. What we see from just this brief summary is that isn’t the case at all. There is a lot going on in banking that from this view proves at least worth the investigation, with everything now riding on it. Social and political stability are being threatened by prolonged and “mysterious” stagnation, malaise, even depression that officials just can’t seem to explain. Populism is little more than a backlash against an “elite” that can’t perform this basic economic duty.

The Fed should have long before 2005 discontinued M3, though seeking instead a more comprehensive and worthwhile replacement incorporating these truly modern elements. This is but stating the first problem with credit-based money.  It is that which has proved in every way more relevant to the global economic setting than anything Ben Bernanke, or Alan Greenspan, has ever done.